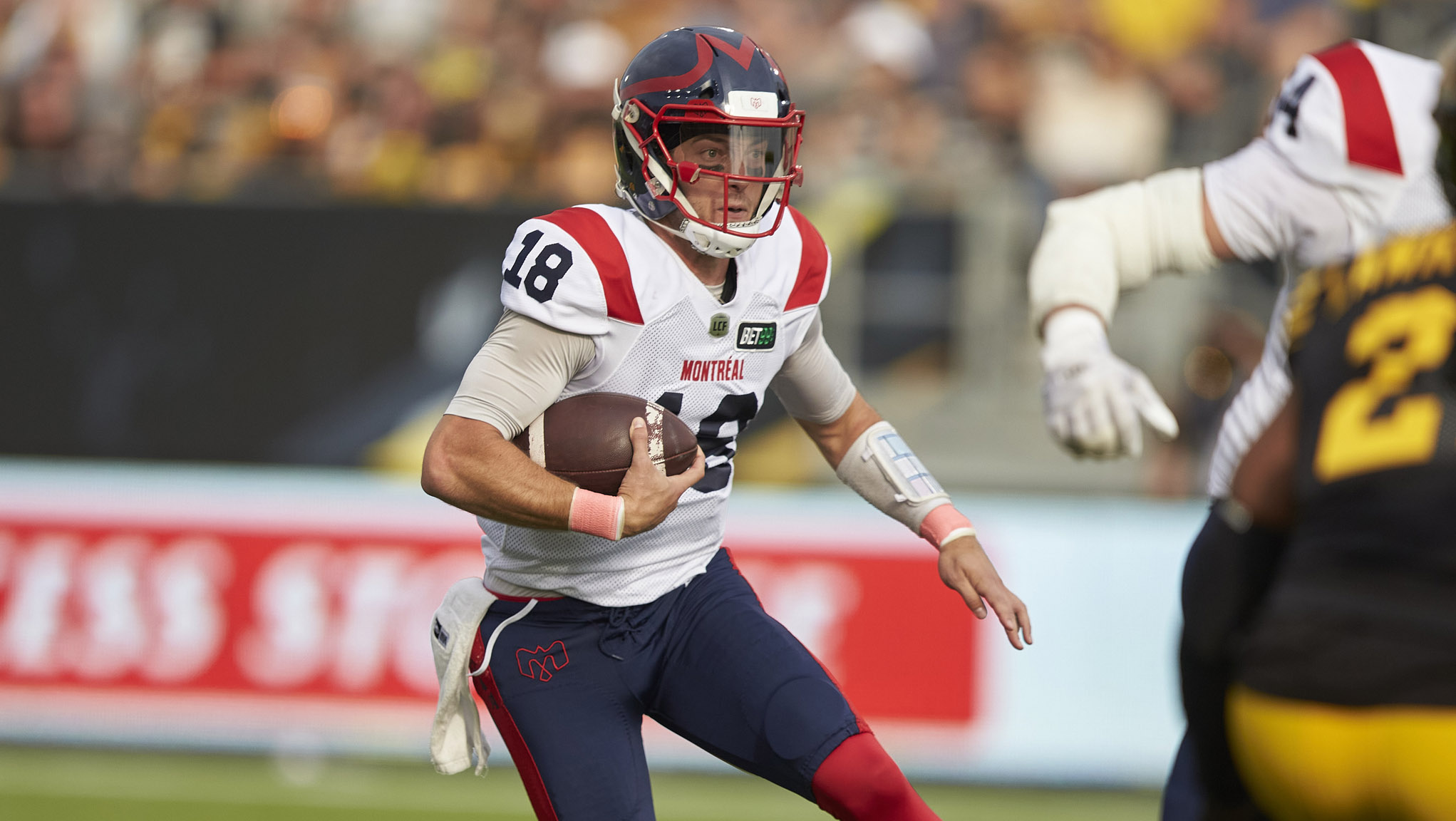 TORONTO — As the Winnipeg Blue Bombers’ win streak continues to grow, Zach Collaros steadies himself atop of our QB Index.

The Bombers’ QB didn’t go out and duplicate his 400-plus-yard game of Week 10, but he did what we’ve come to expect from him all year. Even when the completions or extended drives may be hard to come by, he finds a way to make plays that count when his team needs them. Last week it was an early connection with Nic Demski for a touchdown that had to deflate the Elks. In the fourth quarter, it was letting Andrew Harris finish off a pair of drives that blew the game open.

Week 11 will have some different looks at quarterback, with Vernon Adams Jr.‘s move to the six-game injured list opening the door for Matthew Shiltz and Edmonton’s eyebrow-raising decision to sit Trevor Harris in favour of Taylor Cornelius after last week’s loss in Winnipeg. 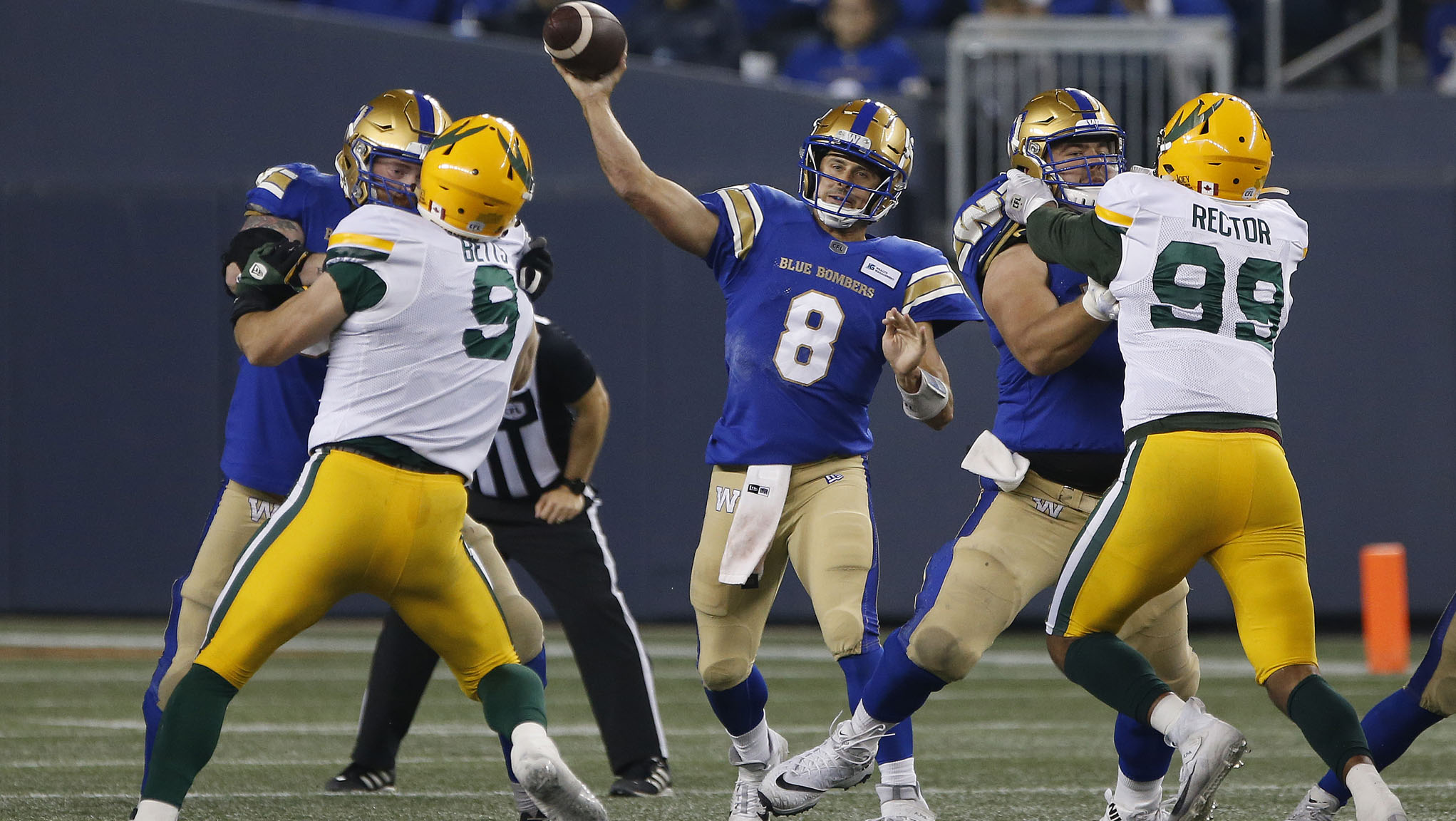 Zach Collaros has remained that cool, steady presence in the Bombers’ offence and has been a perfect fit with the team since he landed in Winnipeg two years ago (Photo: The Canadian Press)

The Bombers are now 12-1 with Collaros as their starting quarterback, going back to the final games of the 2019 season. As Bluebombers.com’s Ed Tait wrote the day after the win, the Collaros trade at the deadline in 2019 “doesn’t just look like thievery because of all the wins, but because his quiet leadership melds so perfectly with what was already in the Bombers locker room.”

Who could have seen any of this coming two years ago, when Collaros made the move from his second to his third team that season?

Reilly comes out of the bye week sitting third in the league in passing yards (2,047) and faces a couple of challenges this week. One is his old friend, Bo Levi Mitchell and the Stamps, who will visit BC Place on Saturday. The other is an adjusted playbook that will attempt to work around the absence of Lucky Whitehead, who is recovering from a broken hand. It’s not like the Lions don’t have the depth to deal with a short-term injury to their leading receiver. Saturday could be a busy night for Bryan Burnham.

Fajardo and the Riders are no doubt using their bye week for some reflection, which will transition into getting to work on finding a way to generate more plays and more points on the board. Fajardo is second in the league in passing yards (2,104) but he evens out with eight TDs and eight interceptions. An injection of Shaq Evans and Duke Williams can’t happen fast enough in Regina.

The offensive punch that once seemed as effortless as watching a boxer work the speedbag isn’t quite there yet for Mitchell and the Stamps, but the wins are coming. With that, there may be no other team happier to be in that logjam in the West Division standings than Calgary. Mitchell has still only thrown for five touchdowns this season, but Ka’Deem Carey has stepped up and helped from the ground, while the Stamps’ defence has shown well in this turnaround. A positive sign for Calgary’s offence: It generated 449 yards in Regina. Add in some more TDs and things start to look familiar for the Stamps.

This list is one that’s tough to reach the upper echelon if you’re not a veteran, starting QB. Bethel-Thompson is making his case to climb here after leading the Argos through the difficult task of playing twice in five days. He wasn’t happy with the offence in the Argos’ win over Ottawa, but there was plenty to smile at in their comeback win over Hamilton. McBeth’s hookup with DaVaris Daniels for that play of the year-worthy touchdown pass was the stuff of an elite QB. Winners of three straight, it’s hard to take the keys out of Bethel-Thompson’s hands now.

The outcome wasn’t the desired one on Thanksgiving Monday, but Masoli showed some signs of productivity against a tough Argos’ defence with his best statistical game of the season. His 45-yard connection with Jaelon Acklin was a gorgeous play, part of a 361-yard passing day that had two TDs and zero interceptions. Masoli added 23 yards rushing, which was his second-highest total of the season, going back to the 26 yards he ran for against Winnipeg in Week 1.

After getting glimpses of the field in games this season, Shiltz will get a game and probably more to himself, with Vernon Adams Jr.‘s shoulder injury sending him to the six-game injured list. While the numbers don’t reveal a lot about the 28-year-old — he’s 105-172 for 1,267 yards, five touchdowns and nine interceptions in his four-year CFL career — Shiltz has seemed poised and confident when he has gotten on the field this year. His play on Monday against the REDBLACKS is a perfect example. Thrown into the game for the final drive, he was 3-3 for 36 yards, rushed twice for 18 yards and orchestrated a game-winning drive to give his team its first win at home this year. Up against a porous Ottawa defence, he has a good shot at a win this week.

You have to wonder if Cornelius is looking at his opportunity to start, the Elks’ schedule and back at his opportunity and shaking his head. He made his debut in Week 7 against the Bombers and threw three interceptions in Edmonton’s loss. Now, with Trevor Harris a healthy scratch, Cornelius gets another crack at them a week after the Elks’ offence was taken apart in Winnipeg by the same quarterback-devouring defence. There are other opponents out there for you, Taylor. It will get better.

Three games into his CFL career, Evans is getting the full experience of a rookie QB. He was great against Edmonton, ran into a Chris Jones-directed offence in Toronto last Wednesday and had his share of trouble against Barron Miles’ defence in Montreal on Monday. While the film on Evans is accumulating and DC’s are no doubt taking a good look at their new opponent, that can go both ways. Evans should have a feel for that Alouettes’ defence this week at home. It will be interesting to see how he responds.