The right instincts are as important as a strong arm when it comes to a quarterback’s survival. A good quarterback knows which receiver will be open on a certain route, senses when to scramble because the pocket is about to collapse, feels the threat from his blindside.

Maybe it’s that same intuition that told Trevor Harris his time as quarterback for the Edmonton Elks was about to end.

“I would say over the last month or so I could kind of sense the shift,” Harris said during a teleconference call when discussing his trade Sunday from Edmonton to the Montreal Alouettes.  “I’ve been around the league long enough (that) I highly anticipated it happening and I truly believe it was the best for both sides.

“It’s pro football. Things that are happening to us are actually happening for us. When we realize that and can grow through the trials and tribulations in our life, that’s when we can really start to grow as people. You’ve just got to be able to roll with the punches.”

Harris comes to an Alouette team that has won three-straight games and is tied for second in the CFL’s East Division with a 5-4 record. He expects to begin practising with the team next week and could dress for Montreal’s Oct. 30 game against Saskatchewan.

» Power Rankings: Here come the Stamps
» Back In The Saddle: Tre Roberson returns to Calgary
» By the Numbers: View passing leaders through Week 11 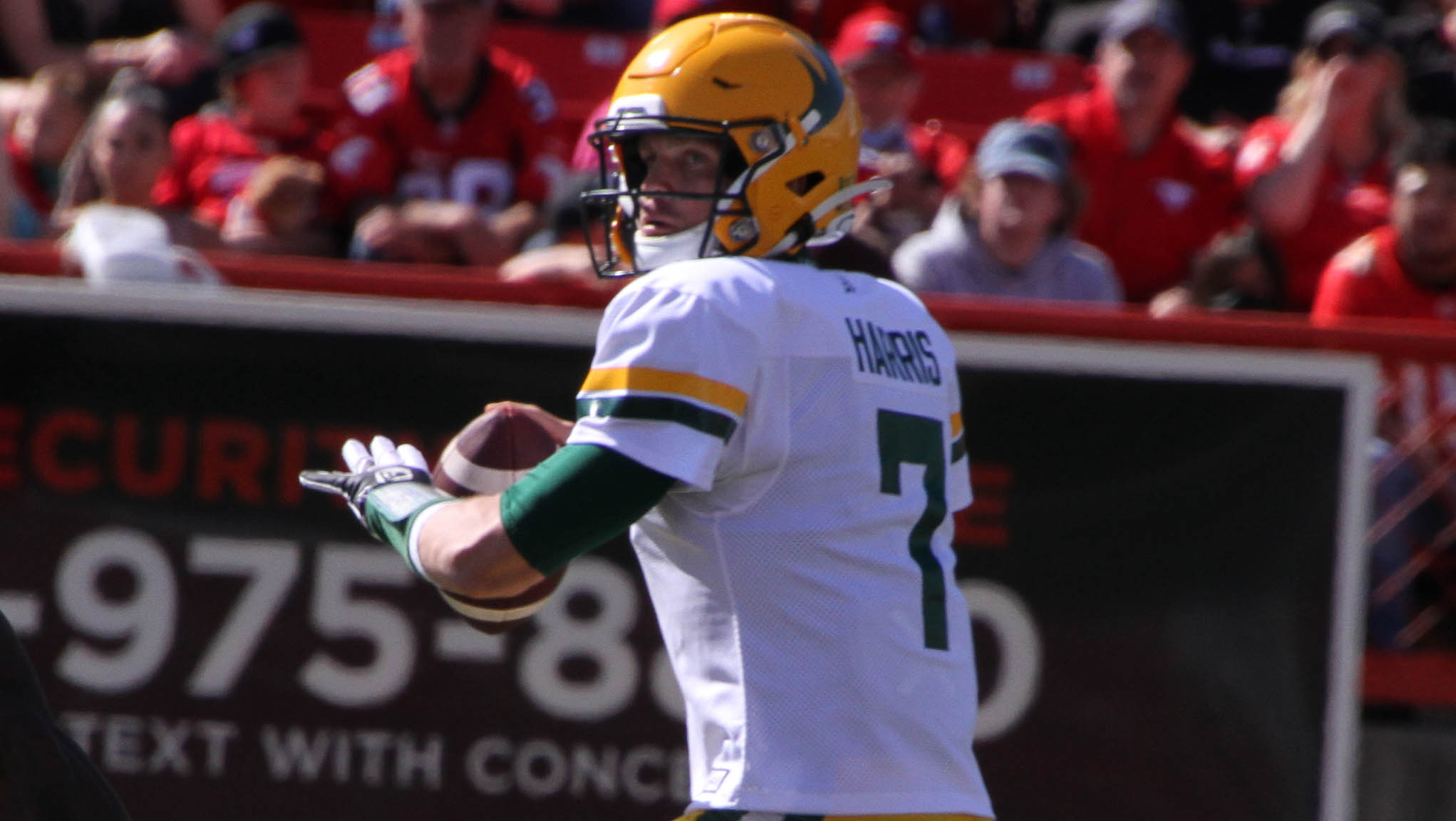 Harris threw for 5,595 yards through a season-and-a-half in Edmonton, taking them to the Eastern Final as a crossover team in 2019 (Photo: Edmonton Elks)

With quarterback Vernon Adams Jr. expected to miss the rest of the season with a shoulder injury, Matthew Shiltz will start in Montreal game Friday against Toronto.

Harris said he’ll play what ever role is required of him in Montreal.

“My contract says I play for the Montreal Alouettes and that’s what I’m going to do,” he said. “Whatever role I’m put in they’ll get 100 per cent from me.

“If that’s playing, then you’re going to get the best of that. If it’s being a backup and helping out, I’ll be here doing the best I can and using the experience that I’ve gained through the years.”

The 35-year-old believes he has “five good years of my prime left.”

“I do feel like I’ve got my best football ahead of me,” Harris said. “It’s exciting to be able to be here. If that’s to contribute on the field, then great. If it’s to contribute in terms of the meeting room and being able to help out in small ways in that regard, that’s what I will do as well.”

Harris is excited to work with an offence that features receivers like Jake Wieneke, B.J. Cunningham and Eugene Lewis plus running back William Stanback.

“They’ve done a good job of assembling the right talent in the right spots here,” he said. “They have such a dynamic core. It will be really exciting to work with these guys and hopefully we are all getting to play in Hamilton on Dec. 12.”

Harris doesn’t expect any difficulties learning a new offence midway through the season.

“Everybody has similar concepts,” he said. “It’s just about taking those concepts and seeing how the coach sees them here.

“I’m hoping in a few days I’ll be able to get up to speed.  From what I’ve seen from the playbook so far I’m really excited about being able to digest a good portion of it.”

In return for Harris, the nine-year CFL veteran that Edmonton signed as a free agent in 2019 after losing Michael Reilly to BC, the Elks received defensive end Antonio Simmons. It seems small payment for a former East Division All-Star that has played on two Grey Cup champions and guided the Ottawa REDBLACKS to the 2018 final.

If Harris felt any bitterness toward Edmonton general manager Brock Sunderland, he hid it well. Asked what went wrong in Edmonton, he simply shrugged.

“That would probably be a better question for them,” he said. “I have so much love for the guys in the locker room there and the honesty with which Brock Sunderland dealt with me. Although we disagree on certain things of the decision that were made, that’s neither here nor there. You’re always going to disagree.

“I know who I am and what I have to offer. No matter what the situation is, I’m always going to be a pro. I’m going to show up and give everything my best.”

In six games with Edmonton this season Harris completed 135 of 192 passes for 1,568 yards, six touchdowns and five interceptions. He missed two games because of a neck injury.

In his final game as an Elk, Harris completed nine of 22 passes for just 87 yards in a 30-3 loss to Winnipeg. Head coach Jaime Elizondo benched Harris for last week’s rematch with the Bombers in favour of backup Taylor Cornelius. Edmonton lost 26-16.

The Elks have lost five straight games and sit last in the West Division with a 2-7 record.

“Brock has always been great to me,’ he said. “Not always the most pleasant conversations but as a man you can respect anybody that’s honest with you. For that reason, you’ll always have a friendship for him and I’m thankful for (him) giving me the opportunity to play there.”

Harris also laughed off comments made earlier this year by Montreal defensive tackle Almondo Sewell. Prior to the Montreal playing Edmonton, Sewell was asked about his former Edmonton teammate.

“I know Trevor, you know? You hit him one time, he starts folding,” Sewell told reporters.

“If that’s the toughest thing I have to hear in my career…you’ve got to have thicker skin,” he said. “If he really does think that then I will show him through the rest of this year.”

Harris also wanted to clear up rumours about him not being vaccinated against COVID-19.

“During the bye week I went down to the States to do as needed to be done for me to be available for my teammates and coaches and the organization that I’m with,” he said. “I will be able to play in any game where it’s at.”