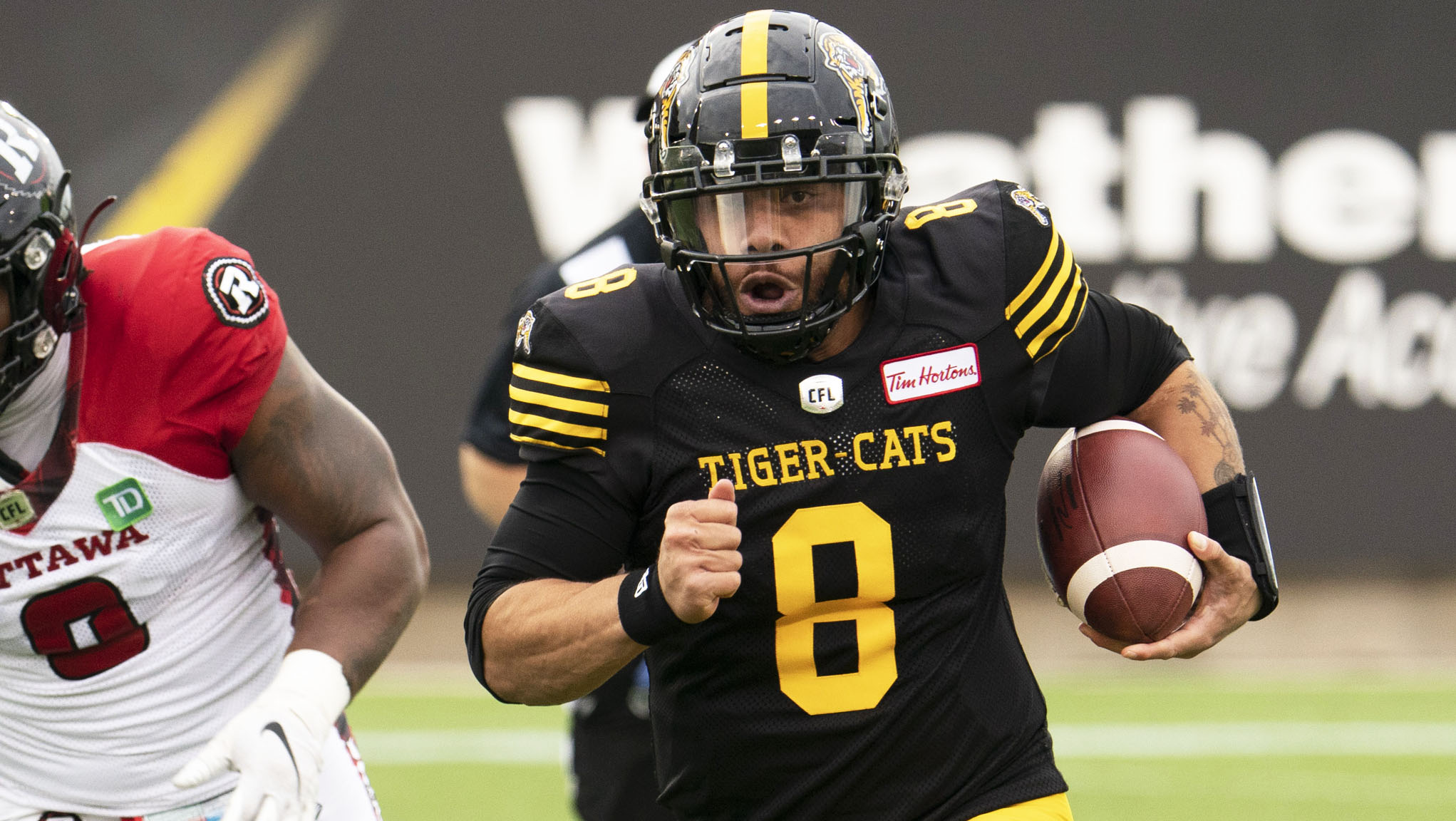 Hello, Stefan Charles. Kudos to you for your emergency fill-in work along the Ottawa offensive line on Saturday. In taking on the likes of Ted Laurent and Dylan Wynn, you finally got the chance to understand what others have felt like in trying to block you. That’s gotta be weird.

Hamilton quarterback Jeremiah Masoli might not be all the way back yet, but he’s close.

More and more, the 33-year-old pivot is looking like his old self. The self that was putting on a show in 2019, on his way to possibly being named the league’s Most Outstanding Player before having his season ended by a devastating knee injury.

Saturday’s effort was a strong one for Masoli and in case you’re thinking, “yeah, but it was against Ottawa,” don’t forget that the REDBLACKS have sported a pretty good defence most of the year.

Masoli’s passing game was impressive – he wound up 25 for 28, for 320 yards and two touchdowns – but it was his late-game scamper that really rang the bells.

In a game that was already put away, Masoli raced for 26 yards and took on contact at the end of the play, rather than sneaking out the side door along the sideline. And that came a short time after he had to be taken out of the game with a bloody nose, only to return with a goodly amount of gauze packed into one of his nostrils.

Message received: Number 8 is back, baby.

Out of the wreckage of Week 12 comes the firing of Ottawa general manager Marcel Desjardins, a Grey Cup winner in 2016, but also the architect of a team that’s gone 5 and 24 over the last two seasons.

And judging by the tone of his radio interview soon after he was informed of the organization’s decision, he’s fine with moving on.

“I said ‘I think you guys are making a mistake,’ and packed my bag and came back home,” Desjardins told Ottawa’s TSN 1200 radio.

Saying that he was looking forward to spending more time with his wife, Desjardins sounded like a guy who might well have had it with the world of pro football.

“I don’t know what I’m gonna do but I’m not eagerly looking to jump into the next role anytime soon, if at all,” he said.

It seemed there was a lot more he wouldn’t mind saying, but decided not to, at least not now.

“I don’t wanna get into what I really think and what’s goin’ on ‘cause that’s not for me to share anymore,” Desjardins said.

“At the end of the day, if there’s anything to be learned from this is (that) when decisions have to be made, make sure you control your own destiny and maybe I wasn’t in the right mode where that’s concerned and I’ll leave it at that.”

That is a tantalizing little nugget to toss out there as it sounds like Desjardins feels he was pressed by someone into making a personnel move or two not of his liking. Unless he provides details at a later date, we’ll all have to be content with being left to wonder.

One thing that is crystal clear: If it was not completely apparent, on Saturday, that 2022 had already come for the Ottawa REDBLACKS, it became so on Monday morning.

THAT WAS GREAT, BUT…

If the Saskatchewan Roughriders’ win over the Calgary Stampeders does nothing more than ensure head coach Craig Dickenson gets a better seating assignment at the family Christmas dinner, well that’s sure something. (Though I have to say that, personally, some of my very best Christmas dinner performances, as an adult, have come with me being seated at the kiddie table. All the six and seven year olds thought I was brilliantly intelligent and captivatingly charming, if I remember correctly.)

Removing the Stampeders block, finally, might be a very good thing for the confidence of the Dickenson-led ‘Riders but the coach is staying cautiously optimistic rather than fully assured.

“Well, we did not play a perfect game by any means,’ said Dickenson afterward. “We made a lot of mistakes. And I think we left plays out there, I really do.”

Steps forward – crucial for the Roughriders to take in this game in the battle for second in the West – were taken. But what Dickenson knows is that his team needs build on that, and build on it quickly, in order for them to continue growth towards the playoffs.

Luckily for him, he has a little something he can rely on in order to maintain his players’ attention for the upcoming practice week; watching their upcoming opponent in action.

“I think the film from Montreal beatin’ Toronto is gonna do enough to motivate them,” he said.

Just a couple weeks ago, or so, Saskatchewan defensive backs Jeremy Clark, Damon Webb and Jacob Dearborn were all toiling away in anonymity on the Roughriders’ practice roster.

Saturday night, they were keys to the team’s win over the Stampeders, and a firmer grasp of second in the division. Between them, they amassed 13 tackles, two more on special teams. Most notably, they each had an interception to give the ‘Riders some important sudden changes in a close, close game.

“Hats off to them for puttin’ in the work to make sure they were ready to play when they got the opportunity,” said Coach Dickenson.

Just a reminder that good teams need all sorts of depth in order to succeed, as a season progresses. And that practice roster guys are more than just relief for vets in prep sessions.

KNOW WHAT? THAT GUY WAS RIGHT

After a Week 8 loss to the Toronto Argonauts, plunging the Alouettes to a record of 2 and 4 and in danger of losing touch with the race in the East, Montreal’s Patrick Levels was indignant.

He was frustrated, but he was also very sure of himself.

“I promise y’all gonna be talkin’ to me totally different come a couple weeks from now,” Levels said at the time. “I promise you. Everybody’s this freakin’ close to us whoopin’ their ass.”

The Argos got their hides tanned by the Als to open Week 12 (proving that just because it’s Friday night and you’re in Montreal, doesn’t mean you’re gonna have a good time) and it appears that Levels was correct about his team finding the range, even if he may not necessarily have imagined them doing it with their back-up quarterback at the controls.

The Alouettes seem to have come up with the right combination on offence with Matthew Shiltz at quarterback (that combination, by the way, is 31 right, 31 left, 31 right) and they appear to have a defence that is rising fast, something which the Argos could confirm after Friday night’s show.

Interesting developments in Montreal. It will be fascinating to see how the next three weeks play out for them, first taking on Saskatchewan and then going up against Winnipeg in back-to-backers.

Hamilton coach Orlondo Steinauer’s team was up, comfortably, against the Ottawa REDBLACKS on Saturday, when his team faced a third and two at the Ottawa 15 yard line, and less than four minutes to go.

The score was 18-3 and the math there says to kick a field goal and go up by three scores, but Steinauer had his team go for it. The Ticats converted and then scored a touchdown, instead, scoring another one for good measure, with a minute and a half to go.

Some might think that’s overdoing it a bit, but you might want to consider two things before accusing the Ticats of running up the score for no good reason.

One, Steinauer is not known for anything other than being a decent guy in this regard. He’s not out to embarrass anyone, it’s fair to say.

So, two, he must’ve had a good reason, right? And I think he did.

If Hamilton’s defence has been largely tip-top this season, the team’s offence has not. With a blend of injuries and underperformance, 2021 has seen the Ticats swimming against the tide when trying to build offensive consistency.

And so, with a victory well in hand against Ottawa, Steinauer must’ve been eager to continue the strides the Ticats had made in this game. Eager to keep and, in fact, bolster the ball-moving momentum that was being shown.

A field goal would’ve sufficed, if you lean on math and math only. But the Ticats were in need of more than that and they ended up getting it.