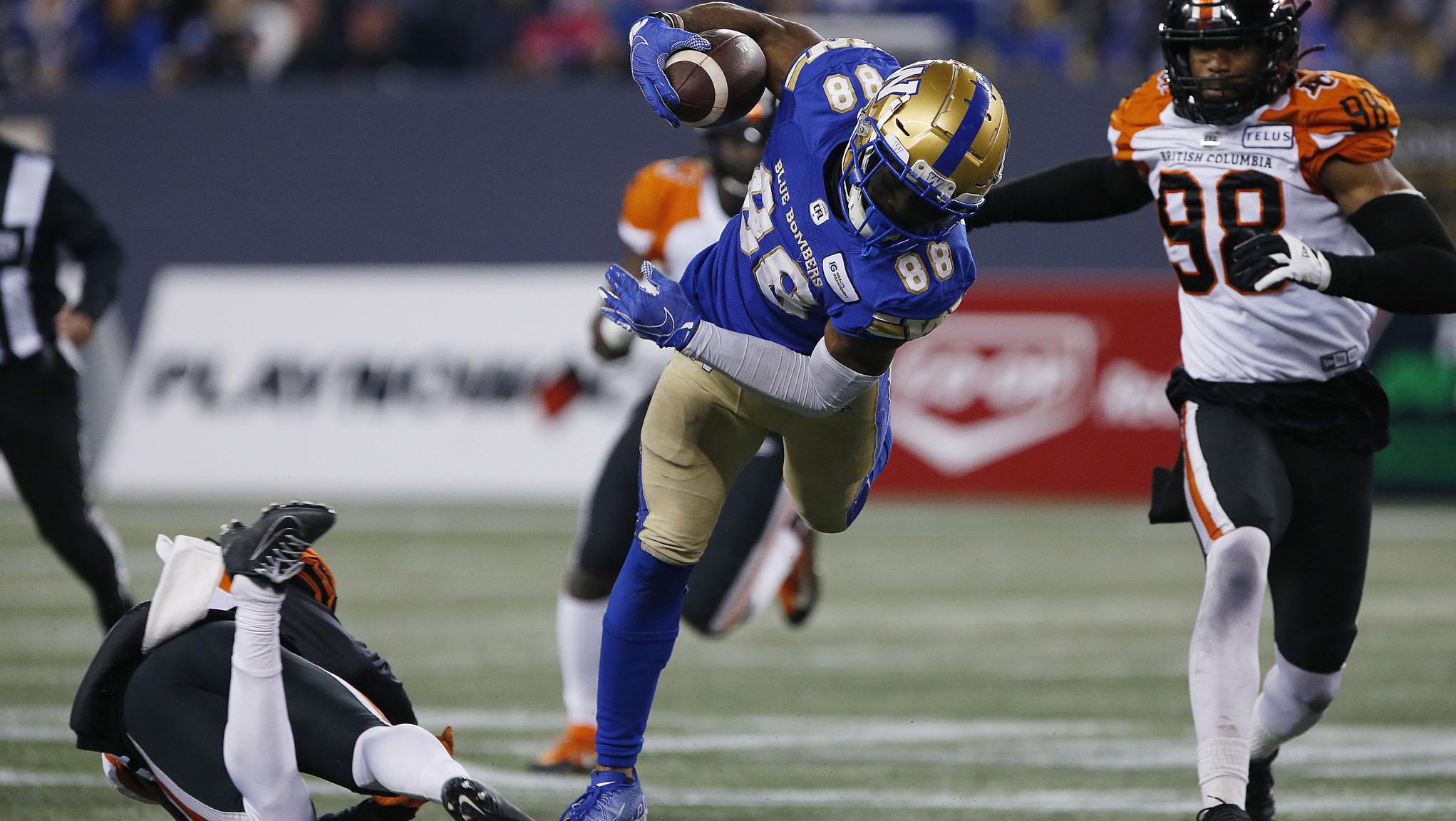 TORONTO — With another week comes another win for the now 10-1 Winnipeg Blue Bombers. They’ve not only punched their ticket to the post-season, but have now guaranteed that the road to the 108th Grey Cup in Hamilton — the Western leg of the journey, at least — will have to go through through IG Field.

The Bombers took their dominance to a new level this past week, handing the BC Lions a 45-0 loss and looking every bit the defending Grey Cup champion that they are. Our MMQB goes into great detail on the Bombers’ dominance, crunching the numbers and looking at how this team’s pass defence would look in a regular 18-game schedule. The result? At their current pace in a full season, they’d be twice as stingy as the 2018 Calgary Stampeders’ pass defence, which was the best we’ve since 2004.

Week by week, we’re watching an all-time great team go to work. It’s a treat, even if the outcomes are getting predictable and we should appreciate it.

We wonder, now that the Bombers have the Western Final locked in and have no doubt met their major regular-season objectives, what the game plan will look like from head coach Mike O’Shea. Will we see some load management in the team’s final three regular-season games? Will Sean McGuire get some passes and rushes to balance out the seven rushing touchdowns he’s scored this season? Or will it be business as usual for the visiting Montreal Alouettes, who were fiery opponents for the Bombers in 2019?

An underlying story for this Riders team has been slaying some of the dragons that have hovered around them this year. In taking down the Stampeders this past week the Riders got to do just that, at McMahon Stadium, no less. A win over Dave Dickenson is big for brother Craig in Saskatchewan and just as big for QB Cody Fajardo. That other dragon — the Winnipeg Blue Bombers — still lingers, with a playoff matchup serving as the only possible way for that score to be settled this season.

The Stamps had their three-game win streak snapped and remain in that jumble of six teams that are at or around the .500 mark. Owners of the season series with the Stamps — and the Lions for that matter — they’ll need to gain some ground on the Riders if they want to host the West Semi-Final. While each team has won on the road in that Calgary-Sask. pairing this season, traveling into Mosaic in late November would be a difficult task for any team.

The Als are fighting through adversity to continue stacking wins. Their dismantlement of the Argos was very impressive, from forcing McLeod Bethel-Thompson into four picks to Matthew Shiltz picking up his second win as a starter, with the freshly-acquired Trevor Harris moving out of the shadows and onto the sideline this week. Also deserving of some credit for coming through the fire to thrive: Montreal’s beaten up offensive line, which hole-punched a 203-yard night for William Stanback.

This week is a reminder that football is a what-have-you-done-for-me-lately business, no matter how good things were looking in weeks past. What we saw last week in Montreal wasn’t good. Bethel-Thompson’s four-pick night may well open up the starting QB conversation again, while that defence that looked like a suffocation threat over the last few games was humbled by Stanback and the Als. The Argos’ misstep leads to a suddenly wide-open East Division once again.

With a pair of impressive games under his belt, Jeremiah Masoli and the Ticats can dig in for a big push in their final four games. We might point to the opponent this past week, given the direction that Ottawa’s season has gone, but Masoli did his part with a very sharp 25-28 passing for 320 yards with a pair of touchdowns and zero interceptions. With Bralon Addison coming into form alongside Masoli, the Ticats should be increasingly confident about how the next month will look for them.

While the Ticats are priming up for their final four games, the Lions are taking stock of how they can get their once-promising season back on track. Lucky Whitehead is a big part of the list of things that are missing, but the Bombers exploited the Lions in all three phases of the game. The good news for the Lions is that they’re not that far back from the pack, but they obviously need to start finding ways to compete in and win games. They get a shot at redemption this week against the Argos.

The Elks tinkered with their roster through their bye week and will need to be sharp this week against the visiting Ticats. We’ve written much about Taylor Cornelius having the unfortunate pleasure of going up against the Bombers so many times in the last few weeks. The opponent is different this week, but that Ticats’ defence is one that will be looking to capitalize on the mistakes an inexperienced pro QB will make.

The departure of GM Marcel Desjardins will loom over the REDBLACKS this week but head coach Paul LaPolice, his staff and the players know that the show must go on. Hosting a resurgent Stampeders team will be no easy feat for a team that officially had its playoff hopes dashed in its loss to Hamilton on Saturday. Sending young, inexperienced quarterbacks out against Calgary’s defence will also be a difficult task but with their eyes to the future, the REDBLACKS will try to gauge what they’ve got and how these players can fit into the picture next season.