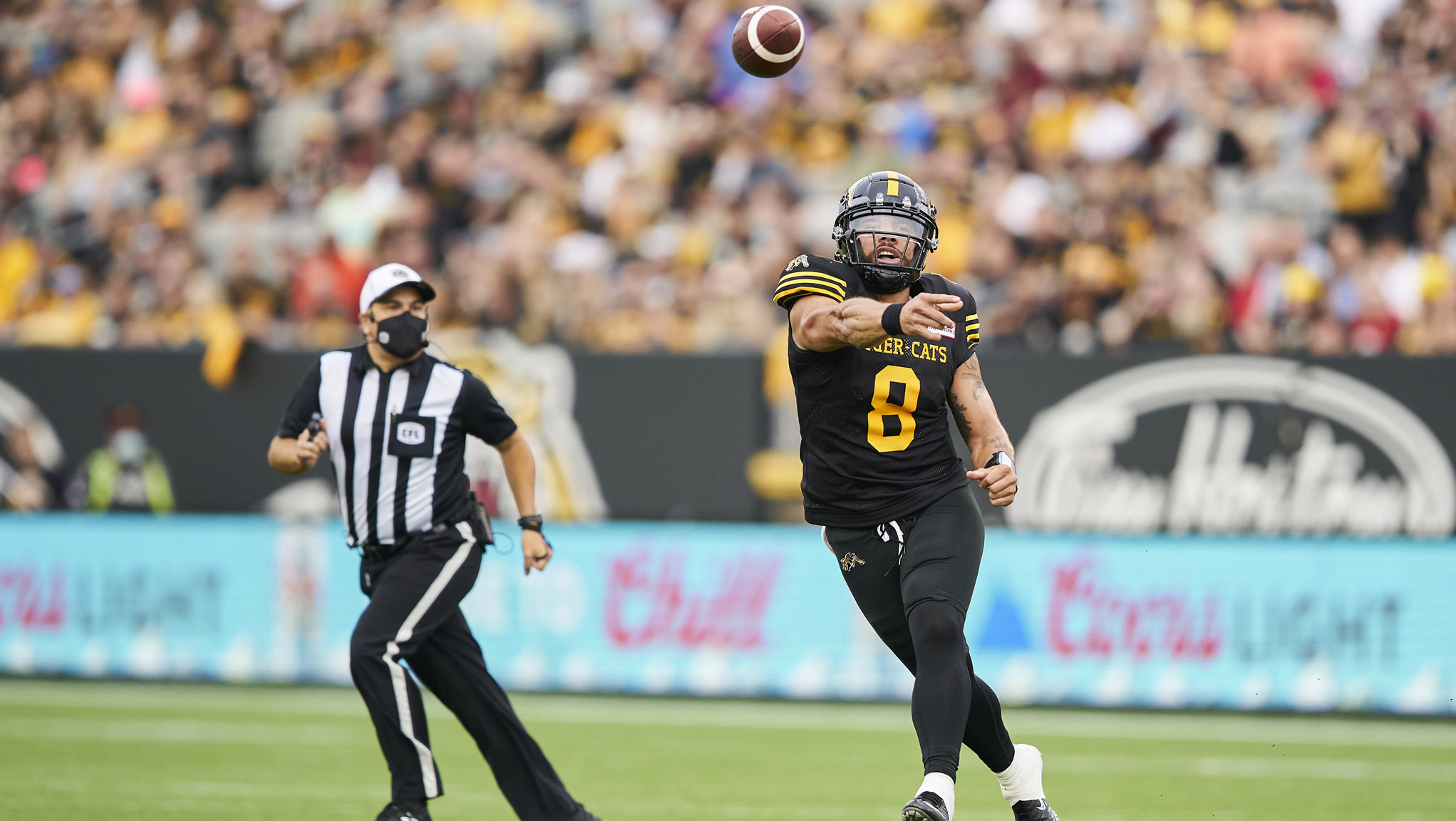 TORONTO — As the Alouettes, Ticats, Bombers and Stampeders knocked off their opponents one-by-one last week, a group of pick-makers scattered across the country were glued to what was happening in front of them.

As has been well documented in this space, the 2021 CFL season hasn’t been kind to those tasked with making picks. In recent weeks that’s been changing, as individual records are creeping up to and over the .500 mark on the season.

Last week, though, was special. Two of our writers — Pat Steinberg and Jamie Nye — have raced past that break-even mark. Steinberg went 3-1, lifting him to 26-20 on the season, but Week 12 belonged to Nye, who claimed a clean sweep, going a perfect 4-0 to improve to 25-21.

As he noted in his Weekly Predictor column, there were no social media fireworks of this achievement, no handshakes, virtual or in this increasingly-safe-to-do-so real world we live in. So we’ll let this space be the place where he gets his due. It’s been a tough season, one that has taught us that with parity (Winnipeg obviously excluded) comes unpredictability and uncertainty. With all of that in mind, a 4-0 week deserves a celebratory moment. We can’t recreate the lavish camera work or high-end graphics of the trophy presentation at the end of a Mario Kart grand prix, but we hope that’s how you’ve felt this week or at least reading this now, Jamie Nye. You’ve earned it.

We’ll add the same disclaimer here that Nye added to his column this week. If he, or any of the other five pick-makers go 0-4 this week, forget what was written here and where you can find us on Twitter. 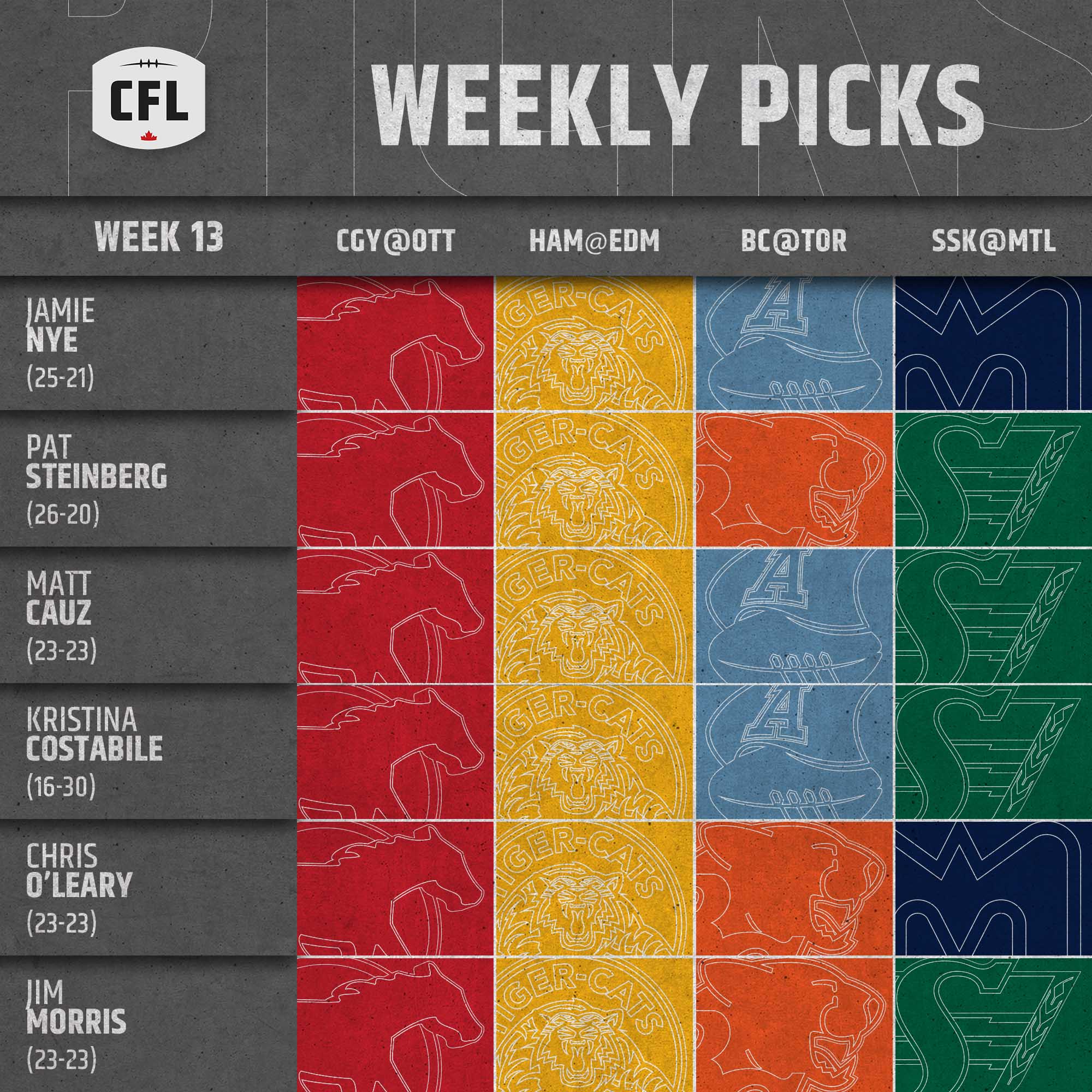 The REDBLACKS come into Week 13 having relieved GM Marcel Desjardins of his duties, with the team banged up and sitting on a league-worst 2-9 record. A front office move doesn’t always resonate through the roster or trickle into the day-to-day workings of a club, but it may for the REDBLACKS, who let their Day 1 hire go this week. On the field, head coach Paul LaPolice’s roster is far from what he likely envisioned it would be before the season started. With rookie quarterbacks and injuries hitting some key players (DeVonte Dedmon, Tim Flanders, Antoine Pruneau are all currently DNPs on the team’s injury report), each remaining week could feel like an uphill battle for Ottawa. The Stamps arrive for Friday’s game in the thick of the playoff hunt, with everything to play for.

There’s a similar feel to this game as the one in Ottawa this week. The Elks are still technically in the playoff picture, but are sitting on a pair of wins and have been part of two big QB trades in the last couple of weeks, shipping Trevor Harris to Montreal and acquiring Nick Arbuckle from Toronto on Monday. Hamilton comes in at .500 with some offensive momentum (finally), looking to turn it up in its final four games. We think they will, which would make the race in the East that much more interesting.

The Argos put their spotless record at BMO Field on the line against a Lions team that left Winnipeg with their tails between their legs after losing 45-0 to Winnipeg. The Argos may be feeling some of that too, coming off of a disappointing loss last week in Montreal that saw McLeod Bethel-Thompson throw four interceptions, easily his worst game of the season. This is an interesting match-up, with the Lions needing a win to stay in that record jumble with the Riders and Stamps, while the Argos are chasing first in the East. The hungrier team will take this one, but we can’t agree on which team that is.

We wrap up Week 13 with what might be the most interesting pairing on the schedule. The Als have won four straight, despite losing Vernon Adams Jr. to injury and having their o-line hit hard by injuries along the way. Trevor Harris is in the wings, but Matthew Shiltz has done more than enough to keep this team going. The Riders got a big win last week in Calgary, injecting some life into a season that had hit a Stamps-infused snag the last few weeks. Watching William Stanback plunge into the heart of the Riders’ defence should be a treat, the perfect kind of game for a cool night — it may dip below zero by kickoff — on the prairies.