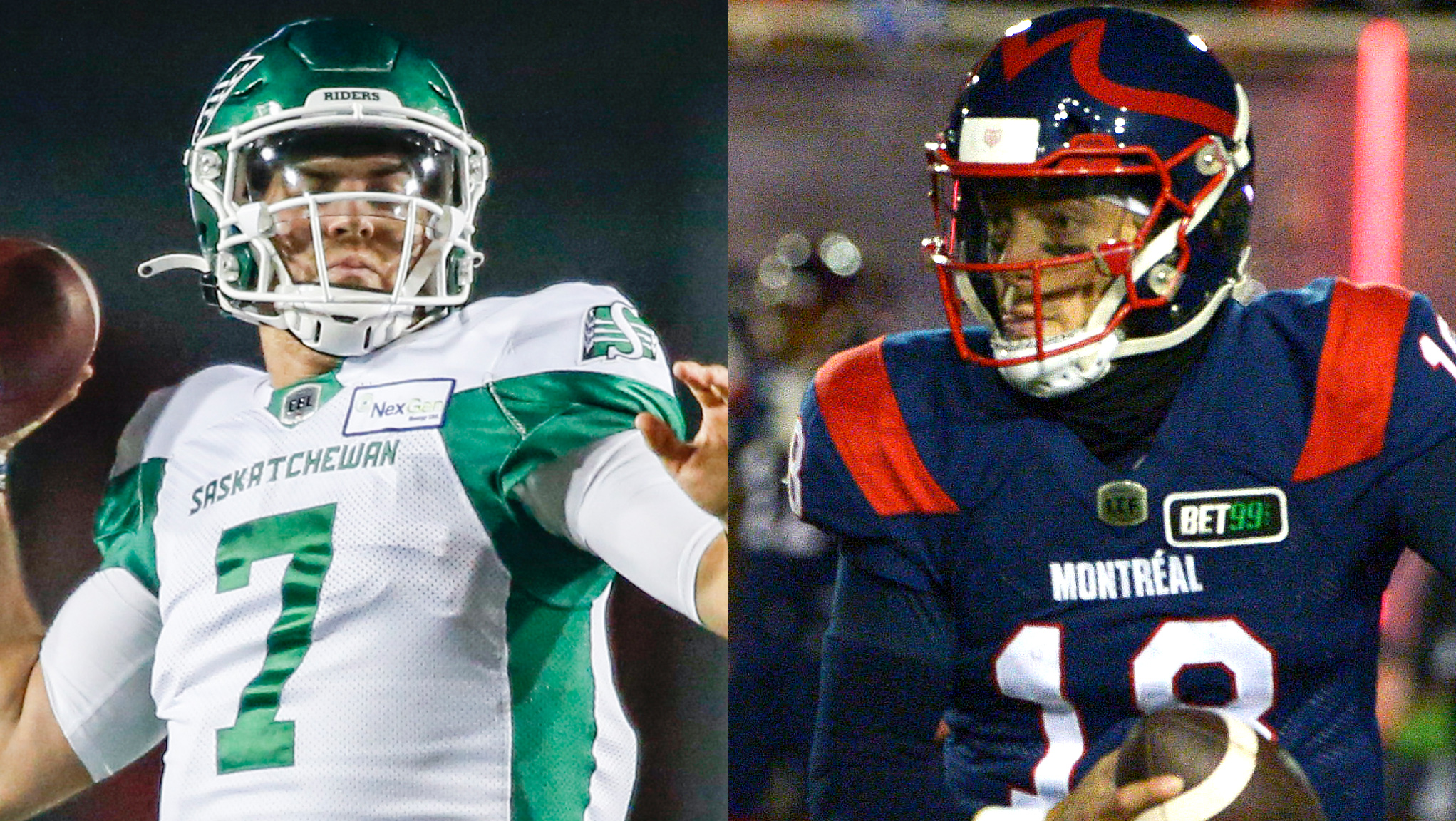 MONTREAL — Queue up some Semisonic because it’s closing time in Week 13. The Saskatchewan Roughriders will close out the week by crossing into the East to take on the Montreal Alouettes at Percival Molson Stadium.

The Alouettes have been one of the hottest teams in the East as of late, having won the last four straight games, the longest active winning streak in a single season by the Als since 2016.

With a win over the Riders on Saturday, the Als have a chance to clinch a berth in the playoffs and all the pieces seem to be falling into place for Montreal as they gear up for the post-season.

The Als took hold of the top spot in the East with a commanding 37-16 win over the Toronto Argonauts in Week 12. Montreal backup quarterback, Matthew Shiltz played admirably filling in for an injured Vernon Adams Jr.

Shiltz totalled the second fewest passing attempts among all starting quarterbacks in Week 12, putting the ball in the air just 18 times. Despite his limited pitch count, Shiltz completed 12 of his passing attempts for 212 yards.

The fourth-year pivot topped off his impressive night by throwing a 33-yard touchdown pass and a 58 yarder, both of which were hauled in by Montreal’s Eugene Lewis.

Shiltz has been playing well over the course of his first two career starts, having completed 33 of his 52 passing attempts and throwing for 493 yards and three touchdowns.

Beyond the numbers and the on-field performance, what’s been most impressive is that Shiltz was able to step under centre on short notice and deliver two crucial wins to help propel the Als into first place in the East.

Though he did get some help against Toronto in the form of running back William Stanback. In their win over the Boatmen, Stanback was assigned to handle most of the workload and became the focal point of the Montreal offence. He reached a career high in carries, toting the rock 24 times, while also adding 203 rush yards and a touchdown.

Stanback now leads all CFL backs in yards with 880 and averages an impressive 6.6 yards per carry. The third-year Alouette has also recorded five games this season where he has rushed for 100 yards or more, the most of any back across the league.

It should come as no surprise that Montreal will look to make Stanback the primary offensive option on Saturday. Especially when taking into consideration that Saskatchewan has allowed the most rushing touchdowns league wide.

Despite the almost impossible task of stopping the Montreal ground game, the Riders may possess the right combination of front seven pressure and back-end speed necessary to secure a win.

Pressure and forced turnovers will be the key to success for the Riders. Headlined by Jonathan Woodard and A.C. Leonard, the Riders have recorded an impressive 32 sacks and boast one of the best pass rushing units in the CFL.

The aggressive nature of the Green and White pass rush is the complimented by the incredible speed and awareness of defensive backs Nick Marshall and Ed Gainey, who lead the Riders in interceptions. As a team, Saskatchewan has collected a league leading 13 interceptions on the year.

The ability to put pressure on opposing quarterbacks and force them into throwing ill-advised passes has allowed the Roughriders defence to become one of the best in the league at forcing turnovers. Through the first 12 weeks of the regular season the Riders have been responsible for forcing 27 turnovers, the second most across the league.

However, Saskatchewan is not just simply taking the ball away, they have been extremely effective at capitalizing on their turnover opportunities. Having been able to accumulate 66 points this season following a takeaway and are one of just four teams to have more than 50 points from turnovers.

Saturday’s matchup will be a hard-nosed battle that seemingly embodies the old adage, “two yards and a cloud of dust,” as one of the league’s most prolific defences gets set to take on the league’s best ground game.

Kickoff is slated for 7:00 p.m. ET on Saturday night on TSN, RDS and ESPN+ or can be followed along on CFL.ca’s Game Tracker.