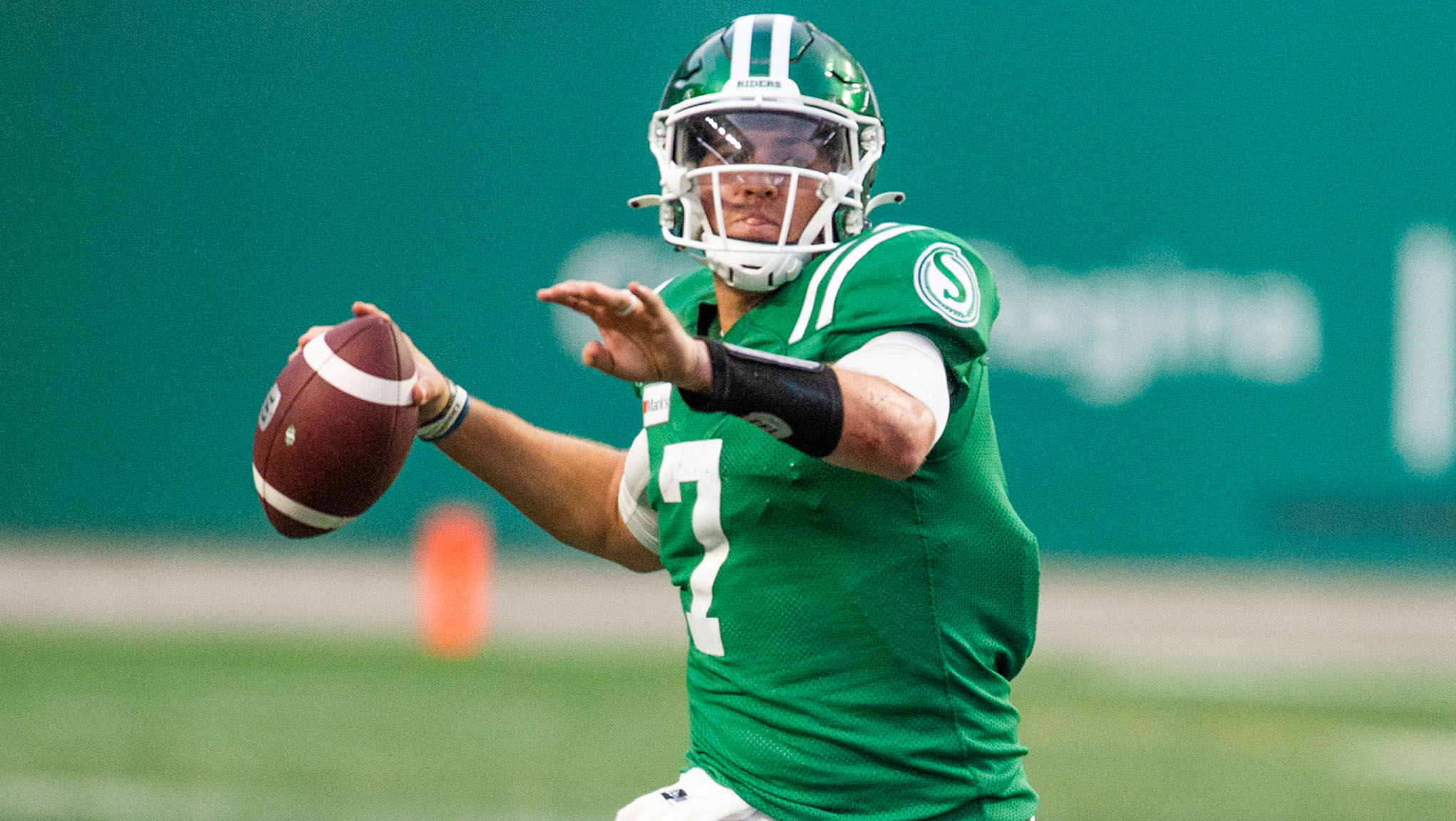 That’s what we’re seeing this week in our writers’ picks. With their collective records on the rise, there seems to be a little more willingness for them to stick their necks out, to get out on those limbs that in the sub-.500 days (a period we’ll refer to as the dark ages of the 2021 season) they may not have.

You could argue that there are four clear favourites in Week 14’s slate of games. However, we only have one unanimous selection of the four games and perhaps most surprisingly, we have two writers picking the Montreal Alouettes to end the Winnipeg Blue Bombers’ eight-game win streak and to hand them their first loss of the season at IG Field.

We’d also like to use this space to give a pair of our pick-makers — Matt Cauz and Kristina Costabile — a big shout out for going a perfect 4-0 in their selections in Week 13. There was no doubt a belated moment of thanksgiving from them as they watched the Argos hold off the BC Lions in overtime to get that crucial win (both for the Argos’ playoff fate and for the pick-makers’ records).

Are upset picks of BC, Ottawa and Montreal gutsy, sage moves from the writers, or a case of momentum-induced hubris? We’ll find out this weekend.

RELATED
» Weekly Predictor: Betting on the Alouettes
» CFL Pick ‘Em: Make your picks for Week 14!
» Start vs. Sit: Getting comfortable with Masoli 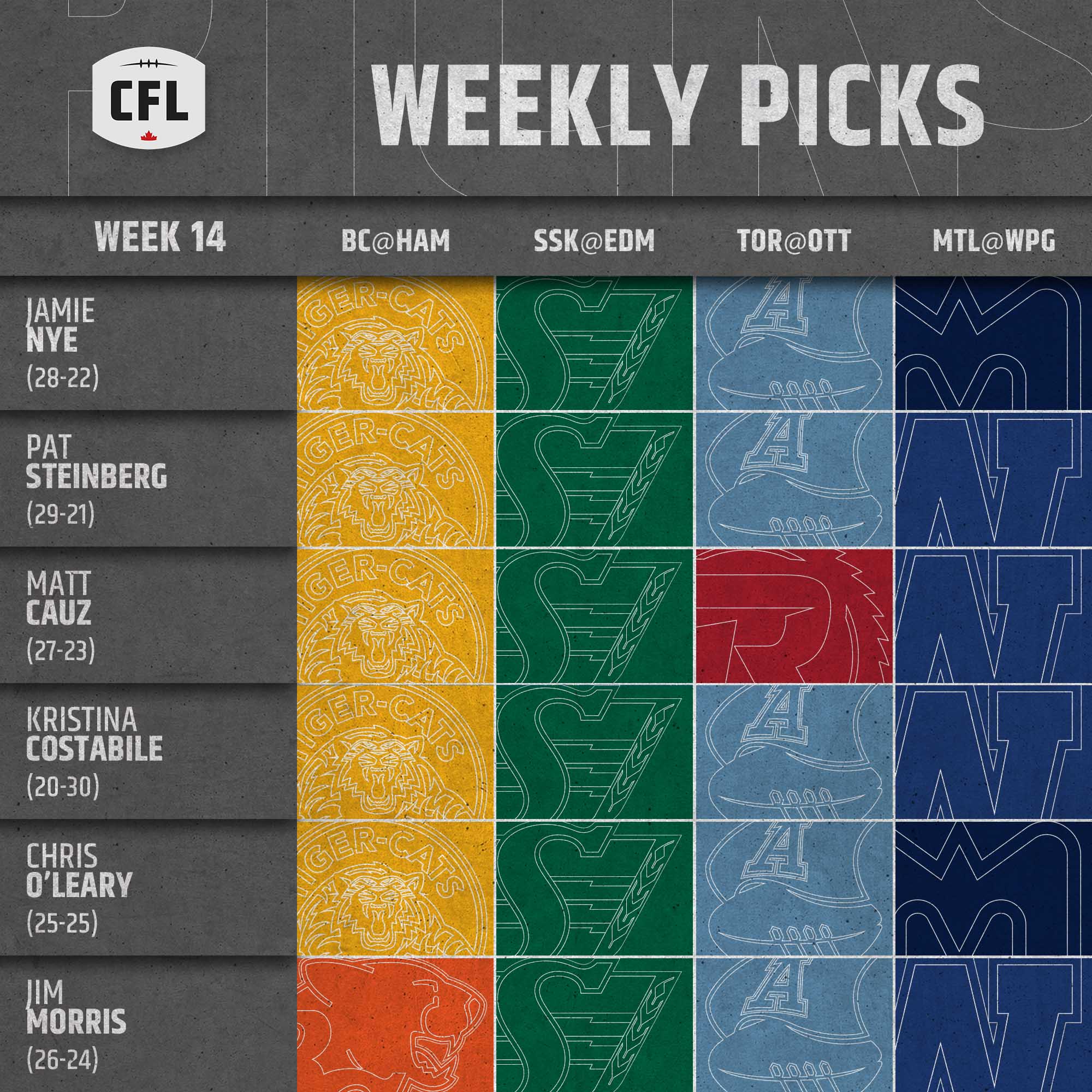 The Ticats have evened out their recent two-game slide with a pair of wins against Ottawa and Edmonton. Jeremiah Masoli and the Ticats’ offence seems to be getting into a groove. That’ll be put to the test against a Lions team that’s desperate for a win and no doubt felt like they should have come out of BMO Field last week with one. Michael Reilly shook off an early interception last week to throw three touchdowns. We think he’ll bring the same heat this week. The Lions’ defence will have to get back to its early-season play if they want to slow down Masoli. Jim Morris thinks they can do it.

The Riders head into a home-and-home series with the Elks and while they’ve clinched their playoff spot, there’s still plenty for them to play for. They want a home playoff date, knowing how impactful Mosaic Stadium can be. They also want to get their offence into the realm of production it’s capable of. Against an Elks team that’s on a six-game losing streak, the stats say they’ve found the right opponent at the right time. The Elks are looking for their first win at Commonwealth Stadium this season, while holding on to a sliver of post-season hope. We’ve found our sole unanimous pick this week.

They’re saying the right things in Ottawa, where the REDBLACKS are missing the playoffs for the second consecutive season, but wanting to give their fans something to cheer about in their home finale. Talking about finishing strong for the fans and leaving good film for an off-season of evaluation can sometimes create a looseness within a team that lets them put a bad season behind them and take the field with a sense of freedom. Is it enough to slow an Argos team that took it to them in Week 10? Matt Cauz thinks so.

It’s the tallest of tasks in the CFL this season. Only the Argos have been able to take a win away from the defending Grey Cup champion Winnipeg Blue Bombers. That happened on the road, back in Week 3, when the Argos shocked them at BMO Field to close out a home-and-home series. At IG Field, the Bombers are a perfect 6-0 and stand tall on their eight-game win streak. And they’re coming off of a bye week! Still, two of our pick makers see the opportunity for an upset. Trevor Harris gets another shot at Winnipeg’s defence, getting his first full game in with the Als and we do wonder what the Bombers may look like in the final weeks of the season, with the West secured and veterans perhaps in need of some rest ahead of the playoffs. Could this be the week the streaks end? Jamie Nye and Chris O’Leary say yes.