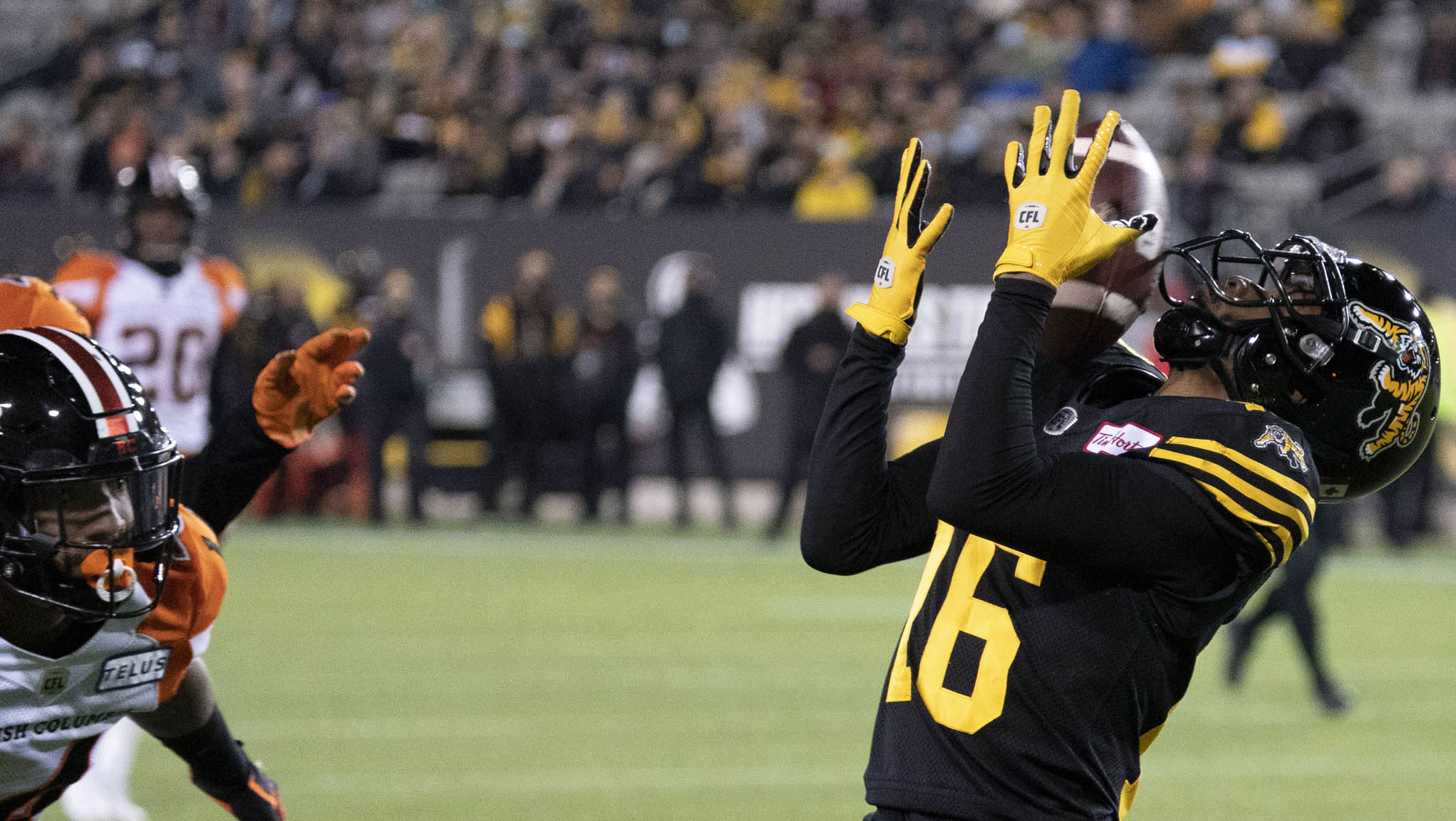 HAMILTON — The number, when Marshall Ferguson said it on TSN’s broadcast, was jaw dropping.

It had been 719 days since Brandon Banks‘ last trip to the end zone. To be fair to Banks, pretty much everything in life fell under the semi-permanent pause of the pandemic in 2020 and when you lose a season of play, that’s out of your hands, regardless of how sticky they are and how many binds they may have gotten you out of in the past.

“I mean how long was it, Eastern Final?” Banks asked. He was right. He had an incredible diving touchdown reception in the 2019 Eastern Final. He had a three-touchdown game two weeks earlier in the regular-season finale against Montreal, just a snippet of a 1,722-yard season that earned him the Most Outstanding Player award.

“To be honest, me personally, I don’t have nothing to prove individually. I don’t need individual stats, individual awards, none of that,” he continued.

“The only individual award I need right now is a Grey Cup. That’s all I’m focused on.”

Banks’ 75 receiving yards and the touchdown, along with 65 yards on returns were a key part in the Ticats’ 26-18 win over the BC Lions on Friday night. The win was the Ticats’ third in a row and got them into the playoffs.

Banks sounded every bit an eight-year vet as he explained his approach to what’s been a very challenging season for him.

“It’s the coaches and the guys that I have around me,” the 33-year-old said.

“I’m an older guy and obviously I can’t do the things I used to do earlier in the year. We have some great guys on the team. I love watching Tim White and Dunbar ball out. If they want to catch the ball 10 times a game and I have no targets, I’m perfectly fine with that.

“I’m OK. I’m all about winning right now. We did the first goal of getting to the playoffs and obviously, whatever it takes for us to win a Grey Cup.”

You often see it on the defensive side of the ball, where a player can be ice cold for weeks or months, until they finally pull in an interception or get a sack. Then all of a sudden they’ve got five in three weeks and they’re on a tear again. Banks can’t see the future, but he knows that through this recent win streak his body has started to feel better and better. You can see it as he’s handling returns, a responsibility picked up with Frankie Williams injured, that he’s moving better than he has all season.

That hot streak could be coming at the perfect time. 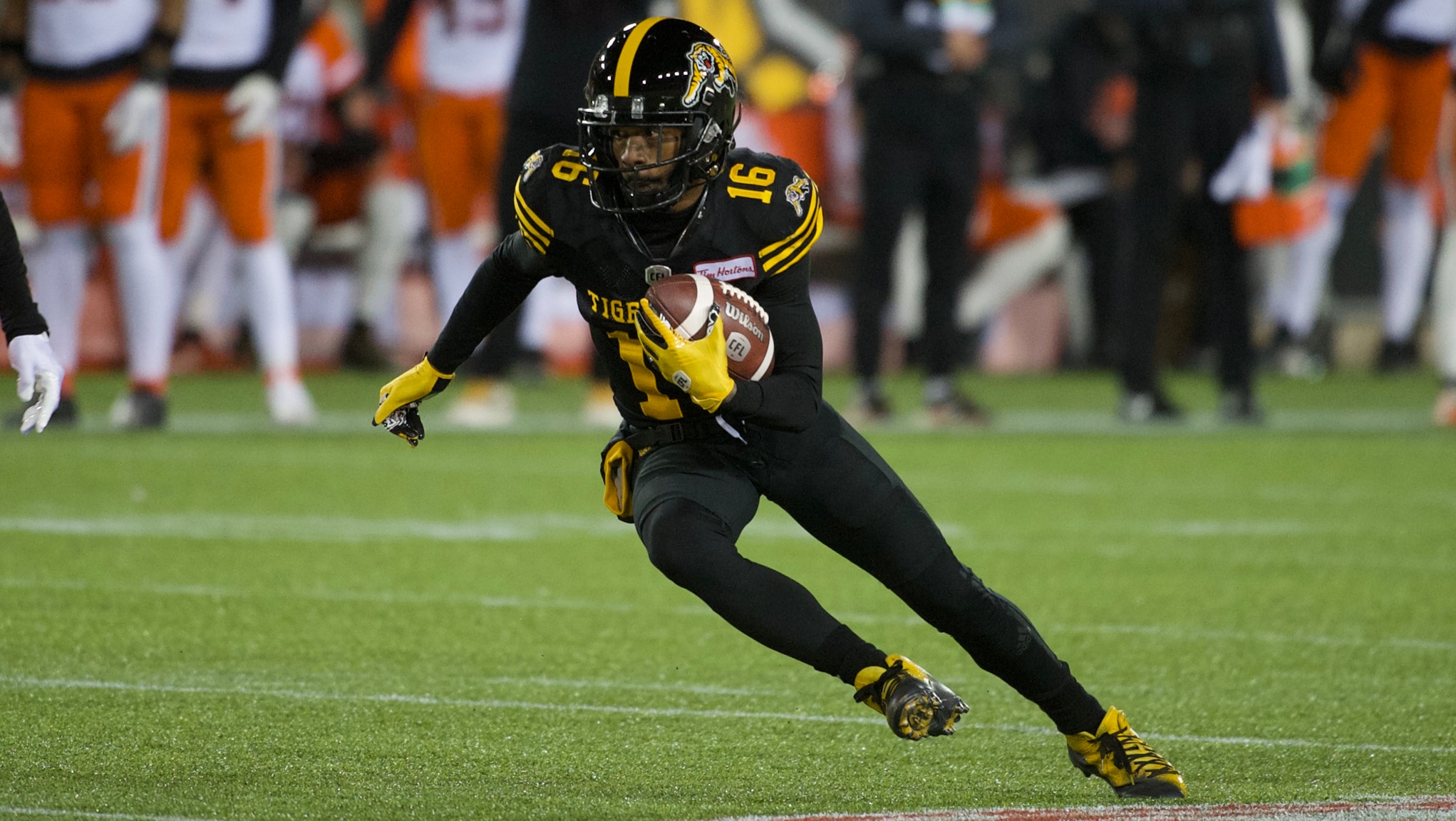 Brandon Banks pulled in his first touchdown of the season, but was happier that the Ticats clinched a playoff berth on Friday night (Photo: Hamilton Tiger-Cats)

“I’d be lying if I said that Speedy wasn’t overdue for a big play like that,” Ticats head coach Orlondo Steinauer said.

“Speedy is an ultimate ultimate competitor, but he also understands the ultimate goal. I think at this point in the season and in his career, he’s going to do whatever it takes.

“We’re going to have an opportunity down the stretch and I suspect that Speedy will play a big part in that.

“I think it’s been different. It’s definitely hasn’t been smooth sailing, mentally or physically for him. But he’s found a way to persevere through so I’m extremely proud of him.”

Ticats’ quarterback Jeremiah Masoli felt like Banks getting that touchdown could just be the start of something for a player that’s gotten very comfortable there through his career.

“Speedy’s been working his tail off and it’s good to see him cash that cheque, because he’s put in a lot of work. So definitely proud of him,” said Masoli, who made 19-26 passes for 258 yards and a touchdown.

“But he’s one of our most competitive guys on the team, so I know he’s not satisfied.”

The Ticats’ win also punched the Montreal Alouettes’ playoff ticket, while eliminating the possibility of a West Division team crossing over. That marks the first time since 2015 that a West team won’t travel East in pursuit of the Grey Cup.

The Ticats will head into a colossal game next week when they make the trip up the QEW to face the Toronto Argonauts, for what could be a battle for first place in the East Division.