From The Editor’s Desk: Get ready for Week 14

From The Editor’s Desk: Get ready for Week 14

It’s been well documented that picking the outcomes of games this year has not been easy.

The unpredictability of the CFL is what makes it so special; anyone can win on any day against any team. But as someone who is trying to predict the winner for a weekly CFL.ca column, that unpredictability has made things very difficult!

That being said, my record has been… less than stellar this year (and yes, I’ve heard you on Twitter with your chirps!). That’s why I’d like to celebrate my win from Week 13 before we move forward to Week 14. I, along with my colleague Matthew Cauz, went 4-0 last week in our picks. Woo hoo!

It felt nice to finish the week with a W – this must be how the Winnipeg Blue Bombers have felt all year.

I’m hoping this is the beginning of a late-season push. You know the one where a team goes on a hot streak in the final weeks of the season and then eventually ends up in the Grey Cup? Fingers crossed that’s me.

I also had my third-best CFL Fantasy outing of the season in Week 13 with 91 points. Jeremiah Masoli‘s big night against the Edmonton Elks (28.9 points) was my best fantasy play of the week, followed by Ka’Deem Carey’s 103-yard and a touchdown performance against the Ottawa REDBLACKS that was good for 21.6 points.

Here’s the rest of my roster from last week: 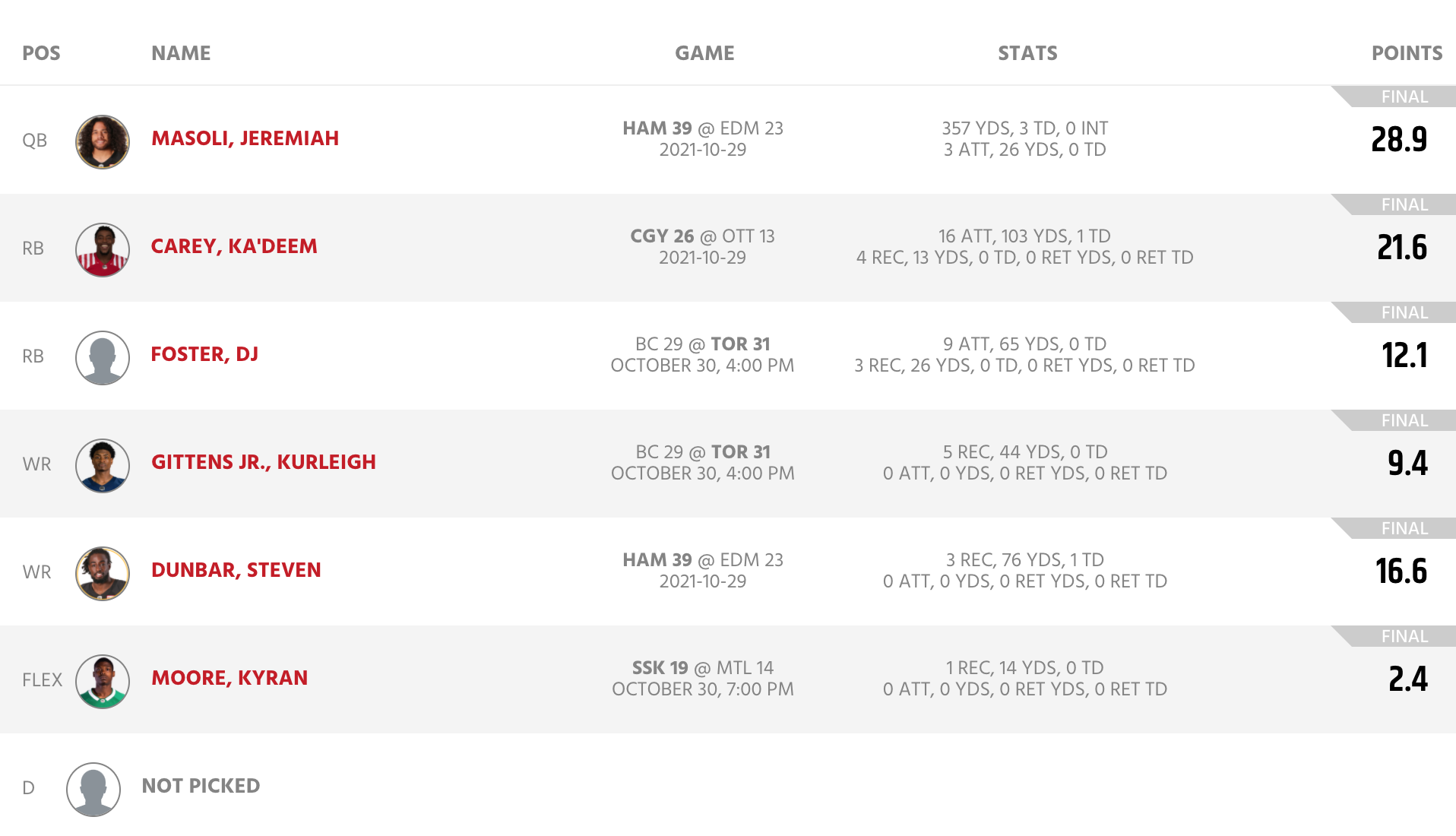 I’m going with the hot-hand of Masoli this week against the BC Lions. At running back, Don Jackson and Brady Oliveira take up my two spots. Jackson was extremely productive last week and I’m hoping the Ticats continue to focus on the run game to balance out Masoli’s pass attack. And any time Oliveira has been in the game to replace Andrew Harris, he’s been a force running the rock.

At receiver I’m going with Bombers receiver Nic Demski and Argonauts pass-catcher DaVaris Daniels and at flex I have Saskatchewan’s Brayden Lenius. And as always, I’m rolling with no defence. 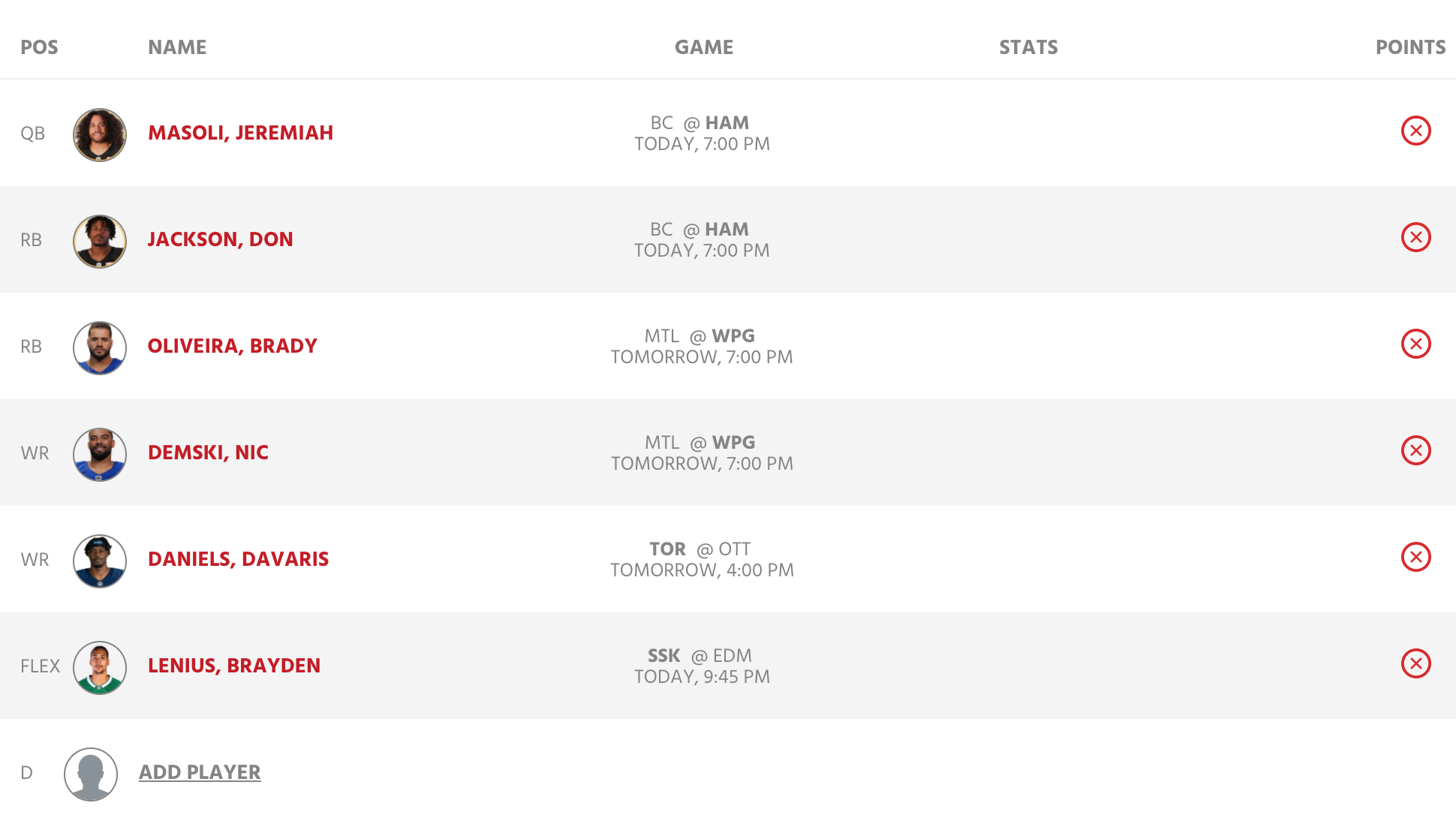 I think this game will be a close one after BC just barely lost to the Toronto Argonauts last weekend in overtime. It’s a must-win for the Lions to keep their playoff hopes alive and the Ticats will also be playing hard since a win locks up a playoff spot.

I don’t think Edmonton’s struggles will end this week, especially against a red-hot Roughriders defence.

Toronto has a lot to play for in this game as they look to keep the top spot in the East Division. While Ottawa has been eliminated from the playoffs, they’re still going to want to win this one in front of their home fans. I don’t expect this to be an easy win for the Argos.

I feel confident picking the Bombers this week but when you get too confident that’s when things go wrong, right?