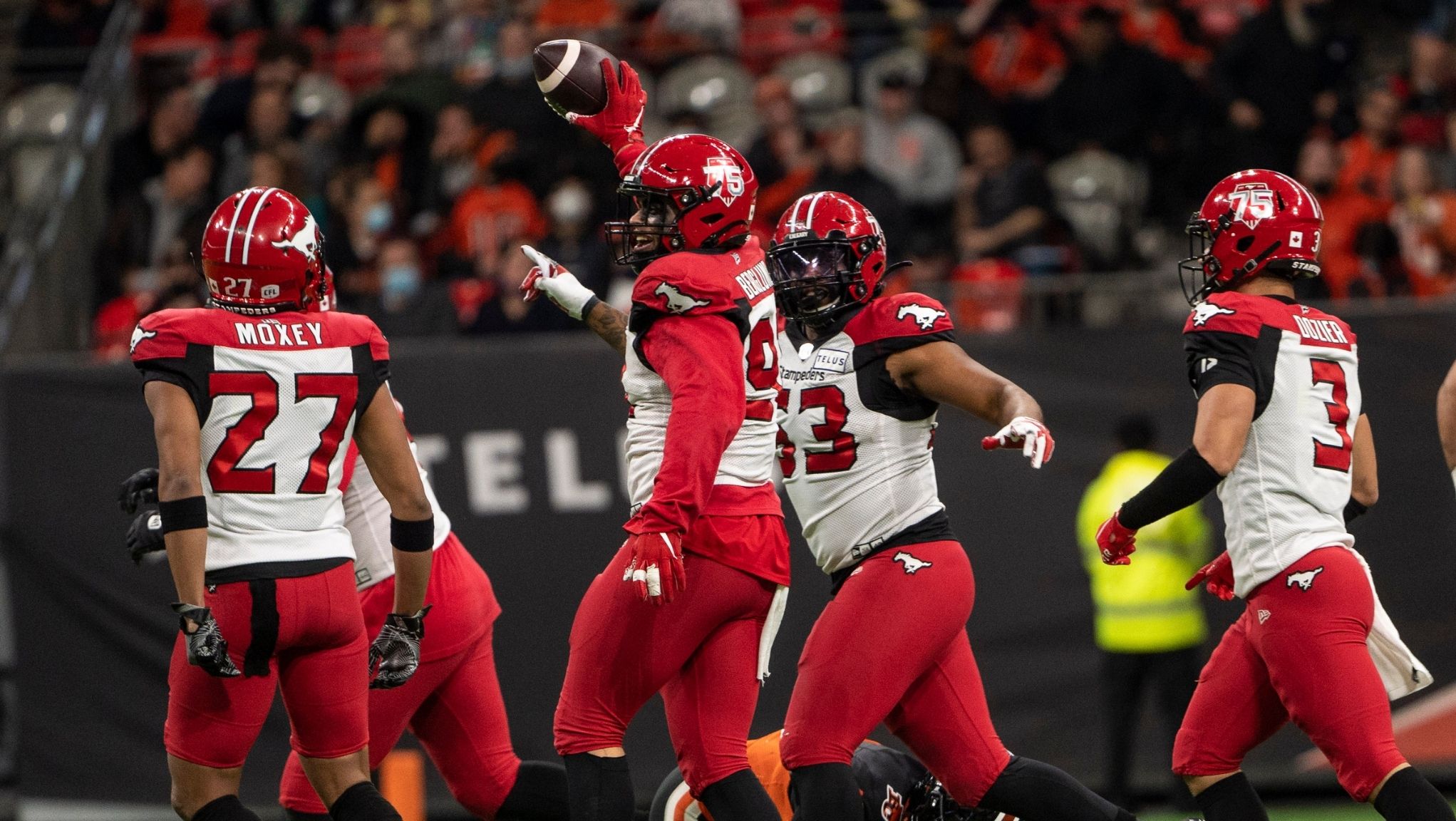 VANCOUVER — While clinching a spot in the playoffs is a significant achievement already, the Calgary Stampeders are hungry and still striving for more.

After starting the season 2-5, the team’s season series with the Saskatchewan Roughriders appeared to be a monumental turning point for the franchise. A 23-17 win against the Riders in the first of their three games sparked a winning streak for the Red and White, handing losses to the Riders again before downing the Lions on the road 39-10. Though the Stamps fell to the Riders in their final meeting, they have now been on the winning side of back-to-back games.

With a playoff appearance on the horizon, the job is not done for the Stamps.  In fact, the team believes that with the right adjustments, it could be just the beginning of something special.

RELATED
» Stamps down Lions to clinch playoff berth
» Through the Lens: Calgary at BC
» Boxscore: Stamps, Lions by the numbers
» Watch: Cottoy makes incredible dive into the house

“I’m proud of our guys, I’m proud of the performance, we came in and beat a team that was very desperate, played a good football game, I thought we played fairly well as well,” said Dave Dickenson to the media post-game. “No one is over the moon; we’re happy, we know this is the first step. Obviously, some other teams have already punched their ticket. We’re just going to try and win four more football games. We’ll start it out against Winnipeg next week and we’re trying to build on the momentum and see if we can win four in a row.”

If the Stamps are to run the table, Dickenson feels the team needs to continue to evolve and adapt to different situations down the stretch.

“We’re not even close to the team that we can be,” said Dickenson. “We just have to make sure we keep improving. Everyone that wins the Grey Cup is improving as the season goes on. Through the playoffs, they don’t stay static. If you stay static, someone passes you. I think we’ve got the horses, I think we’ve got the system, I think we’ve done it before. It’s going to be a tough road, we understand that. Looking forward to the opportunity though.”

Of those areas that need to be improved, Darnell Sankey, who finished the game with a team-high 12 tackles, believes it has to be the defence he leads after surrendering 473 yards to the Lions.

“We didn’t play the best today,” said Sankey to the media. “We didn’t have a good start, we didn’t really play our best ball. We’re going to have to come in to the film – enjoy the in for tonight – come in, watch some film and correct the mistakes we made because we made a lot. We can’t make those against Winnipeg.”

Additionally, Sankey thought the game against BC was a humbling experience after holding them to just 10 points in their Week 11 meeting

“I think we came in with our heads a little bit too high,” said Sankey. “They came out and punched us in the mouth. I think we had to be like, ‘Okay, now it’s a game,’ that was one of my fears coming into the game. It’s always like when you beat a team pretty good, that team is going to come back hungry. We’re just happy we got the win, we’ve got to embrace it, but we got a lot to fix.”

Offensively, the Stamps had one of their best nights through the air with Bo Levi Mitchell passing for a season-high three touchdowns and 264 passing yards. That said, Mitchell, much like his teammate, believes they can still be better.

“I thought we executed a lot, honestly,” said Mitchell post-game. “I think when we go back and watch the film, there’s going to be a lot of plays where we’re excited about what happened, there’s going to be some plays where we cringe where they could have been bigger. I think we’re balanced, I think we put the ball in a lot of different places that makes it very tough for a defence. I think everybody, all 12 guys, are just gelling, are feeling good and they’re just trying to get better.”

The Stamps will look to keep this momentum going next week when they take on the first place Winnipeg Blue Bombers at home next Saturday at 7:00 p.m. ET.