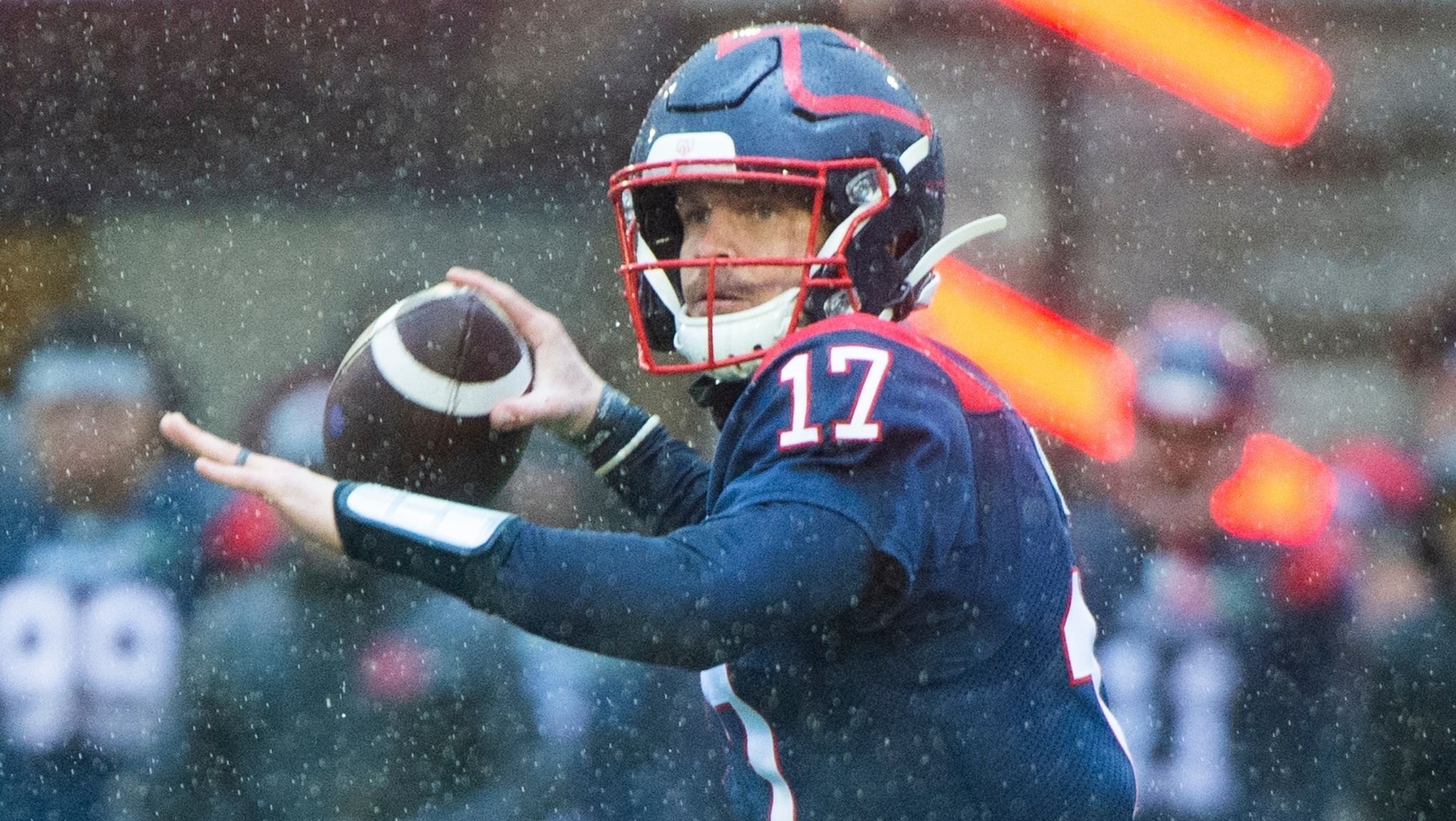 TORONTO — This week’s (early) picks are served to you on a Double Blue platter, alongside a hearty helping of crow for our pick makers.

The Toronto Argonauts went out and, as they have all season, defended their home turf with an impressive 31-12 win over their rivals down the QEW, the Hamilton Tiger-Cats. The win locked up first place in the East Division for them, slotting their next meaningful game at said fortress of football solitude on Dec. 5, leaving them just one more home win away from a trip to the Grey Cup. Just like we here at CFL.ca predicted.

The Argos shook off their critics last week with a thorough shutdown of Hamilton’s offence, highlighted by a nail-in-the-coffin pick six from DB Chris Edwards, who has made a habit of being in the right place at the right time throughout this season. McLeod Bethel-Thompson pulled himself out of his mini-rut (worth acknowledging here that the Argos have gone , making 76 per cent of his passes while throwing for 250 yards and a touchdown, with just one interception on the night.  With that win, the Argos ended discussion on East Division contenders. They are officially the team to beat if Montreal or Hamilton wants to play at Tim Horton’s Field on Dec. 12.

From all of that intensity, we go into a much different feeling Week 16. Edmonton plays a pair of games with no impact on the postseason this week, against the Argos on Tuesday and the Lions on Friday. Winnipeg and Calgary are in the same boat when they meet to close out the week on Saturday, with their respective playoff spots set.

The two games that we’ll be watching will involve those two other East Division teams with Grey Cup hopes. The Alouettes and Ticats still need to sort out who’s visiting who next Sunday in the Eastern Semi-Final. A Montreal win against Ottawa on Friday would force the Ticats to get a win on Saturday against the visiting Riders. If one of those two take a loss, they can start to get ready to play visitor next week. 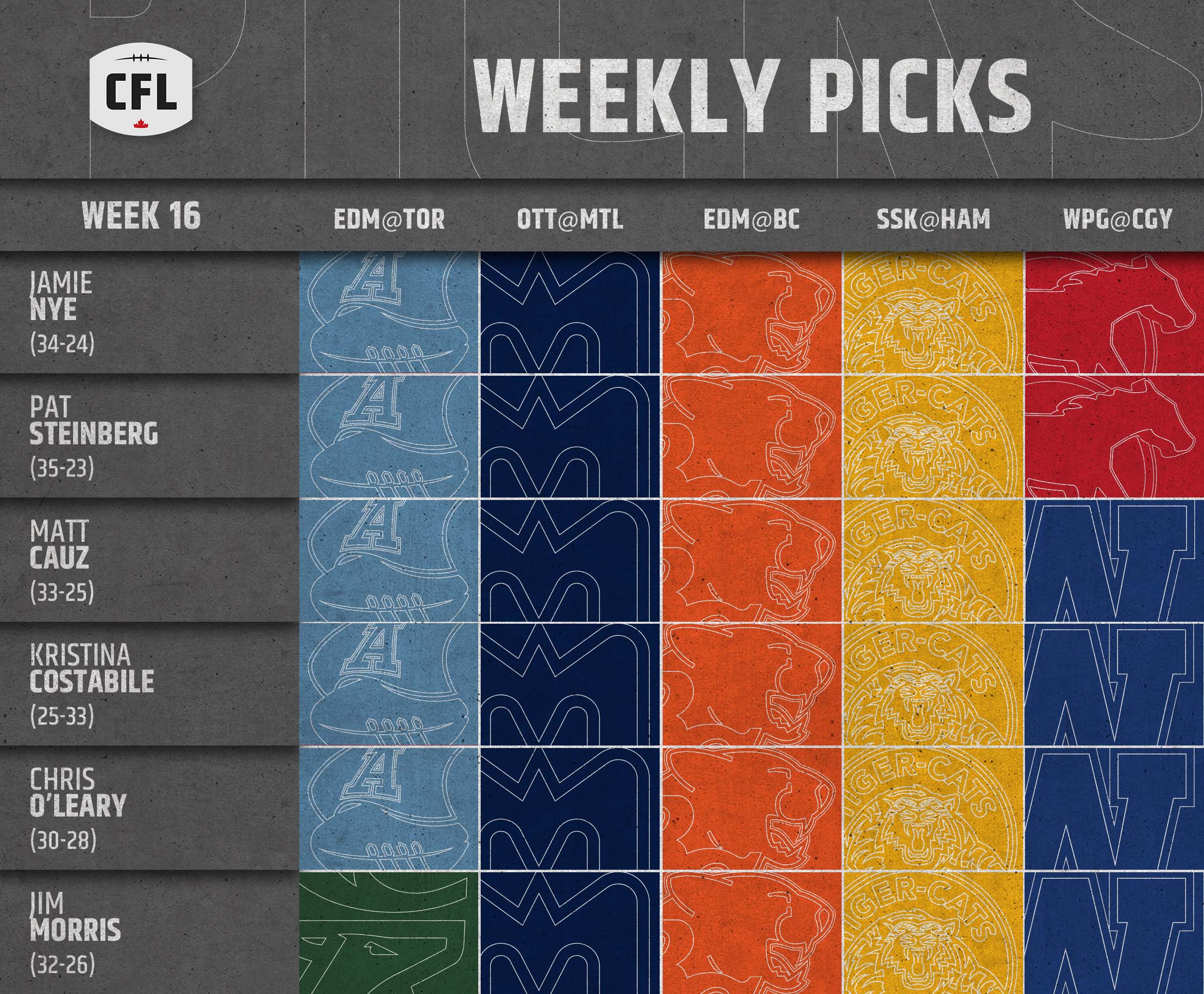 With the East Division secured, the Argos will start Antonio Pipkin in their regular-season finale on Tuesday night. While the Argos look ahead to the playoffs, the Elks may just be in grind-it-out mode, finishing out a disappointing season by playing their second of three games in a seven-day span, thanks to the rescheduling of their date with the Argos after their COVID cases piled up early in the season. Given the possibility of fatigue for Edmonton and keeping in mind the Argos’ perfect home record, the majority of the pick-makers went with the boatmen.

The REDBLACKS head into their season finale trying to end their six-game losing streak while evaluating their players for what could be an off-season of change. Their opponents, meanwhile, are in a different mindset. An Alouettes’ win at home on Friday and a Ticats’ loss on Saturday would let them leapfrog their rivals in the standings and host the Eastern Semi-Final for the second season in a row. Winning what should be a very winnable game would put the pressure on the Ticats.

We know the Elks have expanded rosters (allowed five more players this week) to accommodate the grind of a finish they have to this season, but we wonder just how up a team can be for a game like this. Both the Lions and the Elks are out of the playoff picture. BC has already announced that Nathan Rourke will get the start at QB and it seems unlikely that Edmonton would put Nick Arbuckle into a meaningless game when he’s still new in head coach Jaime Elizondo’s system. The Lions are at least at home and should be considerably more rested than their opponents. Those should be big advantages.

Should the Als take care of the REDBLACKS on Friday, we’ve got an interesting game in front of us in Hamilton on Saturday. The Riders have their home playoff game secured after last week’s win over Edmonton and it’s likely they rest some key players. The Ticats have some wounds to lick and some momentum to rebuild before they begin their postseason. That starts against a presumably undermanned Riders team and in a roundabout way, defending their homefield for the playoffs with a win.

The Bombers did not look like their Goliath, bully-in-the-schoolyard selves this past week against Montreal and big picture, they probably don’t care too much about that outcome or the end of their nine-game winning streak. With the team sitting and waiting through next week for the Western Final to kickoff, we do wonder if we’ll see some of those starters that rested last week. If we do, we think the Bombers get back in the win column, against a Calgary team that’s also probably thinking about their playoff game and just trying to get through game No. 14 on the schedule safely.