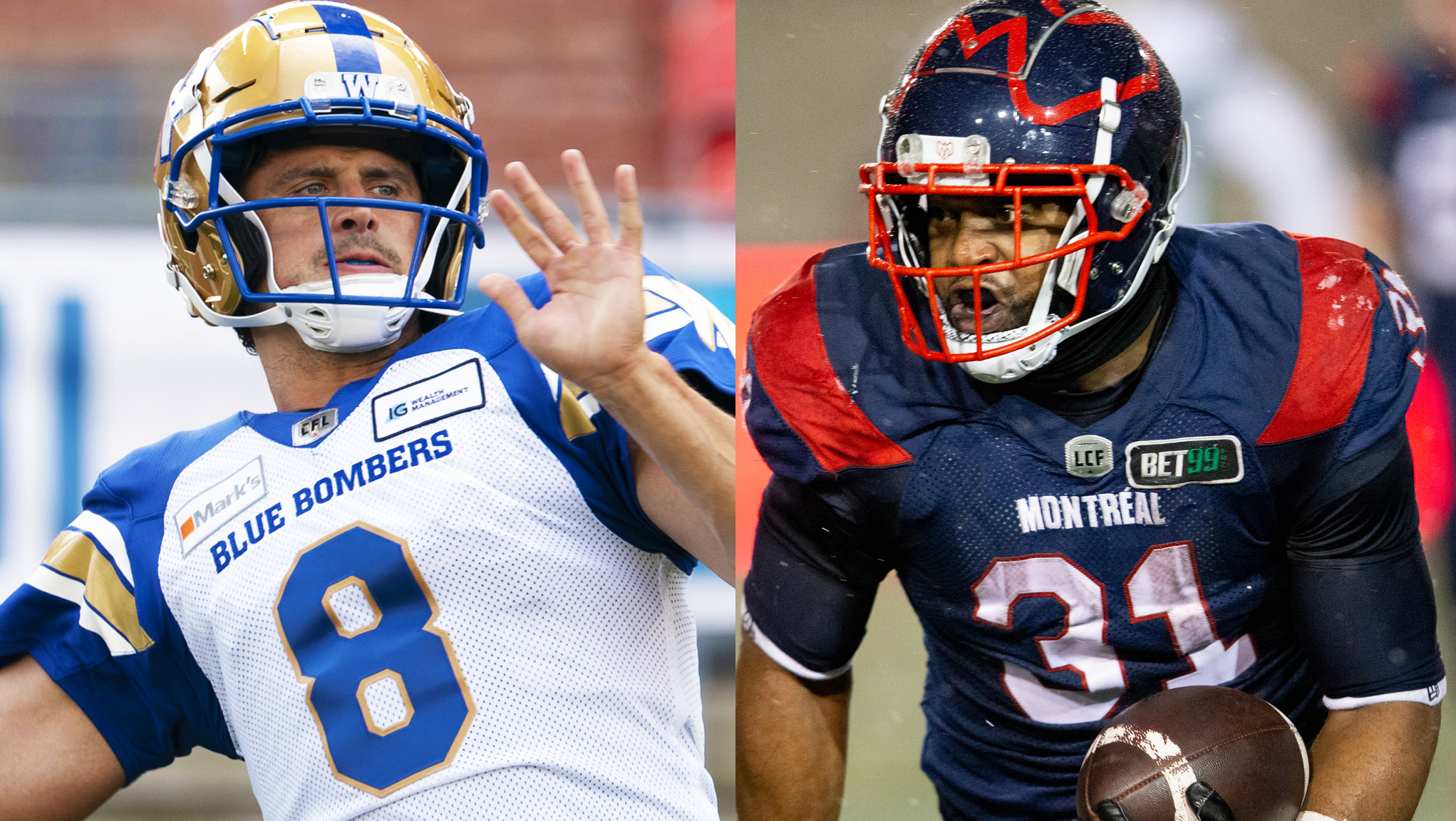 TORONTO — Montreal Alouettes running back, William Stanback, and Winnipeg Blue Bombers quarterback Zach Collaros will vie for the league’s top individual honour, the Most Outstanding Player award, at the 2021 CFL Awards. The evening ceremony on Friday, December 10 at 6 p.m. at the Hamilton Convention Centre serves as the marquee event during Grey Cup Week.

The CFL Awards recognize the league’s top performers in seven categories as voted by the Football Reporters of Canada and head coaches from across the league. In addition, the Commissioner’s Award, the Jake Gaudaur Veterans’ Award, the Tom Pate Memorial Award, the Hugh Campbell Distinguished Leadership Award and the Jane Mawby Tribute Award will honour individuals from across the CFL.

The 108th Grey Cup will be played at Hamilton’s Tim Hortons Field on Sunday, December 12, featuring Arkells in the Twisted Tea Grey Cup Halftime Show. A limited number of tickets are still available at ticketmaster.ca/greycup.

Members of the media must apply for credentials through the 108th Grey Cup media accreditation portal by the Monday, November 29 at 5 p.m. ET deadline. 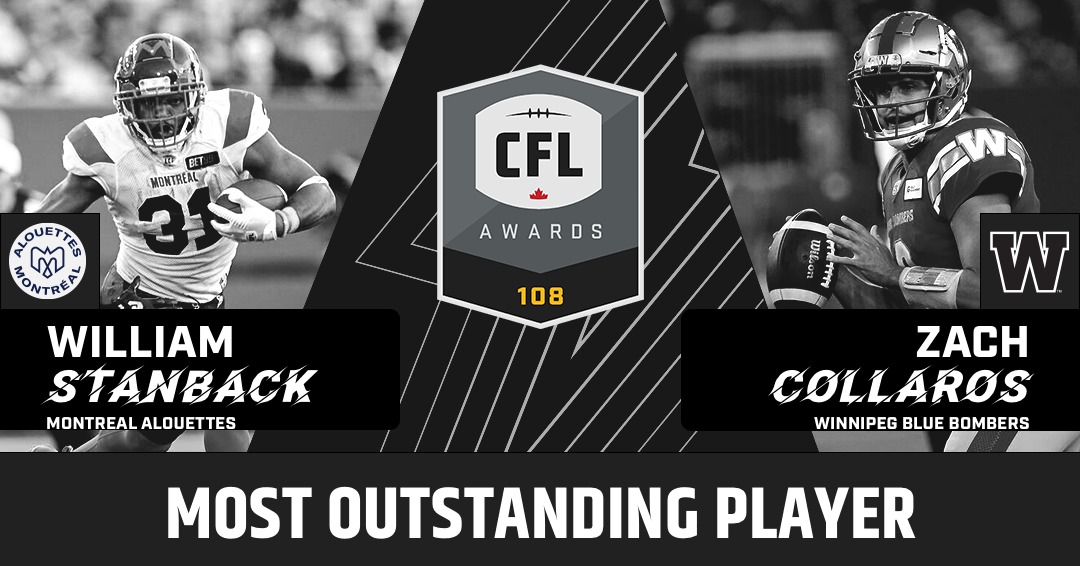 In 12 games played, William Stanback ran away with the CFL’s rushing crown, finishing with a career-best 193 carries and 1,176 yards – 307 more than this year’s runner-up. Among running backs who have played at least nine games in a season, his average of 98.0 yards per game is the highest since Jon Cornish in 2014. He led the CFL in 20+ yard rushes (seven) for a second consecutive season, totaling 19 over that span. The Hempstead, N.Y., native’s banner year included a 203-rushing yard performance to equal his personal record established in 2019. Stanback finished with a trio of touchdowns on the season.

In his first full campaign as Winnipeg’s starter, Zach Collaros led the league with 20 passing touchdowns – six clear of second-place – as the Blue Bombers finished with the CFL’s highest-scoring offence (23.0 points per game). The team ranked first in offensive touchdowns (35), yards per play (6.5) and committed the fewest turnovers (20). The 10-year veteran threw a career-high 70.2 per cent (243-of-346) and finished second in the league with 3,185 passing yards. 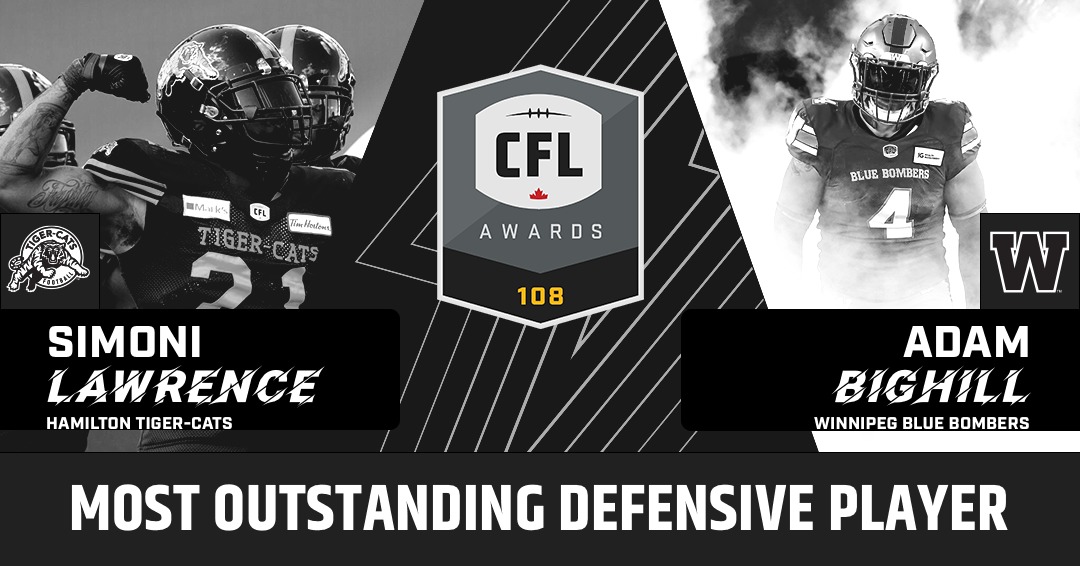 Simoni Lawrence anchored the Tiger-Cats’ defence, recording 73 tackles, four sacks, three interceptions and two touchdowns this season. The former Minnesota Gopher finished with 60+ tackles for the seventh consecutive campaign. The Tiger-Cats allowed the fewest rushing yards in the league (79.6 per game) and finished second in points allowed (17.4 per game). This is Lawrence’s third nomination for the award.

Adam Bighill helped lead the league’s most dominant defensive unit, collecting 70 defensive tackles, three tackles for a loss, two sacks and two interceptions this season. Bighill is a two-time Most Outstanding Defensive Player (2015 and 2018). Winnipeg allowed 13.4 points per game – the ninth lowest mark in CFL history and the lowest since 1970. The team led the league in lowest opponent net offence (281.3 yards per game) and passing yards allowed (216.4 yards per game).

Lawrence and Bighill went head-to-head for the award in 2015. 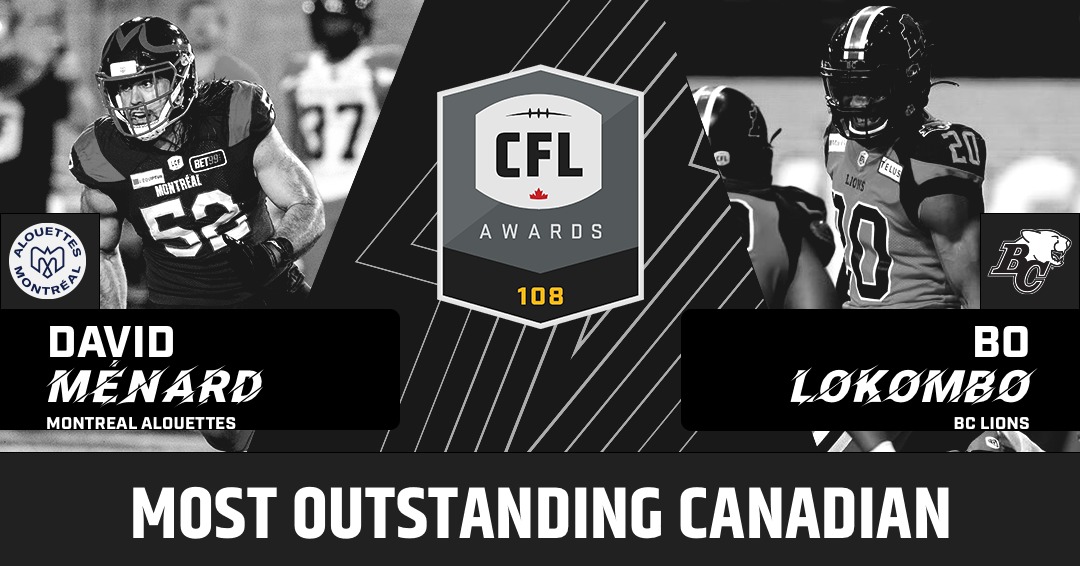 David Ménard’s career-high eight sacks led the way as the Alouettes topped the CFL with 49. The Chicoutimi, Que., native added a personal-best 18 tackles, as well as, two forced fumbles, a pass knockdown and a tackle for a loss.

Despite the shortened season, Bo Lokombo fell just five tackles shy of his career-high of 71, while equaling his personal-best in sacks (four) and establishing a new benchmark in interceptions (three). The six-year veteran finished sixth in defensive plays (92), while adding his first career touchdown. The former Oregon Duck also notched 11 special teams tackles. 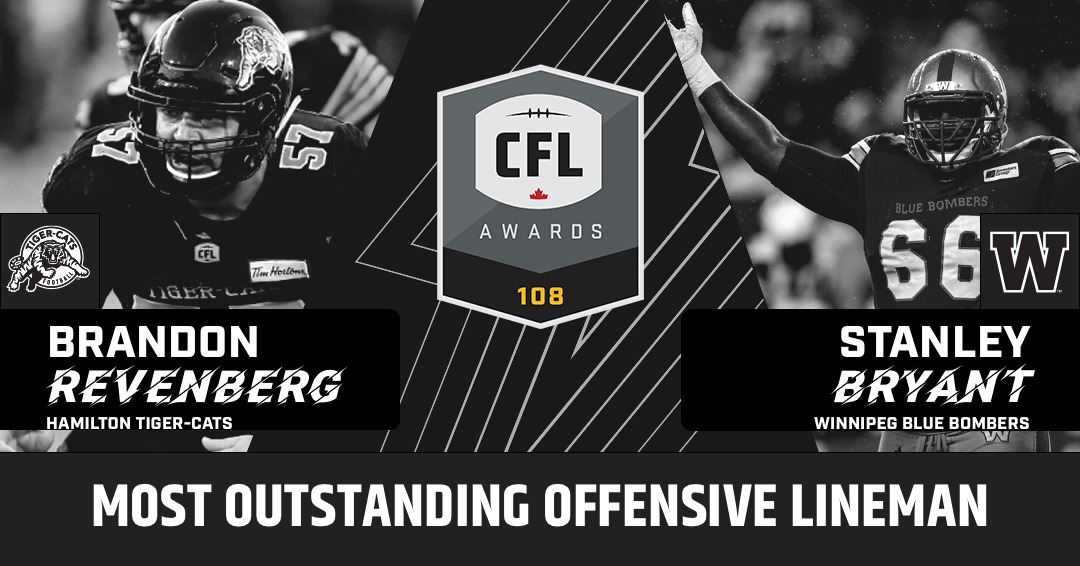 This is Brandon Revenberg’s second nomination for the award. The Essex, Ont., native guided the Tiger-Cats to the East Division’s second seed. Hamilton finished with the second highest pass efficiency and the second-best pass completion rate, while averaging more than 100 rushing yards per game.

Stanley Bryant has been named the West Division nominee for a fourth consecutive season with his lone win coming in 2019. The former East Carolina Pirate led a Blue Bombers offensive line that allowed a league-low 16 sacks, while topping the CFL in offensive points (23) and finishing second in rushing yards (119.7).

Revenberg and Bryant were named finalists for the award in 2018. 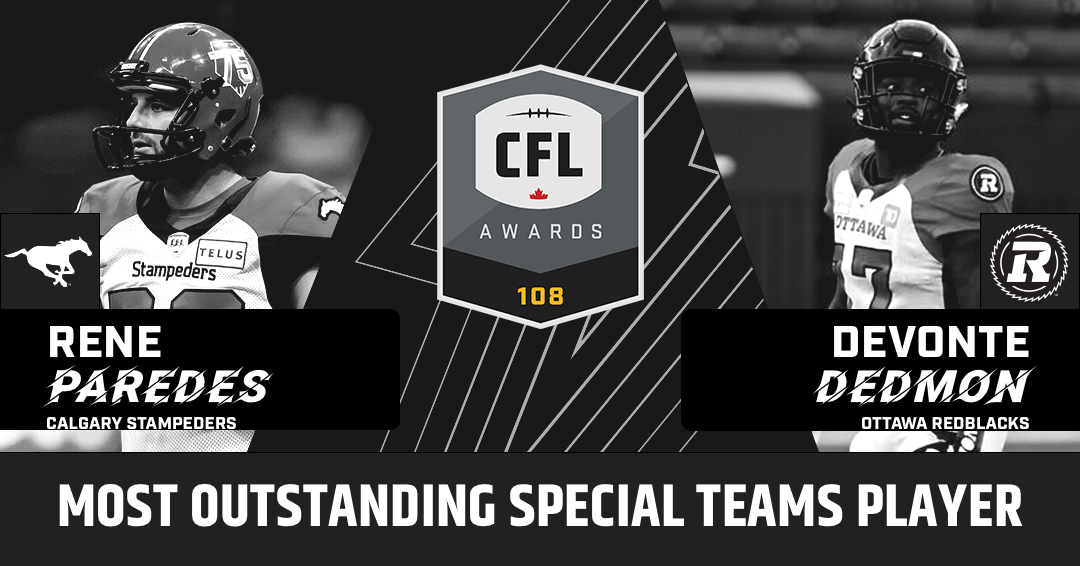 Rene Paredes made 44-of-48 field goal attempts (91.7 per cent) en route to 155 points. The former Concordia Stinger matched his career-high of six field goals twice. His 21 points in Week 11 established a new personal best for the 10-year veteran. 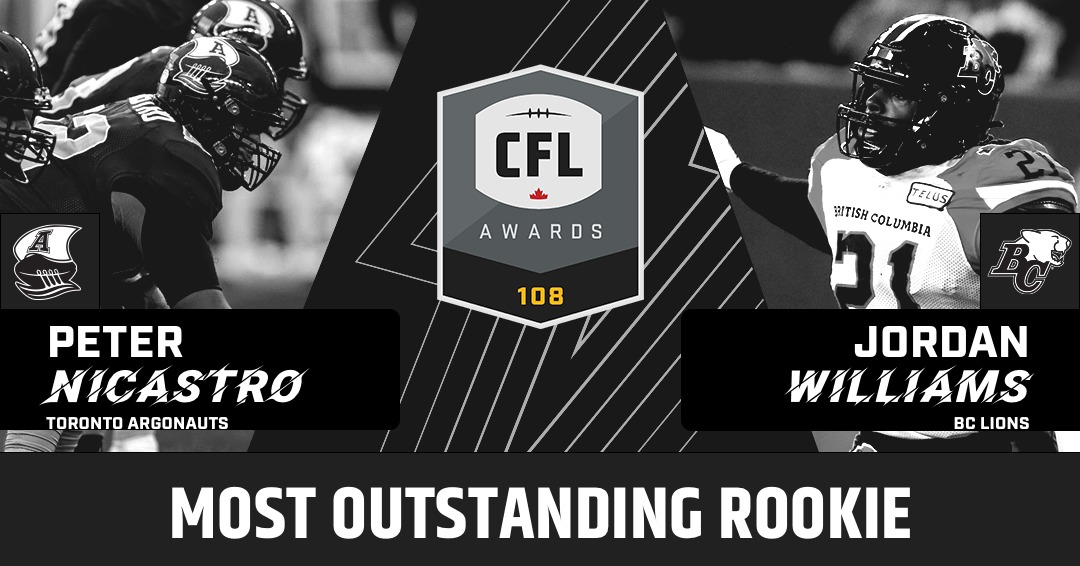 Peter Nicastro started in each of his 11 games played this season. The 2021 seventh overall selection, who starred for his hometown Calgary Dinos, was an integral part of an offensive line that allowed the third fewest sacks (32), while recording the second most first downs (294) and the third most passing yards (3,664).

In 14 games, Jordan Williams collected 92 defensive tackles to finish second in the league, breaking the Canadian rookie record of 75 (in 18 games) set by Mike O’Shea in 1993. The Sacramento State product added five special teams tackles, two knockdowns, a sack and an interception on the year.

This is the second time in CFL history that two Canadians will compete for the league’s top rookie honour. Orville Lee and Jeff Fairholm were finalists for the award in 1988. 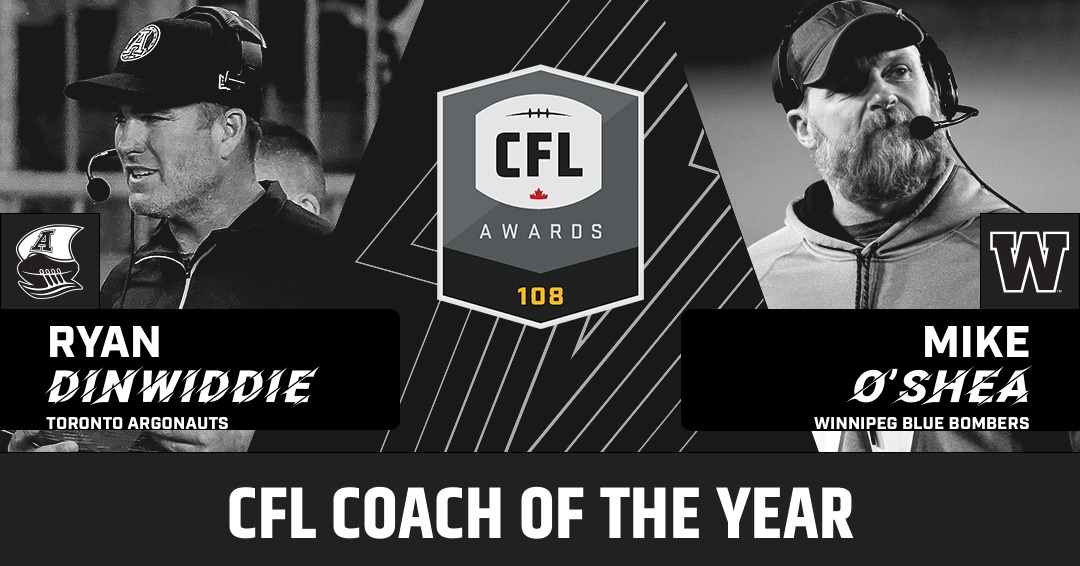 In his first season at the helm of the Argonauts, Ryan Dinwiddie captained the team to a 9-5 mark to sail away with the East Division crown. Toronto went 6-1 at home and finished with a 6-2 record against east opponents. The Elk Grove, Calif., native successfully turned around a team that finished 4-14 in 2019.

Mike O’Shea led Winnipeg to a league-best 11-3 record, including a perfect 7-0 performance at IG Field and an 8-1 mark against divisional opponents. The North Bay, Ont., native is the longest-serving coach in the CFL with seven seasons. His 0.786 winning percentage in 2021 surpassed his previous best of 0.667, set with a 12-6 record in 2017.