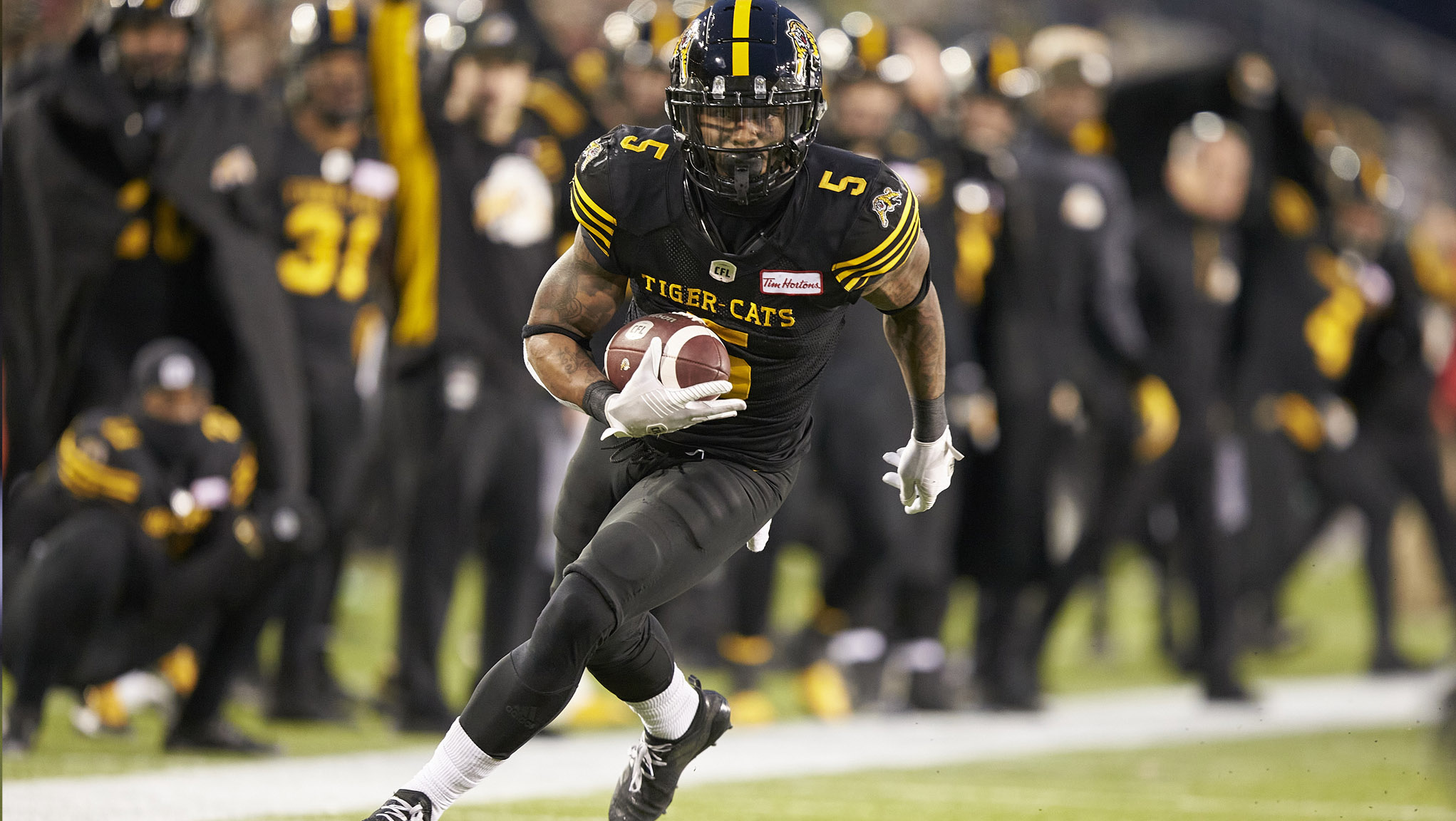 Six will turn into four, which will shape itself into two, ultimately leaving one team standing.

Semi-Final Sunday is approaching, with the winners bound for Toronto and Winnipeg, respectively, for next week’s Division Finals. CFL Fantasy football users whose pools have carried into the postseason still have time to either stay atop the mountain or find themselves yanked off the perch, while fantasy pools that start anew mean everyone has a chance to feel as if they’re hoisting their own Grey Cup on December 12.

Jackson is a strong value play as he will get the chance to run against a Montreal defence that allowed a league-high 14 rushing majors. After missing Week 15, Jackson returned to the Ticats’ lineup in the regular-season finale against the Roughriders and rushed for a touchdown while accounting for 72 yards from scrimmage. Hamilton’s offence played its best ball down the stretch with Jackson as the starter, as he combined for 200 yards and a major on 30 carries in Weeks 13 and 14.

Hamilton finished fourth in rushing yards per game and third in yards per carry. The addition of receiver Bralon Addison ($10,818) means the Tiger-Cats will finally have the offensive lineup it envisioned back in August, as the presence of Addison — along with Brandon Banks ($6,688) and the underrated Tim White ($6,422) — gives pivot Jeremiah Masoli ($10,311) the diversity the unit has lacked for much of the season. A Ticats’ passing game clicking on all cylinders translates well for Jackson to find himself in favorable matchups as both a runner and receiver.

Despite throwing for five touchdowns in the past two games, there’s a sense of risk in playing Harris, especially since the Harris of old wasn’t seen often during the regular season. Harris had just one game of better than 20 fantasy points and that was back in Week 5 against a Calgary defence that looked far different. The 398-yard effort was the last time Harris threw for over 300 yards and that includes a three-game stretch in which he failed to exceed 177 yards.

Montreal will obviously stake its fate in the running of William Stanback ($8,236). While the potential Most Outstanding Player candidate led the league in rushing, Hamilton held him to a combined 99 yards on 24 carries during his two regular-season collisions with the Ticats’ D.

If Hamilton continues its trend of making Stanback grind out hard-earned yards, the pressure is going to fall on Harris to keep the Als in the game. Big plays will be tough to come by, as the Tiger-Cats allowed a league-low nine passes of better than 30 yards; yet another reason to look elsewhere for production at pivot. 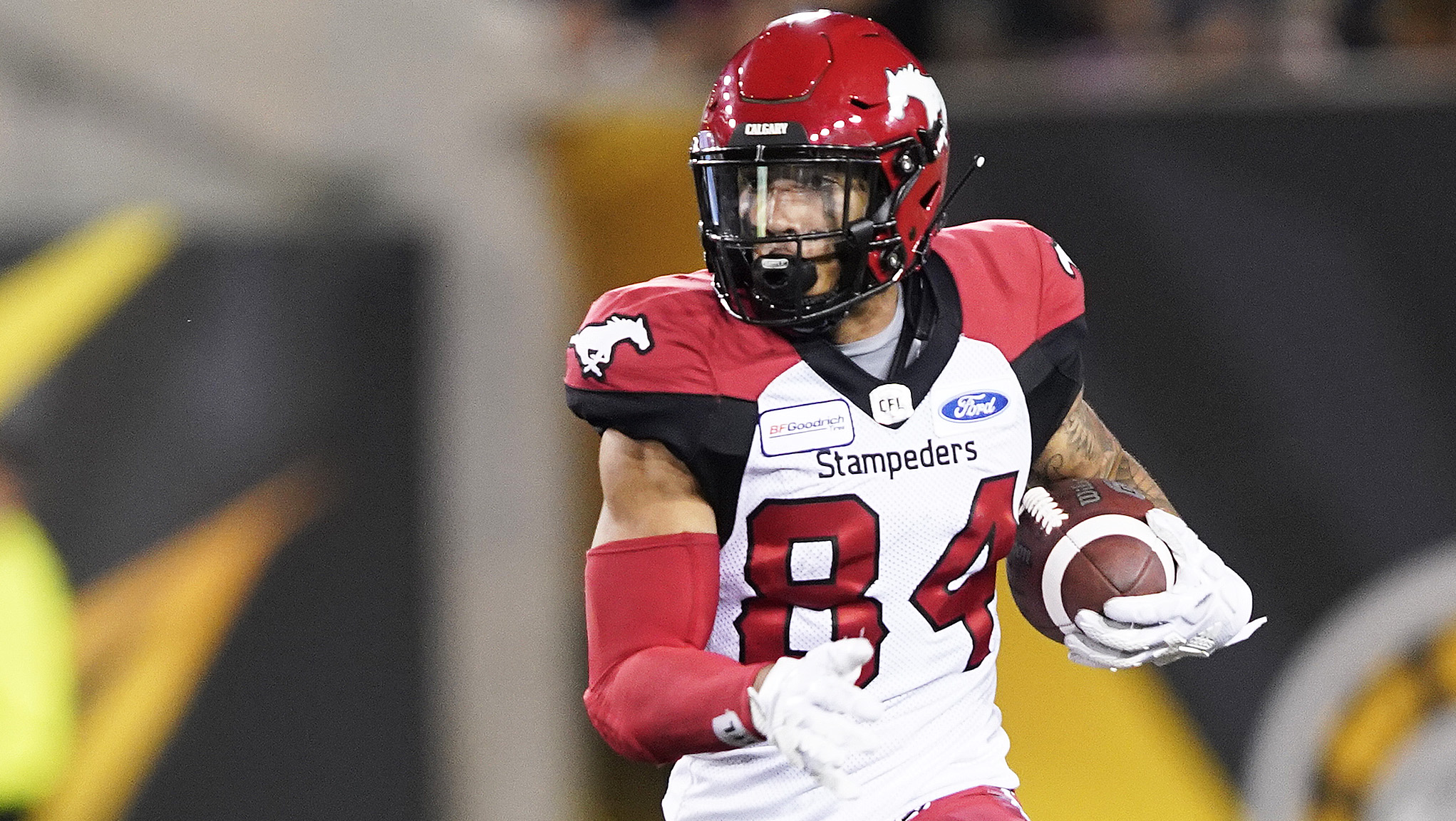 Reggie Begelton could be a big postseason spark for Bo Levi Mitchell and the Stamps in Sunday’s Western Semi-Final in Saskatchewan (Geoff Robins/CFL.ca)

Bo Levi Mitchell’s ($7,520) best game of the season coincided with the return of Begelton to the Stampeders. The former all-star caught seven passes for 119 yards and a major in the Week 15 win over BC on a night where Mitchell recorded his only game of better than two touchdown passes along with scoring better than 20 fantasy points (22.6).

Calgary fans — and Begleton users — have every reason to feel enthused. The revived Stampeders’ passing game faced a suspect Roughriders’ pass defence that yielded a league-high 273.6 passing yards per game and tied Toronto with 24 completions allowed of better than 30 yards. Begelton will see single coverage at times since Saskatchewan cannot afford to roll multiple defenders on him while freeing up Kamar Jorden ($7,745) and Markeith Ambles ($6,036), the latter of whom finished 10th in the CFL with 54 receptions.

The Stamps are in a position to play uptempo, a feeling they did not have before the return of Begelton, who is not only an outstanding fantasy play but also the X-factor in Calgary’s bid at returning to the Grey Cup.

Fajardo’s fantasy value hinges primarily on his ability to run for touchdowns, a fact he has not realized since Week 8. The Roughriders sit seventh in the league in points per game at 20.7 and only Ottawa produced fewer offensive yards per game than Saskatchewan’s 307.6 yards per outing.

The three touchdown passes Fajardo threw in Week 15 was only his third game of multiple TD tosses this season; he also has not thrown for more than 300 yards since Week 3, which happens to be the only time he’s done so in 2021.

Saskatchewan’s receiving corps has flashed potential at times, yet the Riders have managed a mere 12 completions of better than 30 yards. Saskatchewan leads the league with a 69.5 percent completion rate, yet far too many have been of the underneath variety. Calgary has had its moments against the pass in 2021, but they are still the Stampeders, evidenced by the mere 13 passing majors they have allowed.

Without question, Fajardo can have a huge fantasy outing, but too much would have to go right for that to happen. There’s no reason fantasy users should hang their hopes on that unlikely scenario.