TORONTO — The 108th Grey Cup will kick off with a trio of Canadians in a pair of unforgettable performances to welcome fans to Canada’s biggest party. The Canadian Football League (CFL) is proud to announce that GRAMMY-nominated Steven Lee Olsen will be joined by Platinum-selling special guest JESSIA to headline this year’s SiriusXM Grey Cup Kickoff Show before JUNO Award winner Savannah Ré honours the nation with the singing of O Canada.

“It’s such an incredible honour to be playing the Grey Cup,” said Olsen, whose hit What You’re Made Of is heard weekly by fans across the country as the CFL ON TSN’s Song of the Season. “There’s nothing like music and sports to bring people together, and there’s no better place to do that than at the Grey Cup! I know how much the CFL means to Canadians and to the country, and I can’t wait!” 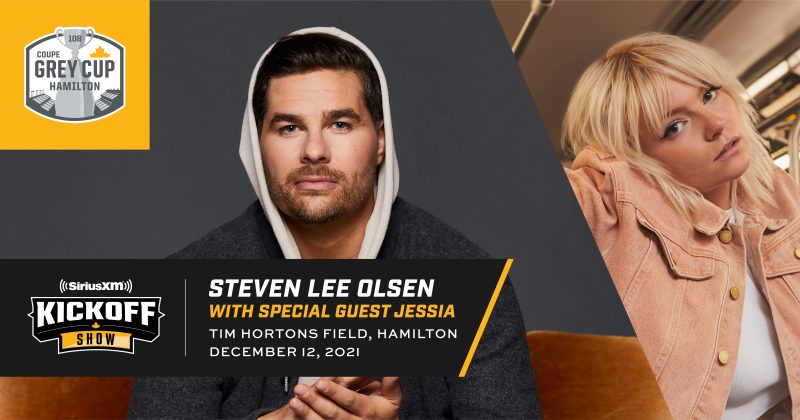 Olsen’s latest EP, Thinkin’ Bout You, includes What You’re Made Of and his current single, Relationship Goals. In addition to his powerful live performances and over 35.5 million cumulative streams to date, the Universal Music Canada artist and songwriter’s number one hits have dominated the airwaves, including the double-Platinum certified Blue Ain’t Your Color performed by Keith Urban, More Girls Like You performed by Kip Moore, and the Platinum hit, Drop, performed by Dallas Smith. The Newmarket, Ont., native will be celebrating the holiday season with his newest releases, Christmas is Hitting me Different and White Christmas.

Olsen will be joined onstage by Platinum-selling pop songstress JESSIA for a special performance, marking the first time the two Canadian artists have appeared on the Grey Cup stage.

“It’s been a whirlwind year, and I can’t think of a more perfect way to celebrate than playing the Grey Cup,” said the Vancouver-based singer/songwriter. “The Grey Cup is one of those huge moments and opportunities that you never forget. CFL fans will think back to 2021 and say, ‘I was there!’ and I’ll always remember this special night and think ‘I performed there!’”

JESSIA has garnered over 231 million global streams to date through unapologetic pop anthems like her debut single, I’m not Pretty (Artist Driven Records in partnership with Republic Records/UMC). The certified Platinum hit drew the praise of music critics and industry experts, resulting in a collaboration with GRAMMY-nominated artist Bebe Rexha on the remix. Her recently released debut EP, How Are You? features the new single But I Don’T.

“Every year, the SiriusXM Grey Cup Kickoff Show presents one of the biggest platforms for Canadian artists to share their stories and reach new fans,” said Paul Cunningham, Senior Vice President, Sales & Marketing of SiriusXM Canada. “Steven Lee Olsen and JESSIA sharing the stage will make for an unbelievable evening to remember.”

Completing the trio of dynamic openers will be Universal Music Canada artist, Savannah Ré, who will set the stage for the CFL’s championship contest with a stirring rendition of O Canada.

“Singing the national anthem is an absolute privilege,” said Savannah Ré. “This beautiful country is our home, and whatever challenges we face as people, as communities or as cultures, we face them together, united as Canadians. To me, the anthem represents where we’ve been, our growth and our ability to improve. It’s our promise to be better and to build a stronger Canada, and I can’t wait to proudly make that promise on the Grey Cup stage.”

The Torontonian captured the hearts of Canadians in 2021 and earned the first-ever JUNO award for Traditional R&B/Soul Recording of the Year with her hit Solid. The single was released on her critically acclaimed debut EP Opia, which also features Where You Are, Homies and Best Is Yet To Come. The singer/songwriter’s breakthrough year was highlighted by nominations for the JUNO for Contemporary R&B Recording of the Year, the SOCAN Songwriting Prize, the Slaight Music Emerging Songwriter Award, the Polaris Music Prize, and two Prism Prize awards.

“The Grey Cup is the ultimate celebration of not only football, but also Canada,” said Tyler Mazereeuw, Chief Revenue and Marketing Officer of the CFL. “The opportunity to showcase three tremendous Canadian talents, and to have their energy coursing through the crowd will be the perfect way to kickoff the big game.”

The SiriusXM Grey Cup Kickoff Show and the singing of the national anthem are the latest milestones in the CFL’s ongoing relationship with Universal Music Canada, which has included in-game broadcast music, the stadium concert series, and collaborations with the league’s nine clubs.

Olsen, JESSIA and Savannah Ré join the previously announced Arkells, who will be coming home to Hamilton to play the Twisted Tea Grey Cup Halftime Show. The 108th Grey Cup from Tim Hortons Field will air live on Sunday, December 12 at 6 p.m. ET on TSN and RDS – Canada’s home of the CFL. A limited number of tickets are available at ticketmaster.ca/GreyCup.

The 2021 edition of Grey Cup Week will feature a number of free fan events, including the CFL Awards, the Grey Cup Arrival delivered by Canada Drives and the Commissioner’s Fan State of the League address, as well as fan favourite celebrations, such as the Spirit of Edmonton events, the CFL Alumni Association Legends Luncheon, and much more. Additional details and registration information can be found at greycupfestival.ca.