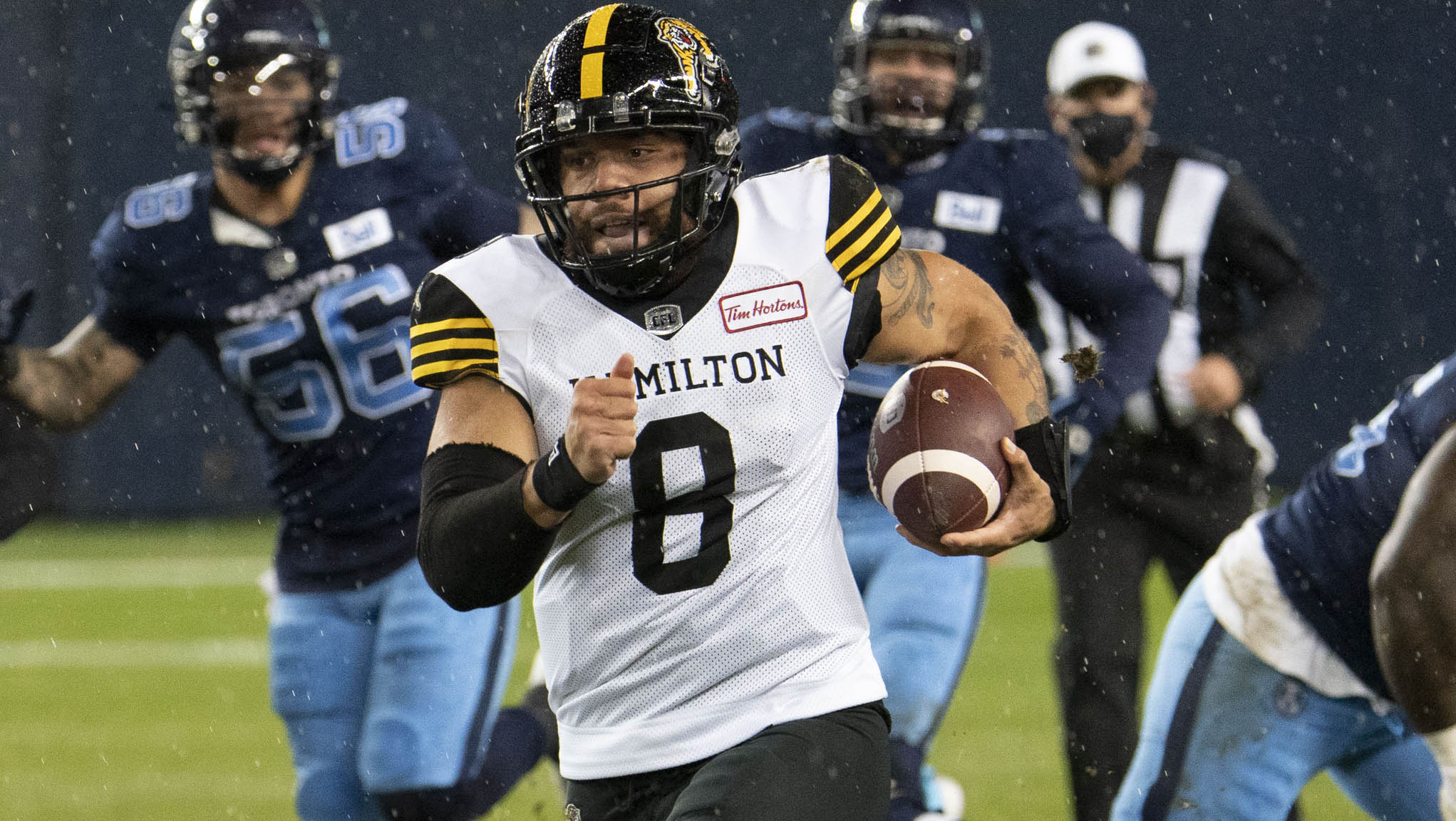 We’ve reached the final four portion of the 2021 season.

The home teams triumphed in the Eastern and Western Semi-Finals, with Hamilton putting away Montreal and Saskatchewan pulling out a dramatic OT win over Calgary, setting the stage for a pair of big games that will take us to the 108th Grey Cup in Hamilton on Dec. 12.

The Riders get to pay a visit to their nemesis in Winnipeg, a team that’s had their number all season and all of the 2019 season, if you look back on it.

The Ticats make the trip up the QEW to visit their arch rivals in Toronto. The Argos took their season series 3-1, including a convincing Week 15 win that locked up first in the East Division.

As we head into these two big matchups, here are five storylines to follow for the week.

Usually when we’ve got an offering of the Riders and Bombers and the Argos and Ticats, our thoughts go to hot, end-of-summer days at the midpoint of the season. It’s a treat to see the four of these teams battling for spots in the Grey Cup, under varying winter conditions. Toronto is expecting a temperature of zero C that feels like minus-three, with 1-3 cm of snow. In Winnipeg, fans are looking at more traditional winter conditions, with scattered flurries and a minus-nine C temperature that will feel like minus-14.

Both games could present challenges to the players but given the time of year they’re being held, Canadians know that the weather could be much, much more harsh.

A COUPLE OF RODNEY DANGERFIELDS IN ACTION

It was a theme that the Roughriders spoke openly about all week leading into their game against the Stamps. A nine-win team that was hosting a playoff game had received a lot of questions about how good it really is. Cody Fajardo and Co. certainly used it as a rallying point and the more they talked about it, the more it echoed over to the East Division. The Argos also finished with a 9-5 record but have been questioned through much of their journey this season, with fans and pundits wondering if the team can make a run in the playoffs against a more experienced Ticats team.

The questions around the Riders generally linger around offensive production and a lack of big plays through the season. Saskatchewan’s offence wasn’t pretty on Sunday, but Fajardo got the team to the end zone enough to put them in a position to win, with Brett Lauther‘s OT field goal sealing the deal for them.

The biggest concern over the Argos seems to be its talented roster figuring out what it is. Its offensive production is spread across the board and the team made a mid-season switch at quarterback, going with McLeod Bethel-Thompson and eventually trading Nick Arbuckle to Edmonton.

It’ll be interesting to see if the Argos take a similar I-get-no-respect approach this week.

Everyone knows the Yogi Berra quote about baseball being 90 per cent mental and 10 per cent physical. The last time the Riders beat the Bombers was on Oct. 5, 2019. The Bombers got revenge in their next meeting, in the Western Final at Mosaic Stadium, en route to their Grey Cup win.

This year, the Bombers topped the Riders in Week 4 and 5 matchups, in a combined score of 56-17. Despite not playing football in 2020, the Bombers have come back and grown from their 2019 championship run. On Sunday night, coach Craig Dickenson called the Bombers the Goliath of the CFL. Riders’ DB Ed Gainey pointed to the free agency departure of Willie Jefferson, saying ever since the former Rider moved one province to the east, they haven’t been able to beat them.

Getting over the hump against the Bombers — even once in the regular-season this year — could have been the clearing of a big mental hurdle for this Riders team. Though if they were to do it on Sunday, it might do wonders for their confidence in the Grey Cup game.

Young teams with championship dreams often run into a powerhouse obstacle in their quest to win. We saw the Edmonton Elks deal with this with the Calgary Stampeders in 2014 before getting the best of them a year later. The example I always think of is Michael Jordan’s Chicago Bulls of the late 1980s running into the Detroit Pistons and failing year after year before breaking through in 1991. We all know what followed there. Are the Riders at that point yet? Can the Bombers’ grip on their perch atop the league be loosened? We’ll find out in the Western Final.

AN EDGE FOR THE RIDERS?

On the field, we saw a great show of confidence from Riders’ kicker Brett Lauther on Sunday, as he strolled out in double OT, fully knowing he was going to make that 34-yard field goal to extend his team’s season. After he made the kick and the penalty on the play was deemed to go to Calgary, Lauther pointed at the imaginary watch on his wrist, letting everyone know this was his time.

That confidence gave way to some humility and appreciation for the moment by the time he got to his post-game interview. The Truro, N.S. native talked about his journey — he was on and off of practice rosters from 2015 to 2018 before landing with Saskatchewan — and how appreciative he was to have the opportunity to win a game like that for his teammates and the province.

You’re only as good as your last kick in football, but Lauther brings some great momentum into the Western Final and when you look at the Bombers, their one sore spot this season sits in their kicking game. Tyler Crapigna was lost to injury early in the season. Rookie Marc Liegghio (5-8 on field goals) gave it a shot, before Ali Mourtada took over and went 8-15. Sergio Castillo was signed on Oct. 19 and has gone 7-9, for a team-high 78 per cent.

Lauther is 40-47 on field goals this year, for 85.1 per cent. If it’s close on Sunday, you can bet Lauther will be more than ready to try to put it away.

The Ticats had a golden opportunity in Week 15. They traveled to Toronto for a first-place showdown with the Argos. The result: A 31-12 loss, left a bitter taste in the mouths of the reigning East Division champions, who can only claim a single win in the four matchups they’ve had with the Argos this year.

The Ticats will at least roll into BMO Field with some good momentum this week, after a defensively-driven win over the Montreal Alouettes. The Ticats forced five turnovers in the win and shut down the league’s leading rusher in William Stanback (46 yards on 16 carries).

The defence may have made it an easier day for Jeremiah Masoli, who was stymied by the Argos’ defence in the Week 15 loss. Masoli will have to play at a higher level against the Argos, who added defensive guru Chris Jones as a consultant during the season. If the Ticats’ defence can turn it up for a second week in a row and make life uncomfortable for Bethel-Thompson and Masoli can in turn find success against Jones’ defence, the visitors would have a shot at playing at home for a Grey Cup a week later.