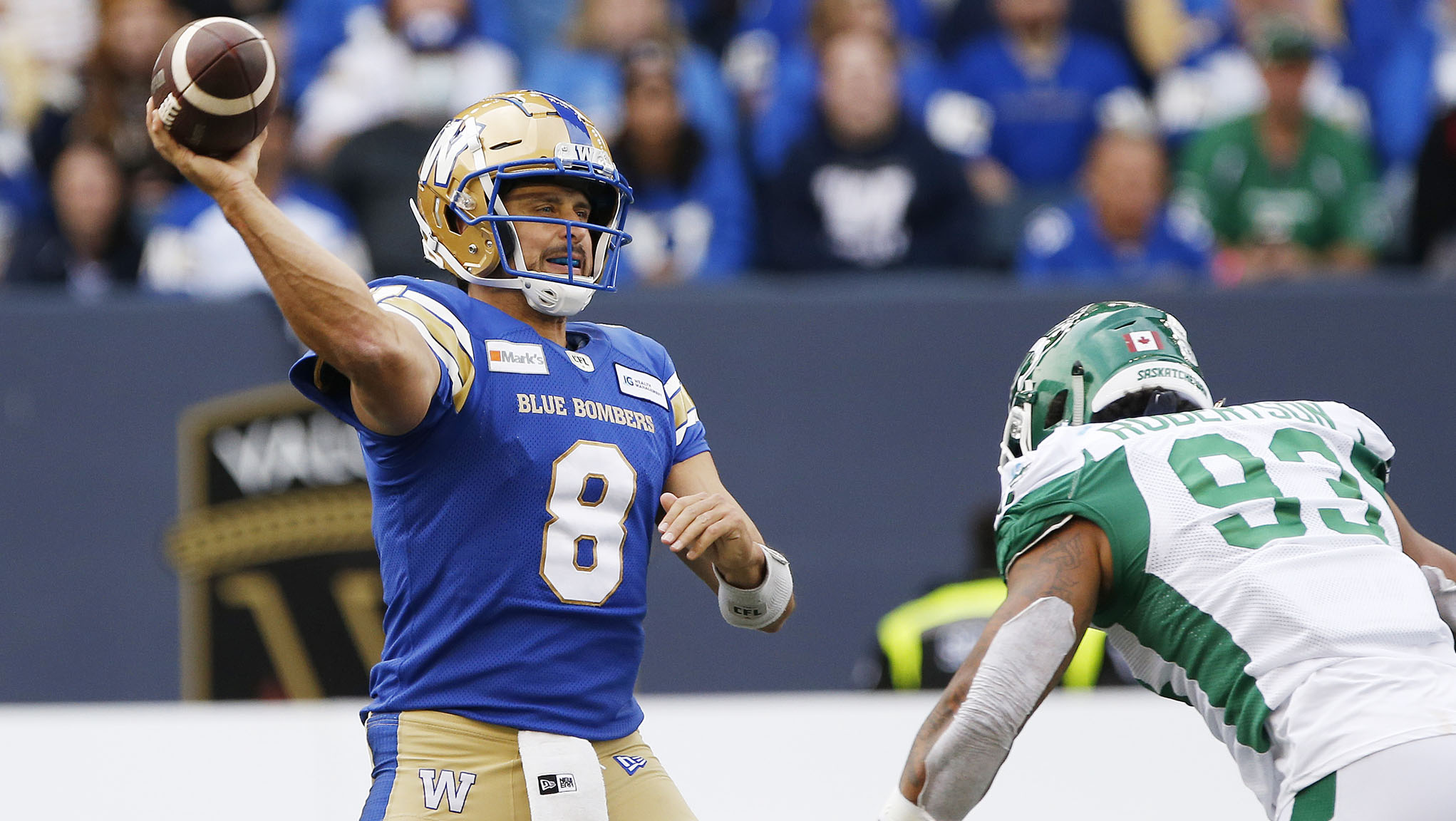 TORONTO — The anticipation is building by the day as we get closer to our Eastern and Western Division Finals on Sunday.

A pair of longtime rivals are the final four teams standing and on Sunday we’ll find out which of those two make it to the 108th Grey Cup next week in Hamilton.

If you’re looking for sound, stable and successful advice, look no further than our Jamie Nye. Tied for first-place with Pat Steinberg with a 39-26 record, Jamie was the only one of the six CFL.ca writers that went 2-0 last week, wisely taking the Ticats and Riders to hold court at home. This week they’re both on the road, heading into Toronto and Winnipeg, respectively, to take on the first place Argos and Bombers.

Home field didn’t carry quite as much weight in the East with the pick-makers as it did in the West this week, despite the Argos’ 6-1 record at BMO Field. Just about everyone is on board with the Bombers hosting at IG Field, a place where they haven’t had the taste of defeat all season. The last time the Bombers lost at home was Sept. 27, 2019. That Week 16 loss to Hamilton came a couple of weeks before the Bombers traded for Zach Collaros.

The Riders have a hill to climb this week and they seem to recognize that. The Ticats have a hill of their own, having dropped three of their four meetings with the Argos this season, including their Week 15 encounter that clinched first in the East for the Double Blue.

We’re just days away from having answers and knowing who will be playing for the Grey Cup, setting up a true Sunday Funday.

RELATED
» Head to Head: Who has the edge in the Eastern and Western Finals?
» CFL Pick ‘Em: Make your picks for the divisional finals!
» Weekly Predictor: Betting on the Ticats 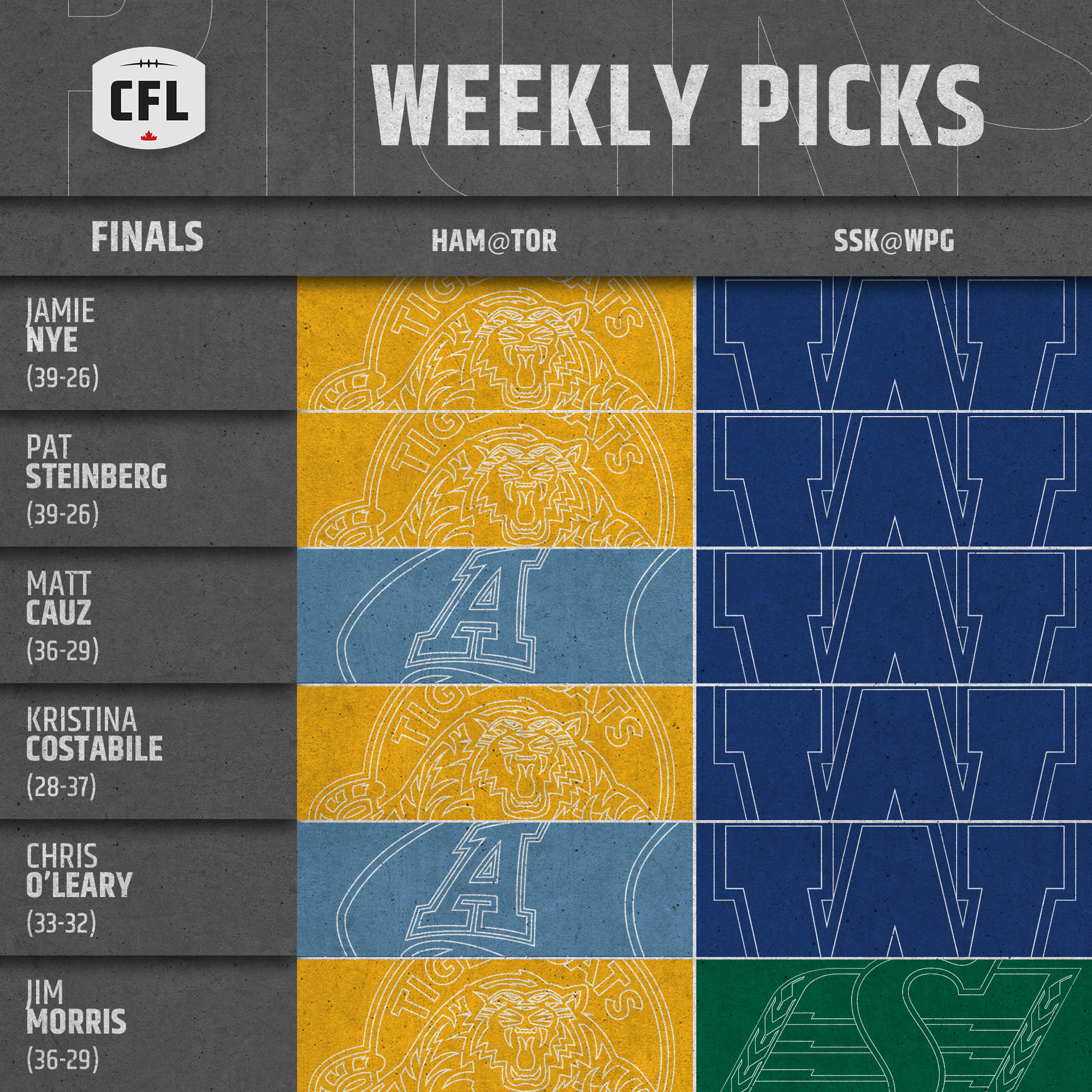 The Argos might have one of the most underappreciated home field records in recent league history. Standing at an impressive 6-1 — the blemish coming in a meaningless end-of-season tilt with Edmonton — they won’t be an easy out at BMO Field. There’s pressure on each side to win of course, but there’s a little more on the Ticats, who beat the Argos in their first meeting on Labour Day, then dropped their next three meetings, with encounters No. 2 and 3 being one-point losses. Still, the majority of our pick makers think the Ticats can do it, coming off of a convincing win over Montreal last week. A traveling pack of supporters making the trip up the QEW might help pack the stands on Sunday and will try to even out that home field advantage.

The Riders get one last crack at the blue and gold riddle they haven’t been able to solve on Sunday afternoon. This edition of the Bombers might stand as one of the franchise’s all-time great teams, led by a defence that feasts on turnovers and miscues, and is steered on offence by Zach Collaros‘ calm and deliberate style of play. The defending Grey Cup champs come into this game as rested as can be, will have the support of a packed IG Field and have been focused on the next game in front of them since we kicked the season off back in August. The Riders will likely have to be close to perfect to take them down. Going into the game, it feels like a very tall order.