Bombers book trip to the Grey Cup with win over Riders 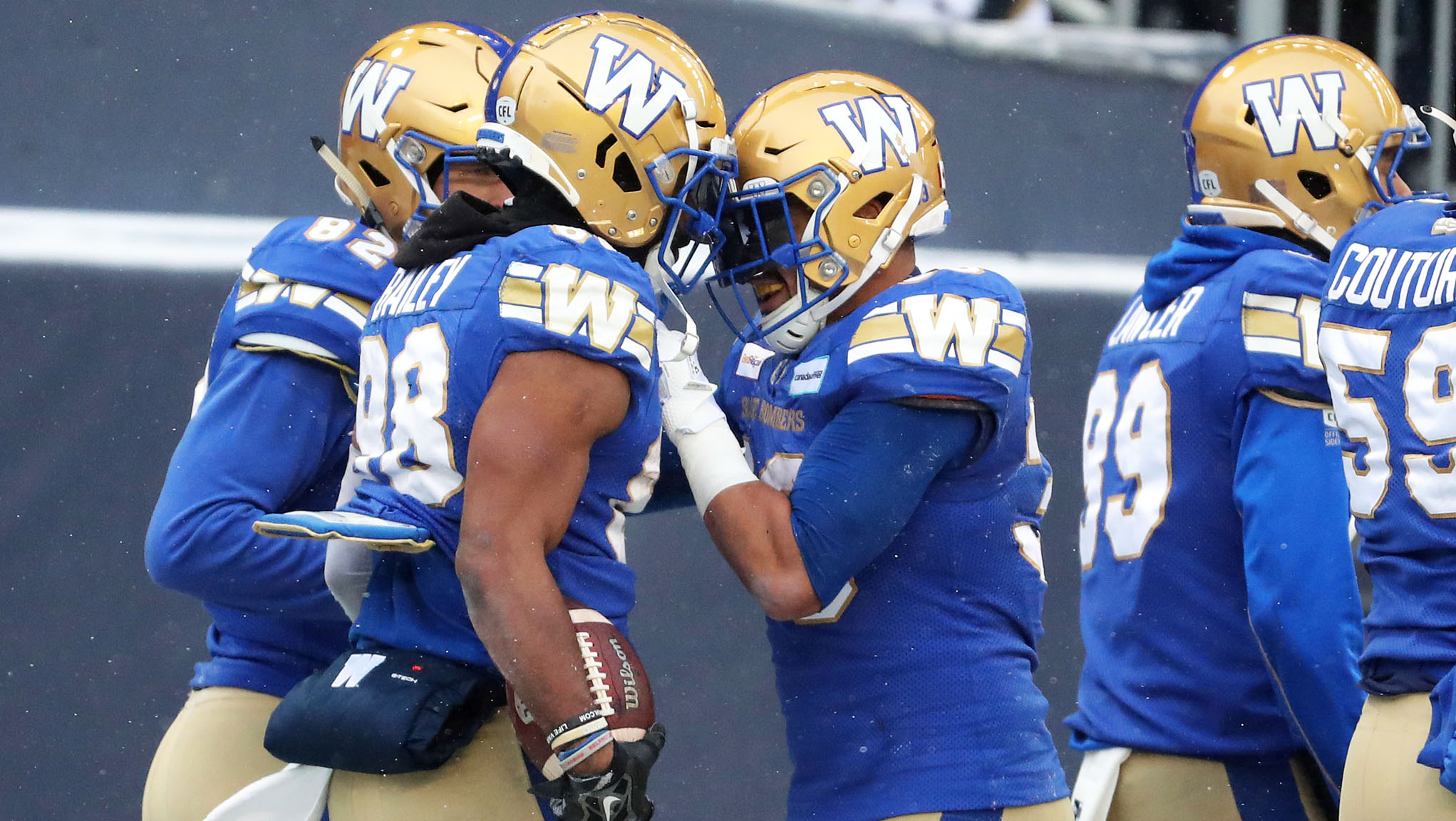 Bombers book trip to the Grey Cup with win over Riders

WINNIPEG — In a game full of momentum swings, turnovers and big plays, the Winnipeg Blue Bombers outlasted the Saskatchewan Roughriders for the 21-17 win to book their trip to the 108th Grey Cup.

Andrew Harris made an impact in his first game back from injury, scoring a touchdown and rushing for 136 yards in the win. Receiver Rasheed Bailey and back up quarterback Sean McGuire also scored majors for the Bombers while defensive back Nick Taylor had the key knockdown on third down late in the fourth quarter to seal the deal for Winnipeg.

The Riders tallied six turnovers in the game, including three interceptions from Ed Gainey, Nick Marshall and Nigel Harris.

Zach Collaros connected on 17 of 21 passes for 229 yards, a touchdown and three interceptions. Cody Fajardo completed 19 of 27 passes for 265 yards and a touchdown.

Now Winnipeg heads to Hamilton for a rematch of the 107th Grey Cup against the Hamilton Tiger-Cats on December 12.

RELATED
» Boxscore: Riders, Bombers by the numbers
» Through the Lens: Riders at Bombers
» Watch: Riders strike first after fumble at their own goal line

Collaros and the Bombers offence opened the contest and moved the chains down the field into scoring position. As the home team was threatening to score, the Roughriders defence had other plans. Collaros looked for Nic Demski in the end zone but the ball popped out of the receiver’s hands and right into Ed Gainey‘s for the game’s first turnover.

After Winnipeg’s defence forced the Riders offence to punt the ball away on the visitor’s first possession of the game, the Bombers had excellent field position, starting on the Riders 21-yard line. Demski refused to be taken down on the first play of the drive, pushing for an 11-yard gain and a first down. But Saskatchewan’s defence had an answer once again as Winnipeg was threatening to score. Collaros completed a pass to Drew Wolitarsky and Loucheiz Purifoy forced the fumble on the goal line.

Elie Bouka scooped it up and returned it 94-yards inside the Bombers 20-yard line. That turnover set up a one-yard touchdown run by William Powell for the first score of the afternoon. With the completed convert, Saskatchewan took an early 7-0 lead.

Winnipeg responded to the Riders score on their next possession with Rasheed Bailey‘s second-effort, 11-yard touchdown. Collaros used Harris, Demski and Bailey on the drive, moving 71 yards in six plays to set up the major. With Sergio Castillo’s completed convert, things were tied 7-7 with three and a half minutes left in the first quarter.

Saskatchewan’s defence continued to force turnovers as Nick Marshall picked off Collaros’ pass intended for Lawler on the first play of the second quarter.

Jamal Morrow started the Riders drive off with a 23-yard catch and run followed by back-to-back Powell runs, eight and two yards, respectively. A holding penalty moved the Riders back 10 yards but defensive pass interference called on Bombers linebacker Kyrie Wilson moved Saskatchewan down to the Bombers 16-yard line.

Saskatchewan couldn’t find the end zone, however, and had to settle for three points as Brett Lauther connected on his 16-yard field goal giving his team a 10-7 lead.

Nigel Harris got in on the turnover action for the Roughriders, picking off Collaros as the Bombers were driving down the field on the blue and gold’s ensuing possession. The interception was the fourth turnover of the first half by the Riders defence, bringing Fajardo and his offence back onto the field, starting on their own 34-yard line with under five minutes left in the quarter. The Riders couldn’t cash in on the turnover, however, and had to punt the ball away.

With under a minute left in the second quarter, Collaros and Winnipeg’s offence were moving the chains hoping for a score before half time. But it was Saskatchewan’s defence that was there once again, tallying their fifth turnover of the half, as Bailey fumbled and Deon Lacey pounced on it for the fumble recovery. They weren’t able to score any points off the turnover and headed to the locker room with a 10-7 lead.

Winnipeg got in on the turnovers to start the second half, notching their first of the game. Jackson Jeffcoat sacked Fajardo to force the fumble and Jake Thomas recovered it to end the Roughriders impressive opening drive of the third quarter.

But another turnover went the Riders way after Marc Liegghio wasn’t able to get the punt kicked off on the ensuing drive and turned the ball over on downs. That was Saskatchewan’s sixth turnover of the game.

Lauther missed a 36-yard field goal attempt and Janarion Grant took it out of the end zone and dashed down the field for a 58-yard return down to the Winnipeg 40-yard line.

The drive started with a 21-yard run from Harris, followed by a three-yard again by Demski. Kenny Lawler hung on for a 26-yard catch where he took a big hit from Gainey and a shovel pass to Demski (12 yards) brought the offence down to the Riders five-yard line. Harris had a two-yard run to set up second and goal before plunging in himself for the three-yard touchdown.

With the completed convert, Winnipeg took a 14-10 lead, their first lead of the game, with just over a minute left in the third quarter.

The lead didn’t last long, though. On the Riders ensuing drive, Fajardo aired it out to Duke Williams, who dashed down the field for the 67-yard touchdown. Lauther’s convert was good and Riders took back the lead (17-14) as the third quarter came to a close.

After moving down to the Riders one-yard line on the Bombers very next possession, Collaros was stopped on a QB sneak on his first attempt. Then Sean McGuire came in on second down to try for the QB sneak and was successful, diving into the end zone to take the lead right back. With the completed convert, Winnipeg went back on top 21-17. The 10-play scoring drive covered 72 yards as momentum swung again in the home team’s favour.

With under three minutes left in the game, Fajardo and the Riders had the ball in their hands, trailing by three points. On third down, Fajardo connected with Williams, who was hurt on the play, for a 31-yard gain. After it was reviewed, it was ruled a catch and kept the Riders drive going.

After a six-yard Lenius catch and a two-yard Fajardo run, the Riders went for it on third down once again. Powell found the edge and got the two yards needed and more (six yard gain) for a new set of downs.

Saskatchewan went for it on third down once again but this time was unsuccessful, as Nick Taylor had the knockdown with one minute left and a four point lead.

That would be it as the Bombers booked their trip to the 108th Grey Cup.