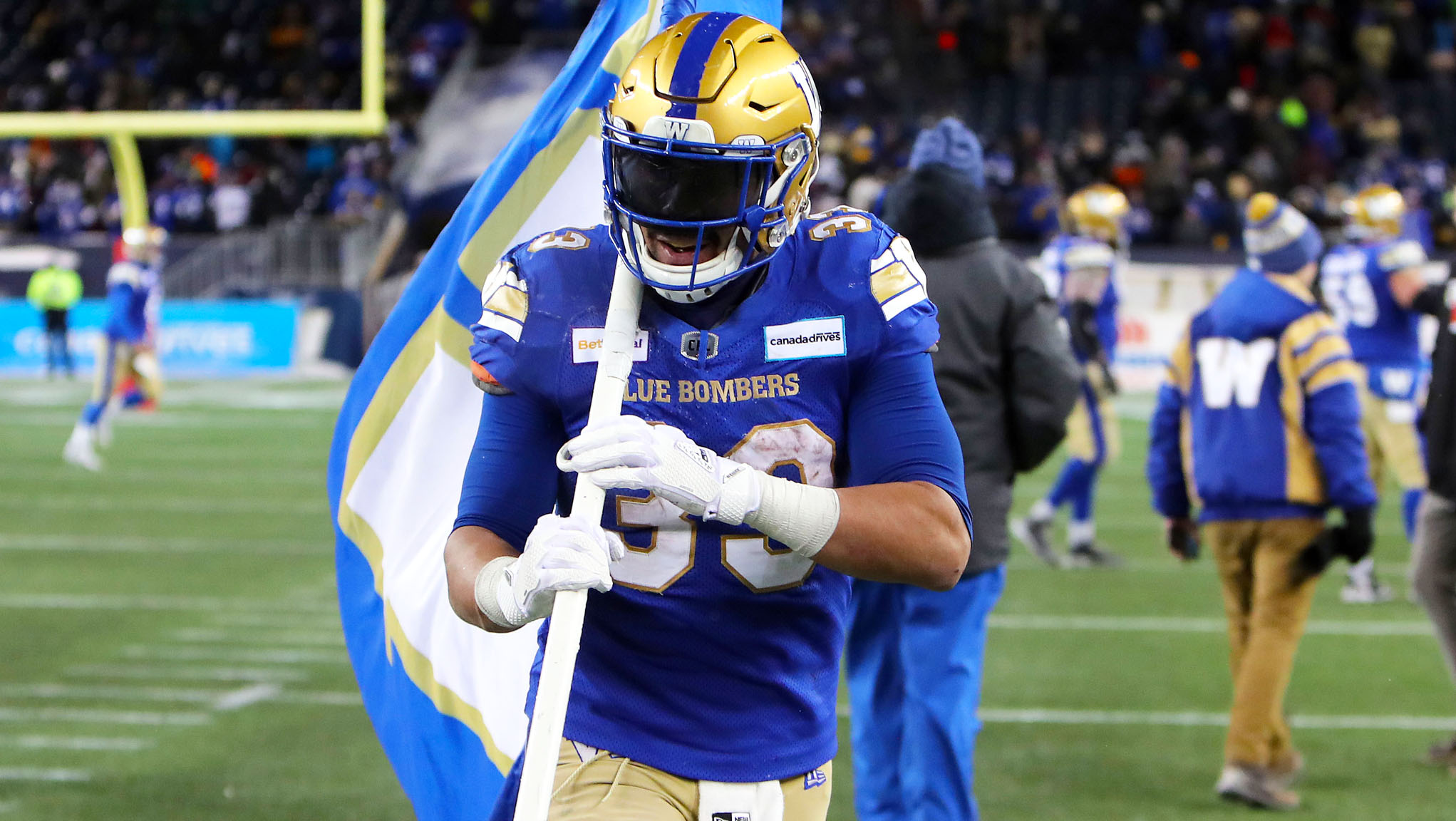 In his first game in almost two months, Andrew Harris looked in MVP form as Winnipeg battled its way to a 21-17 win over Saskatchewan. Had it not been for Harris’s consistency all day, the Bombers may not have been able to overcome six turnovers, including five in the first half.

But that’s what future Hall of Famers do; they take teams on their backs. Harris rushed for 136 yards and a touchdown on 23 carries and added nine more yards through the air. Harris continually gave Winnipeg great first-down yardage and allowed them to move the ball consistently throughout, even when team mistakes were taking points off the board.

While huge catches from Kenny Lawler and Darvin Adams helped the Bombers keep drives alive in the second half, Harris was the constant tone setter, which we shouldn’t be surprised by. No one would have blamed you had you forgot what this Winnipeg offence looks like with Harris as the centerpiece, though. After all, Harris hadn’t suited up since Oct. 15 prior to Sunday.

When Harris was on the field this year, however, he was as good as ever. In Harris’s seven regular-season starts, he racked up 739 total offensive yards and scored four times. And, with six weeks of rest under his belt, Harris prepared like a true professional and ensured he was ready to go come kickoff.

The results were resounding and now Harris has a chance to drive the Bombers to a second straight Grey Cup triumph.

Give Orlondo Steinauer a lot of credit. The head coach of the Hamilton Tiger-Cats made a difficult decision early in his team’s 27-19 win over Toronto in Sunday’s Eastern Final. By replacing quarterback Jeremiah Masoli with Dane Evans in the second quarter, Steinauer gave his team a chance. But it couldn’t have been an easy choice.

“We needed a spark, that’s the bottom line,” Steinauer said postgame. “Those are tough decisions to make and that was just a natural decision to do it there. Jeremiah took it awesome, he understood, he came in and got a key third-and-one at the end of the game.”

I don’t think the difficulty of Steinauer’s decision can be understated. Masoli had been very strong upon returning from injury in Week 9 and was a driving force in Hamilton’s 4-1 finish to the season. In his seven starts to finish the year, Masoli threw nine touchdown passes against just two interceptions and was also solid in Hamilton’s Eastern Semi-Final win over Montreal.

No one would have blamed Steinauer for giving Masoli a little more time to work his way into the game after a rough start. Instead, Steinauer trusted his intuition and his gut in recognizing his guy just didn’t have it on Sunday afternoon. When the switch was made, Masoli was four-of-six for just 22 yards and a lost fumble.

Making the decision more difficult was the fact Evans had thrown just 16 passes since the middle of September. That didn’t show in any way, shape, or form when he got the ball, though. Evans completed all 16 of his passes upon taking over for 249 yards and a touchdown to go along with two rushing majors. It swung the whole ball game.

“It’s just an awesome team,” Steinauer said. “We said in the beginning it was going to take two quarterbacks to get where we wanted to get and today was proof of that.”

I think it’s safe to say Steinauer’s gamble paid off.

When we were getting ready for the return of CFL football this season, the overwhelming belief on the outside was that the two best teams happened to reside in Hamilton and Winnipeg. Well, after very different seasons…here we are: It is indeed the Tiger-Cats and the Bombers in a Grey Cup rematch.

Based largely on all their returning talent, many had Hamilton No. 1 on their preseason power rankings. Both Evans and Masoli were back in the fold, as were their talented group of receivers and the vast majority of their starting defence. How could they not be a force to be reckoned with?

But, as we know, it didn’t go according to plan. The Ticats sustained all kinds of injuries throughout the season, from Masoli to Evans to Brandon Banks and more. At different points they were 0-2, 2-3, and 4-5. But they started showing signs of a team peaking at the right time down the stretch and here they are with an opportunity to avenge their 2019 loss.

Winnipeg’s path was very different. They were the CFL’s best team wire-to-wire and picked up right where they left off as defending champions. Zach Collaros proved his return to prominence was more than just a four-game run late in a season. And from Stanley Bryant to Willie Jefferson and more, the Bombers brought almost everyone back for another run.

And yet despite their dominance, it wasn’t all smooth sailing. Because they were so far out in front from the rest of the pack, the Blue Bombers clinched their top seed with a month remaining. They had to strike the balance of staying fresh while also avoiding injuries and, let’s be honest, they looked rusty to start Sunday’s game against Saskatchewan.

In the end, though, we got our dream rematch in the 108th Grey Cup. Let the countdown begin.