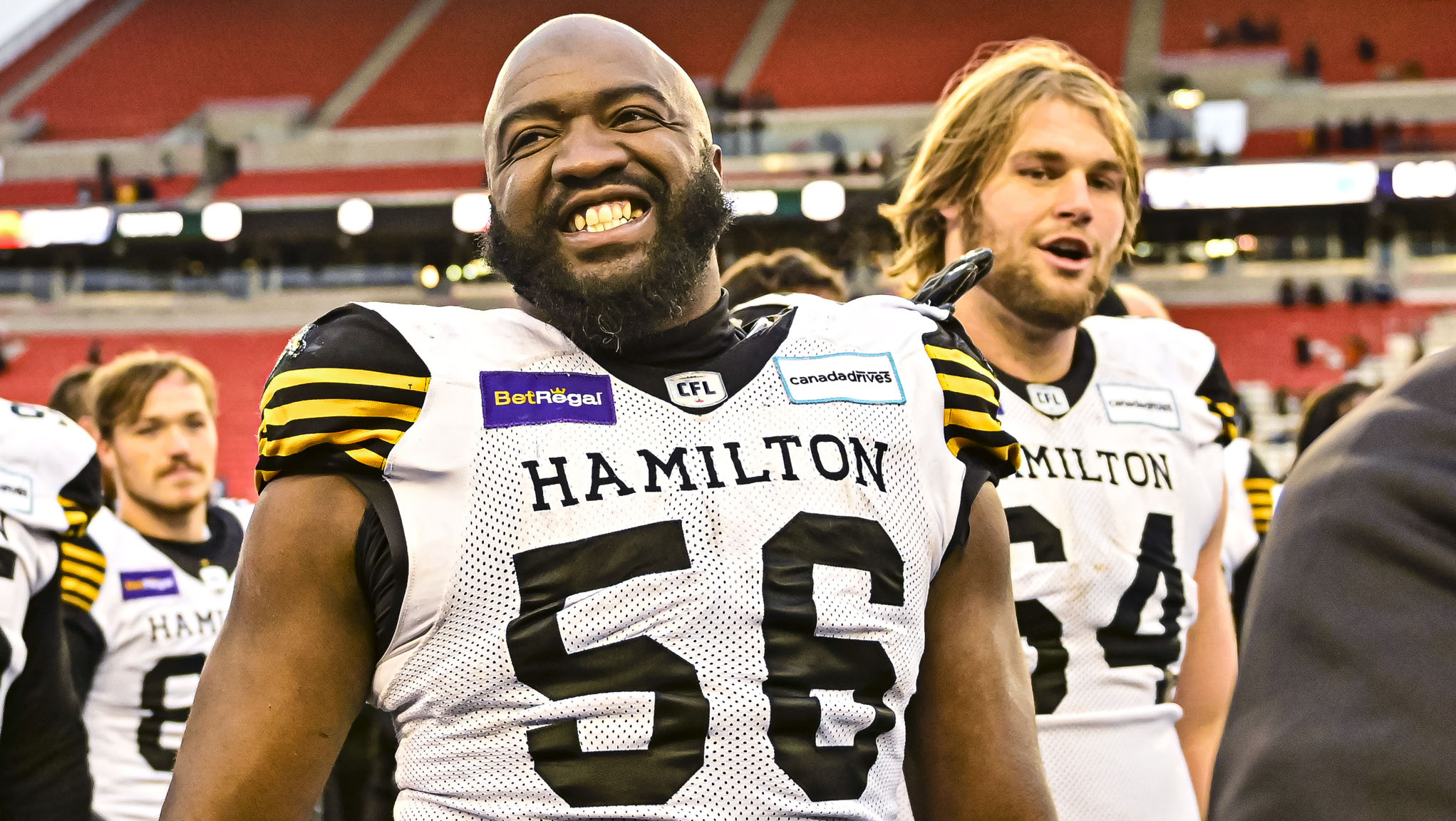 While you might not believe it, we have reached the 108th Grey Cup.

In an unparalleled sprint the likes of which we, hopefully will never experience again, the two teams that lingered in your memory the most through a canceled 2020 CFL season have done the work necessary to reintroduce themselves on the game’s grandest stage.

Hamilton and Winnipeg are a perplexing set of squads to analyze, especially with visions of 2019 always somewhere close behind. The Bombers are more similar than different to their 2019 version, while Hamilton has many of the same pieces, but feels completely different.

While this early analysis is lopsided to the West Division Champions, each and every positional group was a tough decision which I believe will make for tremendous theatre Sunday at Tim Hortons Field. 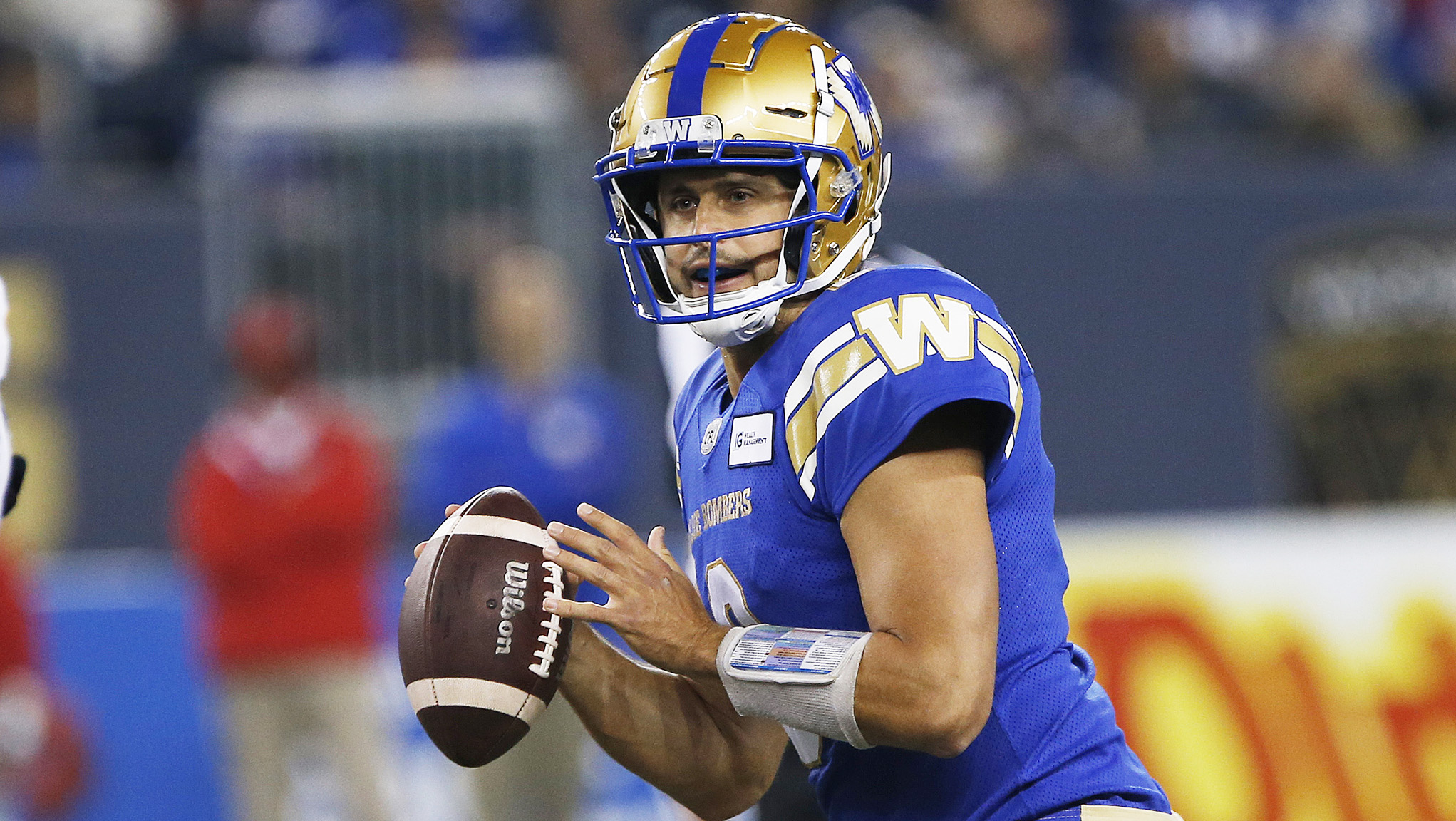 While the element of surprise of not having 2021 film on Dane Evans could bump the Ticats chances of offensive success, Winnipeg knows exactly what they did to rattle the presumed Ticats starter this week from the dominant 2019 Grey Cup victory over Evans’ Cats club.

What this really comes down to is Zach Collaros’ comfort in the Bombers offensive system, and system is the key word in everything Winnipeg does. Their path to success is formulaic, relying on successful first down runs and daring second down grabs. At the controls of it all, Collaros’ is the ring leader who knows exactly what buttons to push and when. 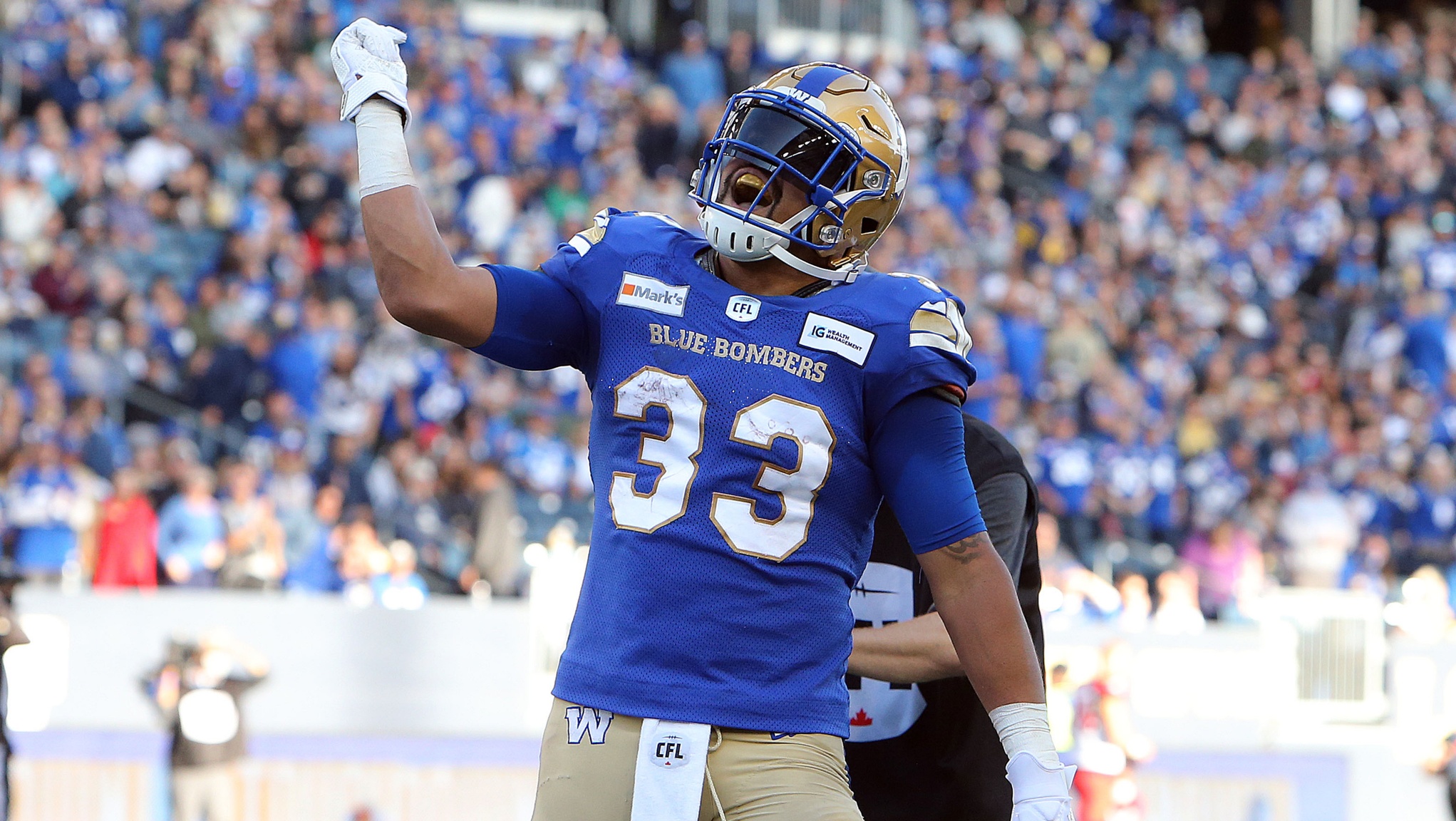 Don Jackson has shown a burst and decisiveness that really made the Tiger-Cats offence come to life over the past few weeks. Similar to the quarterback analysis above, Hamilton has every opportunity to steal the show Sunday at any of these positional groups. We’ve seen it before (see 2016 and 2017 Stampeders Grey Cup losses) and we’ll see it again, but can Jackson do enough and can the Ticats play from ahead in a way that sees Jackson get enough touches to be a difference maker?

That’s a big ask, especially against what appears to be a healthy and maximally motivated Andrew Harris. I read the injury reports all last week like all of you, but I didn’t believe for a second he wouldn’t play just as I believe he’s drooling while watching back 2019 Grey Cup film of his offensive line caving in Ticats defensive lineman as he ran full steam into the secondary untouched. 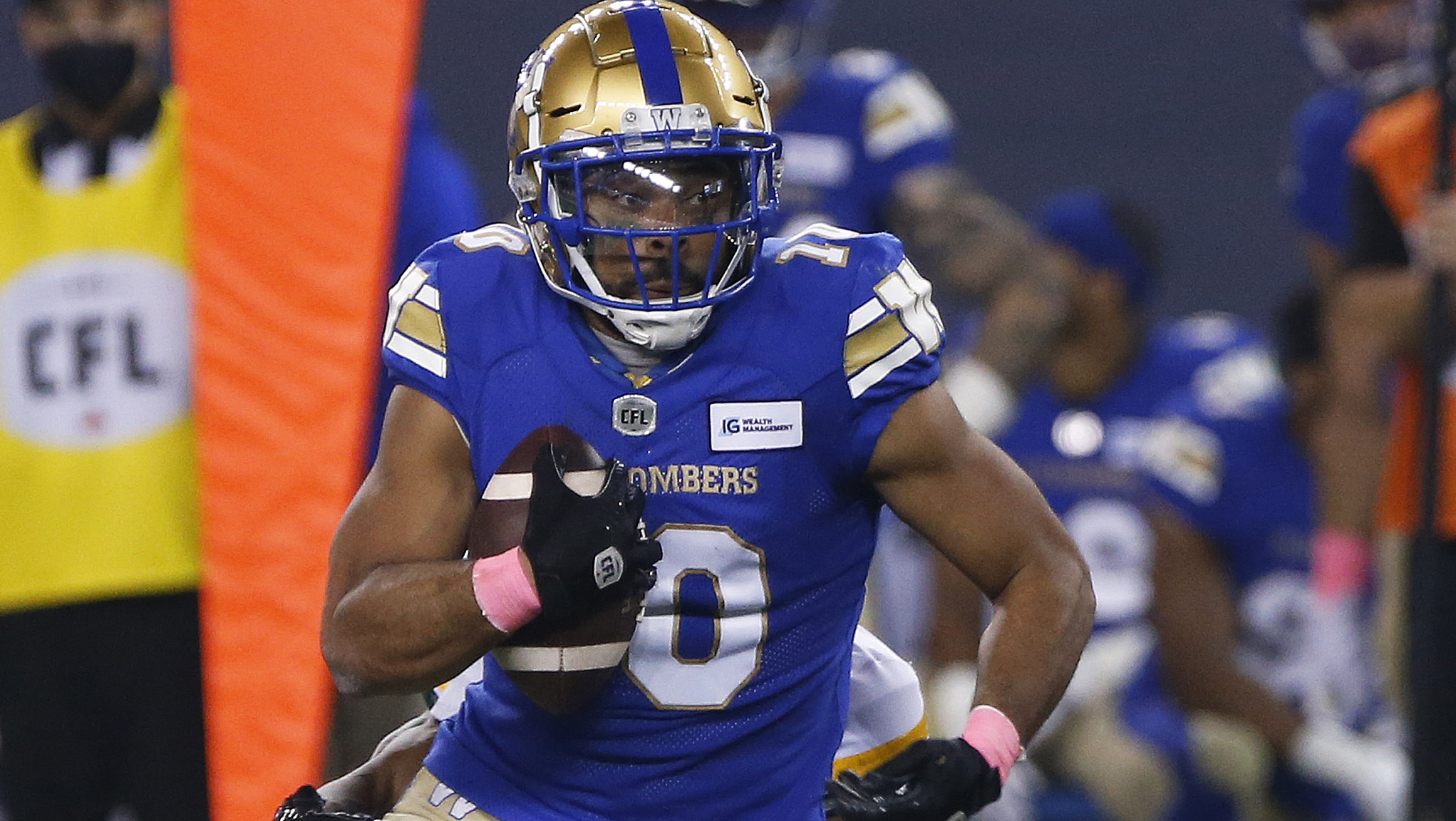 This was one of the closest calls for me, because I believe Tim White is unreasonably underrated and Brandon Banks has looked like his legs are – finally – underneath him for the first time all year in this two game playoff run. With Jaelon Acklin contributing in a variety of ways Hamilton could spread it out and let Evans try to pick the Bombers apart with a high volume of throws, but I believe the Bombers placation passing game and second down aerial assault is too much with Kenny Lawler and emerging star Rasheed Bailey running free through coverage.

Add in Nic Demski and Andrew Harris out of the backfield (another 2019 Grey Cup memory) and you have another advantage for Winnipeg by the slightest of margins. 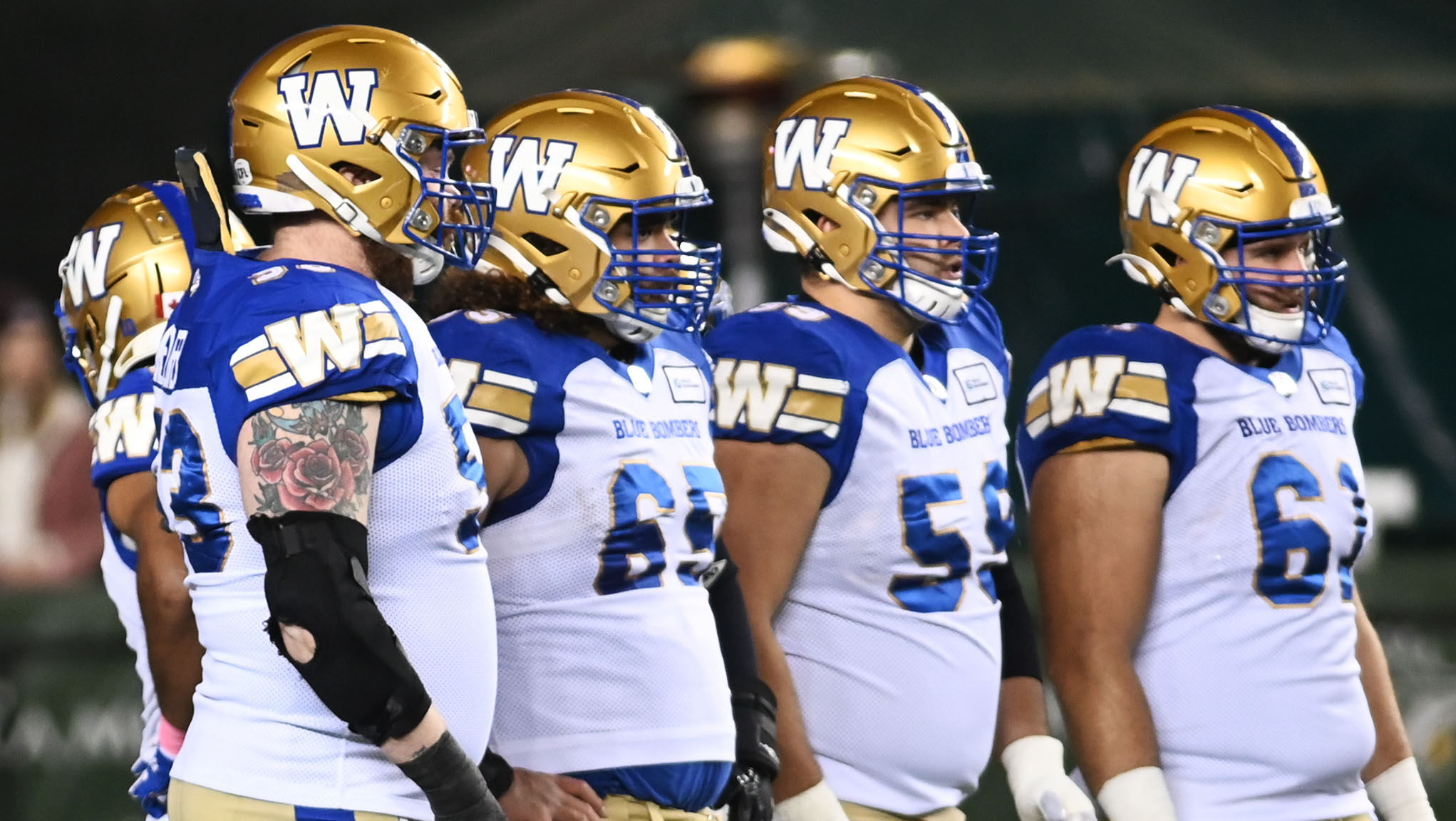 Stanley Bryant paired next to Drew Desjarlais on the left side is a cheat code. The amount of movement consistently created by those two in the run game is special while Michael Couture, Patrick Neufeld and Jermarcus Hardrick more than hold their own.

In Hamilton, Chris Van Zeyl is the physical and emotional leader of a Ticats protection that has been forced to ride the wave of injuries, inconsistency and down right ugly play through various points in the season. Brandon Revenberg is still a bulldozer but there are some questions at left tackle and Van Zeyl will have to improve his own performance from the 2019 Grey Cup against Jefferson to give Evans any chance to make plays down the field. 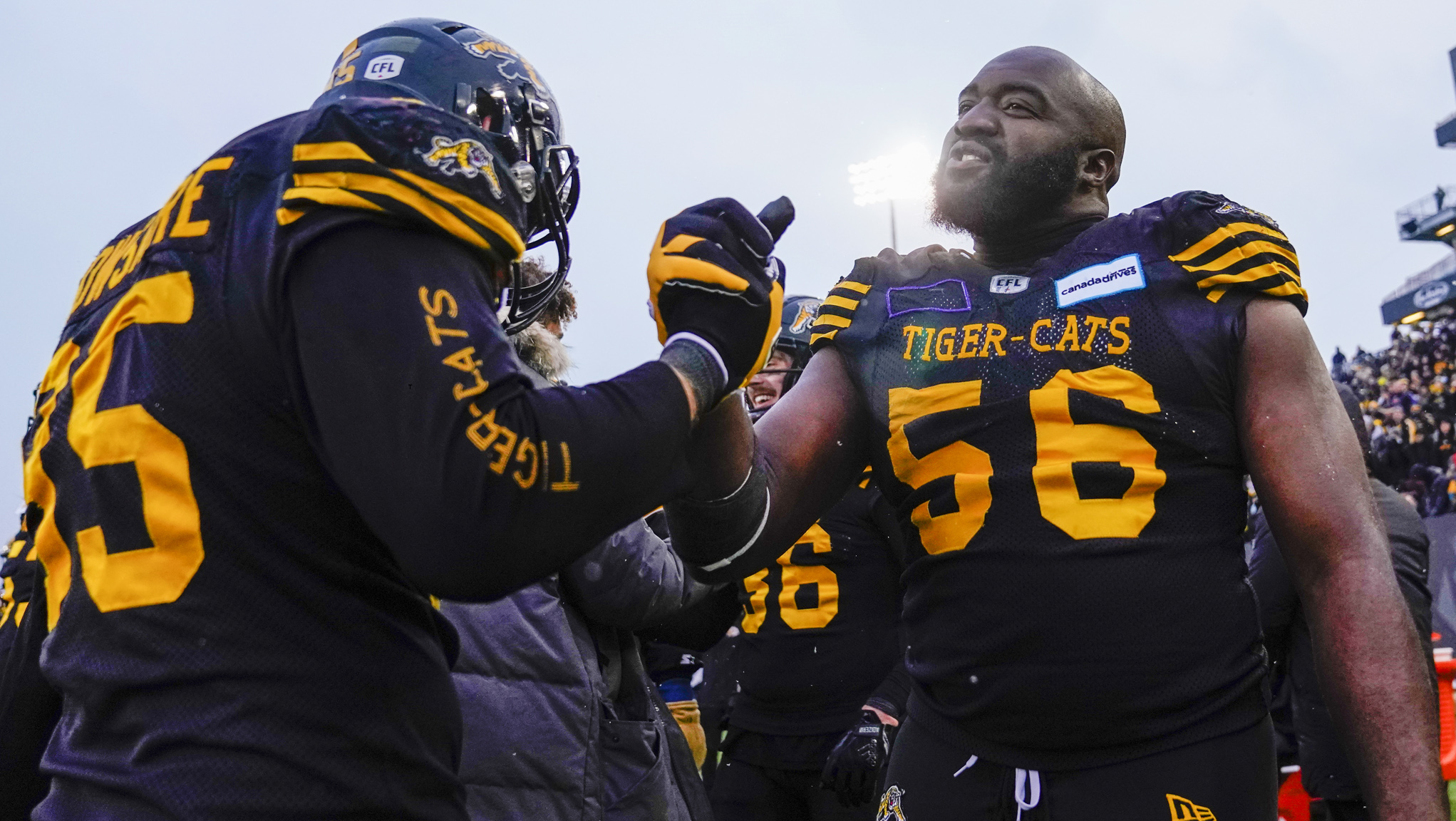 If Willie Jefferson and Jackson Jeffcoat play this Sunday the way they did in the 2019 Grey Cup this is not even close, but Ja’Gared Davis’ playoff performances each of the last two weeks have been special. He’s arguably been the best player on the field for both teams, not just defensive lineman or defender and the support he receives from Ted Laurent and Dylan Wynn creating internal pressure while Simoni Lawrence blitzes off his hip makes for a dynamic pass rush in Hamilton that is ever bit likely to change the game as the Bombers.

Both teams do it a different way, and both will impact this game with sacks, knockdowns and maybe a turnover or two created that could swing the outcome. 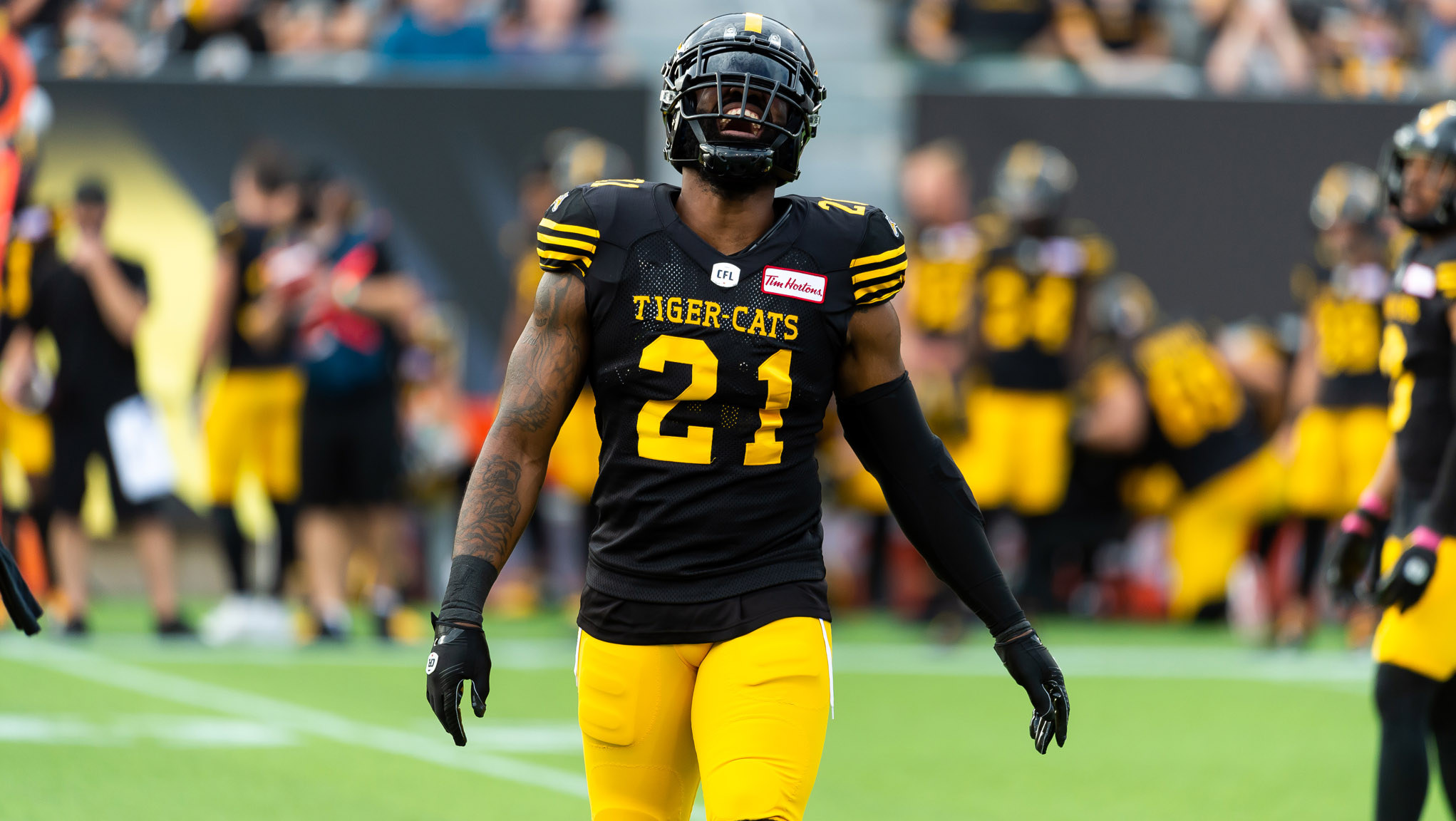 Adam Bighill is the best linebacker in the CFL, full stop.

Next to him Alden Darby has supplied exactly what Winnipeg needed via trade and Kyrie Wilson is a solid player, but this is about the sum of the parts.

Simoni Lawrence partnering with former Bomber Jovan Santos-Knox has been less productive than the Lawrence-Dean pairing, but more effective than the Lawrence-Tuggle tandem from a few seasons ago. Add in Kameron Kelly, whose length and physicality jumps off the screen as well as his positional flexibility, and the lean here is black and gold. 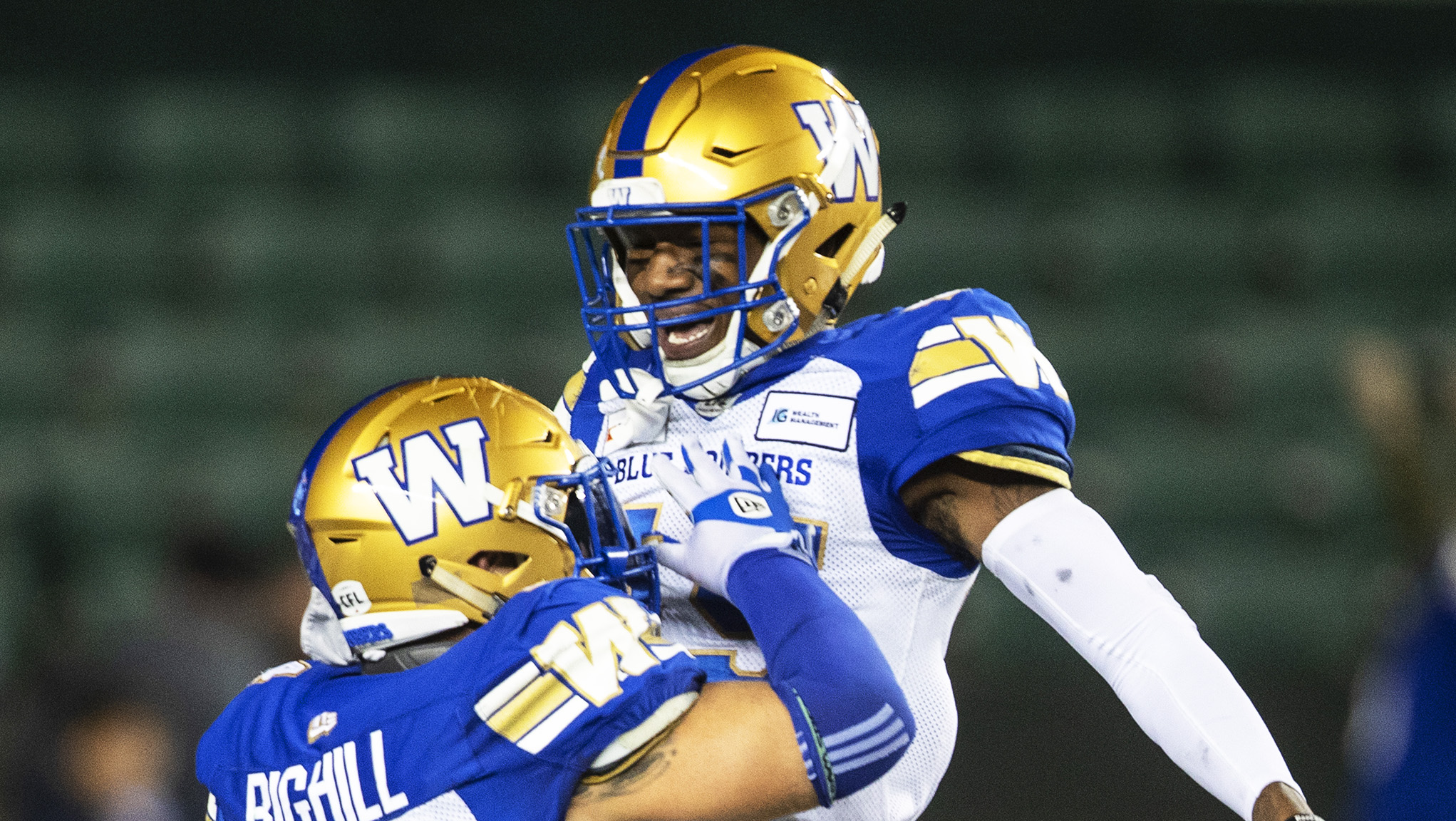 Most of this comes from not knowing what Hamilton’s secondary is going to look like Sunday.

When boundary corner Desmond Lawrence was injured in the Eastern Final win over Toronto, the Ticats spun the positional wheel and landed on Jumal Rolle from field to boundary corner, Ciante Evans bouncing to field corner, Tunde Adeleke down from free safety to field halfback and rookie Stavros Katsantonis into the game at free safety. Got all that? Good.

While the shift worked and the play of Adeleke specifically has been a difference maker, rookie DeAundre Alford alongside Nick Taylor in the boundary is one of the top duos in the CFL right now with Brandon Alexander always ready to come down hill in a hurry on the run game. 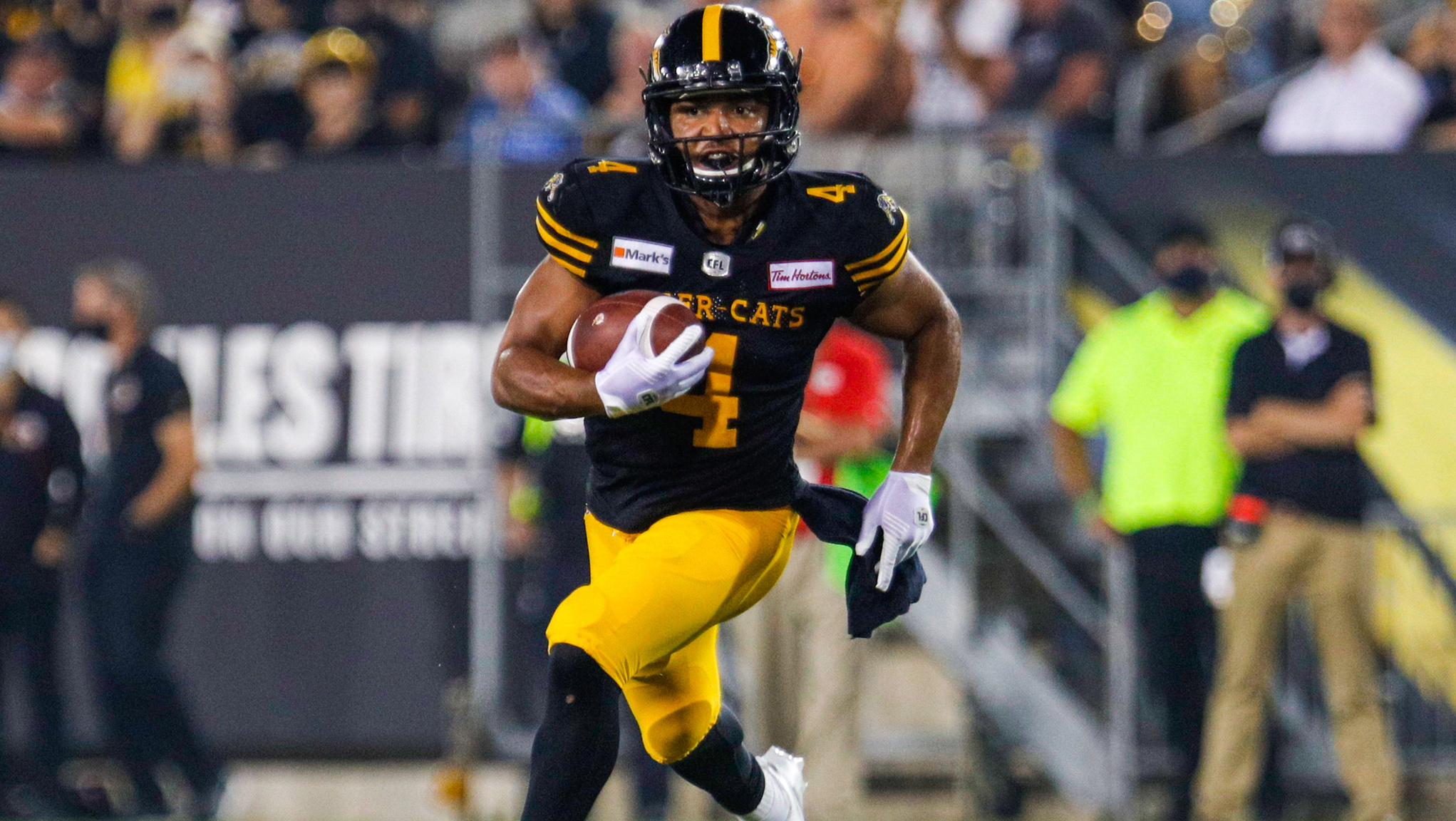 Janarion Grant has been a real positive for Mike O’Shea’s squad, but momentum is real in the return game and Hamilton has it right now after Papi White’s TSN Turning Point propelled the Ticats back into the Eastern Final.

Factor in the ever-present threat of Brandon Banks getting a one off missed field goal return and the advantage here is Ticats, unless Grant takes one to the house Sunday as he is want to do occasionally, at which point you can disregard all of this. 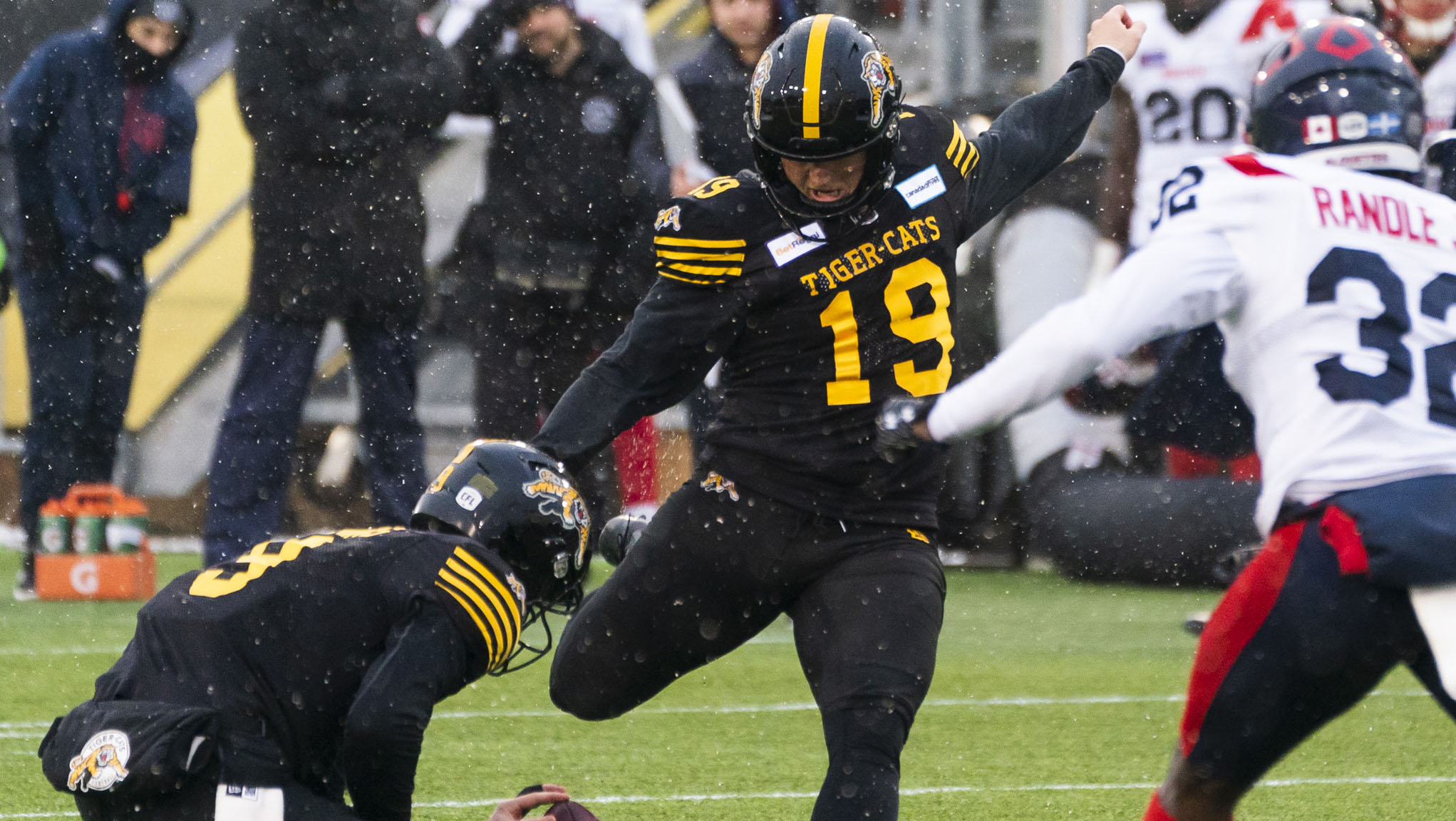 Who really knows.. Fitting that in a year with so many kicking questions and subsequent transactions, the Grey Cup would feel like a coin flip. Sergio Castillo is the best of the bunch, but hasn’t looked rock solid while both Joel Whitford and Michael Domagala struggled in the Eastern Final.

If the game comes down to special teams, specifically kicks, your guess is as good as mine. 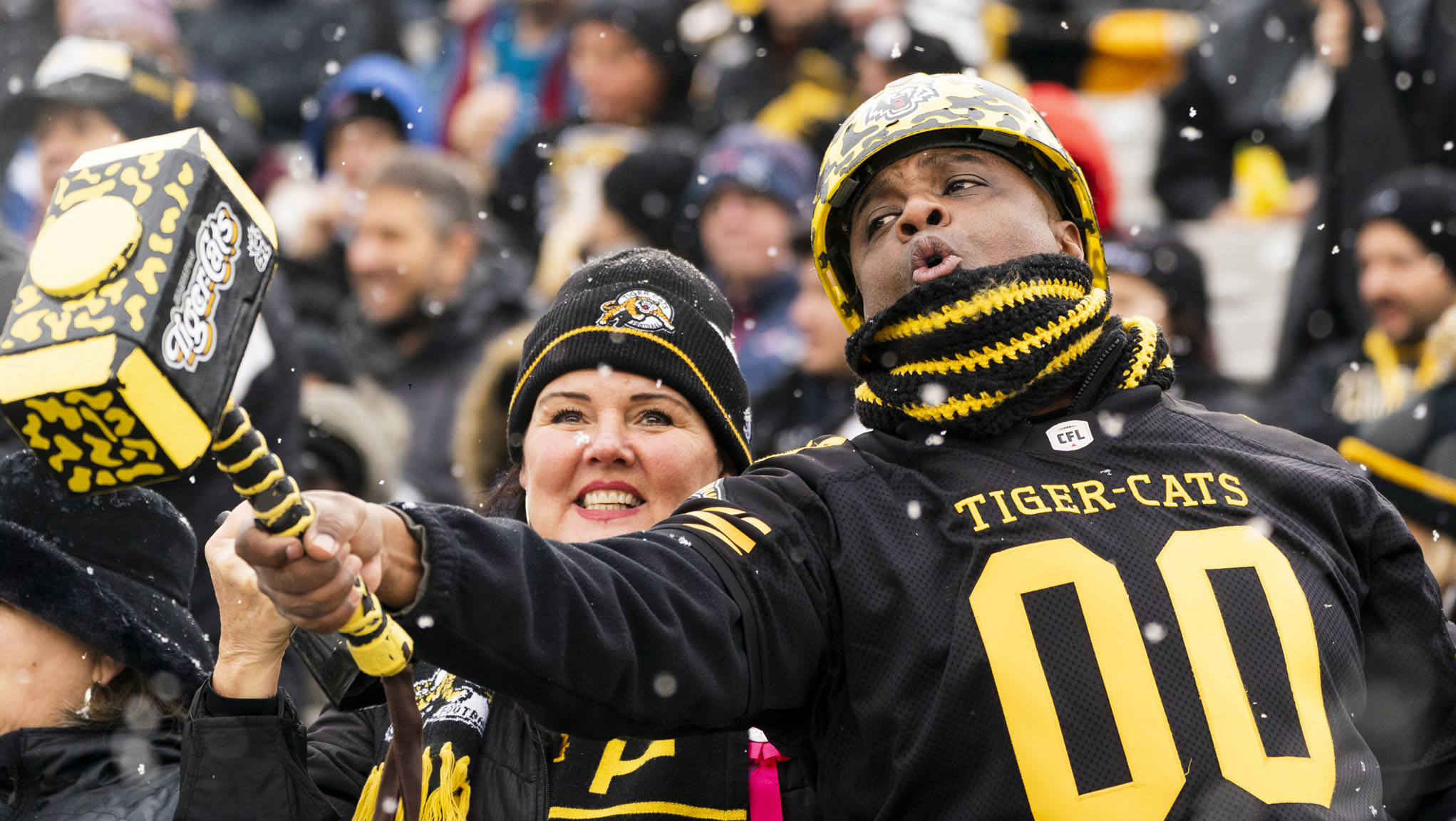 While they can’t make a tackle or catch a touchdown pass, you know the fans have a real impact on the flow and mood of games. While I know Bombers fans travel passionately and thanks to their team success have probably been holding their flight tickets patiently for months, the reality is Hamilton is about to show up and be heard in a way that should reverberate from Ancaster to Stoney Creek and beyond. Will it be enough to overcome the Bombers excellence of 2021?

The biggest question of all, fitting for the biggest game in two years, a rematch of the last titanic tilt.