History surrounded Brandon Banks at the Canadian Warplane Heritage Museum but the Hamilton Tiger-Cats receiver with the fast feet and sure hands was more focused on the future.

Banks will appear in his fourth CFL championship game on Sunday when the Tiger-Cats host the Winnipeg Blue Bombers in the 108th Grey Cup at Tim Hortons Field, but he has yet to sip champagne from the coveted mug.

Banks and linebacker Simoni Lawrence played on the 2013 Tiger-Cat team that was beaten up 45-23 by the Saskatchewan Roughriders and the 2014 club that lost 20-16 to the Calgary Stampeders.

Through the Lens: Hamilton Tiger-Cats ready to attack GC Week

As fast as he is on the field, Banks knows that he can’t outrun time. He turns 34 later this month. After missing four games this year with a rib injury, Banks had 44 catches for 474 yards and two touchdowns. It’s the first time since 2016 he hasn’t had over 1,000 yards receiving in a season.

“I’m older,” said the CFL’s Most Outstanding Player in 2019. “I’m definitely trying to take advantage of this week, each day, each hour, to get prepared for this opportunity.

“The window is getting smaller for me to take advantage of this opportunity. What better way to write a story?”

Ever since the season started, the Tiger-Cats’ goal was to play for the Grey Cup in their own house.

“It sure feels good,” said head coach Orlondo Steinauer. “The thought of having other people rummaging on our floor or in our locker room was a little bit uneasy.”

Even with all the hype, hoopla and expectations, nothing changes when it comes to preparing for the game.

“It does feel like another week…because nothing has really changed,” said Steinauer. “We’re eating in a little different spot, meeting rooms are a little bit different but other than that it’s the same guys in the same building with the same lockers.”

“Each football team is different,” he said.

“They have their own leaders, their own identity. You’ve always got to take the experience from having been there before, but at the same time understand it is a different team and you have to understand that team and do what you can to give yourself the best opportunity to win the game.” 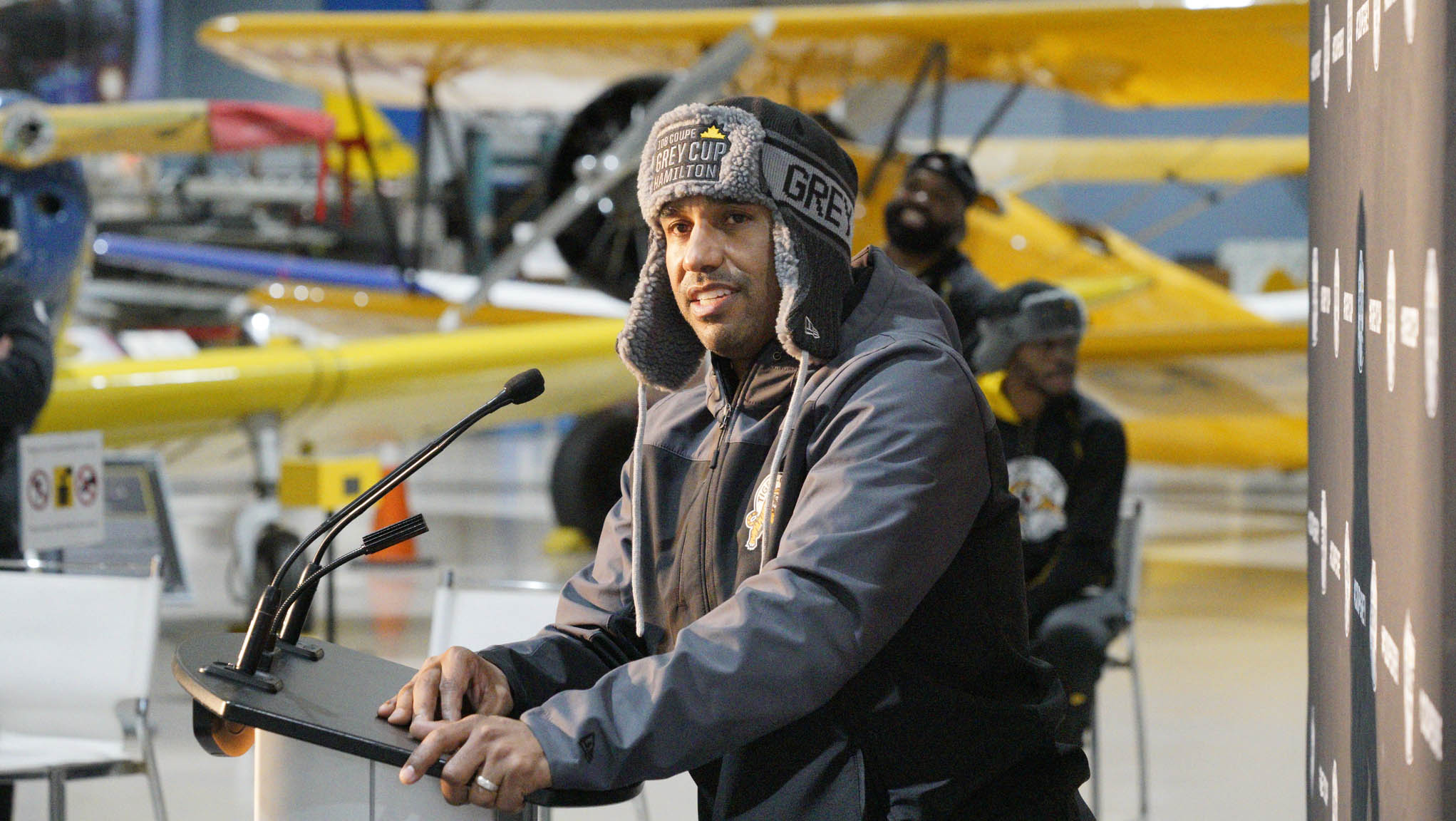 Hamilton Tiger-Cats head coach Orlondo Steinauer steered his team to an 8-6 record and now gets the comforts of home, as his team plays for a Grey Cup at Tim Hortons Field (J.P. Moczulski/CFL.ca)

The Tiger-Cats finished second in the East with an 8-6 record. They defeated the Montreal Alouettes 23-12 in the Eastern Division Semi-Final then advanced to the Grey Cup with a 27-19 win over the Toronto Argonauts.

In the two playoff games Banks had eight catches for 121 yards and a touchdown.

Over the years, Banks’ role with the team as evolved. As a veteran, he has advice to offer to players like Tim White and Steven Dunbar Jr., two CFL rookies playing in their first Grey Cup.

“Enjoy the moment, just don’t make the moment bigger than what it really is,” Banks said. “At the end of the day it’s another football game. Everyone knows what’s at stake.”

Hamilton’s only game against Winnipeg was the season-opener, which they lost 19-6.

The Blue Bombers cruised through the CFL with a league-best 11-3 record before beating the Saskatchewan Roughriders 21-17 in the Western Semi-Final.

Winnipeg is favoured to repeat as Grey Cup champions, but Lawrence refuses to think of the Tiger-Cats as underdogs.

“We’re all professional athletes and I don’t think anybody goes into a game thinking they’re underdogs,” said the Eastern Division All-Star.

“We’re both in this game for a reason. It’s a competitive game. Anybody that goes in thinking they’re playing against the underdog, that’s a quick way to get tricked out of your spot.”

Lawrence is also thrilled for the chance to win a championship in front of the Tiger-Cats’ rabid fans, especially after the 2020 CFL season was cancelled due to COVID-19.

“This is great for the city, especially all the small businesses and the restaurants” he said. “I’m pretty sure everybody got hit pretty hard during COVID.

“From a financial standing, just to have everybody in the CFL come and spend money in Hamilton, that’s a blessing.”