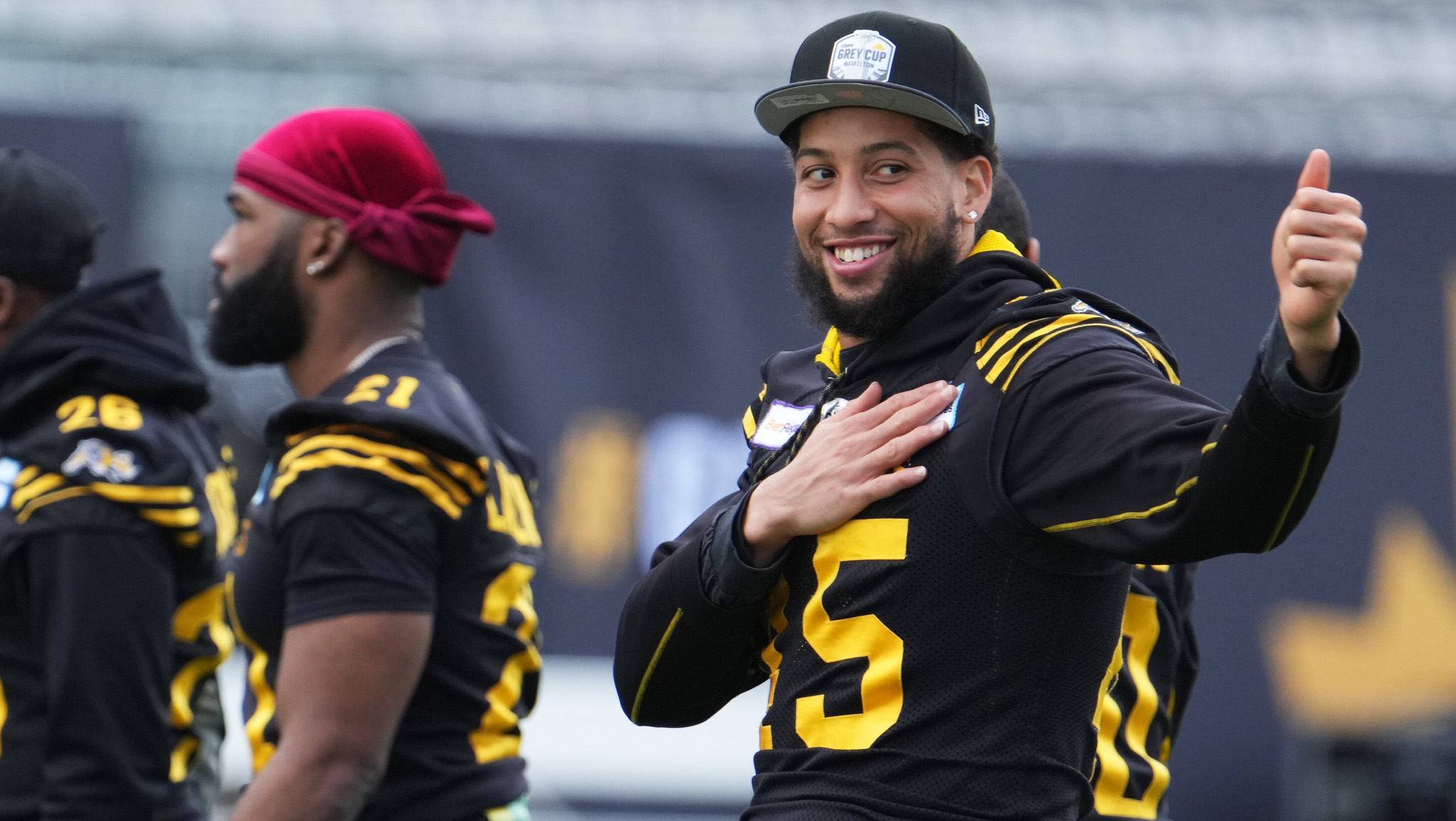 HAMILTON — Nineteen weeks and 63 games plus playoffs later, we’re at the end of the Canadian Football road.

The Winnipeg Blue Bombers are in Hamilton, looking to defend their 2019 championship against the team that they topped to get it, the hometown Hamilton Tiger-Cats. It’s the perfect ending to what will be remembered as one of the most unique and uniquely challenging seasons this league has ever held.

The Bombers, having built up an 11-3 record through the season, will be the favourites over the 8-6 Ticats, but we can’t discount home field advantage in a Grey Cup. The last three teams to play for the Grey Cup in front of their hometown fans (Saskatchewan 2013, Toronto 2012, BC 2011) all won their games. If you want another historical fact on the home team’s side, the last time the Ticats hosted a Grey Cup game in December was in 1972. They came away from that game with a win, downing Saskatchewan 13-10 on Dec. 3.

On a much less important note, this final game of the season will give us a clear winner in the race between the CFL.ca writers. Jamie Nye and Pat Steinberg are knotted at 41-26 on the season, having salvaged their records from a very topsy-turvy, unpredictable start. With their allegiances split on this final pick, one of them will finish with 42 wins to claim first place.

If for possibly dubious reasons, you’ve sought guidance from the following chart to make your picks, we have some (further) bad news for you: There isn’t much help to be had here, as the writers are firmly divided on which team they think will hoist the Grey Cup on Sunday night.

RELATED
» Head to Head: Who has the edge in the Grey Cup?
» CFL Pick ‘Em: Make your Grey Cup picks!
» Weekly Predictor: Taking the hometown Tiger-Cats 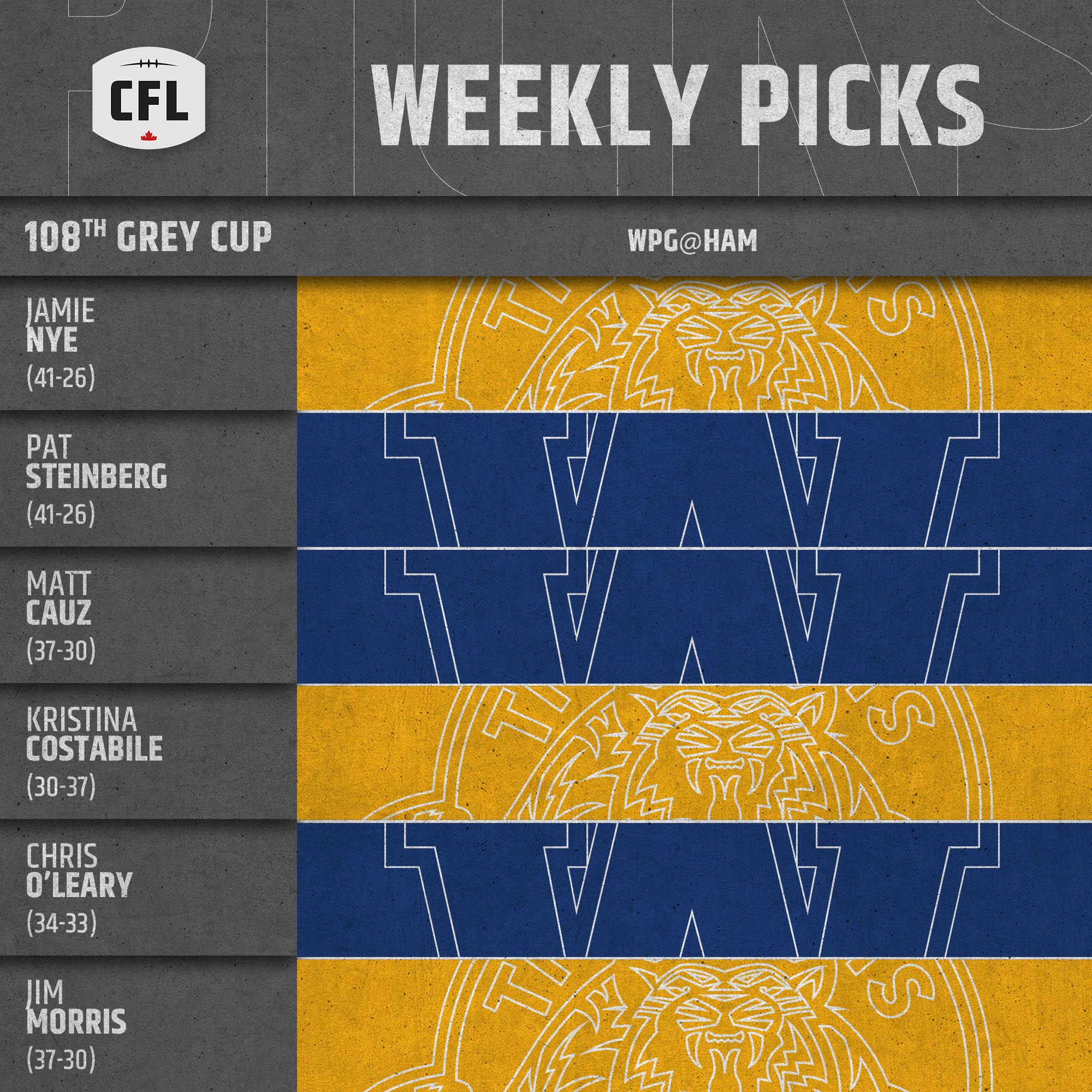 Dane Evans spent the bulk of the 2021 season on the Ticats’ sideline and may not have thought the scenario he faces this week would be possible. Thanks to a slow Ticats start in the first quarter of the Eastern Final, Evans was thrown into the fire and burst through the other side, leading his team to its second consecutive Grey Cup appearance. The downside to this incredible story is that he and his teammates run smack into the Winnipeg Blue Bombers as their final obstacle of the season.

The Bombers are led by an elite defence, one that could go down as an all-time great one. They’re steered on offence by MOP candidate Zach Collaros, who has built on the success he found with his new team in late 2019 and reinvigorated his career. Despite a turnover-heavy scare in the Eastern Final against Saskatchewan, the Bombers have been in a class of their own this season and many will look at Sunday’s game as theirs to lose.

Will they lose it? We can’t say definitively. Will they win it? Will Hamilton? The panel of pick makers, with their own appropriate ending for a unique season, leaves this one up in the air as its own cliffhanger.