Steinberg: Ted Laurent on Hamilton’s mind ahead of GC108 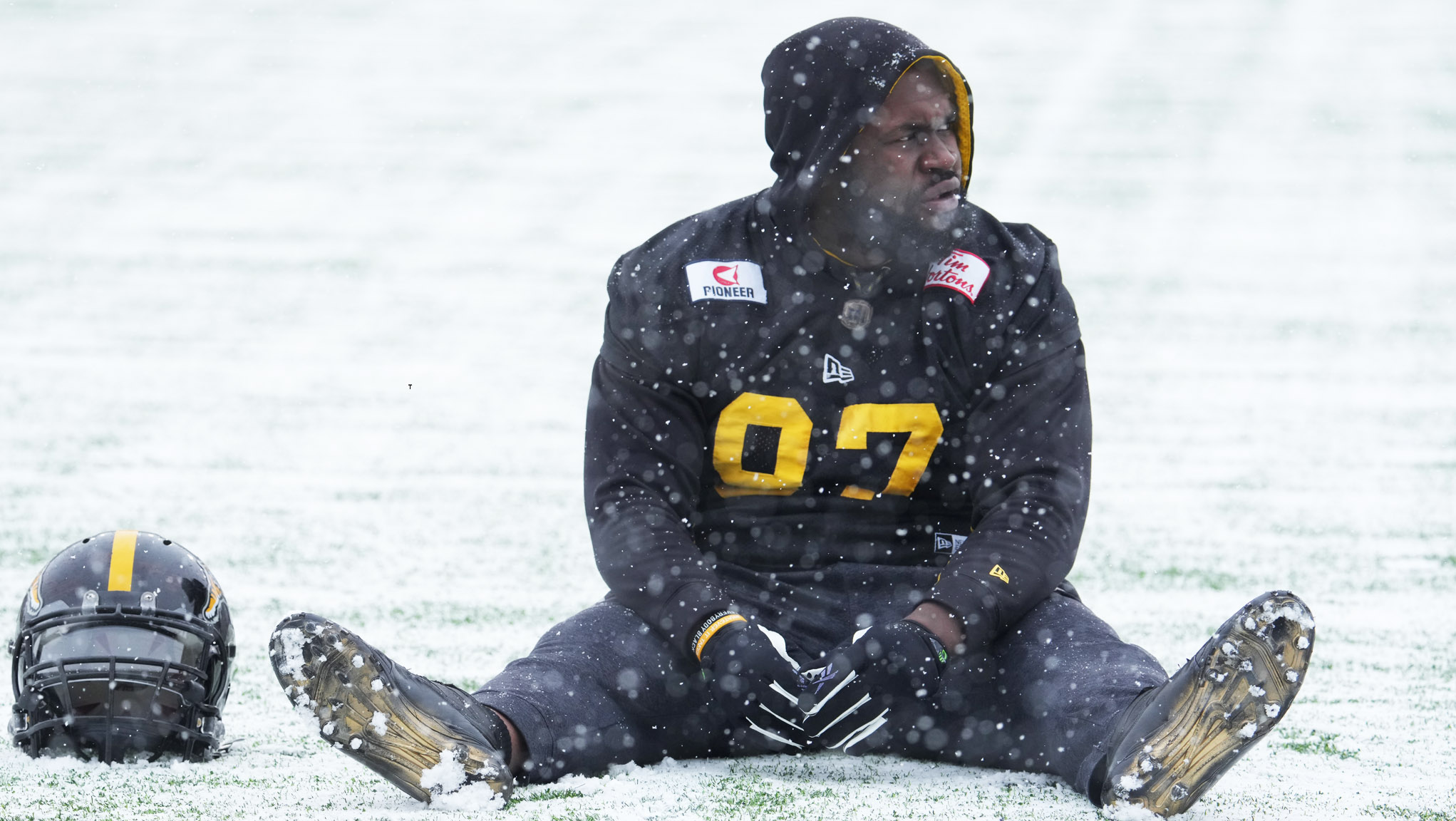 Steinberg: Ted Laurent on Hamilton’s mind ahead of GC108

The Hamilton Tiger-Cats confirmed before Saturday’s walkthrough the four-time East Division All-Star would be unavailable for Sunday’s 108th Grey Cup showdown with Winnipeg. Absent at practice Thursday and Friday, Laurent underwent a procedure for appendicitis, which will keep him sidelined.

“Having Ted not go is a big blow,” admitted head coach Orlondo Steinauer. “There’s more to it than just his production on the field, obviously that’s a ratio challenge. I feel for Teddy the person, he’s a big part of what helped us get here.”

It’s a big loss for the Ticats on the field. Laurent, who will be replaced by Lee Autry at nose tackle, has been disruptive and extremely effective in Hamilton’s two playoff wins thus far. He’s helped free up Ja’Gared Davis and Julian Howsare off the edge in pass rush situations, and Laurent has been a brick wall in run defence.

In two playoff wins over Montreal and Toronto, the Tiger-Cats have averaged just 47 rushing yards against, and Laurent has been a huge reason why. With Andrew Harris in Winnipeg’s backfield, and coming off his performance in the Western Final, Hamilton’s defensive task has become a little more difficult.

Laurent’s absence will be felt just as much off the field. A member of the Tiger-Cats since 2014, the 33-year-old is an established leader in Hamilton’s locker room, which is why his appearance in Saturday’s meeting after walkthrough was a huge boost.

“Ted was in our meeting and that was an emotional lift for our football team that he was sitting there,” said Steinauer. “He couldn’t laugh like he regularly could, but it was important for him to be there and it was just nice to have him there.”

So, while replacing Laurent is an impossible task, you know the Ticats will have him on their mind when they take the field Sunday.

“It was nice to see him healthy and good after getting a surgery like that,” said defensive back Tunde Adeleke. “Playing or not, like I don’t think that’s a big thing for us. It’s bigger than football, that’s someone we care about as a team. Having him in the meeting room was a huge morale lift for the team.”

We all know the 108th Grey Cup is a rematch of the 2019 game played in Calgary. That showdown saw the Blue Bombers take a convincing win, which has led to inevitable “payback” and “redemption” storylines. The only issue is Hamilton isn’t looking at Sunday’s game quite the same way.

“You could ask everybody to a person in there…that hasn’t come up in motivation for our athletes to go out and perform,” Steinauer said. “A lot of these players weren’t here, they didn’t have anything to do with it. For the ones that were, I’m not going to speak for them, but you can growl, you can roar, you can do media, but the game is to be played and not talked about.

“It’s about execution and the team that executes the best is going to have the best opportunity to win. There really is not a revenge factor or a get even, this is about 60 minutes of football or more and trying to get a win.”

That sentiment has been echoed by Tiger-Cats players all week long. 2019 is in the past and this year’s challenge against Winnipeg is a brand new challenge. Quarterback Dane Evans, who struggled against the Bombers two years ago, is in that same camp.

“Honestly not really,” Evans admitted when asked if he has redemption on his mind. “As a quarterback I’ve got so much other stuff to worry about on game day to think about, to keep my mind on. I don’t really have time to let that kind of creep in, that’s for you all to do. I’m just thankful to get another opportunity to represent this team, represent my family, and go to war with my brothers and I’m ready for it.”

Speaking of Evans, there’s no usage plan for him. Steinauer confirmed Evans as his Grey Cup starter early in the week after he replaced Jeremiah Masoli in Hamilton’s Eastern Final win over Toronto. If the Ticats get the result they’re looking for, it’ll likely mean Evans goes the whole way.

“The beautiful thing for us is that Dane can just play,” Steinauer said. “I don’t think every football team in this league, you know they kind of hold their breath if their starter gets hurt. We’re not in that situation. If everything goes according to plan, you would assume that Dane wouldn’t come out. There is no leash. It’s the same as in Toronto; there was no plan for Jeremiah to come out.”

Laurent isn’t the only significant player out of Hamilton’s lineup on Sunday. The Tiger-Cats will also be without standout boundary corner Desmond Lawrence after sustaining a shoulder injury against the Argos last weekend. With Laurent’s absence already affecting Hamilton’s ratio, they’re making changes in the secondary, too.

Luckily, this is nothing new for the Ticats. When Lawrence went down in Toronto, Jumal Rolle moved from field corner to the vacant boundary spot. That moved Ciante Evans from halfback to corner on the field side, while Tunde Adeleke rolled from safety to field half. Finally, Stavros Katsantonis came in to take the remaining snaps at safety. That look is exactly how Hamilton is going to start the Grey Cup.

“I think a big thing about our defence is that everyone knows what everyone else is doing,” Adeleke said on Saturday. “I think anyone would be able to switch positions. Everyone is prepared to move around and at this point I’ve played this position for the whole playoffs, so I think I’m pretty comfortable here.”