MMQB: The most important game of the year

MMQB: The most important game of the year

In the grand scheme of things, the end to this 2021 season was perfect. After missing a full season due to a worldwide pandemic, having the league’s hallmark game be an absolute classic was immensely important. With millions of eyes on the CFL’s biggest showcase, Hamilton and Winnipeg gave us one for the ages. What an amazing way to solidify the league’s return.

Let’s be honest. We had no idea how things were going to go this year. We’re living in completely unpredictable times, so getting to the 108th Grey Cup was no guarantee. But the protocols in place worked, every team played 14 games and we got there, which was a win in and of itself.

The realities of missing a full season added extra challenges to this year’s endeavour, however. November 2019 to August 2021 is a long time to go without games, which means the CFL had to fight to put itself back on a lot of radars. And when you look at recent crowds in Winnipeg and Hamilton, that job was accomplished in many ways.

But for those who were slower coming back, Winnipeg’s 33-25 overtime win on Sunday was the perfect reminder of why this league is great. For those watching CFL football for the first time, watching that thriller in the midst of an electric, sold-out atmosphere was a great introduction to the Canadian product.

Bombers fans are elated this Monday morning. Tiger-Cats fans are still smarting from a heartbreaking finish. But for fans of this league, like we all are, the 108th Grey Cup was an important finish to an important season. I’m so glad that’s the way things went.

In a title game between two teams as even as Hamilton and Winnipeg are, the littlest of things can end up making the difference. And those little things are certainly scrutinized to the highest degree. That’s exactly what we saw on Sunday.

The first small detail was a two-parter. When Winnipeg opted not to take the ball after winning the opening coin toss, it gave them the option to defer again to start the third quarter. That’s what they did, and it gave the Bombers the wind in the fourth quarter. Knowing how much of a factor the elements were, Mike O’Shea knew those decisions had a chance to be important.

“If you win the toss, you’ve got a really good chance in the fourth,” said Winnipeg’s head coach. “And that’s what it came down to really, was we got some opportunities that we drove a little bit. But you can also pin them a little bit.”

It wasn’t the sole deciding factor in the win, but O’Shea’s decision made an impact. Winnipeg didn’t score more than four points in each of the first three quarters. They scored 15 in the fourth. Part of that was on execution and game plan adjustment, for sure, but it’s also no coincidence it was done with the wind at their back. 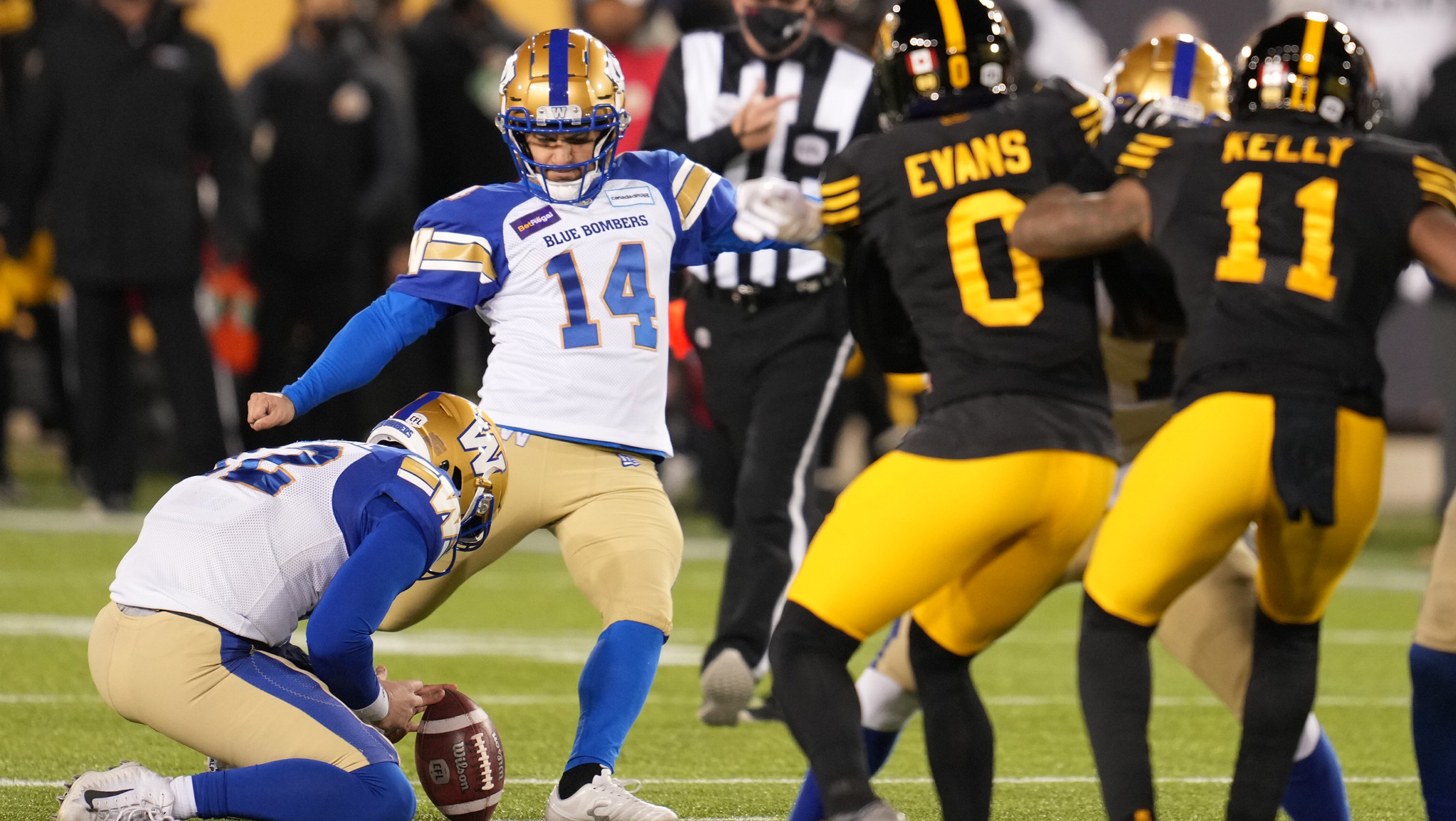 Sergio Castillo made all five of his field goal attempts in the 108th Grey Cup and got a big boost on kicking and punting with gusting winds at his back (Peter Power/CFL.ca)

As part of that fourth quarter, the Blue Bombers turned a 22-10 deficit into a 24-22 lead after Sergio Castillo’s fifth field goal with just over two minutes remaining. Well, that lead moved to 25-22 after Hamilton’s Tim White opted not to run the ball out of the end zone on the ensuing kickoff.

“We gave him the option that he could bring it out or not,” said Tiger-Cats head coach Orlondo Steinauer. “I’m OK with the decision.”

On the surface, the decision seemed to take a late fourth quarter game-winning field goal drive off the table for Hamilton. So, when they drove the field and set Michael Domagala up for his 13-yard chip shot, it sent the game to overtime instead of the Ticats to victory.

Don’t get me wrong, I was surprised by the decision at the time. But who knows what happens if White decides to bring it out. Maybe Hamilton starts at the 12-yard line and their task to drive into field goal range is that much harder. Maybe White fumbles. Maybe Hamilton goes two-and-out. We’ll never know, because it didn’t happen.

What we do know is White’s decision gave the Ticats a guaranteed start from their 35. They drove to the Winnipeg five and were a hand away from scoring a game winning touchdown. More than anything, White’s decision highlighted how much everything is scrutinized that much more when there are only two teams remaining.

I wanted to give a tip of the hat to a pair of Hamilton players who are undoubtedly still hurting after how Sunday’s game came to an end: Jeremiah Masoli and Don Jackson. In the big picture, the Tiger-Cats aren’t in a position to play for the 108th Grey Cup without those two. And on Sunday specifically, they aren’t going right down to the wire without them, either.

After being on the outside looking in for most of the season, Jackson worked his way back into the starting running back mix in Week 13. He was dynamite upon getting that opportunity. Jackson gave Hamilton a dangerous option in the run game and he counted for two touchdowns in three starts down the stretch.

Jackson was just as good in three playoff games and led the way for the Ticats on Sunday with 107 offensive yards. For a guy who was phased out in Calgary and had to work his way into the mix for Hamilton, it was nice to see Jackson show he still has what it takes to be an impact maker in this league.

And then there’s Masoli. He was the guy at the helm as Hamilton secured second in the East Division. He helped the Tiger-Cats beat Montreal. Then he was pulled early in the Eastern Final against Toronto in favour of Grey Cup starter Dane Evans. But when he was called into action against the Bombers, he was ready. In fact, he was more than ready.

Masoli gave Hamilton a chance. He completed 80 per cent of his passes for 185 yards and two touchdowns upon entering the game in the second quarter. He was outstanding under pressure to get the game to overtime. It ended in heartbreaking fashion, but Masoli showed us a lot.

Speaking of crucial choices, Winnipeg’s decision to acquire and sign Castillo in October paid off in a massive way. Remember when the Blue Bombers struggled mightily in the kicking game? That’s a distant memory now. Castillo was perfect, kicking five field goals, including two into the wind and was a massive part of Winnipeg’s victory.