I’m not going to sugar coat it; the Grey Cup was both an incredible game for sports fans everywhere and a tremendous gut punch for every Hamilton Tiger-Cats fan. Both things can be true. I have nothing but admiration for a Winnipeg Blue Bombers’ organization that is well on their way to dynasty status and I feel so bad for anyone who on occasion enjoys wearing black and gold face paint.

As a proud McMaster alumnus and former TSN 1150 employee, I will always have close ties with the Tiger-Cats. However, I will never claim to be going through any of the sports pain that you must have experienced on Sunday night and may still be feeling now.

On my radio show I threw it out to the listeners: How do you get over a game as difficult as an overtime championship loss? Many of the answers involved tears and alcohol. As a (sometimes) responsible adult I am not advocating you go on a LCBO shopping spree to get over your sports blues. Instead, I want to try and help cheer up every Hamilton fan who is still replaying that Jaelon Acklin almost-touchdown in their heads and wondering, ‘What if?’

I understand that nothing I write will 100 per cent make you feel better; hopefully I can at least help you  get over your Grey Cup sting a little bit. 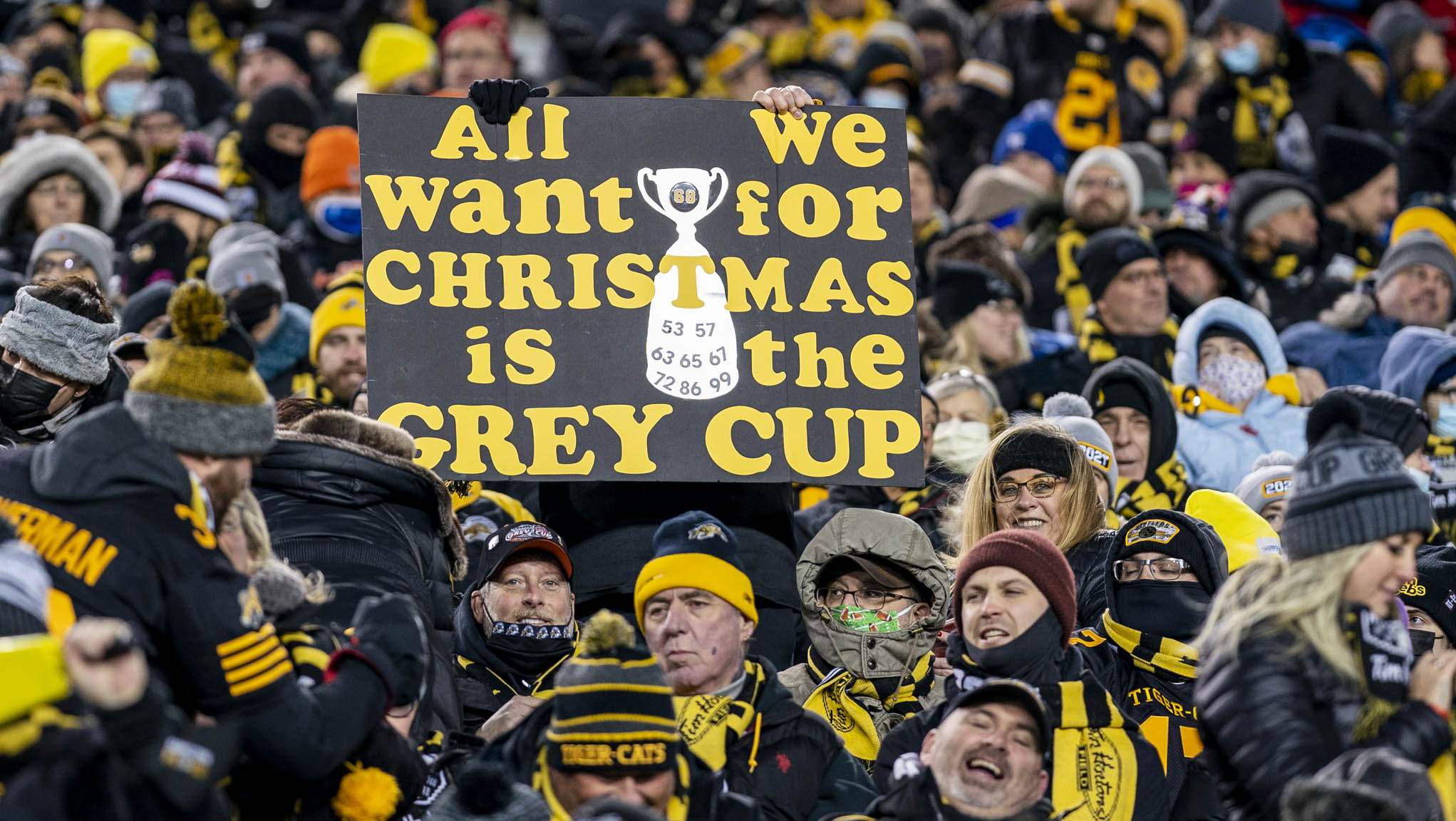 Tiger-Cats’ fans were devastated with their team’s overtime loss on Sunday to the Blue Bombers in the 108th Grey Cup (Kevin Sousa/CFL.ca)

Let’s go back to that near Cup-winning touchdown for a moment. I do not recommend any Hamilton fan go back and watch it, so I viewed it for you. Before the game-tying field goal, TSN replayed the drop but then showed the reaction from the Tiger-Cats owners’ box. There was Bob Young, surrounded by friends and family reacting in shock as for a split second he thought his team had finally captured their first Grey Cup title since 1999.

I bring this up because all Tiger-Cats fans can take solace in having an owner like Mr. Young. He purchased the team in 2003 and in that time the team has made the playoffs eleven times and has seen the construction of Tim Hortons field. You know what stinks more than losing the final game of the year? Being the fan of a team run by incompetent ownership. Just ask fans of the New York Knicks or the Washington Football Team.

Good ownership translates into smart hires at all levels and minimal amounts of consecutive losing seasons. So, the next time you are wondering if Tim White should have returned that kick just remember you have stable and smart ownership. There are so many fan bases across North America that cannot make the same claim.

I do not need to remind anyone from Hamilton that you are the current owners of the longest Grey Cup drought in the league and since 2013 your team is 0-4 in the Grey Cup. But there is something to be said about being able to watch a winning product on a more than consistent basis. I understand the goal is to “win it all” but only one team gets to hoist the trophy so every year there are going to eight disappointed fan bases annually.

Really, you cannot measure all your sports joy by just championships. In the past eight years your team has a winning record in the regular-season, you got to be a part of eight playoff victories and four Eastern Division titles. Yes, the ultimate prize has eluded you but more weeks than not your favourite CFL team did end up with a win.

Also, you have to admit over these past eight years you have been treated to more than your fair show of All-Star seasons from the likes of Zach Collaros, Jeremiah Masoli, Brandon Banks, Ted Laurent, John Chick, Luke Tasker, Chris Van Zeyl and Frankie Williams, to name a few. For years you all have been entertained by the pontifications of Simoni Lawrence. I know he isn’t exactly beloved in some markets but when he’s on your team he is a bag full of fun to follow and listen to.

Let’s get the hard part of this off-season out of the way: Yes there is a chance you have seen the last of Orlondo Steinauer and Tommy Condell on the sidelines of Tim Hortons field. That just comes with the territory of having a winning program, your coaches get poached. The positive is that if it were to happen, your team is blessed with a good owner and a smart executive team so the odds are the next coach would know what they are doing.

Also, smart young coaches see what is going on and Hamilton would be a hot landing spot for coaches looking to make a name for themselves. Or maybe it will be Mark Washington’s time. He’s done a great job as defensive coordinator and has a wealth of experience. The point is, try not to panic. Losing someone as talented and honourable as Steinauer would hurt, but you never know where the next great coach will come from. He may already be on staff. 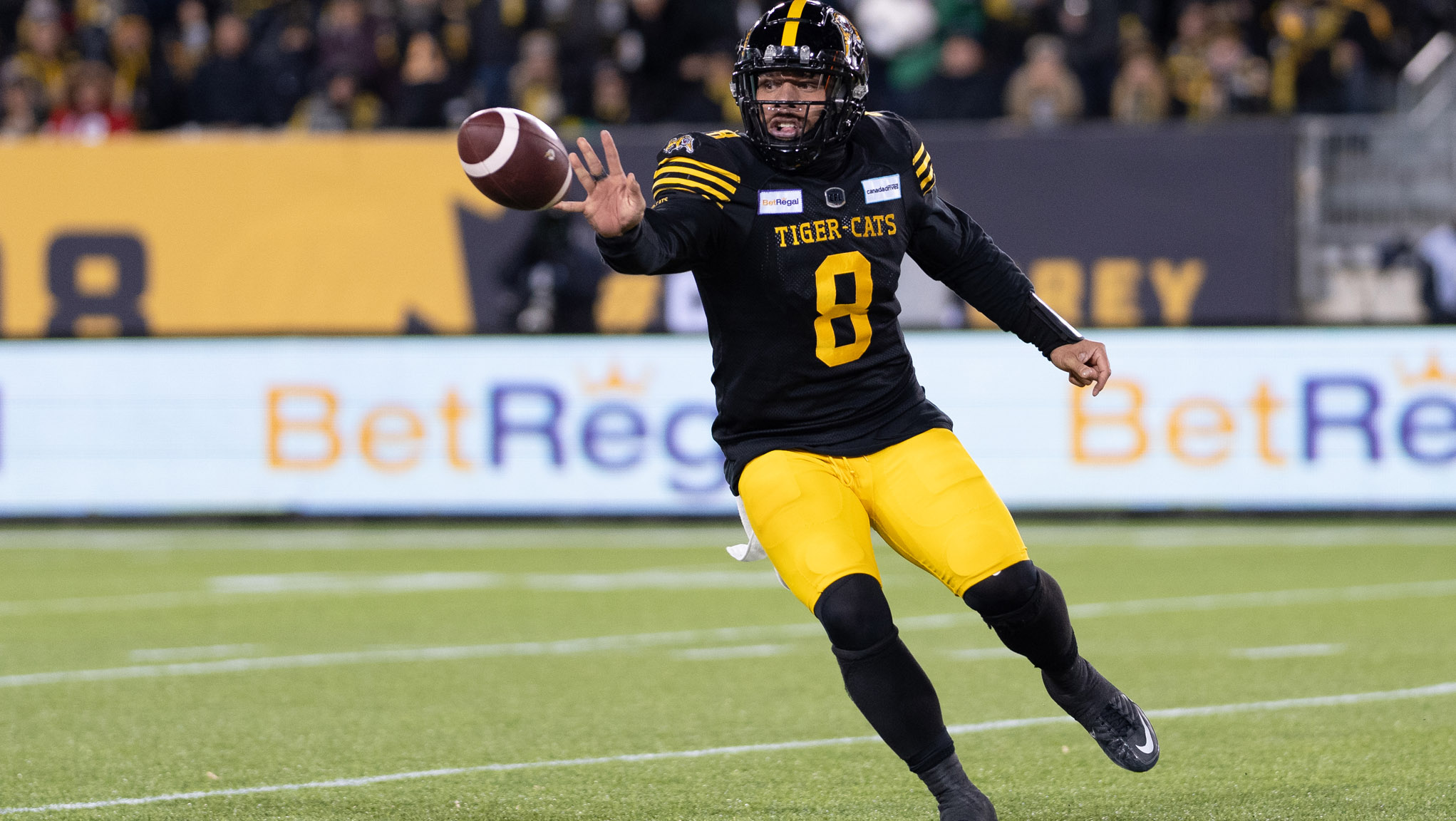 Jeremiah Masoli has spent the bulk of his career in Hamilton and will have options to weigh this winter as one of the team’s numerous pending free agents (Kevin Sousa/CFL.ca)

As for free agency, well yes, the possibilities are about as scary as trying to throw the ball in the wind last Sunday. I would give you the list but let me save you the time, just about every big-name player and star on this team is a free agent, from Jeremiah Masoli to Ja’Gared Davis to Brandon Banks.

If it makes you feel any better, the same anxiety you are going through is being felt pretty much throughout the league, as one-year contracts are the norm. Hamilton has the advantage of being able to sell a winning culture, an excellent stadium and a city with far more reasonable housing prices than many other major cities in Canada. Seriously, the price for a detached home in Hamilton is like $300,000 less than Toronto and nearly $500,000 cheaper than what you will find in Vancouver.

Speaking of the city, between the Niagara Escarpment, the Lake Ontario waterfront, the 100-plus waterfalls and all the hiking trails around it, may I recommend to all dejected Tiger-Cats fans to go out and experience Mother Nature? The fresh air will do you some good.

Now while I did say I would not advise heavy drinking to get over the Grey Cup loss, do you realize that Tim Hortons Field is a mere 35-minute drive to the wineries near St. Catharines and 45 minutes away from Niagara on the Lake? Please don’t overdo it but I highly encourage you to sample some of our local wines (Chardonnay, Gamay and Pinot Noir are best) to get over the final result of our local football game.

In the end I am not going to tell how you feel. Honestly if I was a 100 per cent born-and-raised Tiger-Cats fan I’d be hurting for at least a week or so, with the occasional pang of pain every couple months. I hope you can take joy in knowing you had another great year. Your team has been so entertaining for nearly a decade and you live in a great city with so many entertainment options. I don’t expect the last 1,000 words to have flushed away all of hte Grey Cup memories but hopefully I’ve eased the pain somewhat as you await the start to next season.