O’Leary: Alouettes go all in with Adams 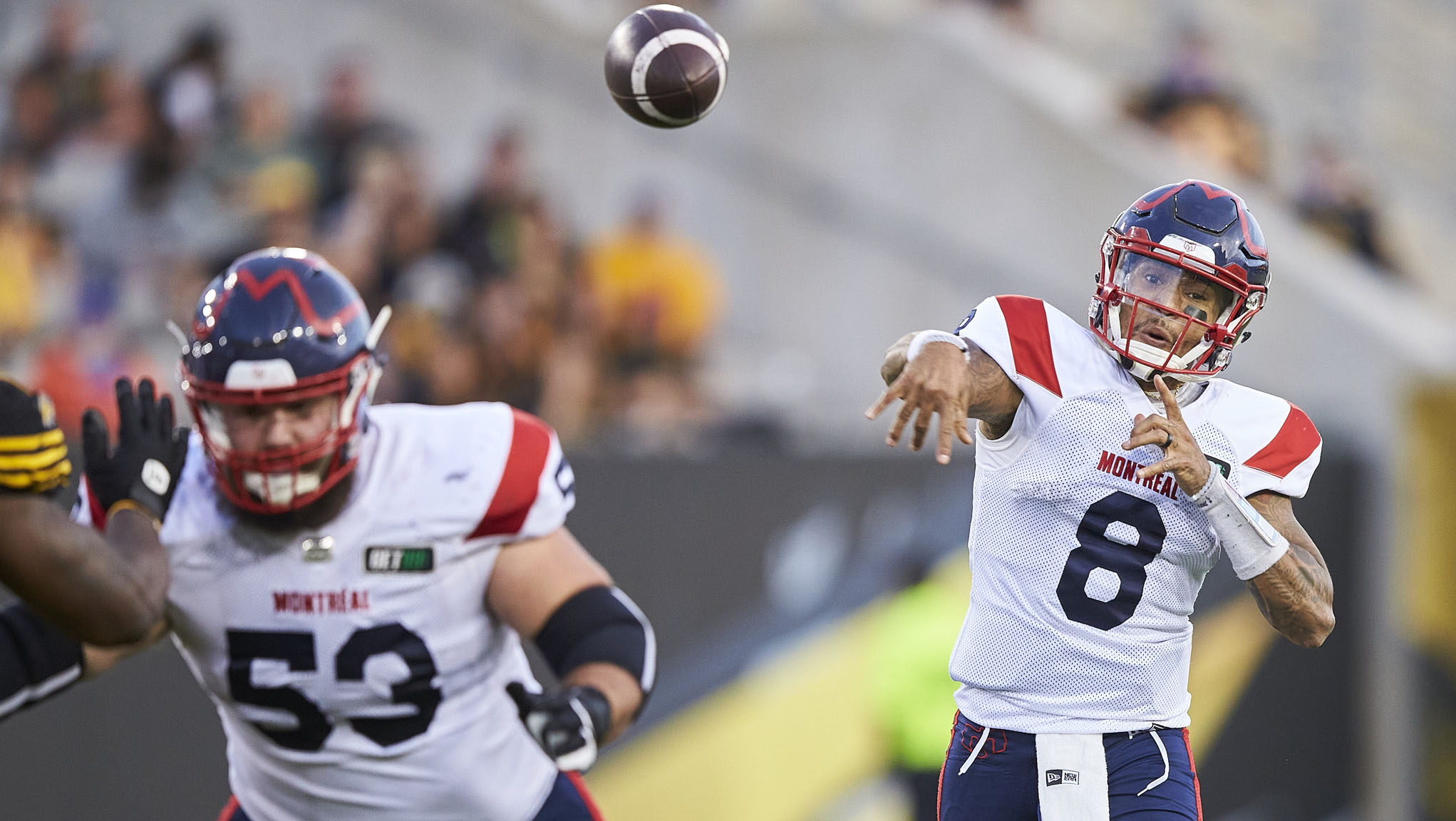 O’Leary: Alouettes go all in with Adams

Normally, a season-ending shoulder injury to your starting quarterback can open up all kinds of doors to uncertainty. When your team brings in a highly-skilled and respected quarterback in the interim, it can make things doubly worse.

That wasn’t the case in Montreal, though, where general manager Danny Maciocia and quarterback Vernon Adams Jr. worked out a two-year extension that was announced on Thursday. The club also included one of Adams’ favourite on-field targets and best friends, Eugene Lewis in Thursday’s news. Lewis has signed a one-year extension to stay with the Als through 2022.

“When we did what we did at the end of the season it was just to make sure that I gave some hope and that I inspired people in the locker room and our coaching staff that after V.A. went down that there was no quit in us,” Maciocia said of the late-season trade for Trevor Harris.

With the former Edmonton Elks’ pivot at the helm, the Als fell in the Eastern Semi-Final to the Hamilton Tiger-Cats. While Harris played well in his short time with the team, he did in fact turn out to be a rental to give them a puncher’s chance at winning a Grey Cup. 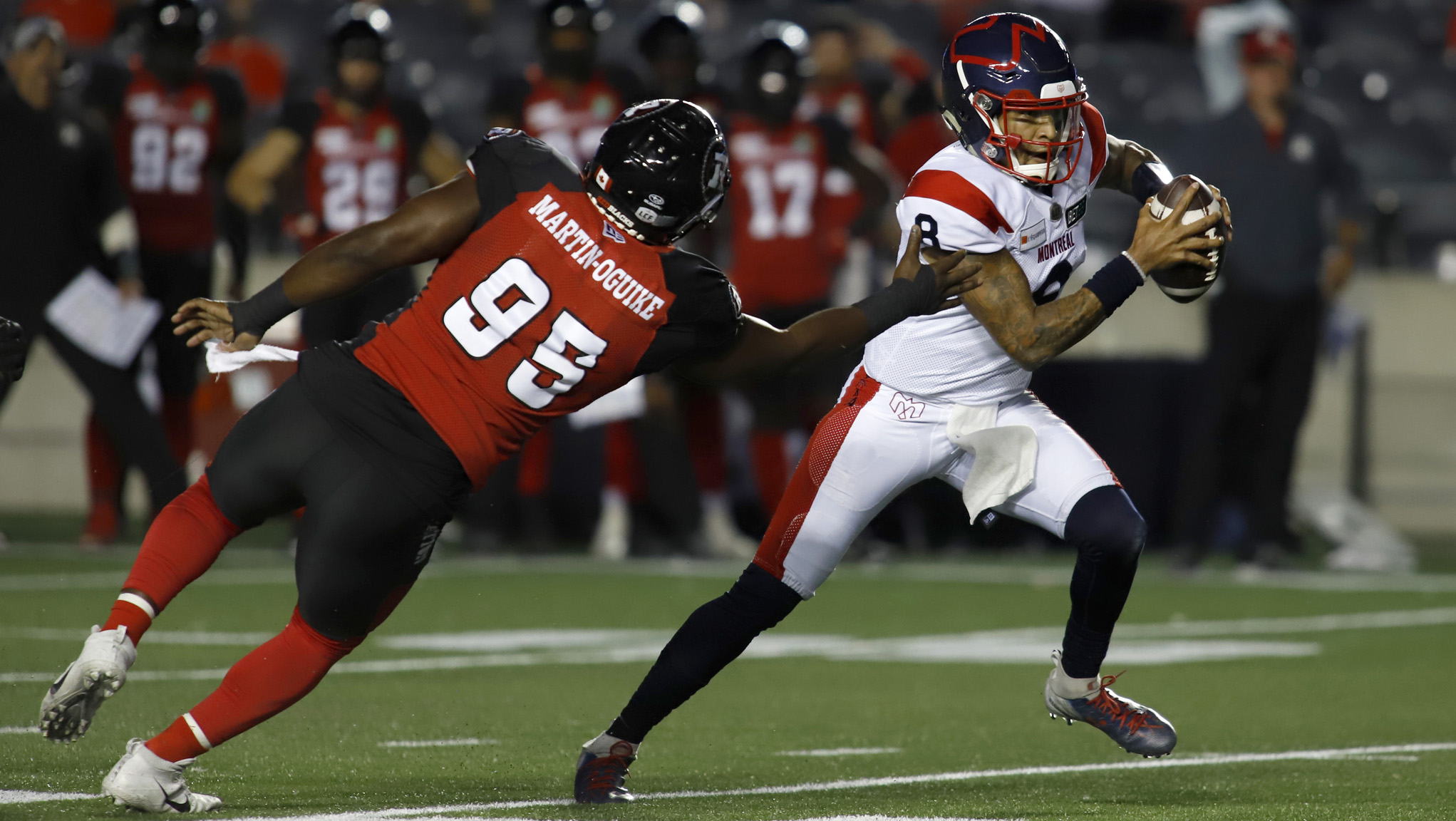 Adams’ elusiveness adds an element of unpredictability to the Alouettes’ offence, which is something that led GM Danny Maciocia to stick with him as the team’s starter through 2023 (Patrick Doyle/CFL.ca)

“We were always going to try to find an avenue a different mean, to try to get people to come in here and help us win football games and hopefully win a championship. My feelings and my vision which is shared by many others here…our coaching staff, our team president and team ownership felt the same way all along. We’re going to keep investing in V.A. He’s got a tremendous upside, future. His ceiling is extremely high.”

In his first full season as the team’s starting QB, Adams played in eight of his team’s 14 games this year, making 142 of 239 passes for 1,949 yards with 14 touchdowns and nine interceptions, while adding 239 rushing yards. The 28-year-old had just taken his team through a dramatic comeback, overtime win over the Ticats, when he injured his non-throwing shoulder against Ottawa.

“I feel good. It’s getting stronger,” Adams said, noting that he’d been rehabbing his shoulder in Montreal and will continue that work in his off-season home of Seattle on Monday.

“I think about mid January, that’s when our team doctor said I should be feeling good. A little aches and pains here, but I’m feeling good, man. I’ve got a rehab plan set up, workout set up. I’m just going to be working hard for 2022.”

The way that Adams handled his injury for the remainder of the season carried a lot of weight with Maciocia and the rest of the team. He was a constant presence on the sideline, helping Harris acclimate with his new team and at the same time, learning from an experienced starting quarterback that’s been a part of two Grey Cup-winning teams.

“There’s two ways you can go about it,” Adams explained.

“You can pout and then kind of let the depression creep up on you, because it’s a tough thing to handle, you know? Or you can be a pro, you can learn from a veteran quarterback who’s done it and you could help out some of these young guys and just continue to be a great energy around the locker room. I think I chose that path instead.” 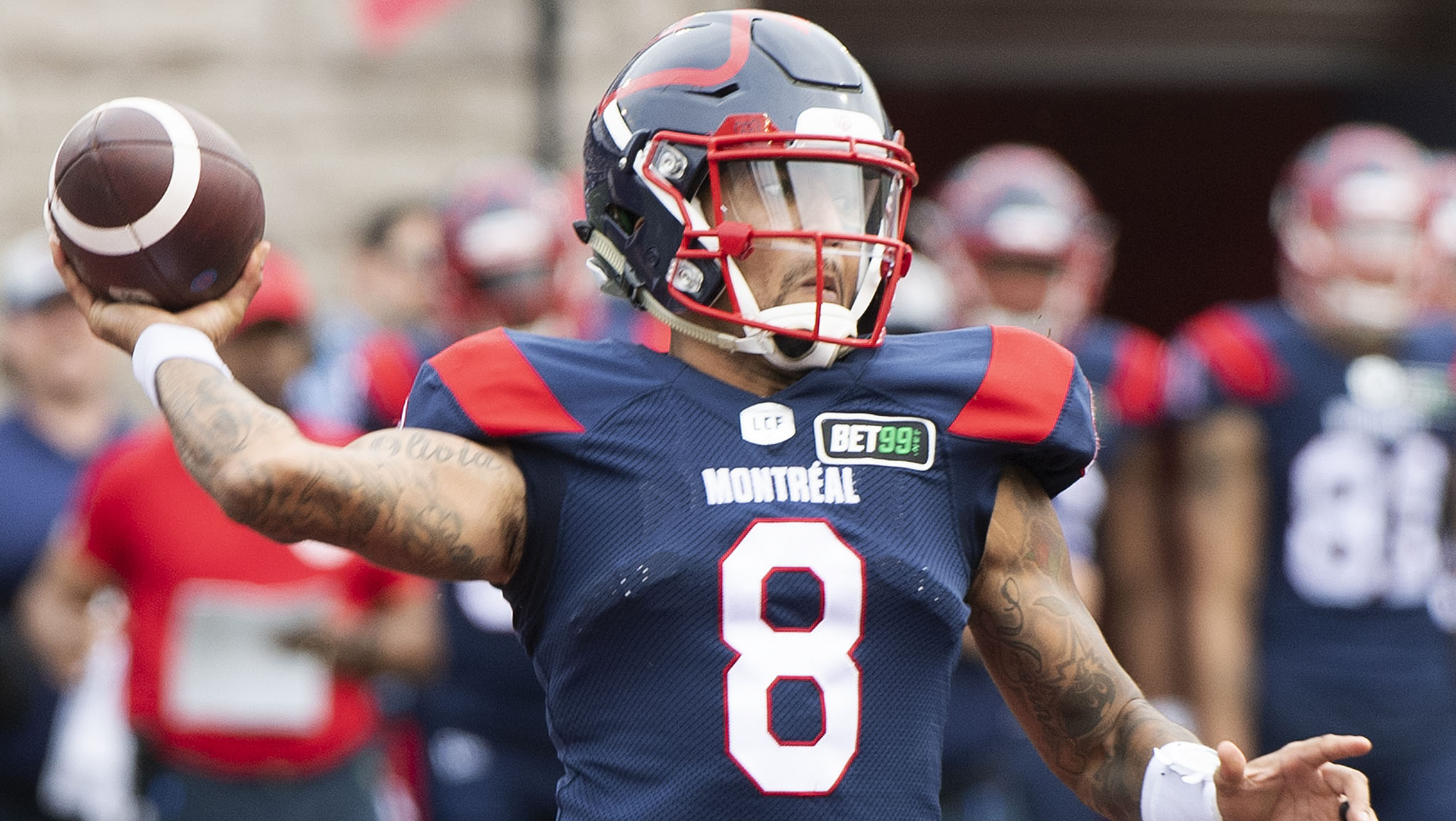 Adams’ approach to his season-ending injury — staying as a supportive presence on the sideline — resonated with his teammates and the organization (Photo: The Canadian Press)

In his time in the CFL, Maciocia’s been around two of the greatest quarterbacks the league has ever seen, with Anthony Calvillo at the start of his coaching career in Montreal, then with Ricky Ray in his time as the coach and GM in Edmonton. Adams is a more dual-threat QB than the two legendary pocket passers, but Maciocia sees similarities in the presence Adams provides the present-day Alouettes. He also sees glimpses of another legendary CFLer in Adams.

“It reminds me a lot of Tracy Ham, just what he can do with throwing the football downfield the way he distributes the ball. I would say he’s quite scary when he gets flushed out of the pocket and that’s where I think he can bring that other dimension, that another element to the game that maybe a guy like A.C. and Ricky didn’t have.

“That’s what I’m looking forward to seeing here in the next few years. As far as leadership skills are concerned he’s as good as the other ones we just mentioned. People believe in him here and that’s whywe’re all excited about the fact that he’s going to be here for the next the next little while, along with Geno (Lewis).

Lewis, who had 964 yards in 13 games catching passes from three different quarterbacks this season, likely would have had a career year had a full schedule been possible. Having come through the Als’ lean years with Adams before the team enjoyed its turnaround in 2019, he said he was eager to help the team take the next steps in its quest for Montreal’s first Grey Cup since the 2010 season.

“I’m all about respect and loyalty, man,” Lewis said. “To be honest with you, there’s unfinished business. There’s so much that this city has given me that I want to give back. A Grey Cup is everything. It’s Grey Cup or nothing at this point.

“We’re going to have a potential to make a run. We’ve just got to take it to the next level.”