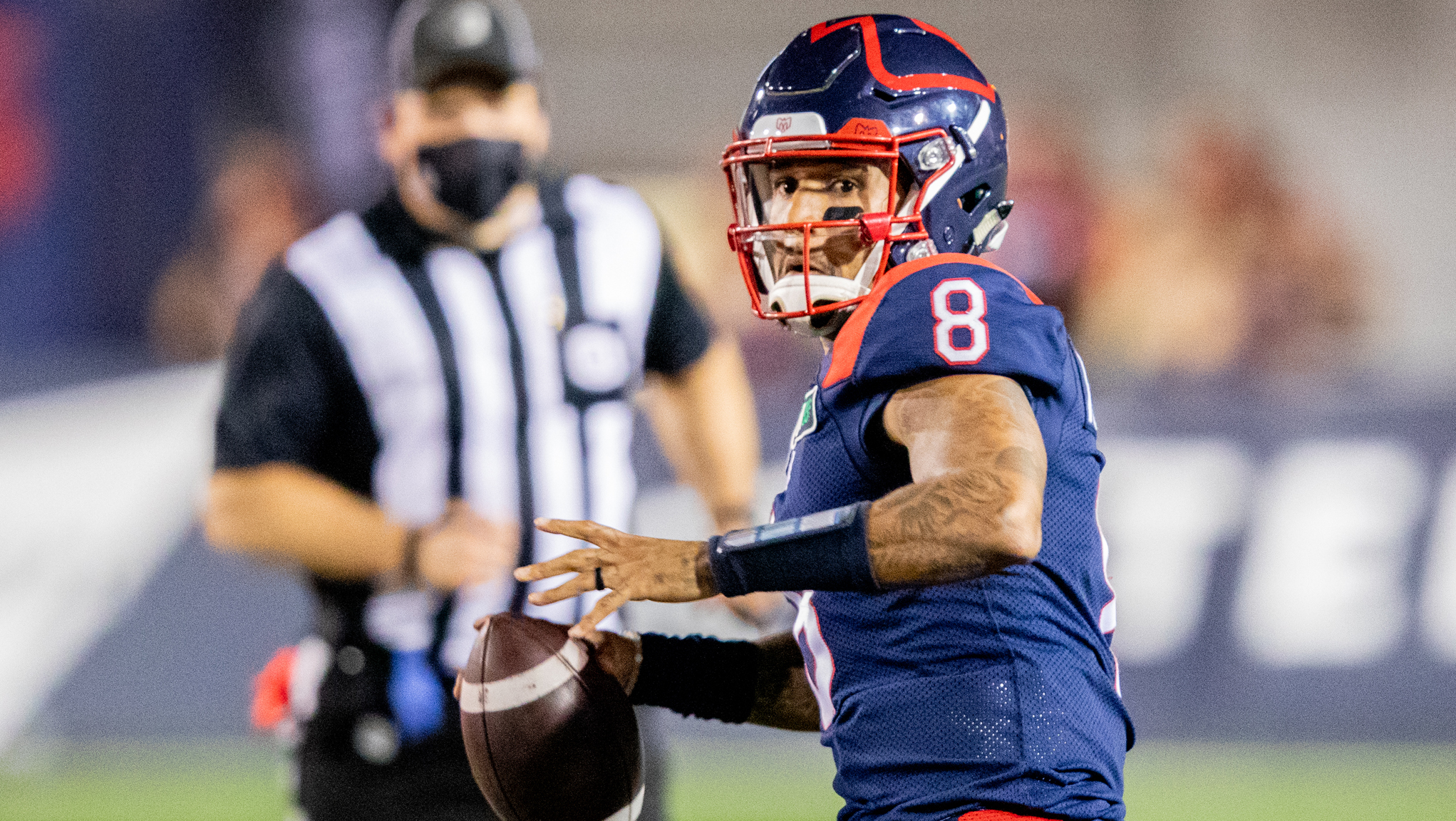 How is everyone doing?

I’m not sure where you are reading this but I bet you are in the middle of some sort of COVID-related lockdown. Before we set forth on my goofy dreams for a perfect CFL off-season, I just wanted to say that I hope everyone is doing as well as possible. From children not able to attend school, to parents trying to re-organize their entire schedules to small business owners and everyone else impacted, I hope there is enough positive to counter balance everything else going on.

With the off-season just getting warmed up with some signings and new coaches finding jobs all across Canada, I figured it was time to throw out what I would love to see happen between now and the first pre-season game on May 23.

I cannot guarantee that any of my wishes will be realized but I bet if they did happen all CFL fans would be wildly entertained.

I would like Edmonton Elks head coach Chris Jones to reverse course and worry about all outside noise.

Earlier this week, Jones during a video conference with the media went full coach cliché and said: “We have a big job to do there in Edmonton and we can’t worry about any of the outside noise or what anybody says.” That’s all well and good but what about all of us who enjoy a good midweek controversy?

We already had the coach say of Cody Fajardo: “I didn’t think Fajardo was a top-five guy at quarterback. I know he’s a good runner. I know he’s a winner. But I just don’t see him as a passer.” Listen, I understand that if you read the full quote that it was more about Jones praising the work his offensive coordinator Stephen McAdoo has done over the years but nonetheless that sentence made waves and it will be a headline again on June 18 when the Saskatchewan Roughriders travel to Edmonton.

Please Chris, listen to all the outside noise and react accordingly. You want to question the Toronto Argonauts accounting or publicly say how much you would love to coach Michael Reilly again, even though that’s against all the tampering rules, I’m here for it. I’ve written about it many times; all sports leagues need villains and no one wears the black hat as well as Coach Jones.

Harmony in the Calgary quarterback room.

If you are just reading the headlines, you can see the potential for a four-alarm quarterback controversy. On the one side you have Bo Levi Mitchell, the highly paid veteran quarterback who had his worst season as a starter last year. Between his shoulder injury and CFL-high 13 interceptions, 2021 was a year to forget for the two-time MOP award winner.

Enter 24-year-old Jake Maier, who kickstarted his CFL career with three straight 300-yard passing games and put up solid numbers for a rookie.

How many times have we seen this situation play out with the older, more expensive quarterback with some injury baggage is moved aside for the new young thing? Here’s hoping we don’t go down that predictable route.

What I want to see is Maier spend one more year learning from one of the game’s best within an organization that knows how to develop young talent. We see Jake come in and dazzle for a couple games but 2022 is more about a Mitchell bounce back season. At the end of the year Jake has progressed to overqualified back-up and hooks up with a quarterback needy team.

We get to watch Mitchell dominate again all the while a young and talented passer is developed to be a potential star somewhere else. It’s win/win for everyone! Now about the team asking Bo to restructure his contract again ….

Anthony Calvillo gives Vernon Adams Jr. not only his wisdom but his secret to good health

There are so many passing statistics out there to highlight the greatness of Calvillo as a quarterback but what about his ability to be available week after week? From 2000 to 2012 Anthony started 216 out of possible 234 games. That’s just ridiculous.

His protégé’s season was cut short with an injury to his non-throwing shoulder during a win over Ottawa. Adams Jr. did not have the season that many of us predicted (yeah, I had him winning the MOP) as he battled his way through an inconsistent year that saw him throw seven interceptions in his last four games.

My wish is that both men get locked together in a well-ventilated room with Calvillo filling Adams Jr.’s head with the knowledge that can only come from a quarterback who dominated the league like so few have while also mixing whatever magical concoction that kept him healthy for so long and giving it by the gallon to Adams.

That we get to see more CFL references on popular TV shows.

Recently we were treated to another CFL reference on ‘The Simpsons’ involving the Springfield Atoms, the Winnipeg Blue Bombers and their team bus. Whenever I see a CFL reference it always feels like when I see a long-lost friend on TV, that feeling of, “Hey I know that guy!”

As a fan of ‘Rick and Morty and ‘Southpark’ I would have no problem with Zach Collaros appearing in an alternative universe fighting one of the many Ricks or Cartman writing anonymous blog posts ripping Chris Jones.

Micah Awe becomes the official spokesman for the wines of Prince Edward County.

Did you really think I would go this whole time without finding a way to work in wine?

Did you know that Micah’s twitter account is @AweNChardonnay? The marketing and branding potential is off the charts! I say he re-signs with Ottawa, which is only a three-hour drive from one of Canada’s best wine regions. You want a Chardonnay with as much power as a charging linebacker? Try a glass of Closson Chase, its Micah’s choice after a win. All right maybe I have to work on the copy, but if the league wants to continue to branch out and attract new fans why not go after the wine crowd?

I’m thrilled to see Reggie Begelton is back with the Calgary Stampeders. Nothing would be better than if he can re-capture his 2019 form (102 receptions for 1,444 yards and 10 touchdowns) and help Bo Levi Mitchell get back to his usual production.

The greedy side of me was hoping it would be longer than a one-year deal. This wish is a tough one as I have no earthly idea what needs to be done from an economic side to make this a reality. I am not privy to the negotiations that go on between the CFLPA and ownership and quite frankly, I am not here to choose sides. I think we can all agree that we live in a world where there are far too many people choosing sides on important issues versus actually casting aside allegiances and just listening.

Every league is always looking at ways to make their game better. Whether it’s finding way of speeding it up (baseball), increasing scoring (hockey) or eliminating so many ticky tac fouls (basketball) constant self-improvement is key for every professional sports league. For the CFL, I’d love if the trend was for longer contracts. It not only fosters stability but it allows fans to really invest in a player because they know he will be around for years to come.

On a selfish note, do you know how hard it is to keep up with player movement? I’m all for some frenzy in my free agency but wow, the last couple years it’s been nothing but chaos. Here’s hoping the two sides can work to make this a reality.

Usually, I go full selfish and I want my favourite CFL players to stay in Canada but after reading a Paul Friesen article in the Winnipeg Sun, I’m rooting for the Winnipeg Blue Bombers defensive back to make in the States.

It was this quote that stuck out for me:

I would hate to see the CFL All-Star go through all that travel and not hook up with one of those teams. Also, do you how much of a pain it is to do that much air travel with Omicron cancelling flights all over the place?

TSN and CFL start their own “Manning Cast” with Matt Dunigan and Marshall Ferguson.

Matt Dunigan is one of the best story tellers I have ever interviewed and a Hall of Fame quarterback. I learn something new every time I read a Marshall Ferguson column. Both are great broadcasters; you get an old school/new school dynamic plus maybe Matt will break out some of his old barbecue recipes.

Sometime in late April I want to be able to read a Pat Steinberg 2,000-word column that is nothing but gushing praise for the work done by the second general manager in REDBLACKS history.

Ottawa’s struggles have been well documented; this fan base deserves a more consistent winning product. I’m hoping for a harmonious relationship between Burke and Paul LaPolice with both men being in complete lockstep with all roster moves.

Speaking of which I want to read about how Burke ran circles around some of the other general managers and can you believe he got Stanley Bryant, Adam Bighill and Greg Ellingson to all sign such “team friendly” contracts? The East is so close to having all four teams playing at a competitive level, we just need Burke and company to get it done.