When the Hamilton Tiger-Cats announced they’d extended Dane Evans on Wednesday night the team set its direction not just at quarterback, but for the franchise overall — at least — for the next two years.

Through the Manziel circus of 2018, with Vernon Adams Jr. also in camp and Masoli the presumed starter, Evans worked quietly and quickly showed he possessed the raw ability to turn heads as I talked with several people at training camp surprised how difficult Evans was making the Manziel decision strictly from a talent perspective.

How far he’s come through that fire.

With Jeremiah Masoli and Evans working in concert, Hamilton was content to rely on overall talent level and depth. A quarterback room based on mutual respect and healthy competition drove Hamilton forward, but no two-quarterback system is eternally sustainable as head coach Orlondo Steinauer referenced Thursday: “Two qualified guys, we knew we had a luxury to have two guys in house and that wasn’t likely to always be the case and this is the first step in the right direction for us electing to go with Dane,” he said.

With Evans being five years younger and what I believe to be an equally high, possibly even superior talent ceiling, the choice was simple.

While Hamilton’s defence powered them to a playoff push and Grey Cup appearance in 2021, the offence often lacked identity or consistency. The blame for this is equal parts offensive line struggles, multiple injury-induced quarterback switches and a gaping hole of productivity left without Bralon Addison to pair with Brandon Banks. 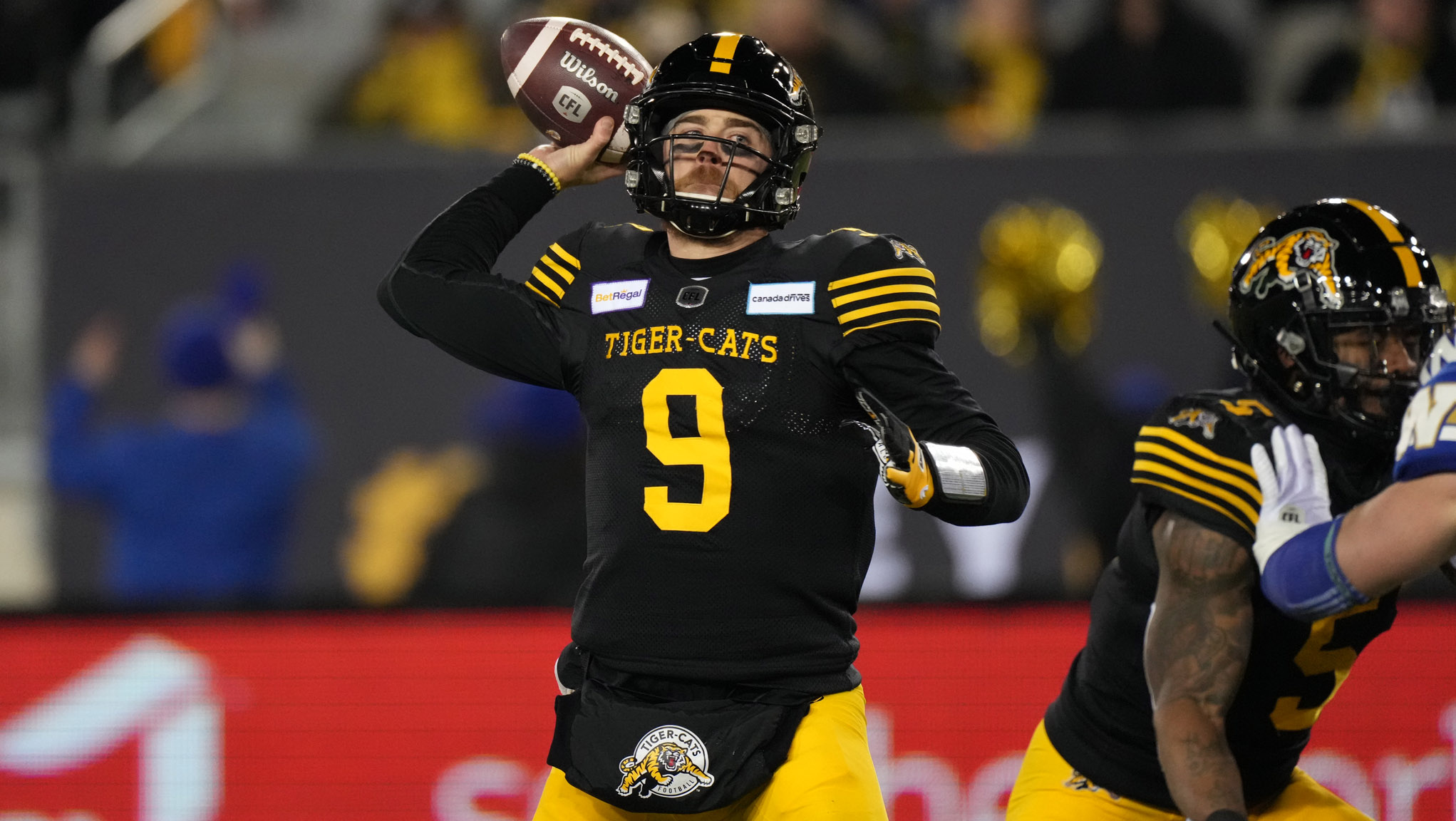 While none of those variables are completely avoidable, one antidote that I believe Hamilton just found is building a team with vision around a singular quarterback.

Evans as the primary protagonist gives direction and guidance to every move made from roster construction, to playbook discretion and most importantly on field expectation.

Receivers that work well with Dane will stay. Those who don’t match his game, or the system built to amplify his skill set will not. This is the reality of attaching your fate to a young, up and coming pivot. Everything you do is a reflection of where their leadership and playmaking will take you.

Of course, the luxury of working Evans in with little to no pressure or expectations is gone, but what a blessing it was. Under the cover of disastrous 2017 campaign, the smoke screen of the Manziel 2018 training camp, observing an MOP-level offence run by June Jones and playing hero to a fallen comrade when Masoli tore his ACL in 2019, Evans was allowed to ply his trade, improve and commit himself quietly without much criticism.

This all changed with Hamilton reaching the 2019 Grey Cup and Evans’ painful neck injury exit in 2021’s home championship. Still, Steinauer trusts that Evans has the right characteristics to persevere. “Dane’s resilient, a winner, a leader. He has a high level of comfort with (OC) Tommy Condell and Dane just loves football. He’s passionate about the game and his teammates,” he said on Wednesday night.

Go beyond the intangibles and the question that really matters in the production based, what-have-you-done-for-me-lately business of professional football is what does Dane Evans do well? Why is his skill set worth building around and what could his Ticats teams look like?

Here are his career attempts to date by location: 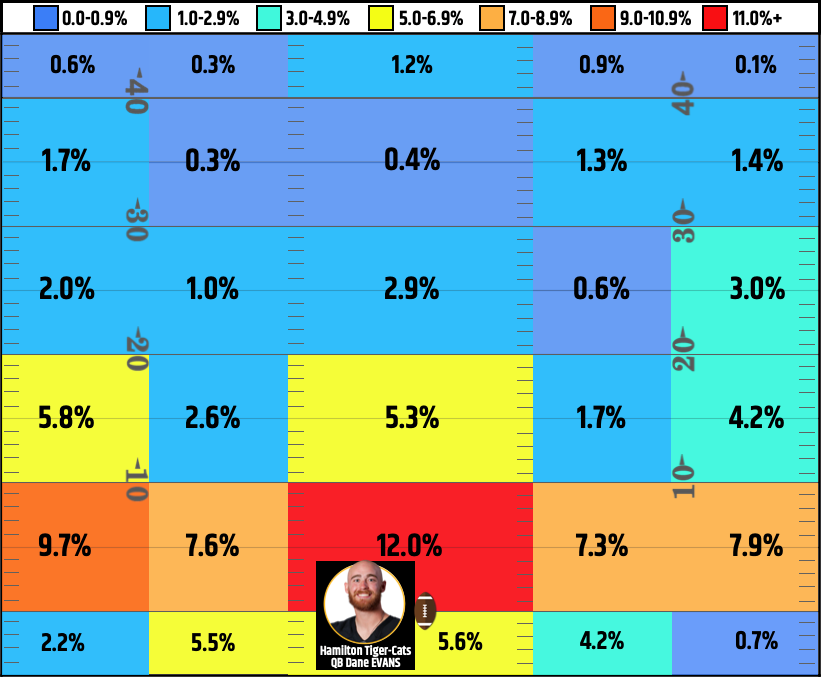 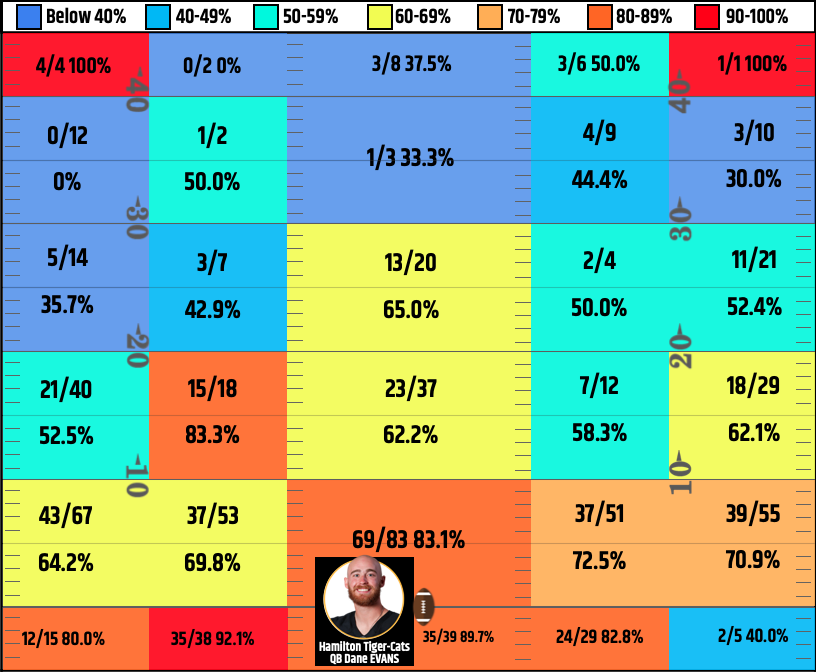 To this point Dane Evans is an extremely effective intermediate passer who is wise enough to take check downs and live to play another down. He is strangely 5-5 career on throws to the deepest corners of the field (40-plus yards in air outside the numbers) is one of the more effective CFL quarterbacks at throwing left, always a good sign for vision and offensive adaptability.

All of this means little without reference though, so here are Dane’s attempts and completion percentage per location vs. The CFL averages through his career.

If this looks like a pile of useless numbers let me tell you two specific lessons learned from this information that tell me that Evans has a bright future.

1) A few years ago I did a study on where the most productive place is to throw on a CFL field. Back-to-back years it was between 10-20 yards in air between the left hash and left numbers.

Why? With the ball on the left hash this is the place quarterbacks come back to on their third or fourth read often after reading the wide side. They’ll read one to two and flip their eyes backside to a dig or curl route sitting between zones or breaking free from man coverage. It can also be a wide side curl route thrown to the field slotback when the ball is on the right hash.

Evans completes an absurd 83.3 per cent (15/18) of career passes to this hot spot, good for 23.3 per cent above CFL average. His ability to push the ball into the teeth of the defence with accuracy has been rewarded, so far.

2) Evans isn’t afraid to throw it consistently down the middle of the field. He attempts more passes between the hashes in five of six possible depths. The only other quarterback to play the game this way? Bo Levi Mitchell.

By challenging the defence down the middle, Evans gains more credibility holding safeties with his eyes, opening up shots on the outside while also striking gold occasionally against man coverage through the heart of the defence.

Both of these trends are major positives for me, with plenty of room for growth in other areas and kinds of throws. Now it’s time to embrace the challenge of turning weaknesses into strengths for Condell, Evans and Steinauer.

The Ticats will go as Evans goes over the next two seasons. While Steinauer isn’t one to put the pressure on any one player, he makes it clear each time he talks quarterbacks just how much they mean to his teams’ successes and failures.

“QBs touch the ball every play and have to be able to lead naturally and authentically and Dane embodies that,” Steinauer said. “It’s the things behind closed doors that nobody sees that makes Dane extremely special.”

I spoke with Evans after he’d been injured in the Grey Cup game.

I asked if he was OK. The fiery competitor within turned his frustration to pure anger for a moment before the Dane I knew from my time covering the Ticats reappeared after I let him know I was sorry and just wanted to make sure he would be OK long term.

That’s the person Steinauer glows about, the one Hamilton fans largely begged for through the second half of the season and the one who will carry Hamilton forward.

This was the hat in Dane’s locker that night ready to be worn out, soaked in champagne and singed by victory cigars. 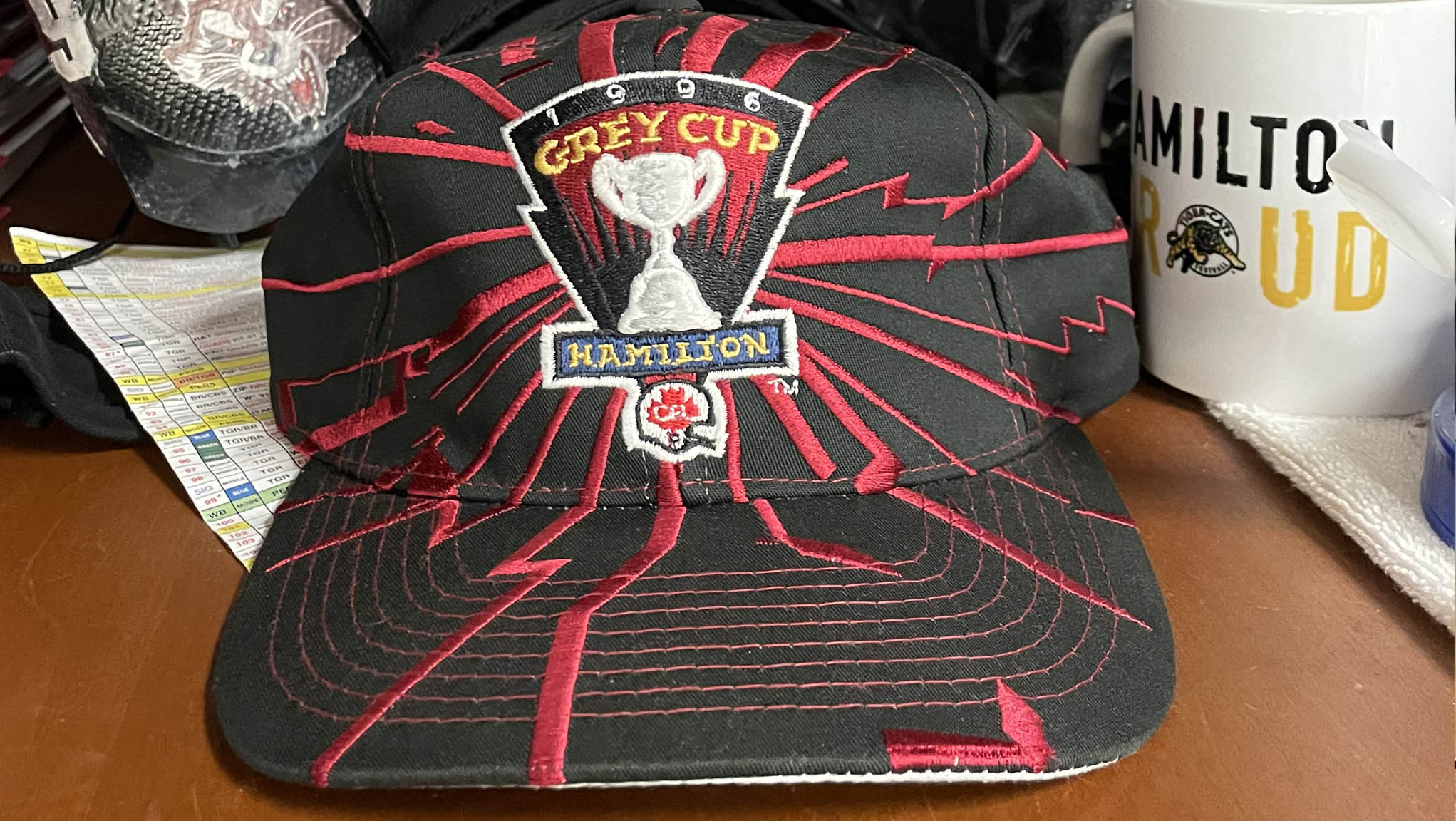 Stripped of his chance to make vintage Grey Cup gear new again across Hamilton, Evans new two-year deal will allow ample time as The Man to work behind the scenes and in front of the camera showing he can make Hamilton a Grey Cup champion.

With a deal that expires after the Ticats host another Grey Cup in 2023, we’ll likely be having this discussion again in two years, with Evans either an icon of recent Ticats’ football history or being questioned as the face of the franchise after coming up empty on four chances to win Hamilton a Grey Cup.

Such is life in the pressure packed world of CFL quarterbacking.