Ferguson: Why Collaros and the Bombers work so well together

Ferguson: Why Collaros and the Bombers work so well together

Trying to define the worth of Zach Collaros to the Winnipeg Blue Bombers is no easy task. The value appears in so many different ways it’s tough to nail down exactly what separates him from Bombers — and many CFL — passers of the past.

After Winnipeg reportedly and rightfully made Collaros the CFL’s highest paid player Thursday night with a one-year extension, it’s obvious there is a mutual appreciation between the lovestruck companions who somehow exited the honeymoon stage into real life and found a way to win back-to-back Grey Cups through it all.

So what is it that makes Collaros different at this stage in his career? After two dog walks, some time spent staring at the ceiling and a heavily caffeinated green tea, I believe the best way to analyze his meaning to Winnipeg is to differentiate the tangible from the intangible.

First the intangible. Collaros is equal parts vibe and quarterback. The hair, the smooth answers on camera and the calmest demeanour of any current CFL quarterback all define his aura these days.

You might think all of these little bits of character and personality don’t matter all that much but they endear Collaros to any locker room fortunate enough to employ his services. In Hamilton, he was beloved by all in the room and would frequently grab dinner at a favourite downtown Hamilton restaurant where fans could swing by and get a picture or an autograph free of judgment. 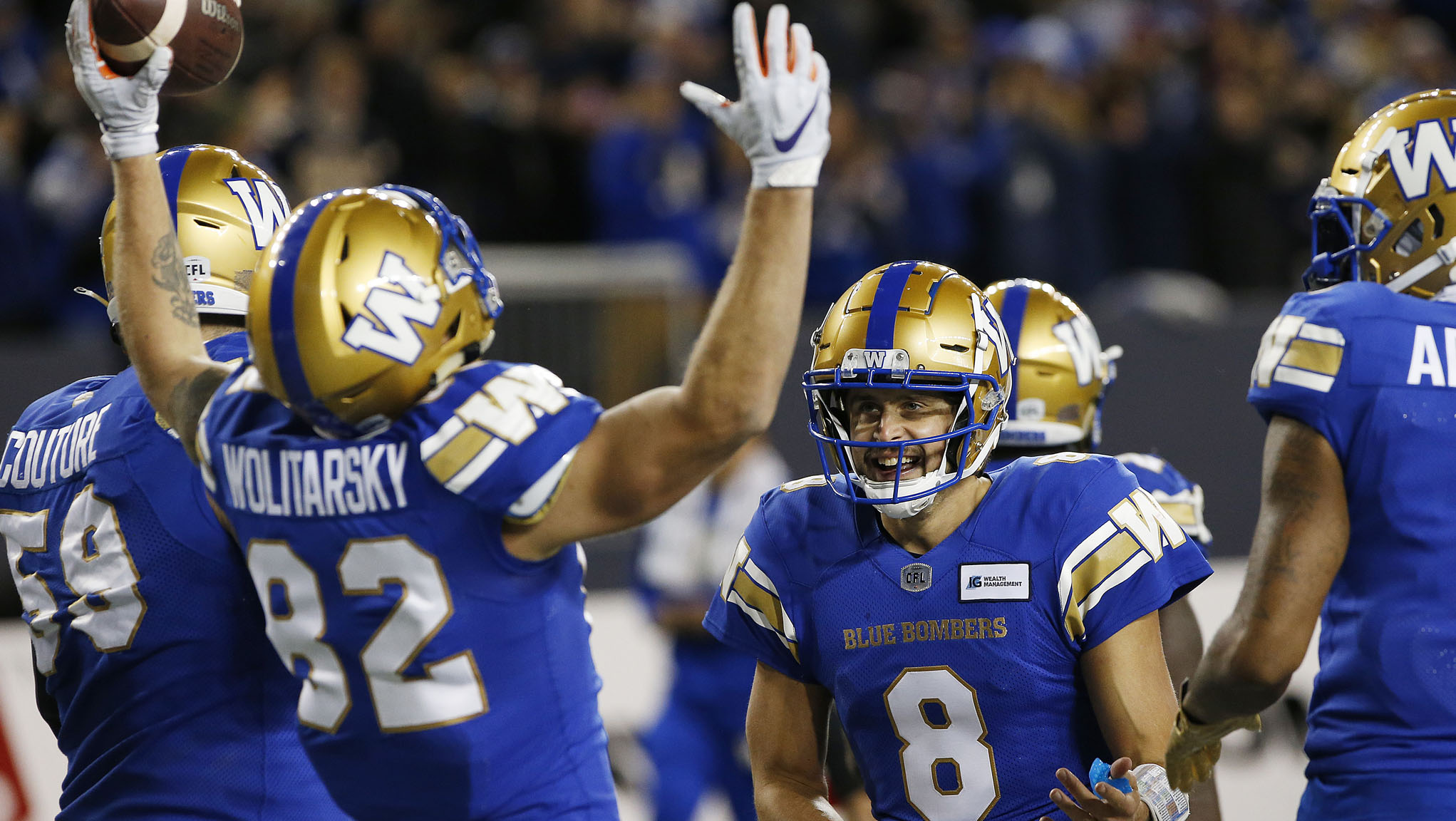 Collaros’ cool demeanour off the field spills into game day for the Bombers, who rolled through much of the 2021 season with No. 8 at the helm of their offence (Photo: The Canadian Press)

Where Zach goes people follow and with the right surroundings that natural leadership can guide your team to the top of the standings in short order. That said, Collaros is more than just a nice guy with a vibrant smile and a locker room mascot.

His game has matured much the same as the likes of Henry Burris, Ricky Ray and Anthony Calvillo. As those iconic CFL arms aged, they found savvier ways to attack and score points, which leads us to the tangible.

With 17 wins in 18 meaningful games played for Winnipeg, a Most Outstanding Player award, Grey Cup MVP, CFL All-Star nod and two Grey Cup rings in two playoff runs with the Bombers, it’s not hard to see the special hardware Collaros can physically hold in his hands these days.

The question for me was how?

How has Collaros become this evolved version of his former talented self and how is he so effective in Winnipeg? To answer this of course requires significant time breaking down film, pocket movement, throw placement and beyond, but in the interest of brevity I have pieced together four graphics which attempt to display how Collaros’ aerial assault has become nothing short of elite.

I examined attempts, completion percentage, accuracy grade and production grade for each 2021 Collaros throw (charts on the left) then compared it to the same metrics CFL average in 2021 (charts on the right) to understand where Collaros rises above the competition.

With a powerful screen game, especially to any of Winnipeg’s talented Canadian running backs, it isn’t shocking to see Collaros’ 0-10 yard attempt percentage above league average. What stood out to me is the 30-40 yard depth of target where he targeted 2.49 per cent more than the CFL average. More on the deep ball below as we look at completion percentages.

Completing passes above league average in the four most-targeted depths is always going to result in offensive success, but it’s the sizeable difference at 20-30 and 30-40 yards that really drives home how offensive coordinator Buck Pierce’s first full season as the guiding light of Collaros’ eyes shifted downfield, with great success.

No other quarterback had increasing completion percentages as targets got deeper to this rate in 2021, which leads us to accuracy grade.

Naturally as depth of target increases accuracy grade decreases, because hitting a receiver in stride from 25-yards is much harder than from five yards. Once again Collaros defies the odds from 20-30 yards depth, where his accuracy grade jumps from being above CFL average to elite, resulting in some jaw-dropping production grades at those deeper depths.

The completion percentage created by above average accuracy on deep throws lead to exceptional deep ball production from Collaros, in an offence where he wasn’t relentlessly forcing the ball downfield against all odds. Zach’s attack is characterized by control, timing and a killer instinct of knowing when to strike with the backbreaking completion, which opens the Bombers’ offensive flood gates.

With No. 8 back in Blue and Gold for another season expect much of the same, as Winnipeg dreams of the unthinkable: A Bombers’ three-peat, culminating with a victory in their bitter rival Saskatchewan’s barn.

When Zach Collaros is your quarterback, never say never.