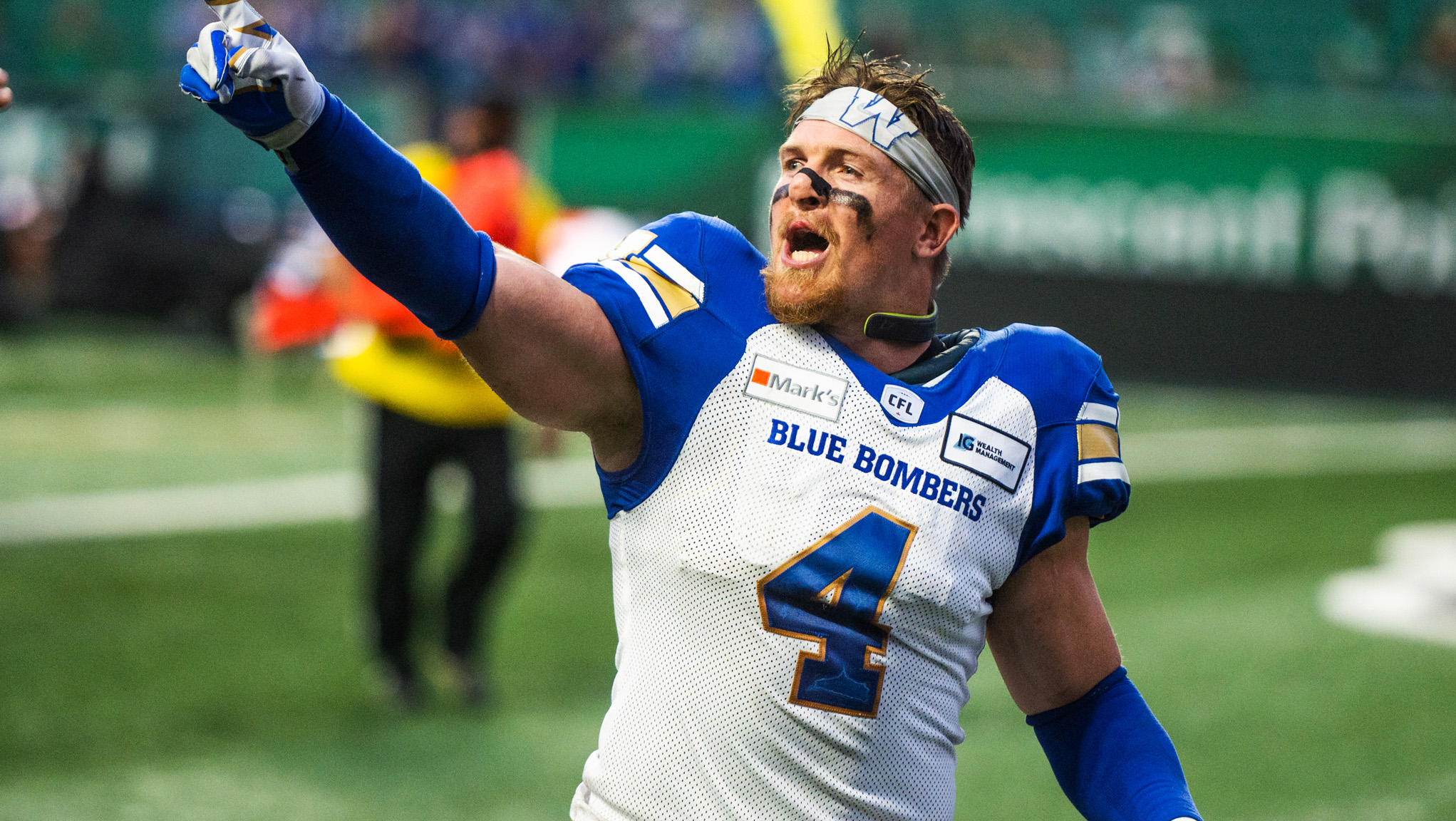 The good folks at the Canadian Football Hall of Fame likely haven’t started sculpting the bust for Adam Bighill just yet, but they are undoubtedly planning room for it.

Bighill — who officially put his name on one-year contract extension with the Winnipeg Blue Bombers on Thursday — will have a spot in the hallowed shrine someday, and still has years left to build on a legacy that has already seen him saluted as the league’s Most Outstanding Defensive Player three times and be named to the CFL All-Star Team six times.

It’s a legacy that goes so much beyond all the tackles, sacks, and interceptions he’s piled up in a nine-year CFL career, the last three with the Blue Bombers.

The 33-year-old product of Montesano, WA is a full-time Winnipegger now, having built a home here – literally and figuratively — with his wife and family while growing his many off-the-field ventures, including a career in the financial planning industry.

All of those things, and more, led him to re-sign rather than testing CFL free agency. Bighill listed the important decision-swaying factors as playing for a great organization, doing what’s best for his family and his career, and his love of his teammates in the Blue Bombers locker room.

“There’s always the feeling of comfort and knowing what to expect,” he said Thursday in a media conference call. “I mentioned all the great things, but there’s also the comfort of knowing how green your grass is as opposed to looking elsewhere. There’s that sense of comfort knowing you don’t have to adapt and adjust and go through a different process of acclimating somewhere else.

“We love being in Winnipeg, we’ve loved it since we’ve been here. All those factors tie in. As you guys know, I’m building a business here based out of Winnipeg… I have clients across the country from B.C. to Ontario, but Winnipeg is the base of my business and so that’s another factor as well.”

Bighill said he told his agent Dan Vertlieb of his priorities and what it would take for him to leave Winnipeg before contract discussions with the club began to get to the number-crunching stage. He conceded that he didn’t feel he maximized his potential value – a point that wouldn’t have been confirmed unless he had tested the market – but, again, his decision is just as much about quality of life as the numbers on a contract.

“For me, it’s not always about maximizing my value in the open market,” he said. “There’s a lot more that goes into it for me that I’ve already mentioned with the reasons why I chose to come back and the factors for me coming back.

“I do like being in Winnipeg. I love the fan base. I love the community. I love being a big part of this franchise. And so, maximizing value… I put a lot of value into those items is what I’m saying as opposed to contract dollars in some respect.

“So, no, I didn’t maximize my value, but I didn’t feel the need that I wanted to.” 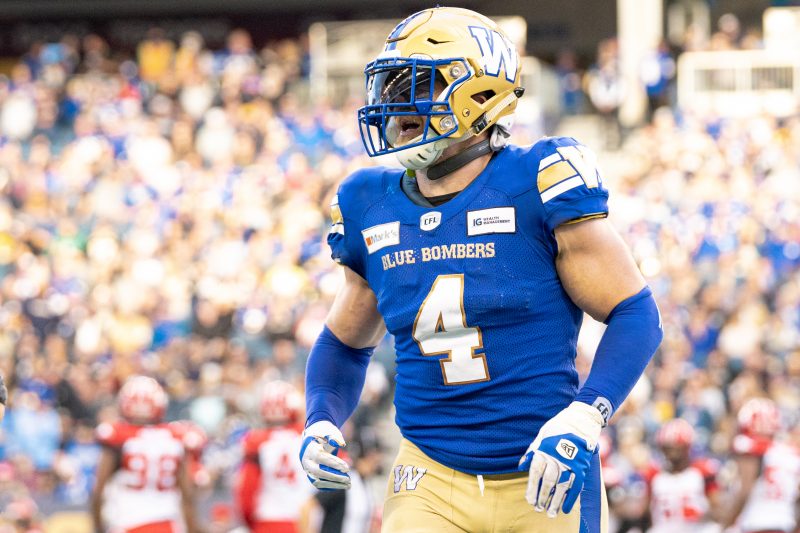 Bighill arrived in Winnipeg in May of 2018, just before training camp, and made an immediate impact on a club that had already begun taking the steps from contender to champion.

He’s a difference-maker on the field and a respected leader off it. In fact, it’s his legendary work ethic – coupled with his decision to live here year-round – which has made him such an important component in the club’s celebrated ‘culture.’

All of this leads to what will ultimately be a slam-dunk decision to enshrine him in the hall of fame. On top of all that, his status as a leader was only further enhanced by what unfolded in 2020-2021 for the veteran middle linebacker.

Bighill took a massive pay cut after the CFL’s lost season in ’20 – reports had it pegged as the biggest in the league – and yet he did not publicly criticize the cut, nor mope about the facility at any point over those two years. In fact, the cut only fuelled him further and in many ways, in so doing he was helping protect the team-first culture he had helped grow.

“If I’m the leader and I’m whining and bitching and I’m not doing the things I was before, as far as leading the extra meetings and being the main communicator between the front and the back end, just doing all the extra work that I do, if I wasn’t doing that I don’t feel like I could be the leader I need to be and I don’t feel like the culture would be where it needs to be,” he said. “And I don’t have the stomach to not do it.

“… When I show up, every practice, every meeting, I do it to the best of how I know it should be done, regardless of if I’m being paid or not. Because when I do something, I do it 100%. I don’t half do it.

“I think that’s why Winnipeg continues to respect me. Obviously for my play, but also for the things I do off the field, in the locker-room, in the classroom, in the meeting room. That is important, and it’s a huge part of the culture.”

Bighill led the Blue Bombers in tackles in 2021 with 70, adding two quarterback sacks, two interceptions, and two fumble recoveries – one for a touchdown. He was busy in the playoffs, too, registering eight tackles in the Western Final and another five in the 108th Grey Cup.

Inside those numbers was the way he was utilized in defensive coordinator Richie Hall’s defence, as he lined up at middle linebacker and was moved all over the front six, while also occasionally dropping back to play safety.

He’s playing arguably the best football of his career at age 33, and still feels he’s got more to give, more to accomplish.

“What is there left for me to accomplish is winning another Grey Cup and going three in a row,” Bighill said. “(And) continue to display that I’m one of the best linebackers to ever play this game; continue to lead and make memories with my teammates. That’s something that I still want to do. And that’s not public for anybody else to quantify the accomplishment, but that’s something that still is important to me as what I want to do with my legacy, is to still be able to impact those around me. That’s something I put a lot of value on.”