Cauz: My top free agent moves of the past 13 years 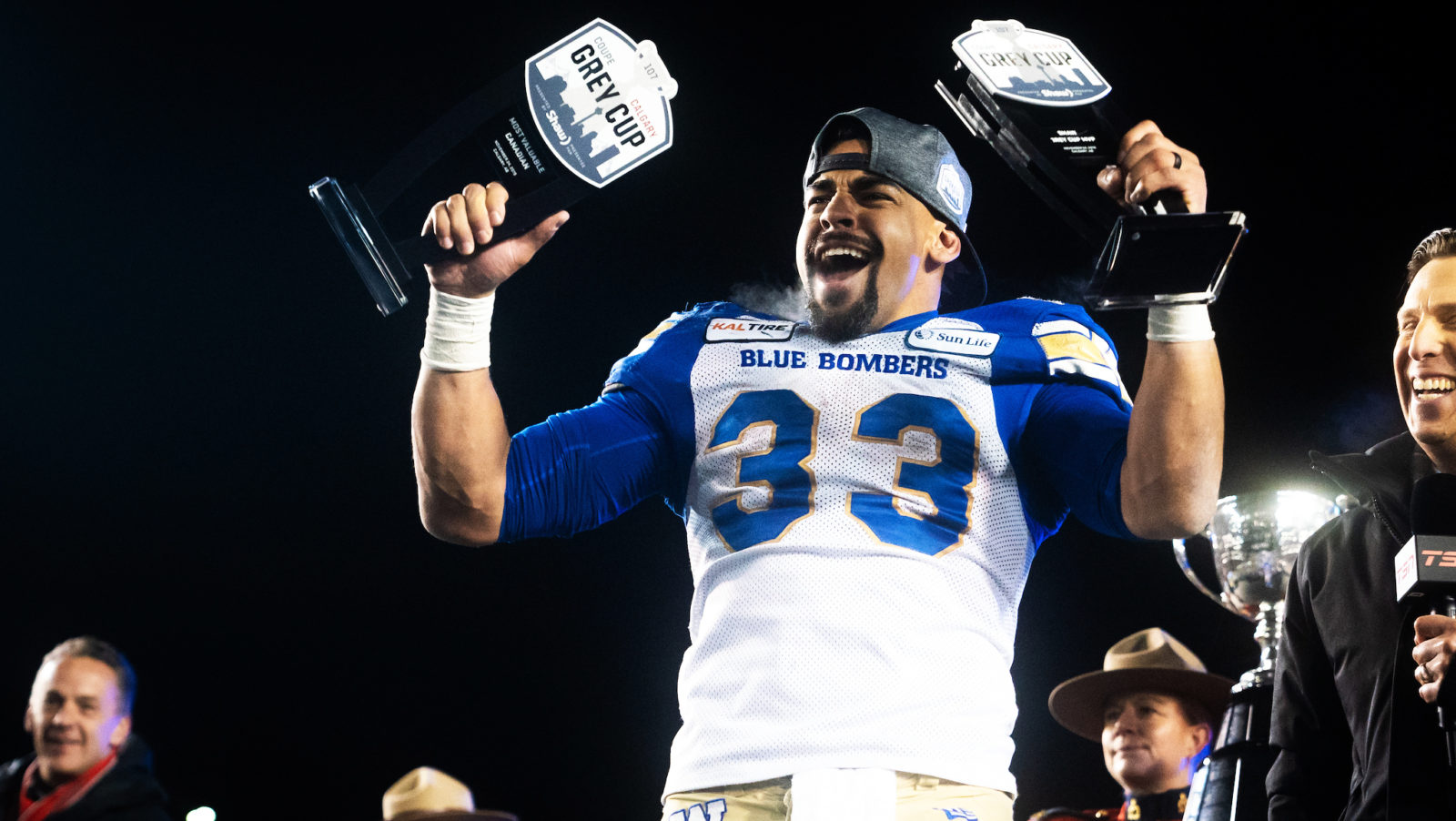 Cauz: My top free agent moves of the past 13 years

We are less than a week away from the official kickoff of the 2022 CFL Free Agency season! Like the rest of you I am constantly checking the Free Agent Tracker while scrutinizing the list of Top-30 free agents.

If this was back in the 1990s the top name on that list would have been Doug Flutie any year he was an impending free agent. Not only would he be No. 1 but there would be a Ted Laurent-sized gap between the hall of fame passer and whoever was the second name on the list. That got me thinking about who the greatest free agent signings in CFL history are. Which players have had the most significant impact on their new team? For this list I am going back through the Post-Flutie era, say the last 12 years or so.

Some quick rules: I am not including free agents that re-signed with their last team or players that had yet to play a game in the CFL. All the players for this article jumped ship from one team to another.
I’d like to say I chose to do a top-11 list to be different but the truth is I just miscounted and I refuse to edit this down. 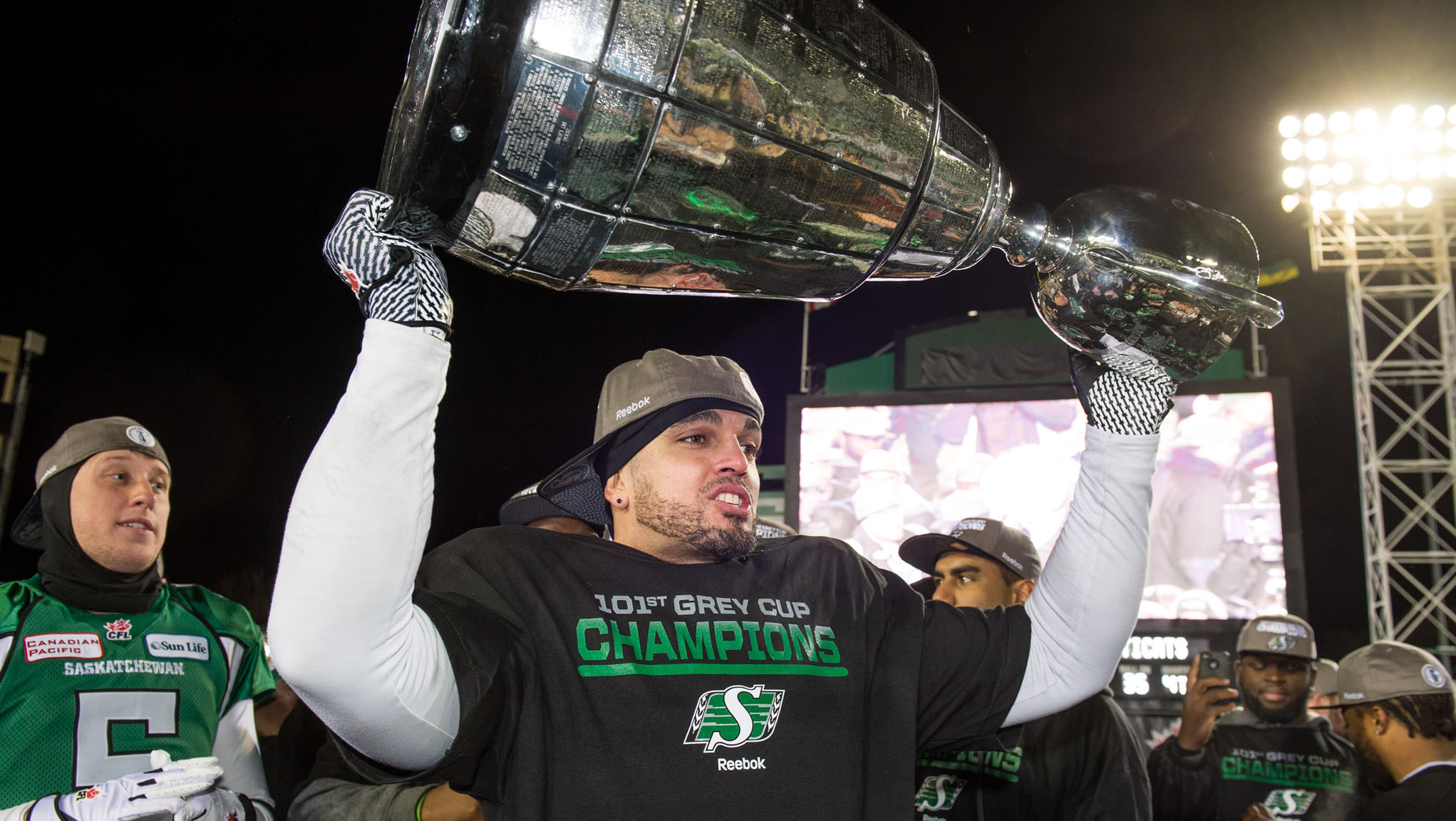 It was a short but successful stay in Saskatchewan for Ricky Foley, as he helped the Riders to a 2013 Grey Cup win on home soil at Mosaic Stadium (Matt Smith/CFL.ca)

Ricky only spent two seasons along the Roughriders defensive line but to quote ‘Trooper’ Ricky was there for a good time not a long time. In his first year he finished with eight sacks, collected a career high four fumbles and won the Grey Cup. In his next Foley won Most Outstanding Canadian award after putting up 12 sacks.

Wow, it feels like ages since I’ve written about Lewis! His 753 yards was not a spectacular number in 2015, good for 19th overall but remember Lewis was not exactly playing with elite level quarterbacks between Rakeem Cato and Jonathon Crompton. The next year, Lewis went over the 1,000-yard plateau playing with Cato and a very young Vernon Adams. His final year saw him surpass Geroy Simon for the all-time leader in receptions.

In late October in his initial year with the REDBLACKS, Spencer set a CFL single-game record with 496 all-purpose yards, including 133 receiving. Spencer was twice named an all-star for his work as a returner and had over 1,000 yards in 2018.

The former Mayor of Swaggerville had a solid career with Edmonton, putting up 46 sacks in five seasons in Green and Gold. He earned his second CFL all-star award in his second season with the Elks after 13 quarterback takedowns. 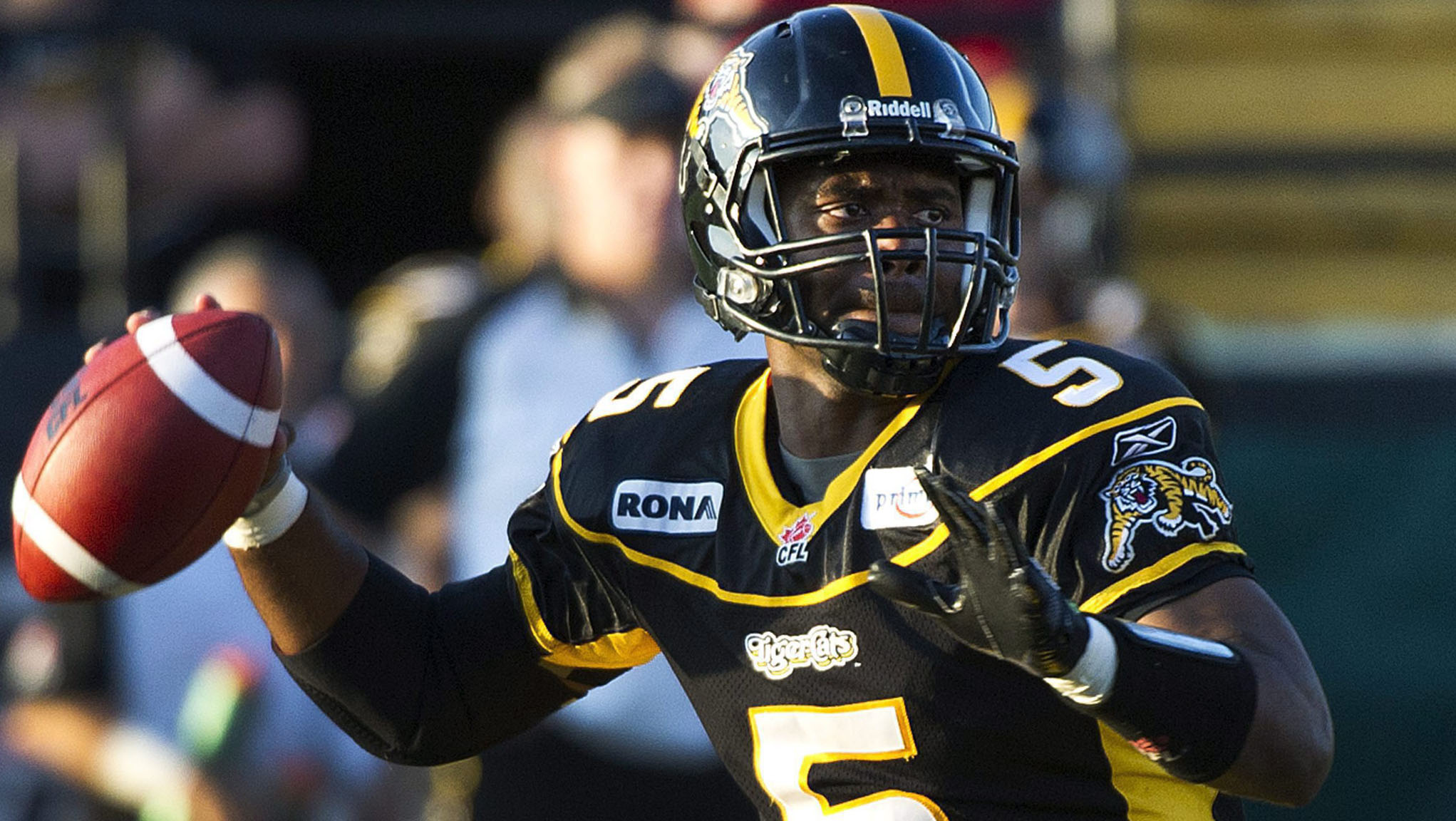 Through just three seasons in Hamilton, Kevin Glenn threw for over 12,000 yards, after coming in initially as the team’s backup (The Canadian Press)

Glenn never led the Tiger-Cats deep in the playoffs, but wow did he overperform, considering he was originally brought in to backup Quinton Porter. In his three years in Hamilton, Glenn tossed 70 touchdowns compared to 41 interceptions and in 2010 he set career highs in both passing yards (5,106) and touchdown passes (33).

Justin was critical to the Bombers 2019 Grey Cup win by tying a CFL record with six made field goals. His first year saw him set a career high in both field goals made (60) and attempted (68) as Medlock was named the West Division nominee for Special Teams Player of the Year. During his four years in Winnipeg, Medlock could always be counted on for a deep punt and an accurate kick.

Don’t worry offensive linemen, I have not forgotten about you. Steady and often spectacular, LaBatte was a constant on the Western all-star team roster, making it his first year in Regina and just about every season during his eight-years with the Riders.

Adams put together a solid “rookie” year with the Bombers in 2015, with 839 yards and six touchdowns. His production would only go up as he topped 1,000 yards in 2017 and 2018. You can argue Winnipeg never gets a chance to win the 2019 Grey Cup if not for Adams’ playoff run as he totaled 198 yards in playoff wins over Calgary and Saskatchewan. Adams would continue his post-season heroics in 2021, nabbing the eventual game winning touchdown pass against Hamilton.

Listen, no one likes someone who just plays the results to say “I told you so” but how did Calgary not find a way to keep Sinopoli after the 2014 season? To be fair it speaks more to the depth Calgary had at the time at receiver, but the moment Sinopoli was given a chance to be a key piece in a passing offence he took off.

In his first years in the league, Sinopoli had a grand total of 614 yards but under Rick Campbell in Ottawa, he put up four straight 1,000-yard seasons. His best year, 2018 saw Sinopoli set a CFL single-season record with 116 receptions. The next highest total that year was Brandon Banks, with 94. Sinopoli’s resume with Ottawa includes three all-star teams, twice winning the Most Outstanding Canadian award and in 2016 he was named the Most Valuable Canadian in the 104th Grey Cup, finishing with six receptions for 94 yards and one score. 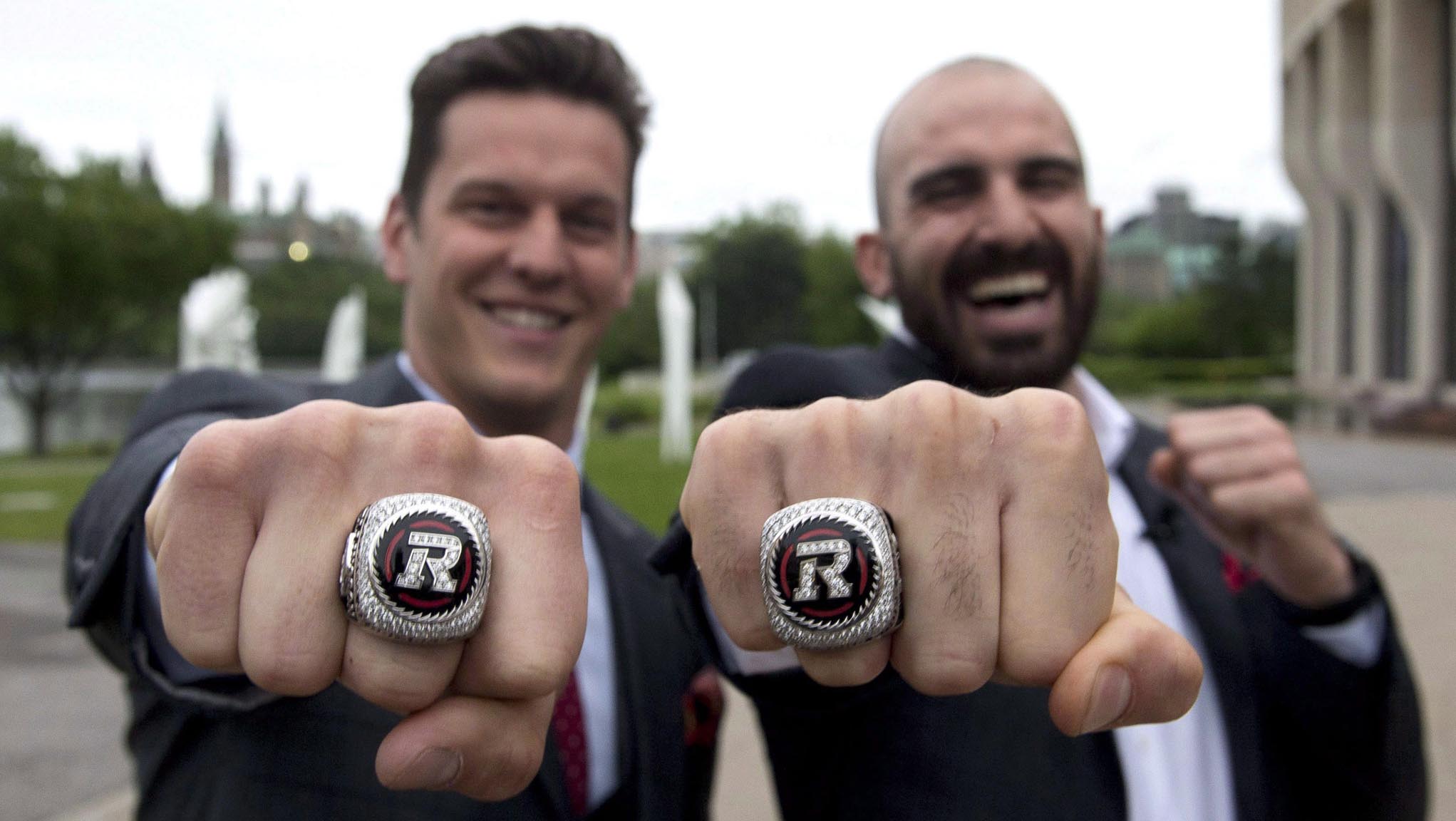 Did any team have a better free agency year than Ottawa in 2015?? Ellingson’s REDBLACKS career includes 1,000-plus-yard seasons for all four of his years there. It’s impossible to forget his massive day in the 2015 Eastern Final when he put up 186 yards and one huge touchdown in Ottawa’s 35-28 win over Hamilton.

His best individual season came in 2017 when he led the league in touchdown catches (12) and his 1,459 receiving yards placed him third overall. Once again, I can’t help but wonder how Hamilton let him go in 2014 and yes, I know hindsight is 20/20 so it’s easy for me to play armchair general manager, but wow! Just like with Sinopoli, it’s crazy just how good a player like Ellingson can be when given a chance.

The granddaddy of all CFL free agents since Doug Flutie! After three excellent years with the BC Lions, Kyle Walters and the Bombers signed their hometown running back. His career with Winnipeg has included multiple seasons leading the league in rushing while also being the preeminent receiving back as well.

In 2019 he broke Ben Cahoon’s record for yards from scrimmage by a Canadian. His crowning achievement was of course his 18-carry, 134-rushing-yard day in the 2019 Grey Cup, as he became the first ever player in Grey Cup history to win Most Valuable Player and Most Valuable Canadian. While his production was down at this past Grey Cup, he did help his squad get to the final game with 136 yards on the ground and a touchdown in their Western Divisional win over the Roughriders.