Harris opens up on ’21 season, departure from Bombers

Harris opens up on ’21 season, departure from Bombers

Through his 11-year CFL career, Andrew Harris has seen his share of ups and downs. The 34-year-old star running back has never had a week like this one.

Somewhere in his five-year stay with the Winnipeg Blue Bombers, where he was the key cog in the team’s climb to the top of the CFL mountain, Harris reached a point where he couldn’t see himself playing anywhere else. On the heels of the Bombers’ back-to-back Grey Cup wins, Harris’ contract was up but he figured that would be sorted out and he’d carry on with his hometown team to finish out one of the greatest careers this league has ever seen from a Canadian or American player.

Then this week hit and Harris’ professional life got flipped upside down. Talks fizzled with the Bombers, who had already brought back Harris’ backups, Brady Oliveira and Johnny Augustine. The free agent market opened at noon on Tuesday and Harris was suddenly a part of it. 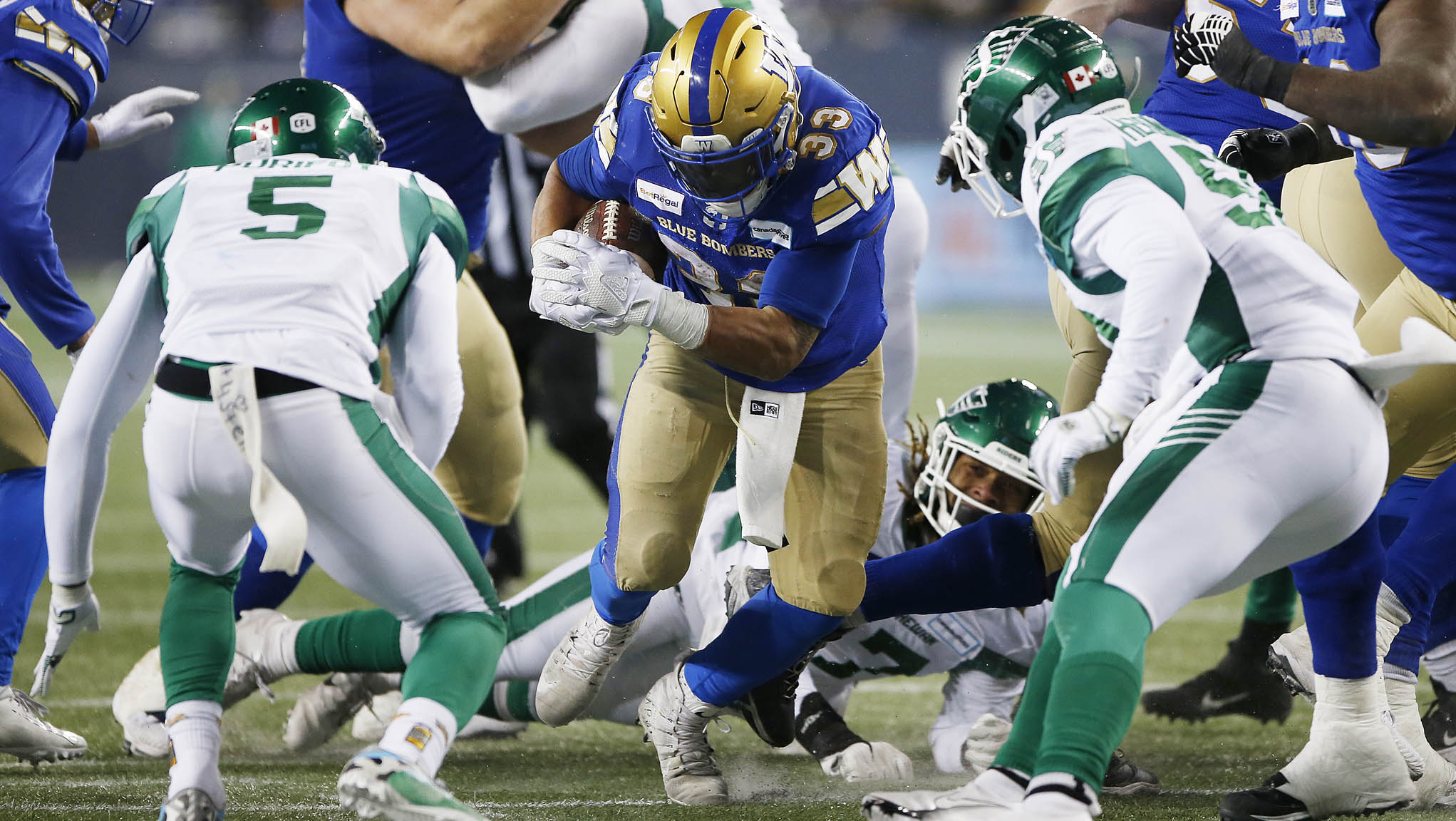 Injuries limited Harris to seven regular-season games last year, but when he was on the field he was dominant, like when he put up 136 rushing yards in the Western Final (Photo: The Canadian Press)

“It’s definitely been a roller coaster,” Harris said on Thursday, the ride ending with him signing with the Toronto Argonauts on Tuesday.

“I think honestly, going to Toronto is the best opportunity for me right now. Not only just on the field, but off the field. I’m looking forward to all the great people that are there that are excited to have me. That’s the biggest thing: I’m going to a place that I feel wanted and they’re excited about it. That excites me and gets me going. I can let the dust settle here and take a deep breath. I’m really super excited about the opportunity and looking forward to it.”

That sense of disbelief that he’s not a Bomber is getting chipped away day by day. Thursday’s introductory press conference with the Argos certainly helped that. When he was off the phone with the Bombers and looking at the CFL landscape without them in it for him, Harris reached out to Pete Costanza, who had been the Bombers’ running backs coach last season and joined the Argos’ coaching staff this year to work as the receivers’ coach and pass game coordinator.

“The biggest thing is they’re excited about having me, there’s a want factor there,” Harris said.

“Just talking to Pinball on the phone, his little giggle, his excitement. I appreciate the charisma and the way…it felt very warm. I’d never talked to Pinball before. Obviously you hear lots of great stories but it just felt like the energies matched and our energies were on the same page.

“I’m looking forward to getting to know Pinball along with the rest of the coaching staff and just vibing with them and learning how they tick and how they work.” 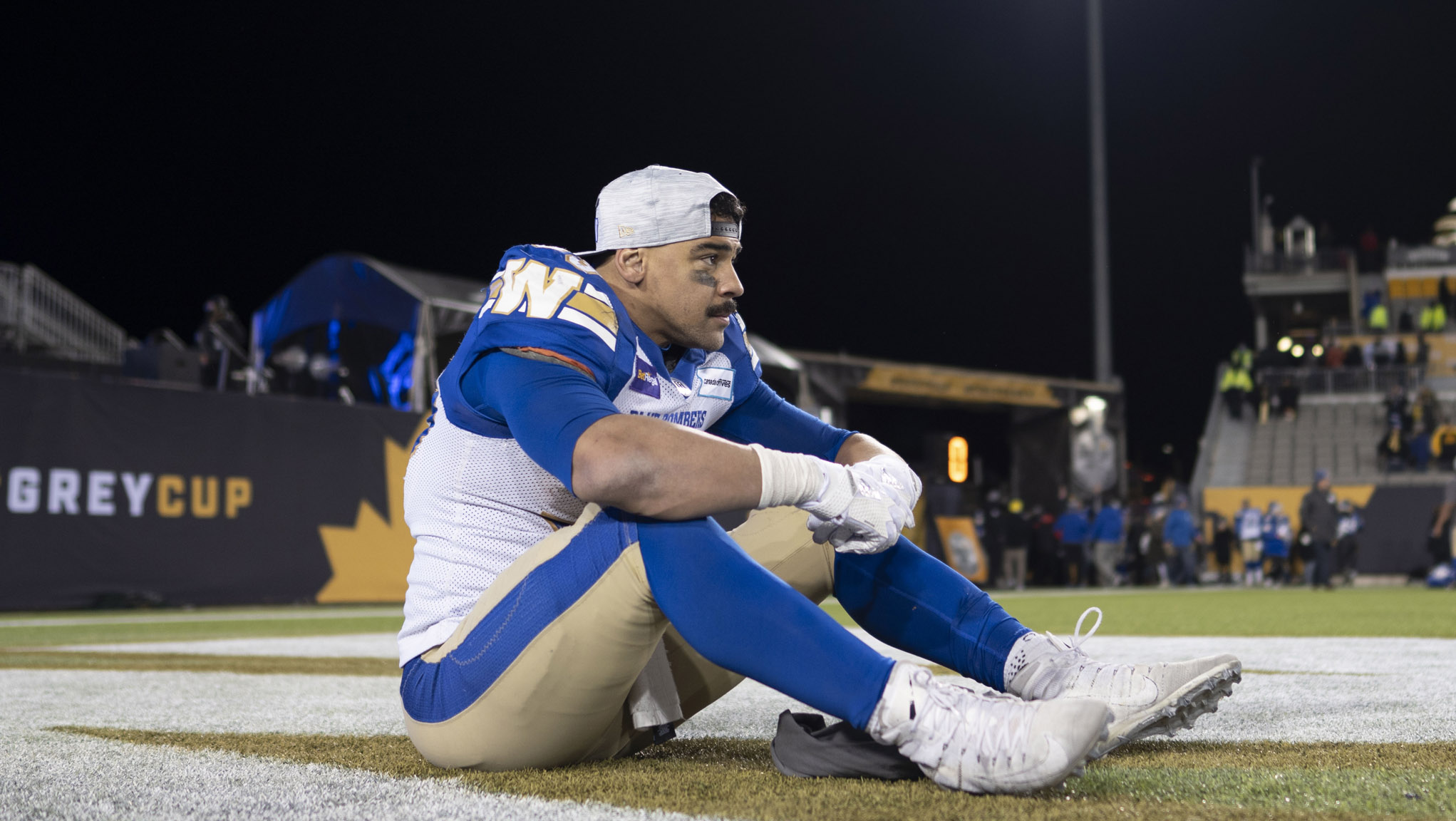 At the end of a trying 2021 season, Harris took a moment at Tim Hortons Field to take in the Bombers’ Grey Cup win (Geoff Robins/CFL.ca)

Harris is in the process that many of the league’s players are now, of thinking about where they want to live in a new city and about their fit with new coaches and teammates. On the call, he talked about the challenges of his 2021 season. The pandemic limited some of his training options and some personal matters — he separated from his wife and said he was still in the moving process when training camp opened in Winnipeg — weighed on him, leaving him short of where he’d have liked to have been physically.

He was injured in training camp and missed the first three games of the season. He played seven games and was hurt again in Week 11 against Edmonton and didn’t see the field until the playoffs. He looked like his usual, dominant self in the Western Final against Saskatchewan, rushing for 136 yards and a touchdown and added another 80 yards on the ground against Hamilton in the Grey Cup win.

After the Bombers became the first repeat champions since Montreal did it in 2009 and 2010, Harris sat on the turf at Tim Hortons Field in Hamilton and just took all of the struggle in.

“It was a tough year and a lot of roller coasters, a lot of ups and downs. I just don’t want that to ever happen to me again. It was really difficult. I don’t wish that on anyone,” he said.

“That’s ultimately what’s really inspiring me this year to make sure that I’m coming in with the best foot forward. And again, you can’t control some of those uncontrollable things and but I don’t want to have any regrets. And I think last year, I had some regret.”

Harris will enter into the 2022 season with plenty of motivation in front of him. He’ll no doubt want to show the Bombers what they let go of. Harris is just 339 yards shy of the 10,000-yard rushing mark in his career. He’s a three-time Grey Cup champion and a five-time CFL all-star, with a list of career accolades that could make up an article of their own. He joins an Argos team that was one win away from playing for a Grey Cup and his presence in the Argos’ offence could be a game changer for Dinwiddie and McLeod Bethel-Thompson.

With the wound still raw for Harris, it was pointed out to him that the Argos don’t travel to Winnipeg this year. The only time that Harris will go up against his former team is in Week 4 at BMO Field.

“Honestly, it probably would have been a tough game for me to be back in that building wearing other colours,” he said. “Maybe it’s a little bit of a blessing that that’s not happening.”