Landry: Saadia Ashraf is a true builder of the game 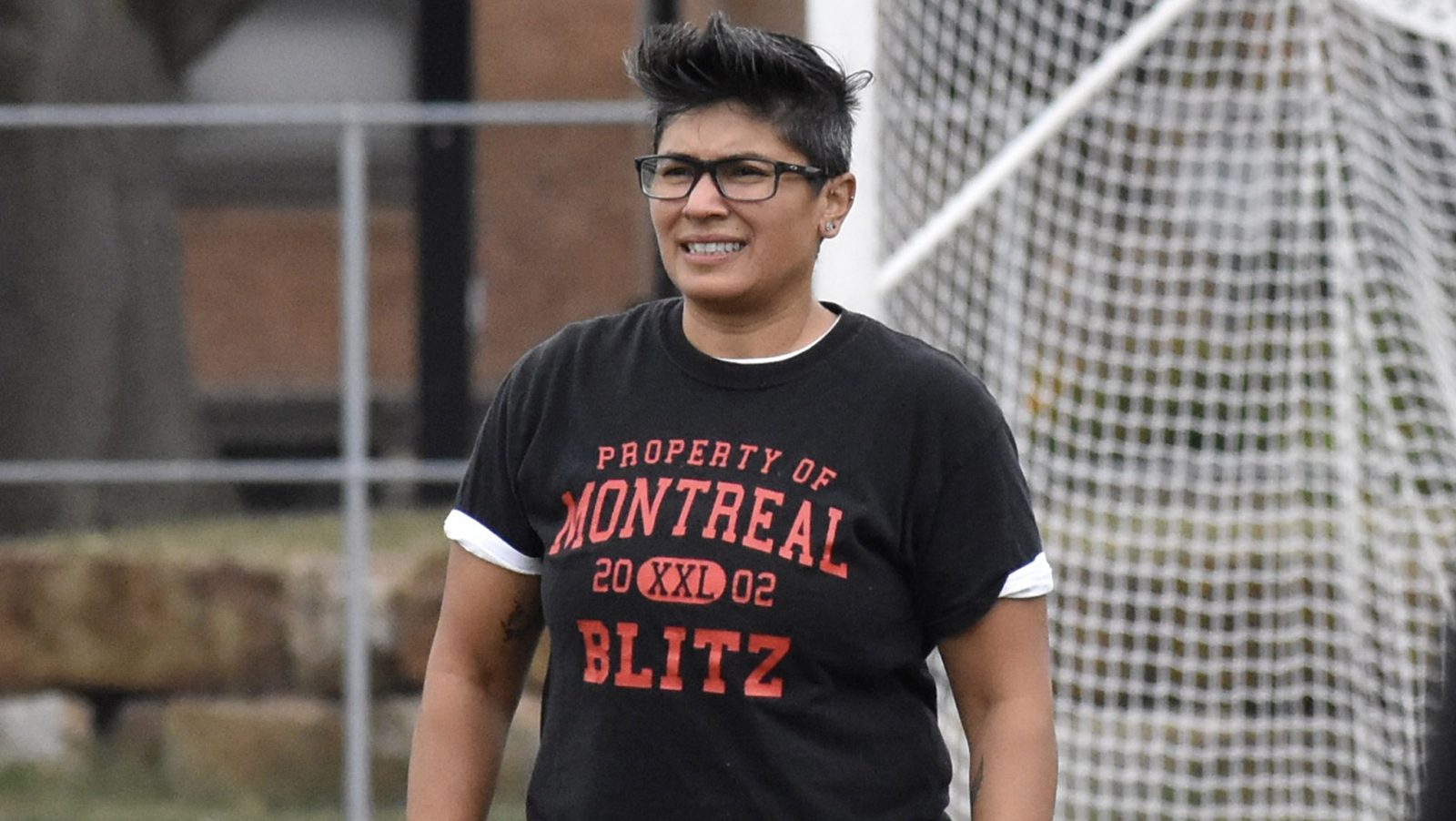 Landry: Saadia Ashraf is a true builder of the game

Saadia Ashraf’s love of football is plainly evident and has been for many years now. The proof is in the pudding and the main ingredients of that pudding have been dedication, determination and hard work.

Even if you didn’t know about all that, you’d pick up on her passion in a second. It’s obvious in the tone of her voice when she answers a question about being invited to assist in putting players through their paces at Friday’s Eastern Regional Combine, in Montreal.

“I’m not going to say no to that, for sure,” says Ashraf, obviously energized by the opportunity. “I’m still learning.”

The head coach of the Montreal Blitz of the new Central Canadian Women’s Football League (CCWFL) can’t seem to wait to add to her store of football knowledge, one that is already impressive, having been built over two decades of playing, coaching, owning and managing, most all of that with the Blitz.

Ashraf is a builder of the sport, a trailblazer. For her, a football life is a labour of love. It has to be. Otherwise, how could she possibly find the time?

She’s a teacher at St. Thomas High School, in Point-Claire, QC, a municipality located on the island of Montreal. Her teaching career goes back two decades and that means Ashraf has had to balance football with a full-time job ever since she began her affiliation with the Blitz, first as its starting quarterback then as…well, just about everything else, too.

In 2004, Ashraf bought the Blitz, a team that was born three years earlier. She’d joined the Montreal roster prior to her purchase and after she’d made her way back and forth across the border for a spell, playing with a team in Rochester, N.Y., called the Galaxy.

RELATED
» Learn more about Diversity Is Strength Conversations
» Steinberg’s MMQB: A landscape changing for the better
» O’Leary: Tanya Walter breaks through with Lions

While continuing to play, Ashraf took on a bevy of off-field jobs and challenges as the team’s owner, manager and chief administrator over the next decade. “Sounds glamorous to own a football team,” she jokes, referencing the relentless hustle and hard work that went into breathing life into the Blitz.

The early days were very hard, with not much assistance coming. Ashraf’s dedication and determination would be valuable.

“When we first started with Blitz, you know, I’ll be blunt,” she says.

“There wasn’t a lot of support from our provincial association. It’s kind of like, ‘Do your own thing. It’s okay, whatever.’”

“I was managing, or I’d get other people to manage,” Ashraf says of her ownership years. “But I’d kind of oversee everything. A lot of players were involved. I had a good team around me and I learned, over the years, to delegate.”

(Fun fact: Among those Ashraf delegated to was Blitz receiver Georgina Paull, whom Ashraf says did stellar work in fundraising for the team. Paull’s name is probably familiar to you, even if you aren’t a follower of the Montreal Blitz. That’s because she’s an official, too. In 2019, Paull and Emily Clark became the first female officials to work a CFL game, when they joined the crew for a pre-season match-up between Calgary and Saskatchewan. It’s also worth noting that Paull recommended Ashraf for this story as someone that could continue to blaze a trail for women in football in Canada.)

“My role has evolved over the years,” explains Ashraf and indeed, it has. She retired as the team’s quarterback in 2014, after helping lead the Blitz to four Independent Women’s Football League (the league the Blitz played in between 2001 and 2016) championships and a Canadian national championship (2012). Twice she quarterbacked Canada’s team at World Championships, in 2010 and 2013.

After retirement, she remained in a managing and administrative role with the Blitz for another year, before deciding to focus more on developing the skills of the players, spending time as both a receivers coach and, naturally, a quarterbacks coach. In 2015, Ashraf began methodically shifting her ownership stake into the hands of a non-profit group. That transfer, she says, is pretty much complete and the Blitz is now managed by Andreanne Dupont-Parent, who also serves as the CCWFL’s commissioner. 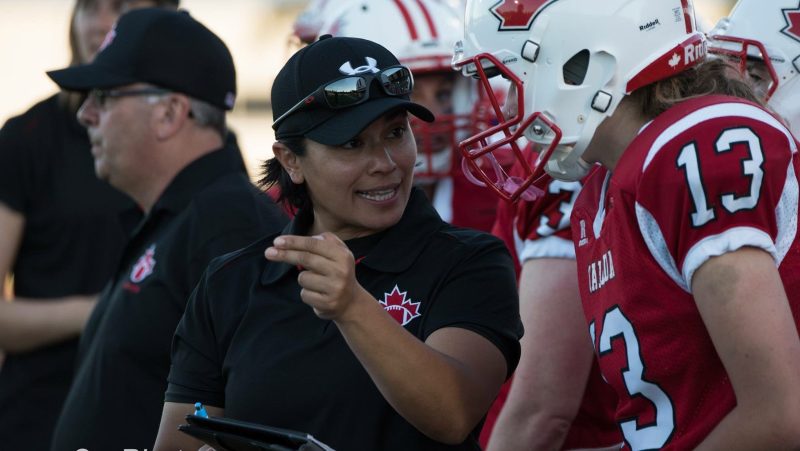 Seen here working as a quarterbacks coach for Team Canada in 2017, Ashraf has dedicated her life to playing, coaching and administration work to help grow women’s football in this country (Supplied, Saadia Ashraf)

Ashraf enjoys coaching, finding satisfaction in teaching young players the skills and techniques necessary to be successful on the field. In addition to coaching the Blitz, Ashraf will serve as quarterbacks coach for Team Canada at the 2022 International Federation of American Football World Championship, being held in Vantaa, Finland, at the end of July. It’s something she has done previously, helping Canada earn a silver medal at the 2017 World Championship, held in Langley, BC

Prior to that, the hard work that has been crucial over the years continues today, as the Blitz gets set to get back on the field for the 2022 season. It’s been a while for the team; its previous two seasons were cancelled due to the pandemic. Montreal will play its season-opener against the Quebec City Phoenix, May 14 at the Blitz’s home field in Lachine, in Montreal’s west end.

That pandemic pause in the action didn’t help the growth of women’s tackle football in Canada, understandably. Still, Ashraf says, the desire to grow the game continues even if in her eyes the pace of that growth might sometimes test one’s patience.

“I know you can’t rush things,” she says, “but I don’t think it’s moved as fast as we would have liked it to. Has it grown in terms of interest around the country? Yes. Has it been gaining? Not fast enough.”

Some of the challenges of her early days as an owner/player persist almost 20 years later and Ashraf knows those challenges well. There is a reliance on volunteer coaches and when it comes to players, being paid to play remains a goal, not a reality.

“Things don’t move without money,” Ashraf says, adding that her pitch to players can only go so far, presently. “OK, we’re going to give you some gear and pay your travel expenses,” she says.

Over the years and in the many roles she’s played with the Blitz, Ashraf has undoubtedly piled up an immense amount of knowledge, from how to play the game to how to coach others to do the same. That’s not to mention the vast experience she has accrued in all of the ownership and administrative juggling she’s had to master in order to keep the Montreal Blitz on the football scene.

Still, Ashraf is hungry for more and that is why the invitation to help oversee the regional combine is so important to her. As well, there has been discussion with the Montreal Alouettes about the possibility of Ashraf coming to their training camp to gain even more experience, trade more ideas. She is hopeful, eager for that opportunity.

Ashraf will help run quarterback drills at Friday’s combine and that is only natural. As a former pivot herself, she’ll probably have some advice to give. As a manager and talent developer, she can’t wait to glean all that she can.

“I’m really looking forward to seeing how a professional combine is run,” she says. “I really want to listen to what coaches have to say. I want to soak everything in, as much as I can.”

Saadia Ashraf has spent years soaking in what she can, while giving her all to build women’s tackle football.

With a busy spring and summer ahead, her labour of love continues.

TWO MORE TO KEEP AN EYE ON

Last month, Tanya Walter made history as the first female coach to be hired in a full-time capacity by a CFL club. With that in mind, CFL.ca reached out to Walter and some other groundbreaking women in and around the CFL (officials Emily Clarke and Georgina Paull, who as mentioned above as suggestion Ashraf for this piece) for their opinion on who else may be able to find a space in the game that hasn’t historically been there for them. Here’s who they see as next.

I think the next woman to find a spot in CFL football is Shaylee Foord. I’ve had the opportunity to play with Shaylee on the Edmonton Storm, as well as working alongside her at Free Play for Kids. This past year Shaylee made a huge step in her football journey by becoming a football official with the Edmonton Football Officials Association.

I have heard nothing but incredible feedback about Shaylee’s abilities and talent as an official, which was shown through her being presented with the EFOA Rookie Official of the Year award in 2021.

Additionally, Shaylee has worked stick crew for some of Alberta’s highest stakes high school football games, as well as a handful with the CFL. With playing, coaching and now officiating in her repertoire and a vast skill set, Shaylee no doubt has many avenues she can choose to peruse in the football community, all of which she has the ability to be incredibly successful at.

Shaylee not only embodies the traits and skills needed to cut it in the football industry, but some very unique skill sets and knowledge. Her awareness of limitations within our social structures and the systemic problems within our communities and country, provide powerful insight into the ability to grow the game. Her awareness in these spaces could contribute to increased accessibility and opportunities for those who are not traditionally part of these spaces.

I am incredibly proud to see Shaylee’s growth in football to date, and am grateful to have been a part of it. I am looking forward to seeing her contributions to the football community.

I was introduced to Elisha Torraville in September of 2020 when she put together a girls’ football camp in Calgary. She hosted the camp with the intention of exposing girls not only to playing football, but to the many avenues that you can pursue in football aside from playing, like coaching, officiating and even as a member of the media.

To this end, she invited me to speak about my experience as an official and also had Alanna Nolan from Stamps TV talk to the girls as well. Since that first camp, Elisha has organized a second camp in September of 2021, and she is now spearheading the first-ever girls’ only tackle football league for girls ages 13-17 in Calgary and the surrounding area.

In addition to the initiatives that Elisha has started, she also plays for the Calgary Rage and is training hard to try to make Team Canada for the upcoming world championships, and she has taken on a coaching position with the Alberta U18 girls’ provincial team. Oh, and she is on the board of directors for the Calgary Bantam Football Association, which has provided huge support for the new girls’ league.

I’m not sure if Elisha has her sights set on a specific role or career in football, but is really clear that she wants women to be visible in football.”