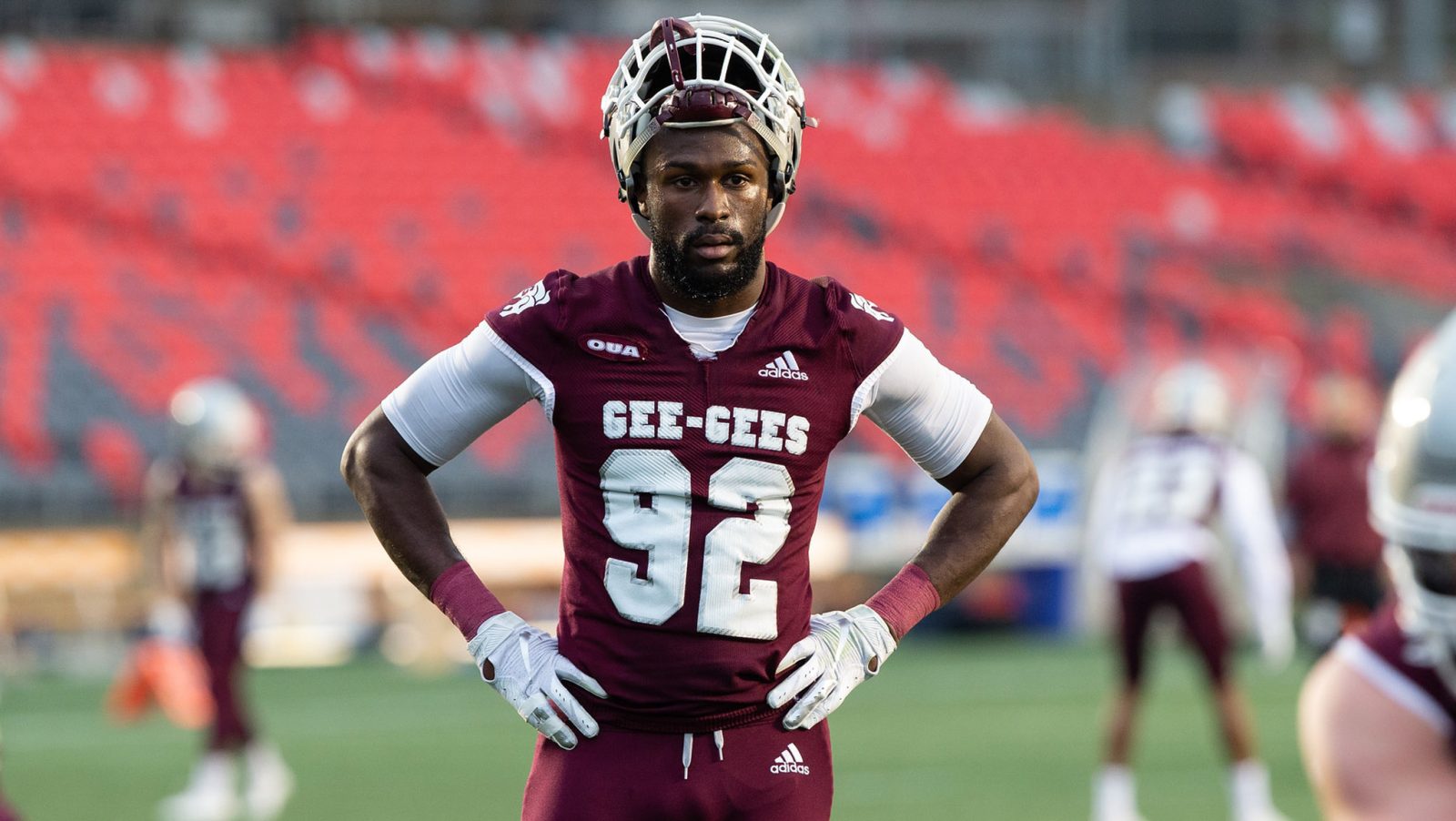 If you ask him, Frednick Eveillard won’t pretend that he’s something he was not. That self-awareness, along with a willingness to try to be something completely different, has led him to a place of promise and the possibility of a career he hadn’t been banking on.

“I won’t lie to you,” says the draft-eligible prospect out of the University of Ottawa. “I wasn’t a big, big player as a receiver.”

The 25-year-old tried for years to make it as a pass-catcher, first in high school, then in his post-high school career, including his first three years as a seldom-used player with the Gee Gees. Wasn’t going to happen, though.

But that reality — as well as his coaches’ vision that he might just be right for a totally different position — has led Eveillard to jumpstarting his personal gridiron expectations and thinking of a career in pro football after all.

He’s no longer a receiver. He’s a prospect at defensive end, believe it or not.

Eveillard is one of six players that made it through the Eastern Regional Combine last week, earning a chance to further bolster his status for the upcoming draft, at the National Combine presented by New Era, in Toronto, from March 25-27.

“I’m feeling good about it,” says Eveillard of his performance at the regional combine, held in Baie-D’urfé, on the west side of the Island of Montreal. “But I know my job isn’t done.”

Eveillard was born in Haiti, but grew up in Gatineau, QC, turning his attention to football at the age of 15, while he was attending École Secondaire Mont-Bleu. He continued trying to sharpen his receiver skills when he attended Cégep de l’Outaouais after leaving high school and when he landed at the University of Ottawa in 2016, he was listed as a receiver with the Gee Gees though he did not see any action in his first year.

He admits he wasn’t what you’d term a glittering football prospect when he arrived in Ottawa. “I wasn’t developed yet,” he says. “It was when I came to university when I started developing my physical abilities like speed.”

In Season 2, Eveillard dressed for three games but saw little to no action and the exact same thing can be said for Season 3. His fourth season was proceeding precisely the same way, too, until injuries along the Gee Gees’ defensive line provided an opportunity for Eveillard to change his fortunes.

At the suggestion of defensive coordinator Jean-Vincent Posy-Audette, the Gee-Gees brain trust approached the little-used receiver and wondered if he’d like to try to take a whack at rushing the quarterback. At six-foot-four and 220 pounds and with explosive off-the-mark speed, Eveillard had at least the potential to be a rotational player and maybe a starter.

“The first thing I said is ‘Yes, I will, if the team needs me,’” recalls Eveillard. “And I think that was the best choice I ever made.

“I really love football and the first thing I thought was that I have nothing to lose to switch. But I really went day-by-day. I never pressured myself.”

Things changed, but not right away. In his fourth year, in 2019, Eveillard practiced hard and leaned in to try and learn how to be a good defensive end. He got excellent coaching he says, with Ottawa defensive line coach Craig Hodge playing a big role, naturally. His teammates were incredibly helpful, too, he says.

“I bonded real quick with the d-line group and the defence. The whole defence was like a big family environment,” he adds, gratefully.

But play? Not quite yet. Eveillard did not see game action in that season of transition. That was understandable, he says. “They weren’t going to trust me because I just switched, right?”

Maybe Eveillard could have started the following season. Probably would have, actually. But that was 2020 and the entirety of the university football season was cancelled amidst the still-emerging pandemic. That gave Eveillard even more time to prepare.

“This whole time I was practicing,” he says of a year without game action. “Practicing my technique.”

This past season, the struggling receiver with the lean, muscular build and explosive quickness got his chance to really re-invent himself, dressing for all six of Ottawa’s regular-season games and two more in the playoffs, amassing 6.5 tackles, 2.5 sacks and a forced fumble along the way. Not bad at all for a recently-converted receiver.

“It’s extremely rare for a guy to be able to make that type of transition,” says Gee-Gees’ head coach Marcel Bellefeuille, adding that Eveillard’s renaissance is even more impressive considering the context of Covid cancellations.

“He had to make the transition without spring football, without a training camp and only a six-game regular-season. So, he’s played eight games at defensive end. And played well.”

Still, Eveillard was not a well-known commodity among CFL general managers and personnel people. Bellefeuille says many teams had Eveillard on their draft boards as a receiver until the coach assured them he ought to be considered a rush end.

“He understands the game,” says Bellefeuille, beginning a short scouting overview of Eveillard. “He understands where his eyes should be, where his feet should be. And he studies and watches film. Very coachable. So that part plays really well for him. But the second part is he’s a really good athlete, obviously.”

If personnel people around the CFL had been thinking of Eveillard as a project at receiver, Bellefeuille’s endorsement for him and his potential at rush end will help change that perception. So will Eveillard’s performance at the regional.

In testing, he displayed his speed in running a 4.68 in the 40, good for a tie for fifth place among all players at the combine. He finished sixth overall in the broad jump. An impressive showing, but still with room for improvement. “I’m not really satisfied with my numbers,” says Eveillard. “I think I can improve all the physical tests.”

He enjoyed the one-on-ones, in particular the frenetic pace of the rotations, which offered lots of chances to showcase his natural abilities.

“The intensity was high,” he says. “And that was really fun.”

As he turns his attention to the national combine, it might well be that Eveillard is poised to really turn some heads. We’ll see. His desire to improve and to raise his stock seems to be matched by his love of the whole process and his regional experience only served to sharpen that sensibility, while offering him a chance to get familiar with performing in front of all those prying CFL eyes.

“I enjoyed eeevvvery moment,” he says, stretching out the word as though he was savouring it all once again. “I just loved it. I loved everything that happened down there.”

It’s a happy occurrence, then, that he made the decision to give it a go. Because even after a satisfying final season of university ball, the still-developing rush end wasn’t certain he ought to.

“At the end of the season,” he explains, “I wasn’t sure yet if I wanted to try myself as a professional. But I really talked a lot with my coaches and my teammates and they encouraged me to at least try. To not regret anything.”

Now, he looks forward to the big combine and another opportunity to raise his stock.

That’s a big change for a player who just a couple of years ago was resigned to the fate he saw as realistic: Ending his football career after finishing university and having put his all into it, trying to improve, day after day, as a receiver.

Now, Frednick Eveillard is a prospect at rush end and he is curious as to what his football future might hold.