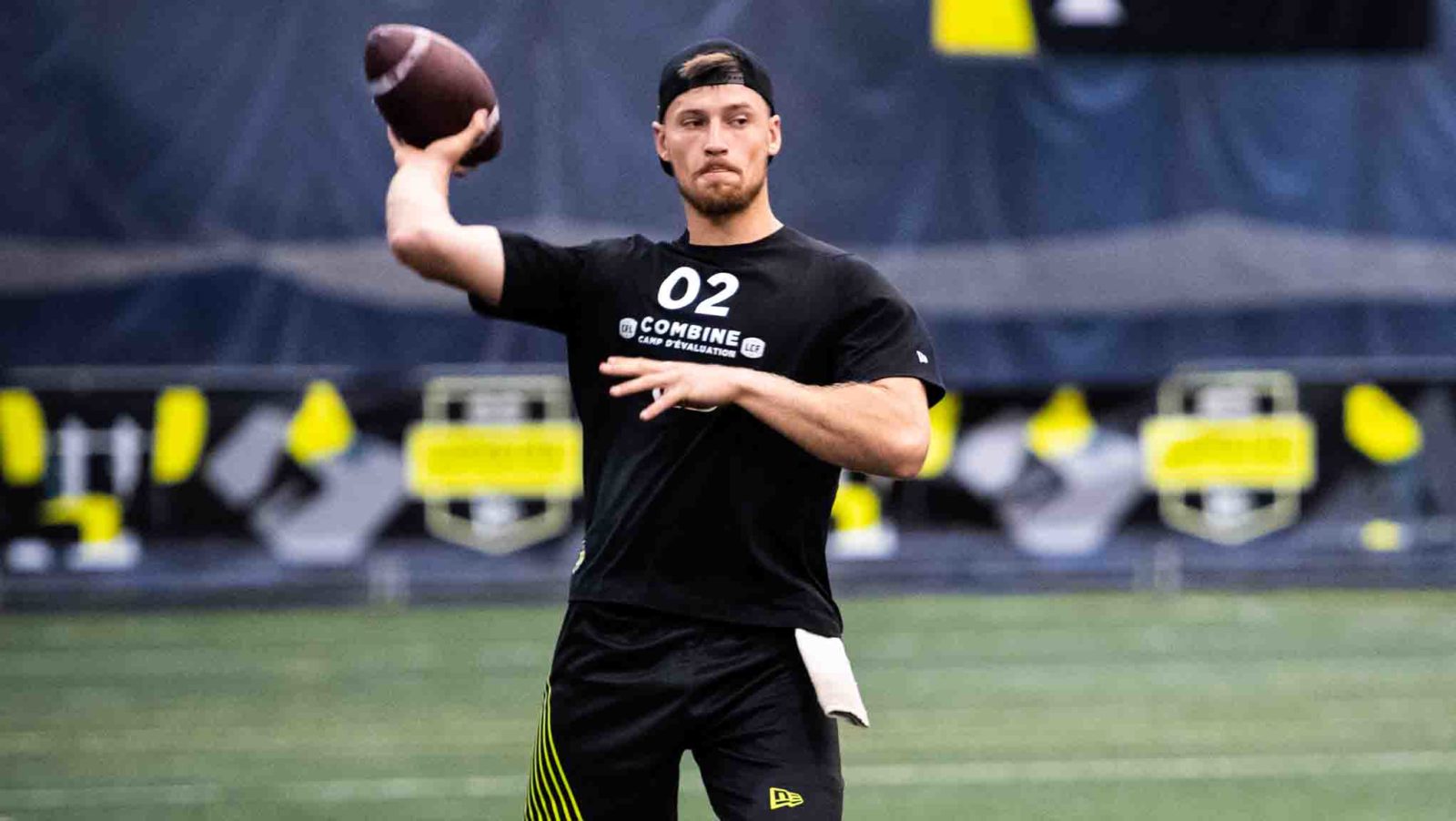 TORONTO — For a few days at the end of March, the lights will get brighter and Canada’s top amateur prospects will put their talents on full display.

The CFL Combine presented by New Era hits Toronto from March 26-27, putting the country’s football future in the spotlight.

CFL COMBINE presented by New Era
» Historical Results: A look back at past CFL Combines
» Combine 101: The basics behind each prospect drill
» NCAA prospects to watch at the CFL Combine

Some of the players that went through the CFL Combine before becoming stars include Taylor Loffler, Lemar Durant, Henoc Muamba, Brad Sinopoli and Sukh Chungh and this year’s crop of hopefuls will look to follow in their footsteps.

While we wait to watch them take centre stage, let’s take a look through the lens at the CFL Combine over the years: 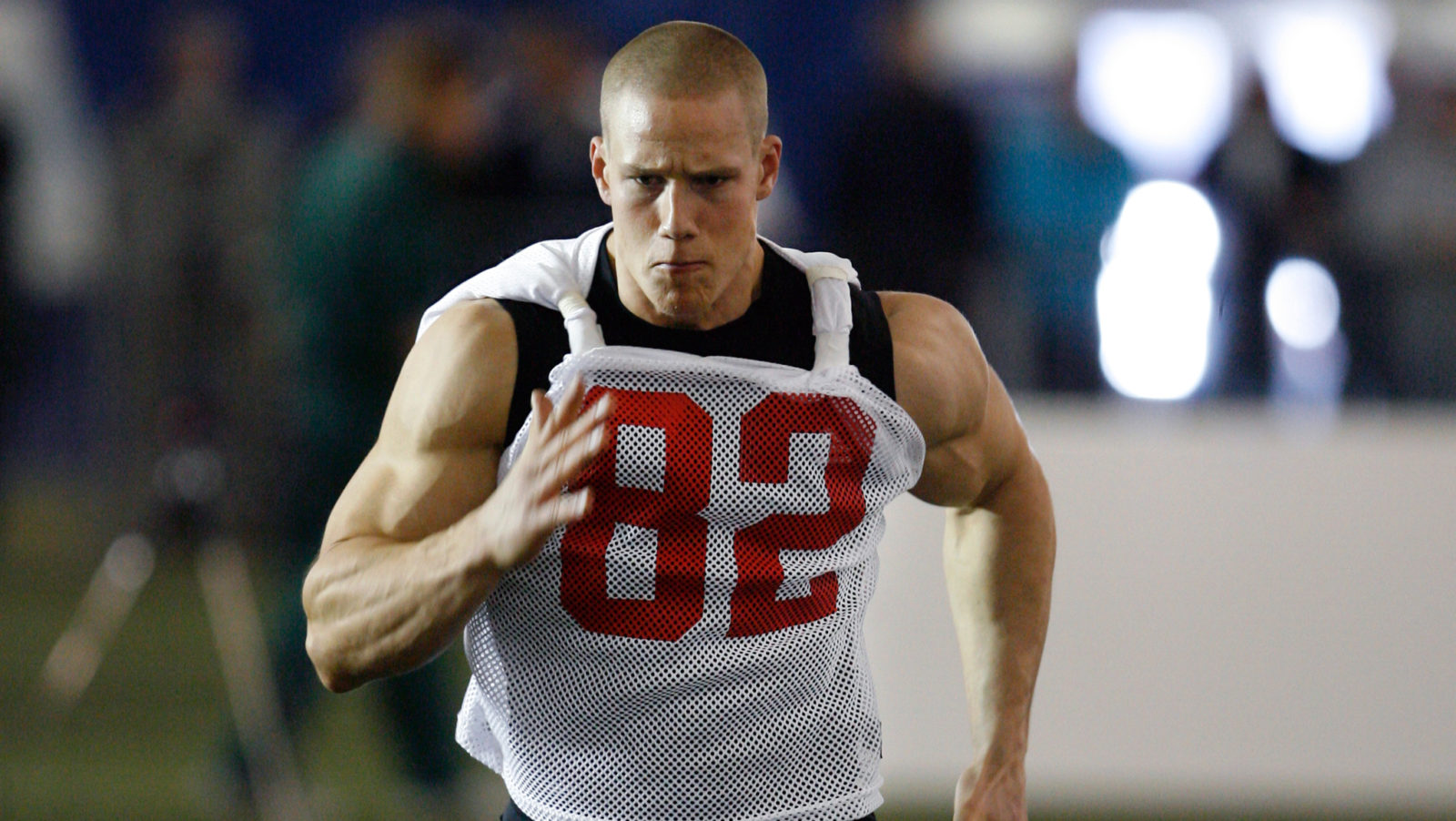 Eventual eighth overall draft pick Sam Giguere runs the 40-yard dash during evaluation camp in 2008. Giguere would spend four years in the NFL before signing with Hamilton in 2012 (Photo: CFL.ca) 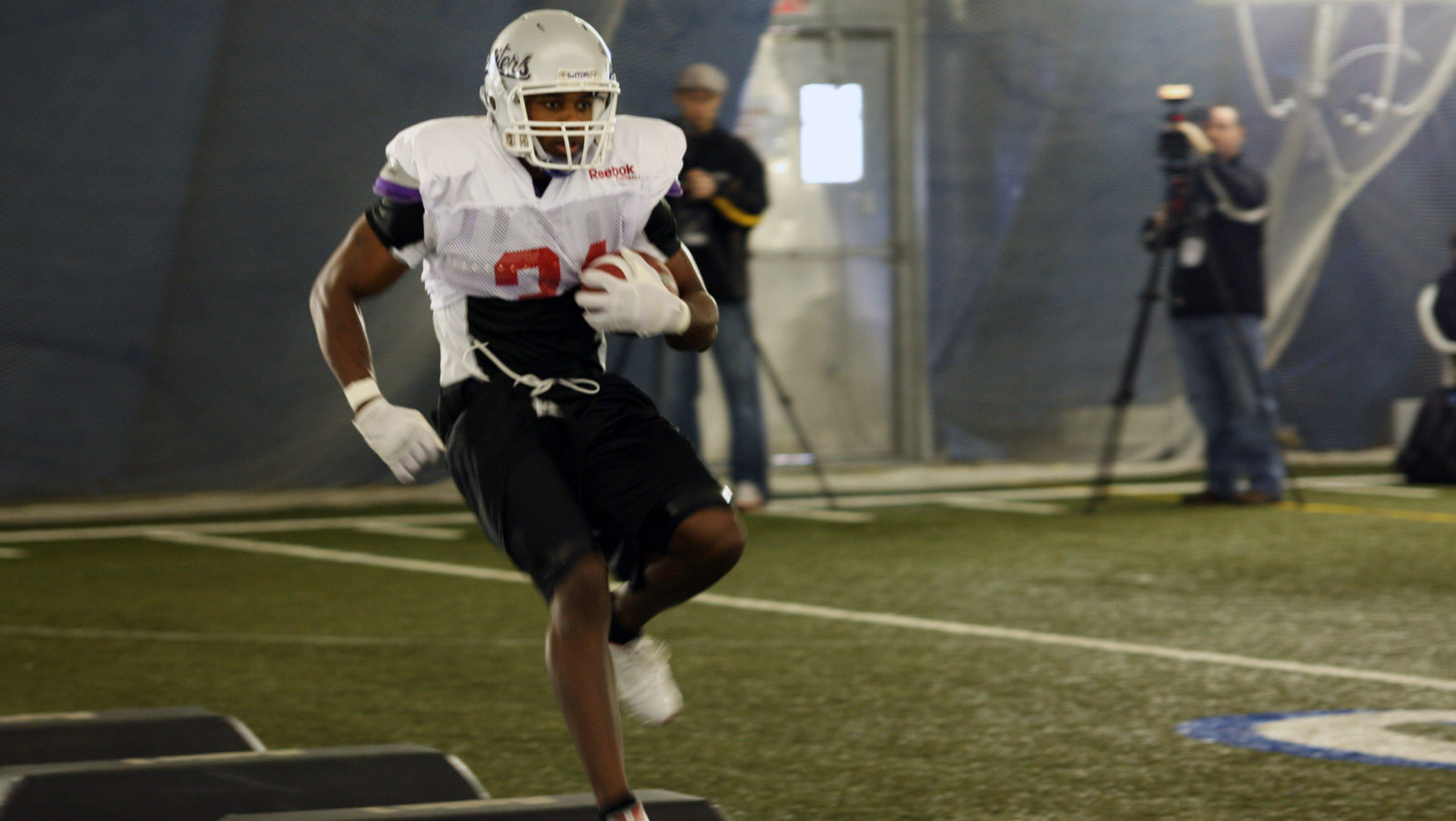 A record-breaking day at E-Camp, including a 4.39 40-yard dash and 44-inch vertical, helps running back Jamall Lee become the third overall draft pick in 2009 (Photo: CFL.ca) 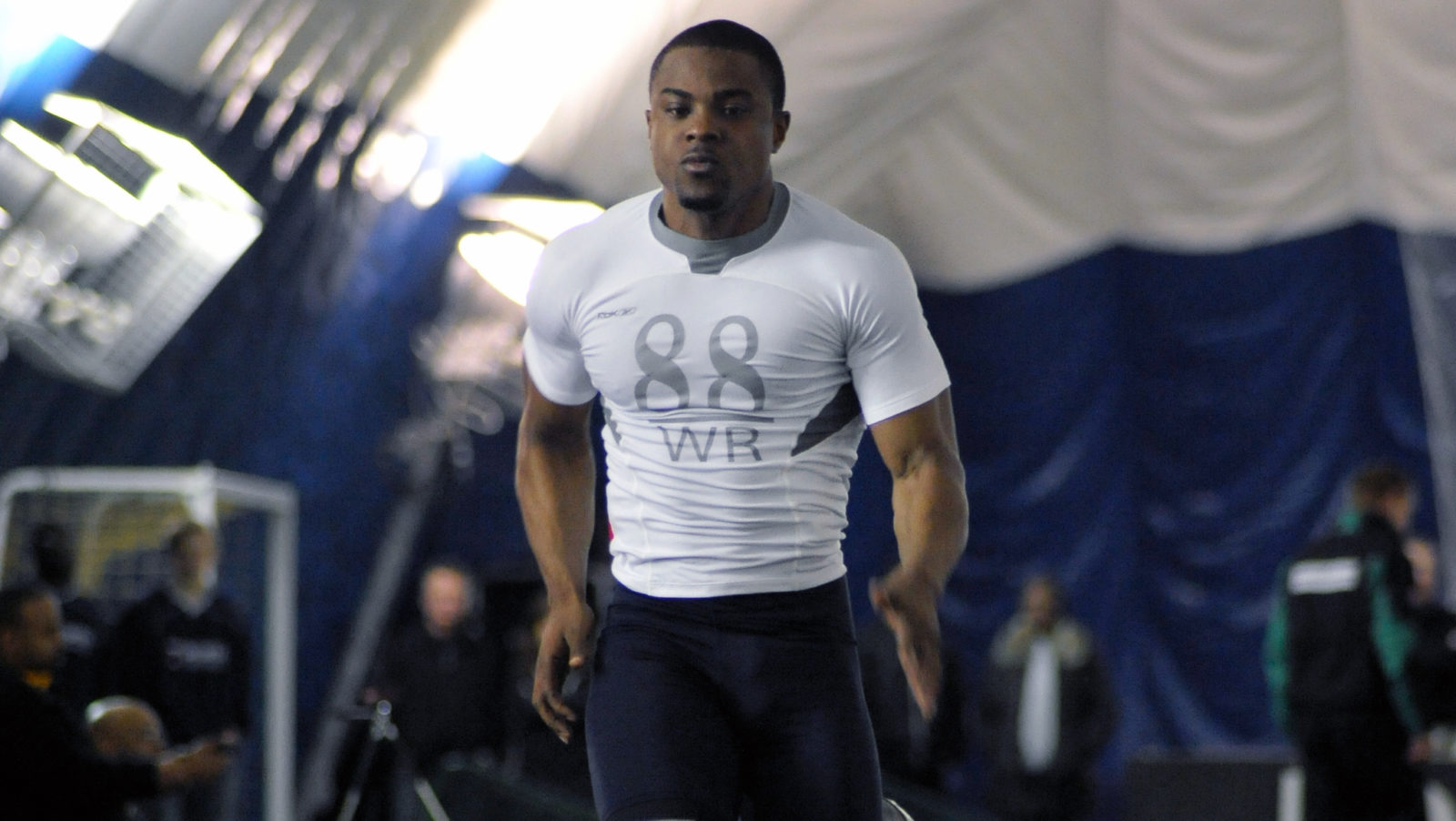 Steven 'Afterburner' Turner breaks Jamall Lee's hand-timed 40-yard dash record, blazing to a run of 4.31. The Bishop's product ranks near the top of ever test at the 2010 evaluation camp (Photo: CFL.ca) 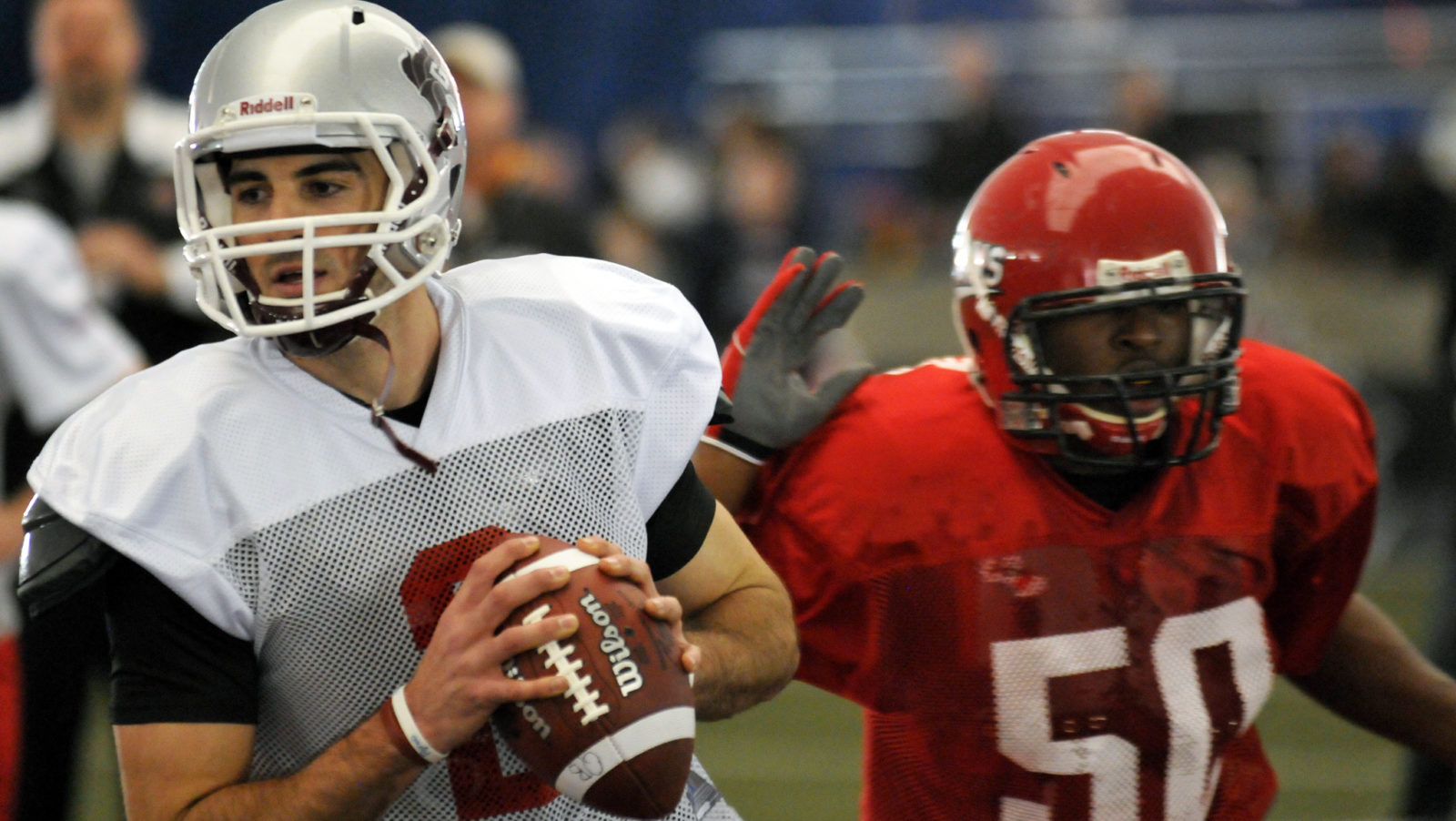 Before becoming regarded as one of the best receivers in the CFL, Brad Sinopoli was a quarterback prospect out of the University of Ottawa. He's pictured above during 2011 E-camp (Photo: CFL.ca) 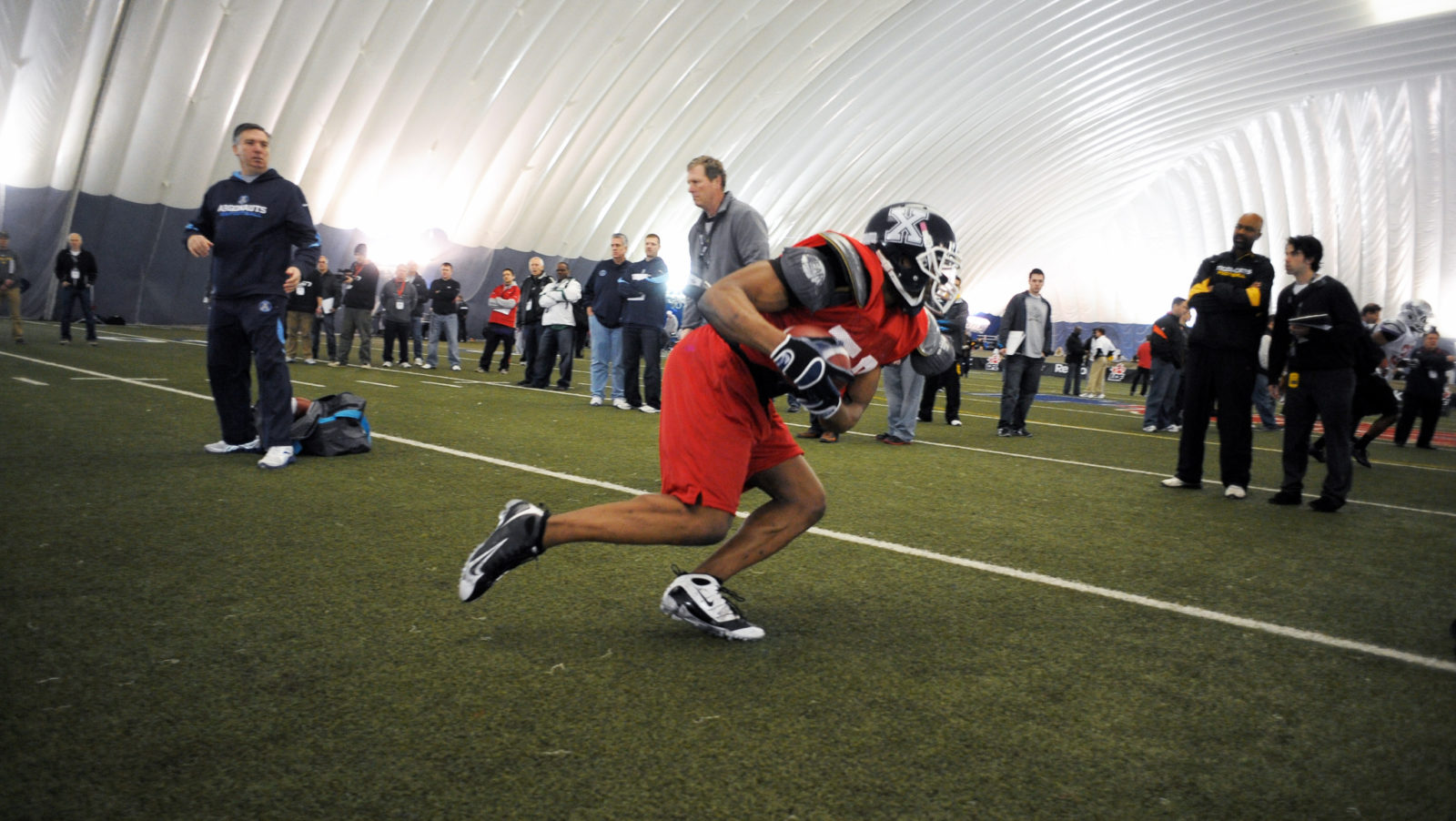 Henoc Muamba's strong showing at evaluation camp in 2011 helped him become the draft's first overall pick. Today he's one of the CFL's top linebackers with the Toronto Argonauts (Photo: CFL.ca) 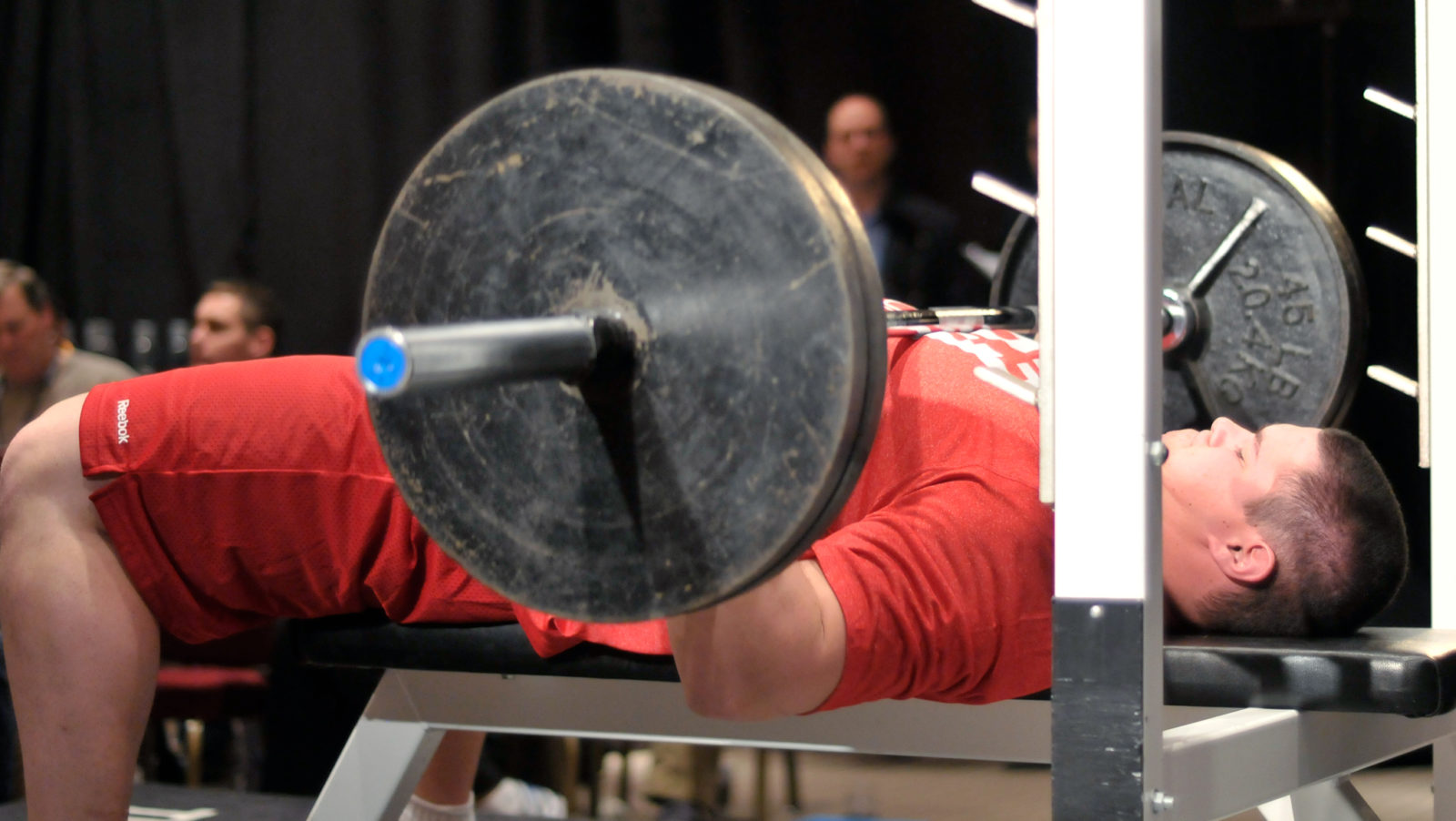 After shattering Mike Montoya's record on the bench press, Michael Knill's 47 reps in 2011 continue to be in a different stratosphere (Photo: CFL.ca) 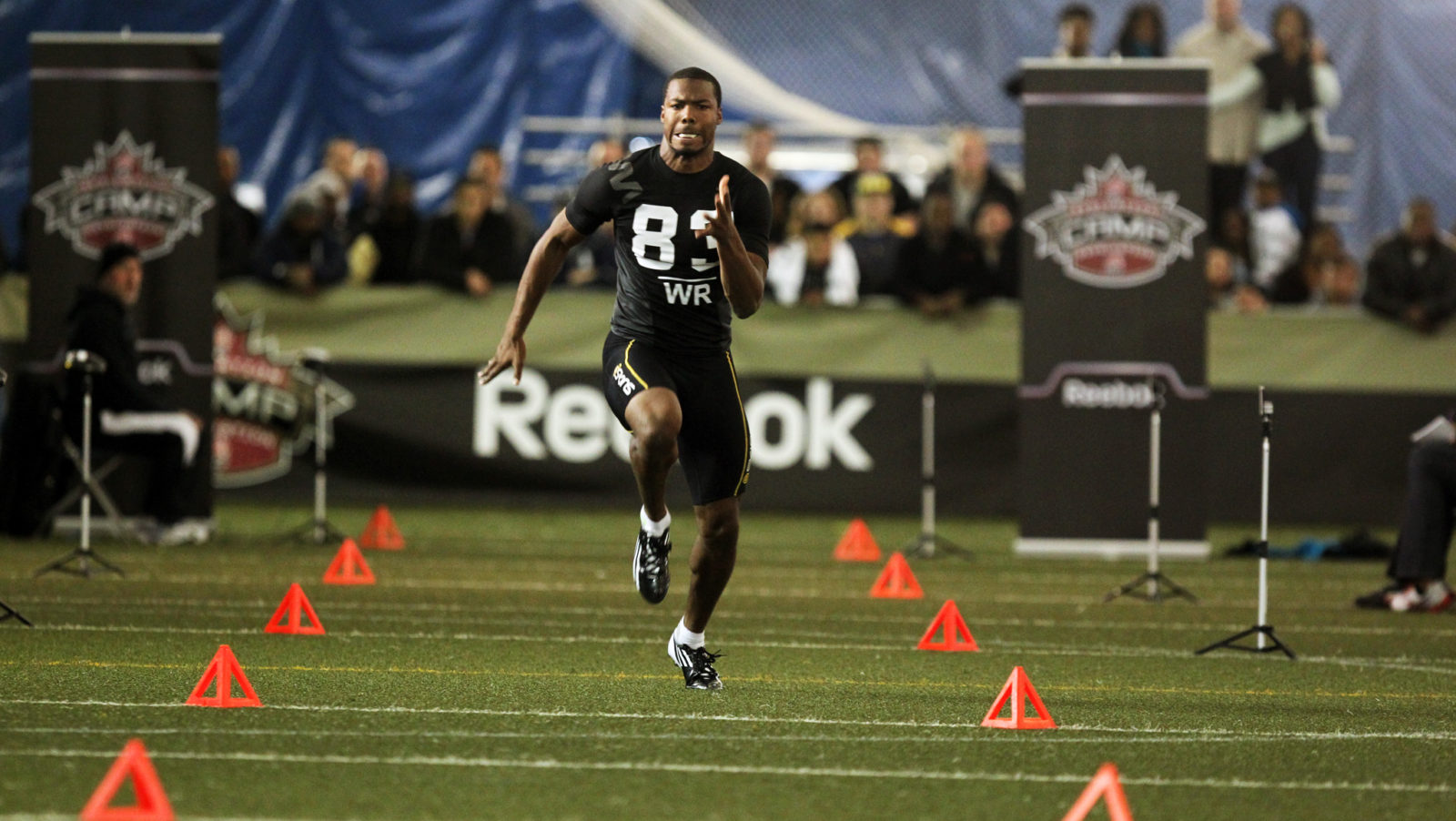 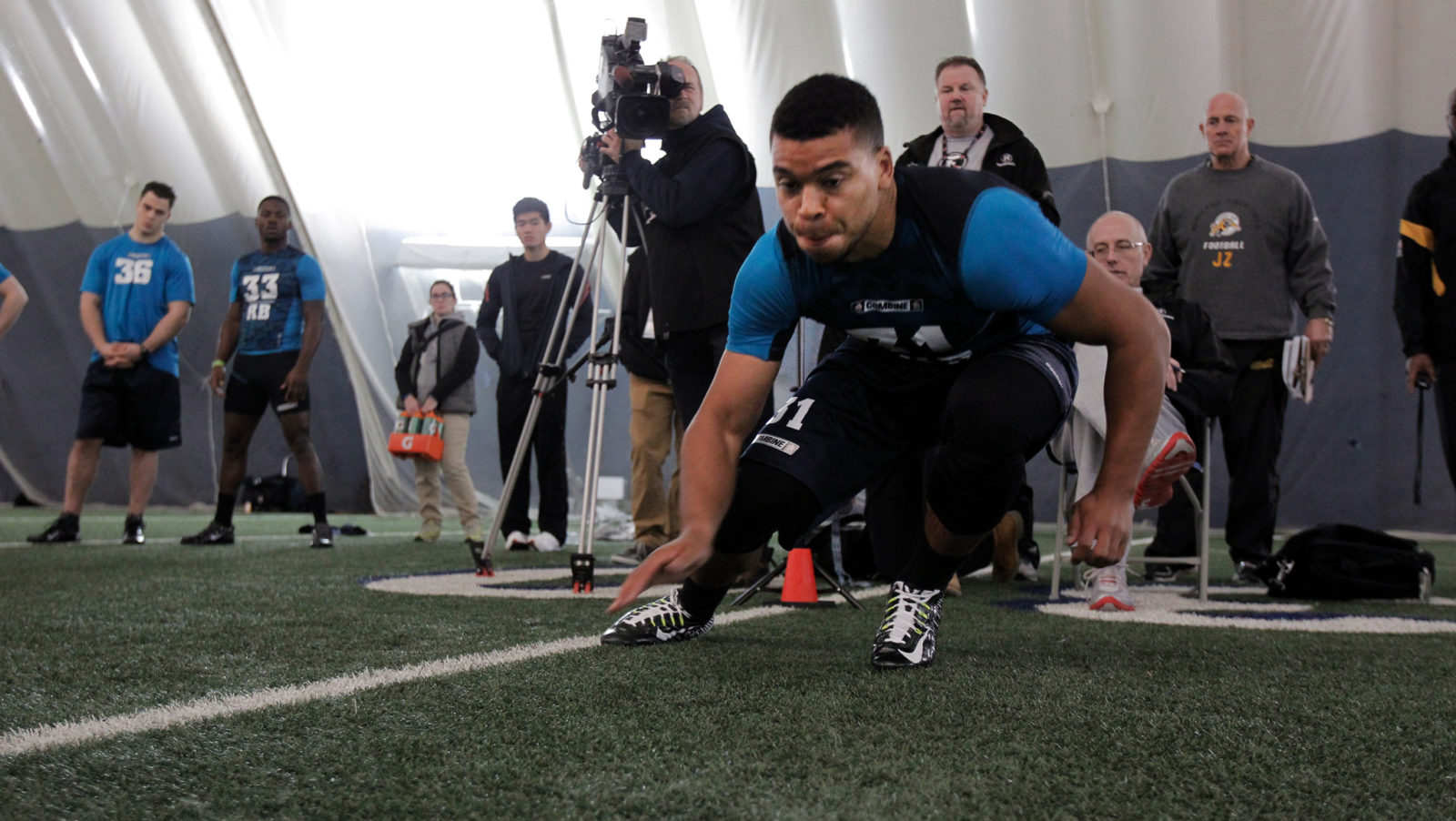 Anthony Coombs is pictured during the short shuttle test at the 2013 CFL Combine. Coombs later did one-on-ones as both a running back and receiver, helping him become a third overall pick in the draft (Photo: CFL.ca) 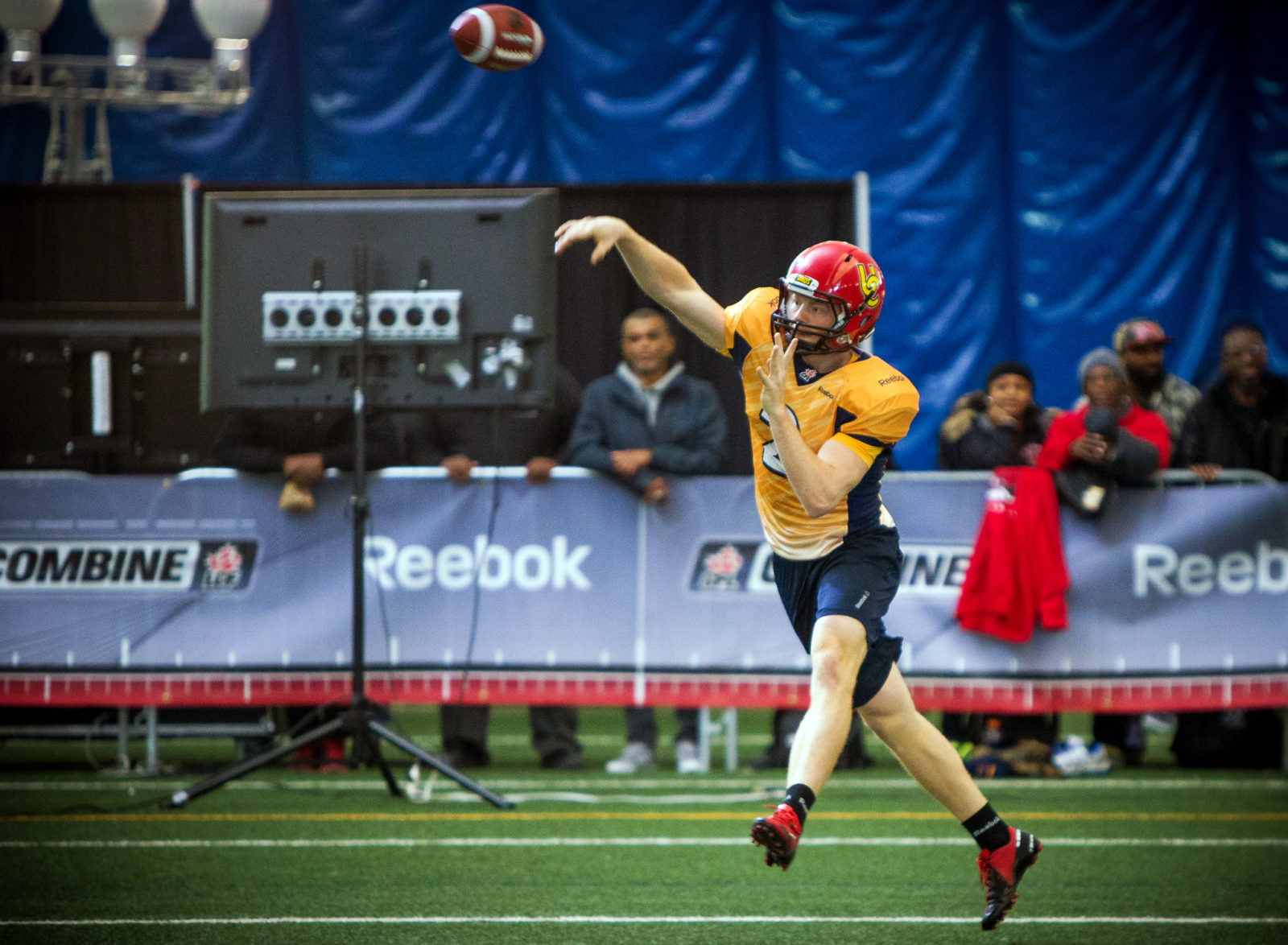 Calgary Dinos quarterback Andrew Buckley throws during the 2015 CFL Combine. Despite a promising career ahead of him, Buckley announced his retirement before the 2018 season (Photo: Johany Jutras/CFL.ca) 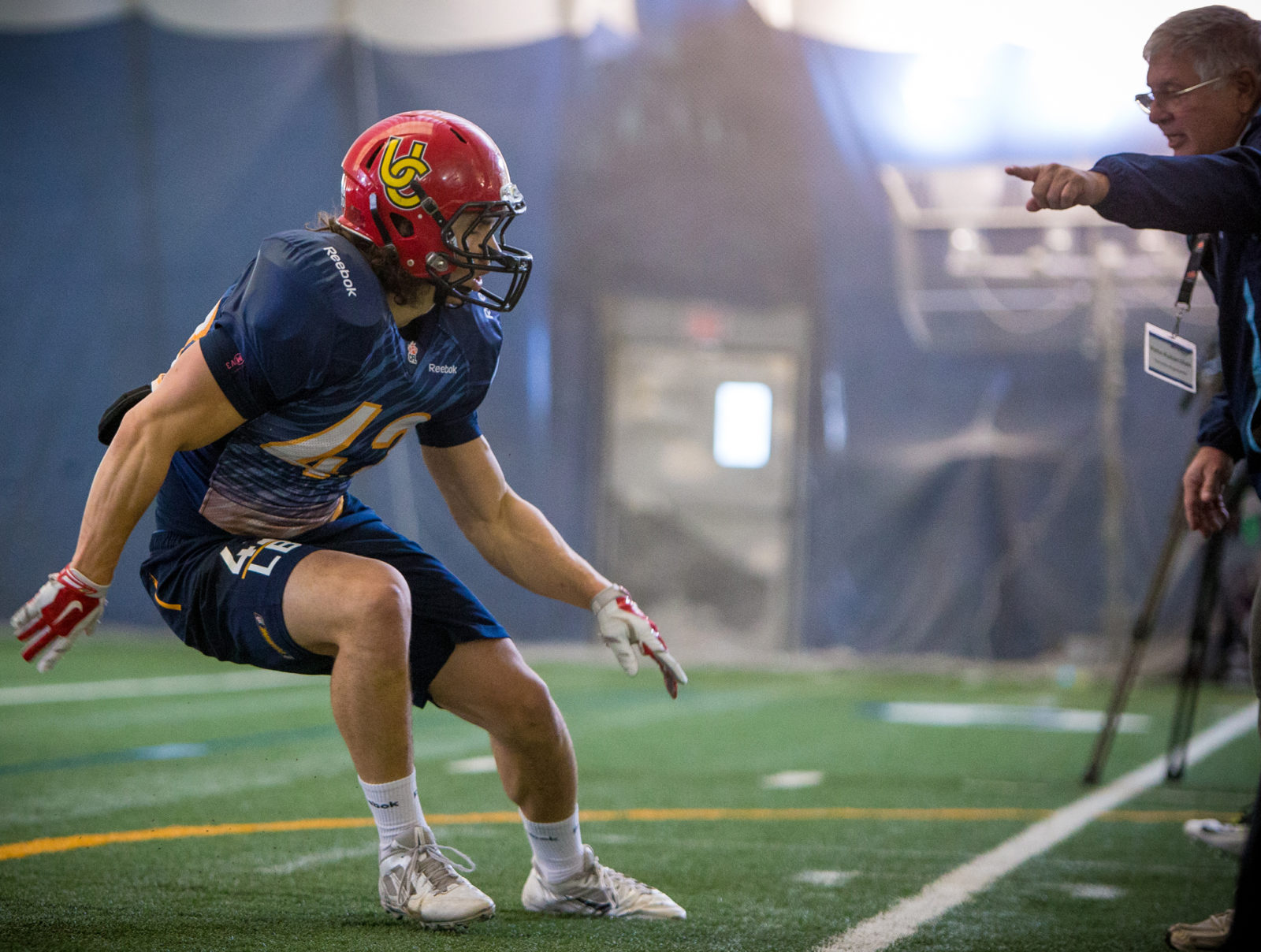 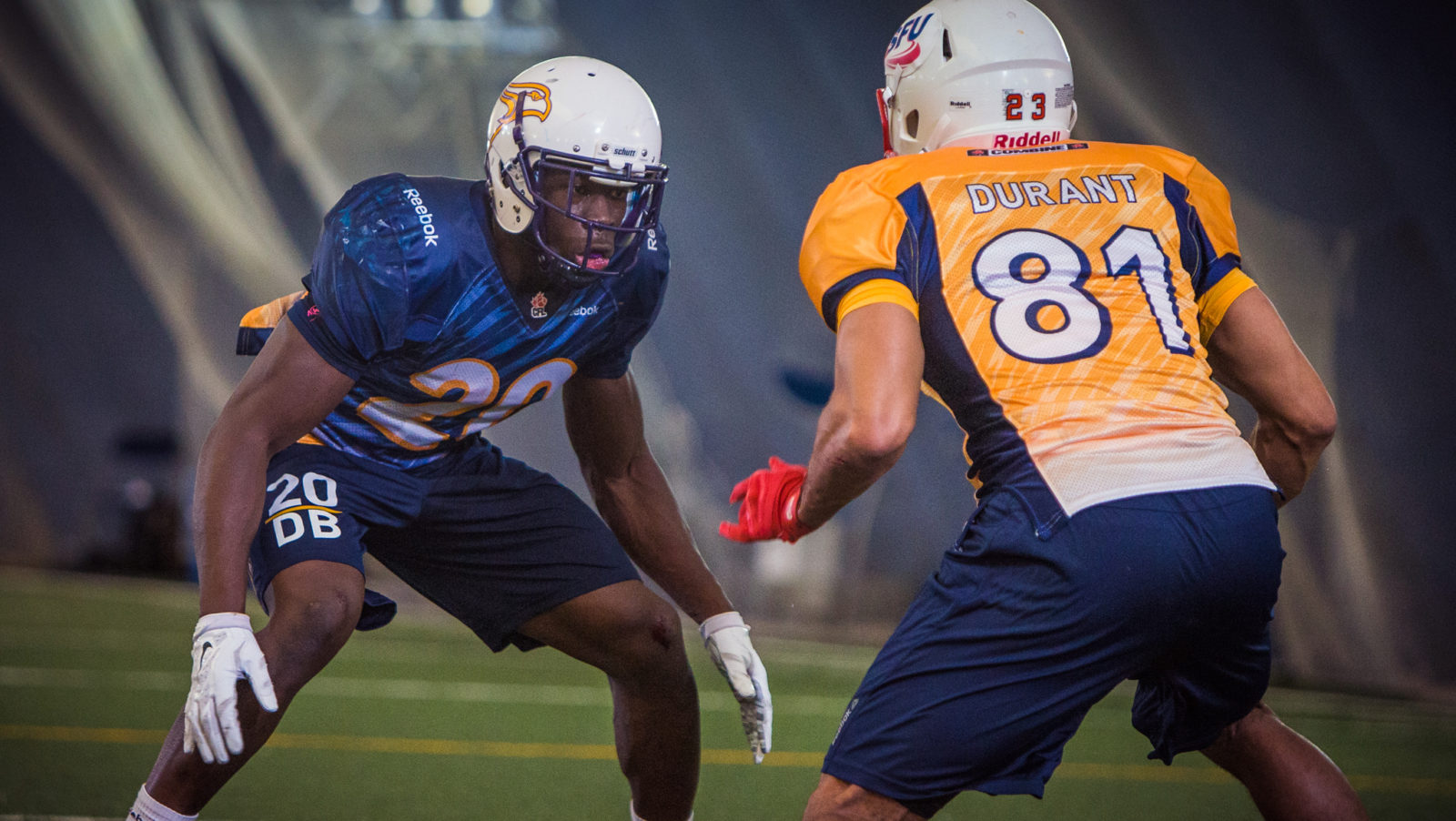 Two of the highest-touted stars at the 2015 CFL Combine, defensive back Chris Ackie and receiver Lemar Durant lineup against one another during one-on-ones (Photo: Johany Jutras/CFL.ca) 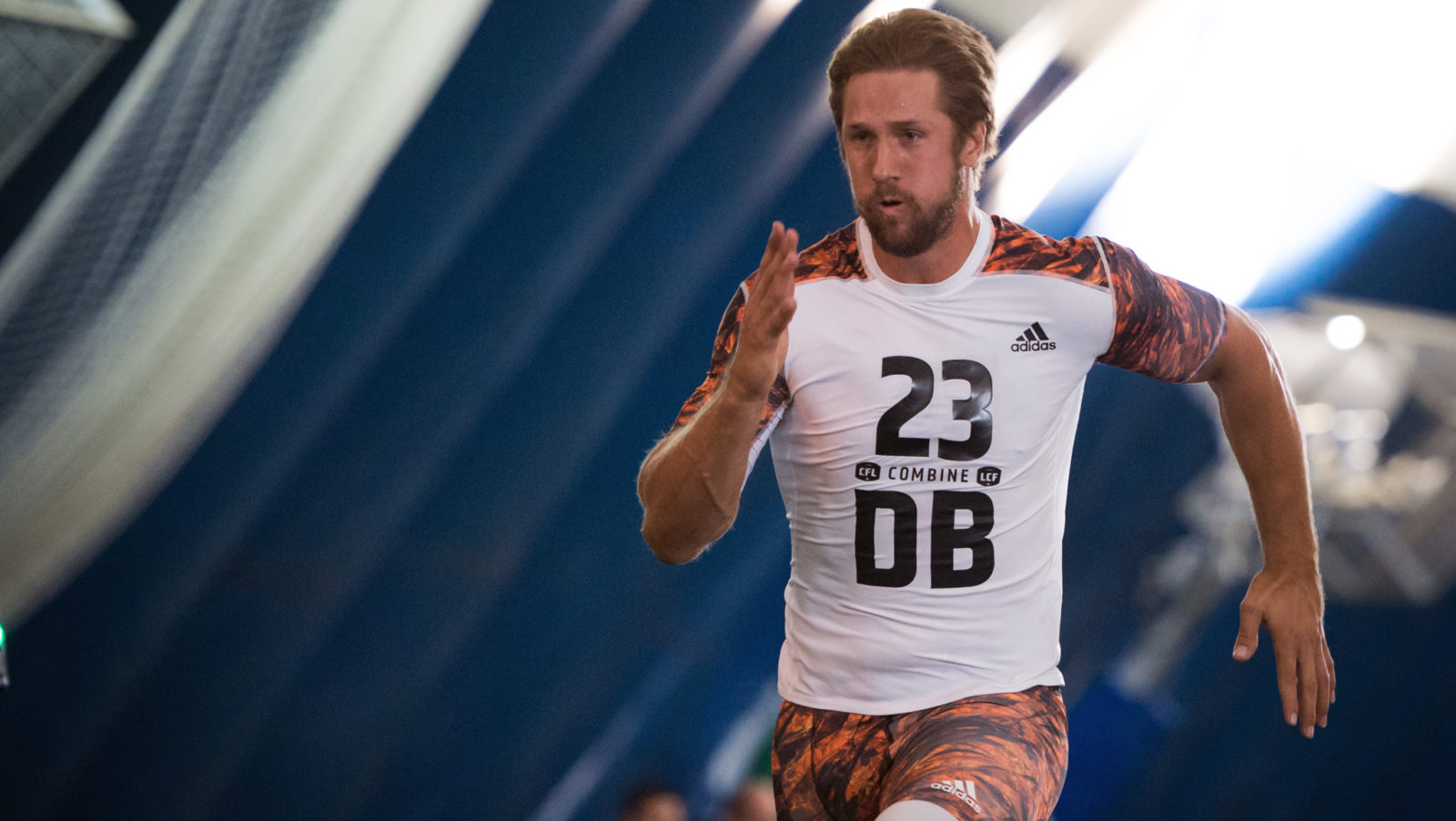 Llevi Noel finishes the 40-yard dash in front of scouts and GMs in 2016. Noel's big day at the combine catches the eye of his hometown Argos, who draft him in round four (Photo: Johany Jutras/CFL.ca) 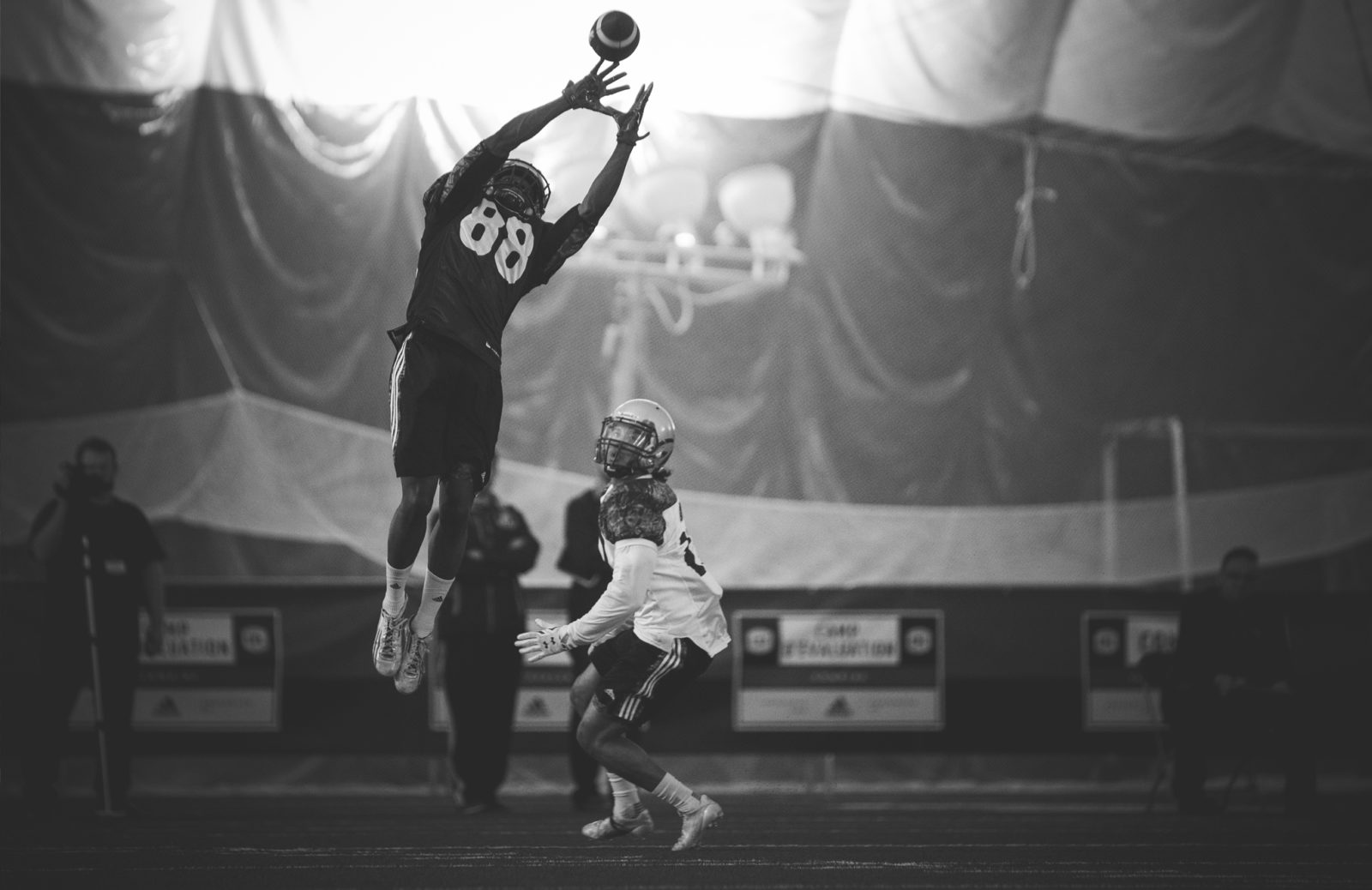 Days after starring at the Ontario Regional Combine, receiver Shaq Johnson is photographed high-pointing the ball on the national stage in Toronto (Photo: Johany Jutras/CFL.ca) 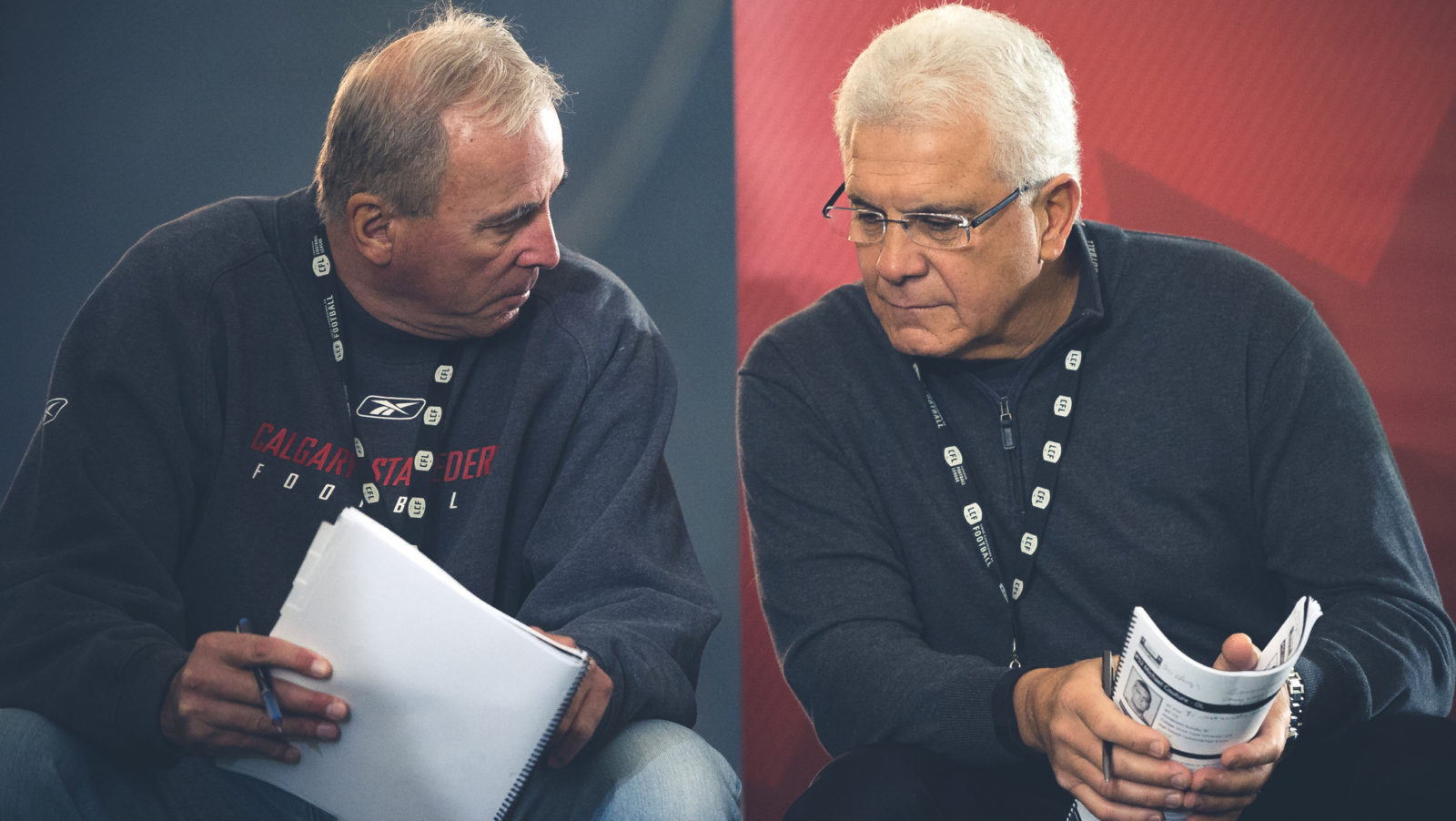 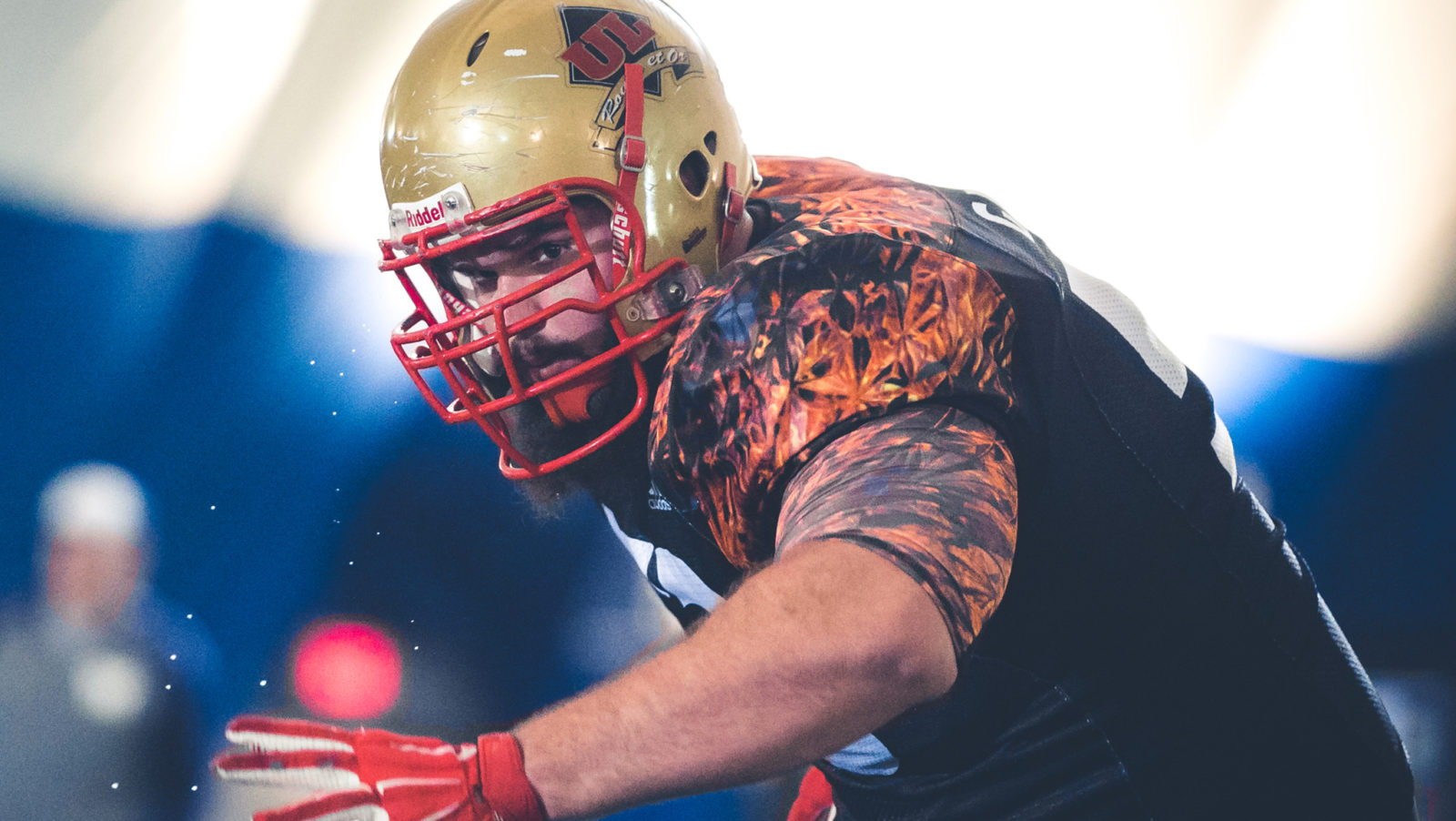 Philippe Gagnon puts on a dominant display at the 2016 combine, becoming one of three Laval O-linemen drafted in the first round that year (Photo: Johany Jutras/CFL.ca) 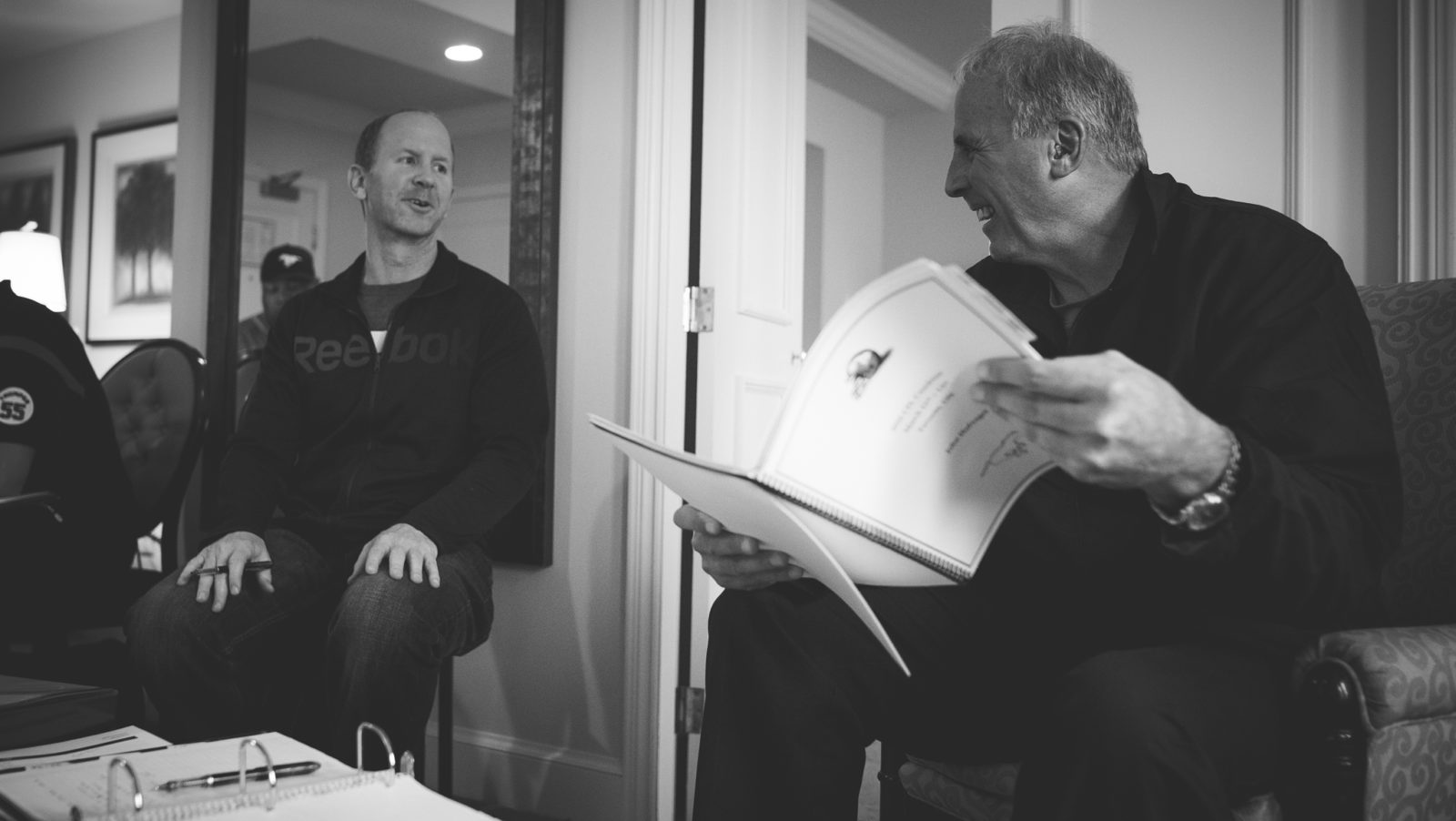 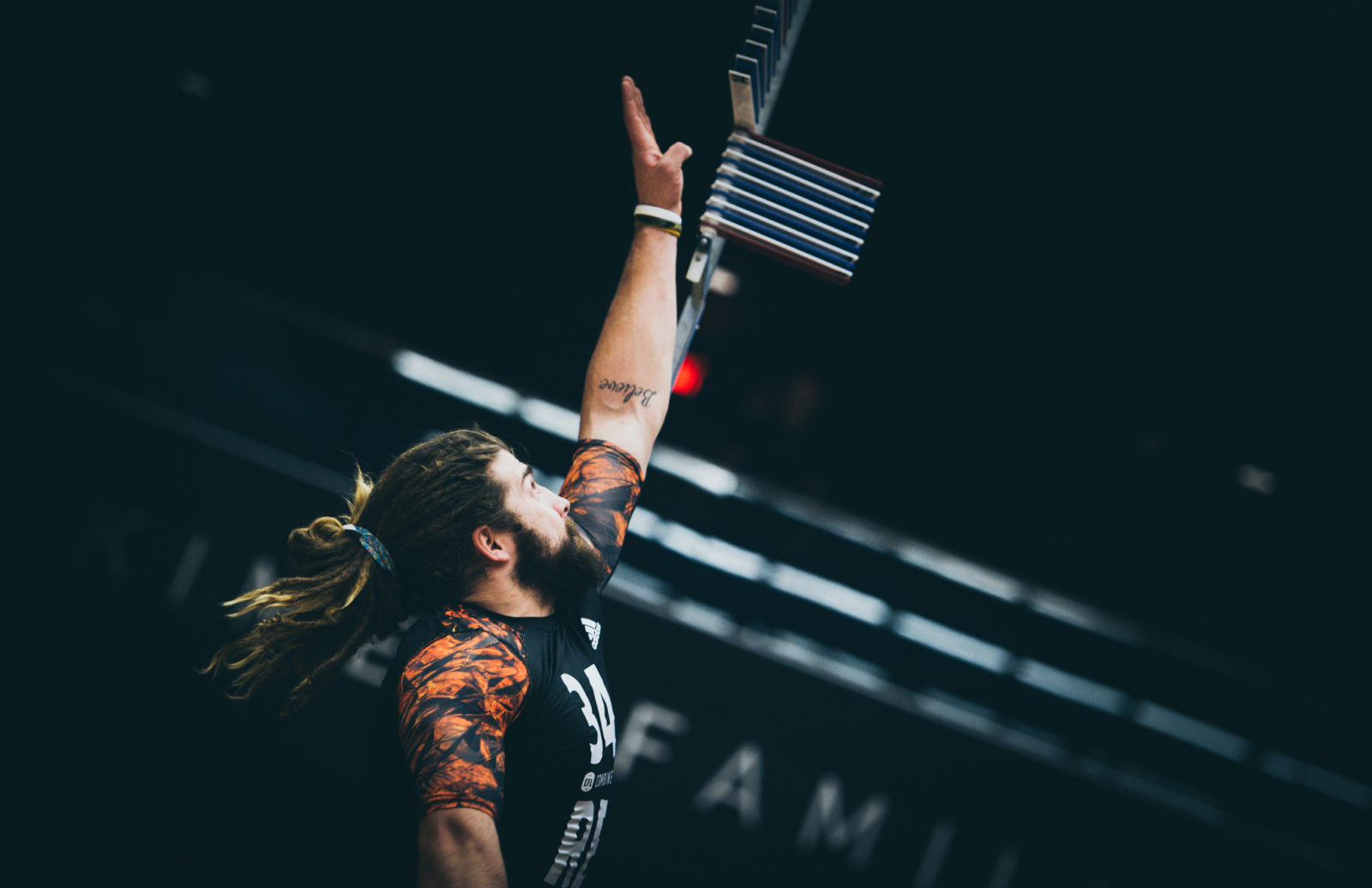 Running back Nathan O'Halloran takes part in the vertical jump during the 2016 CFL Combine in Toronto (Photo: Johany Jutras/CFL.ca) 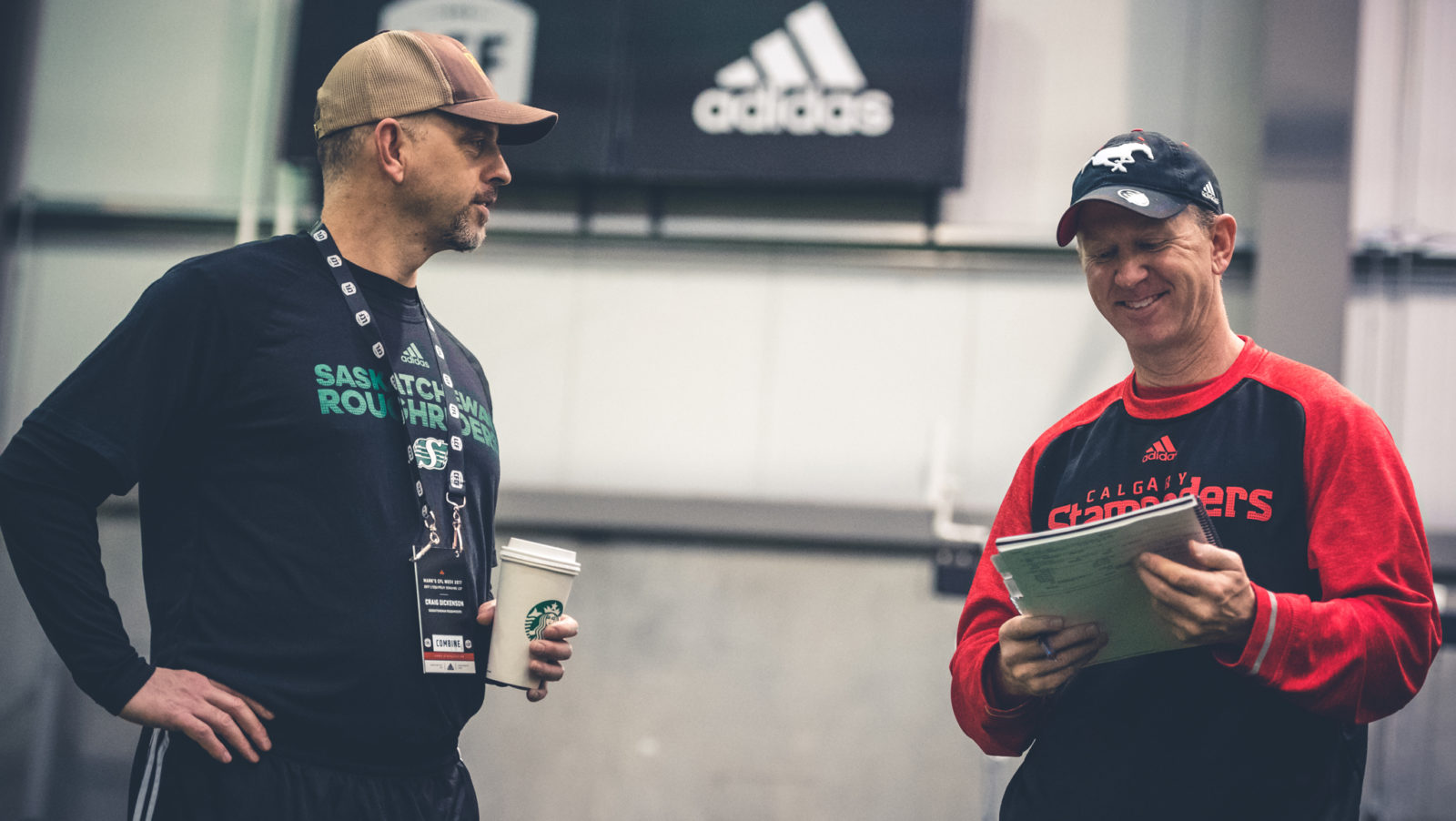 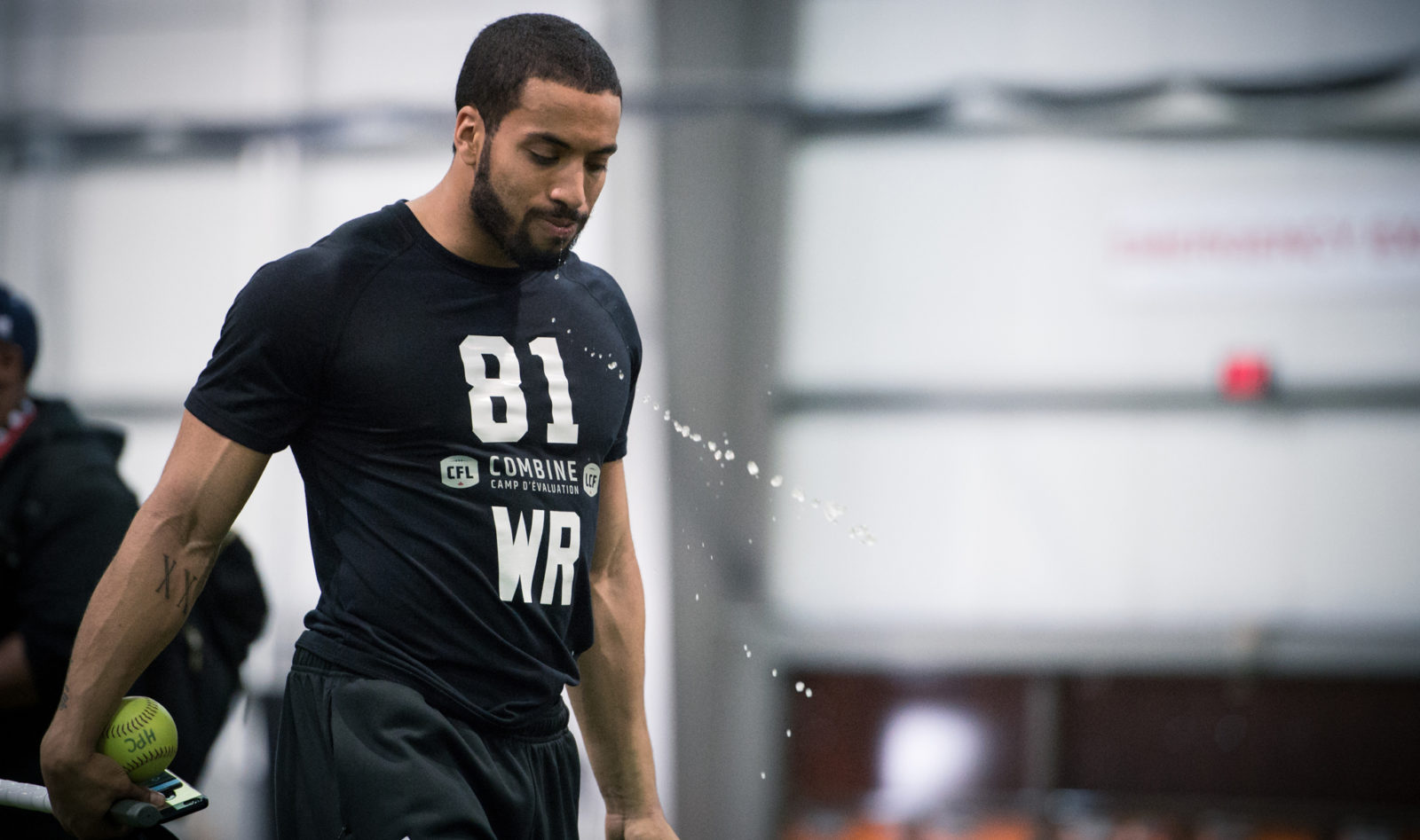 One of the top prospects in the country, Carleton receiver Nate Behar warms up during the 2017 CFL Combine in Regina (Photo: Johany Jutras/CFL.ca) 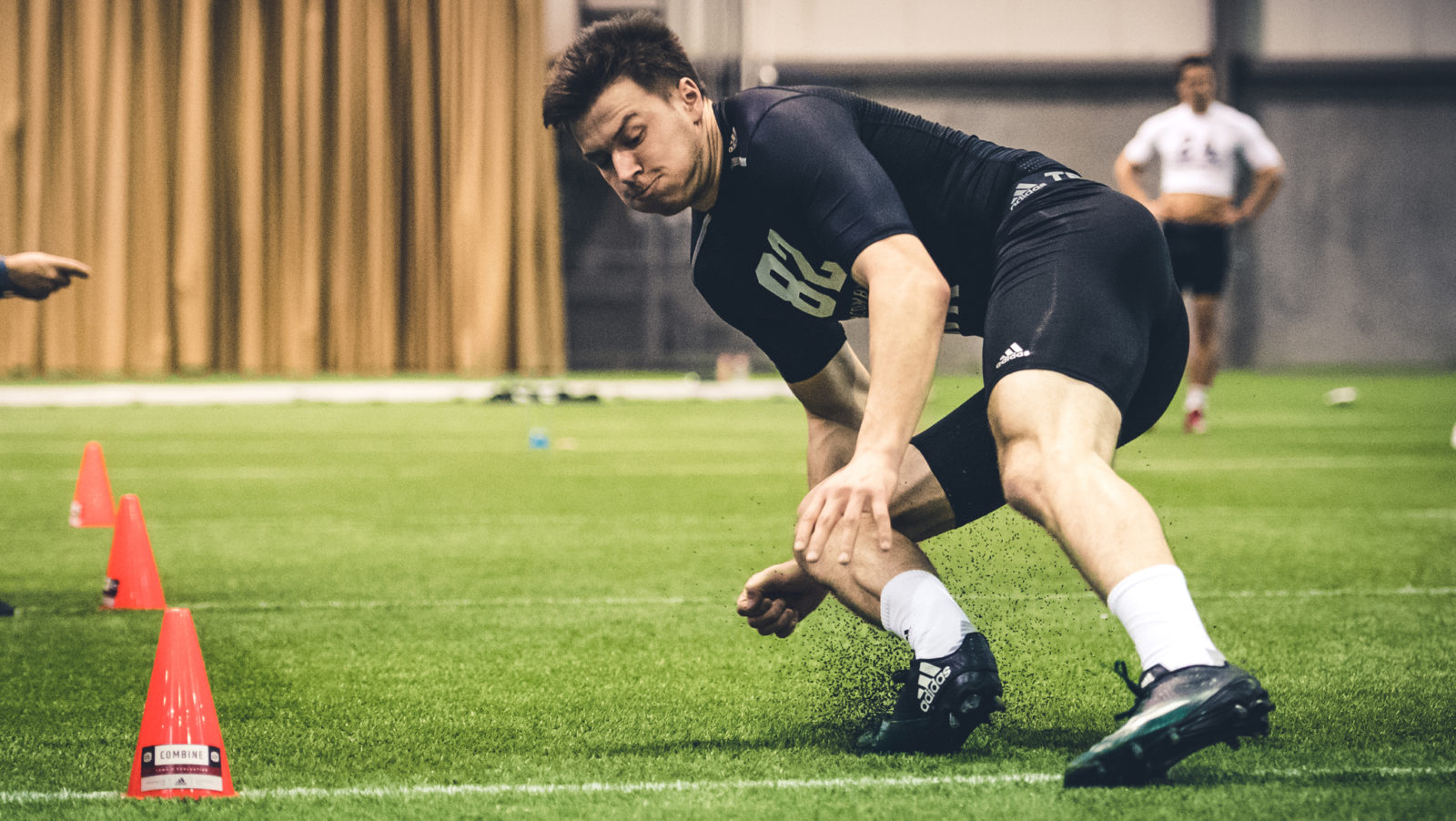 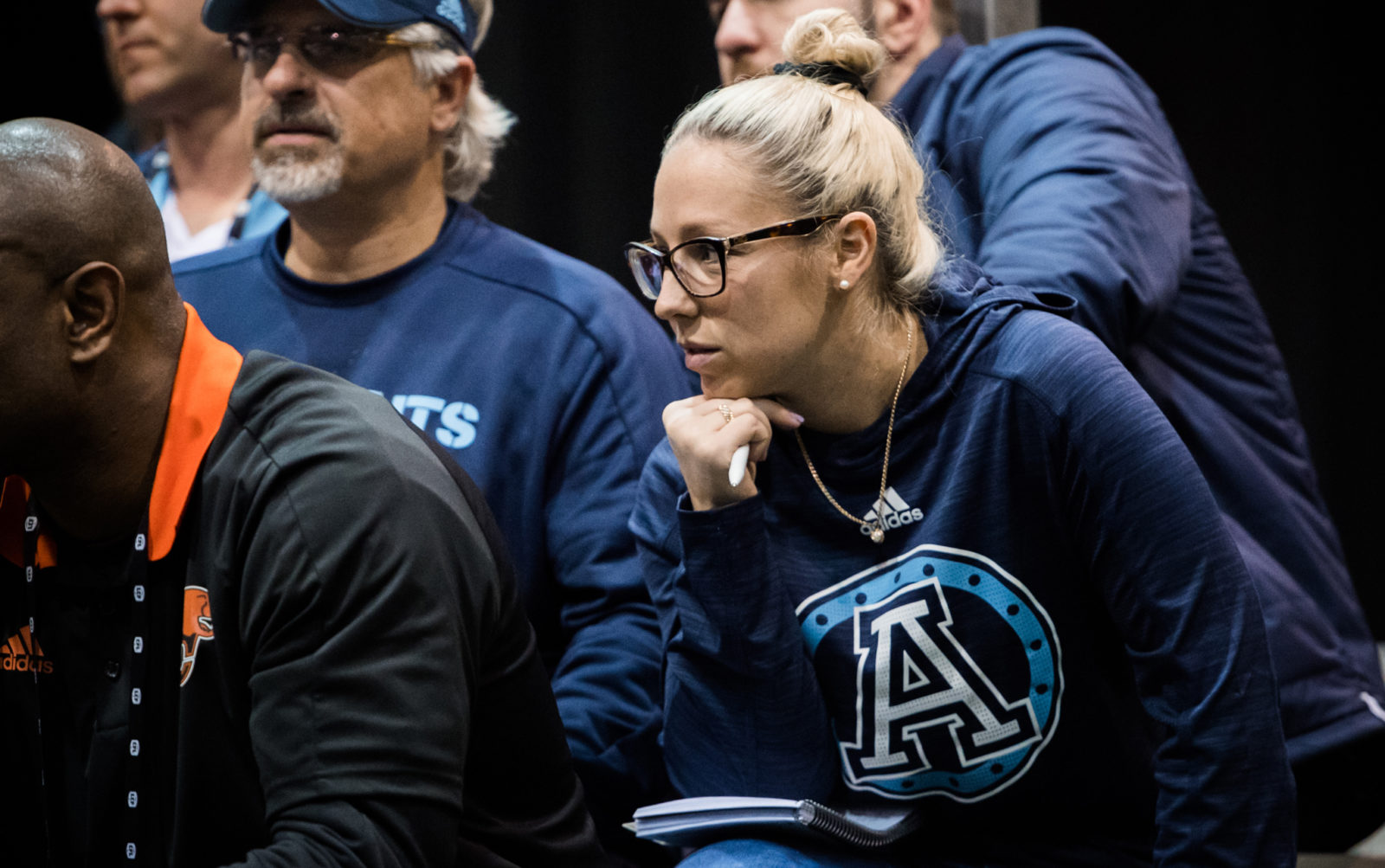 After being added to the Argos' front office, Catherine Raiche looks on during the 2018 CFL Combine (Photo: Johany Jutras/CFL.ca) 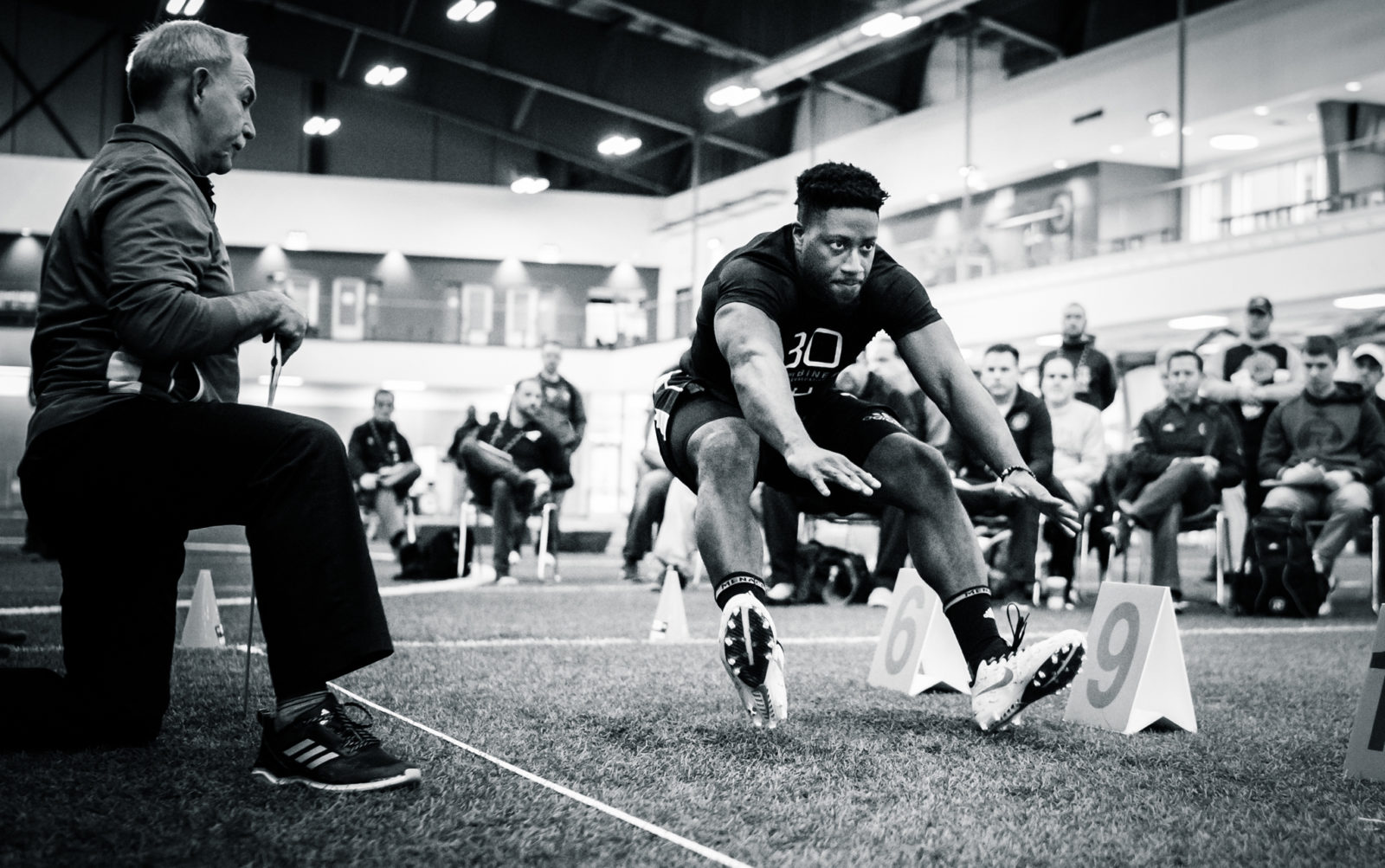 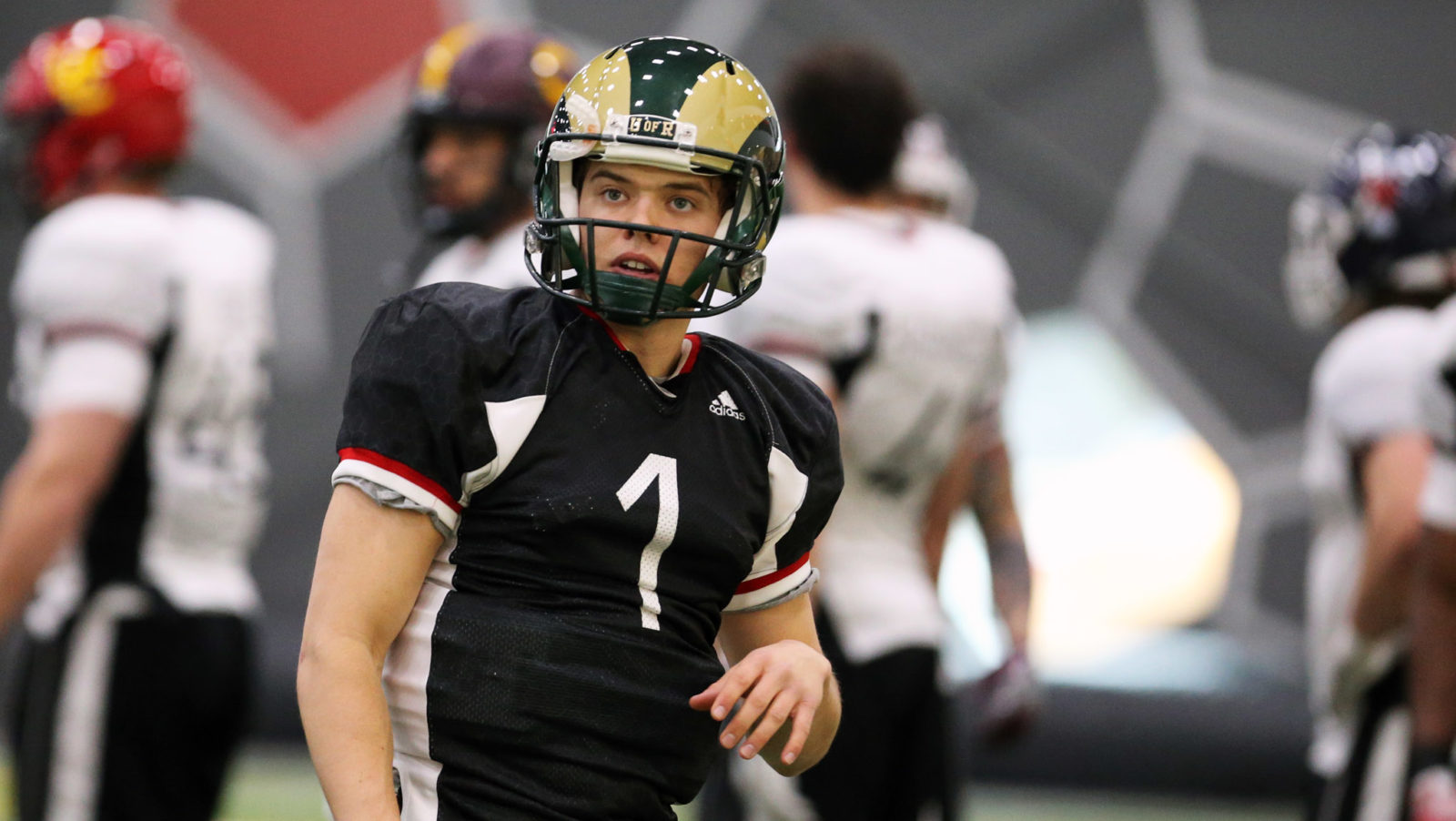 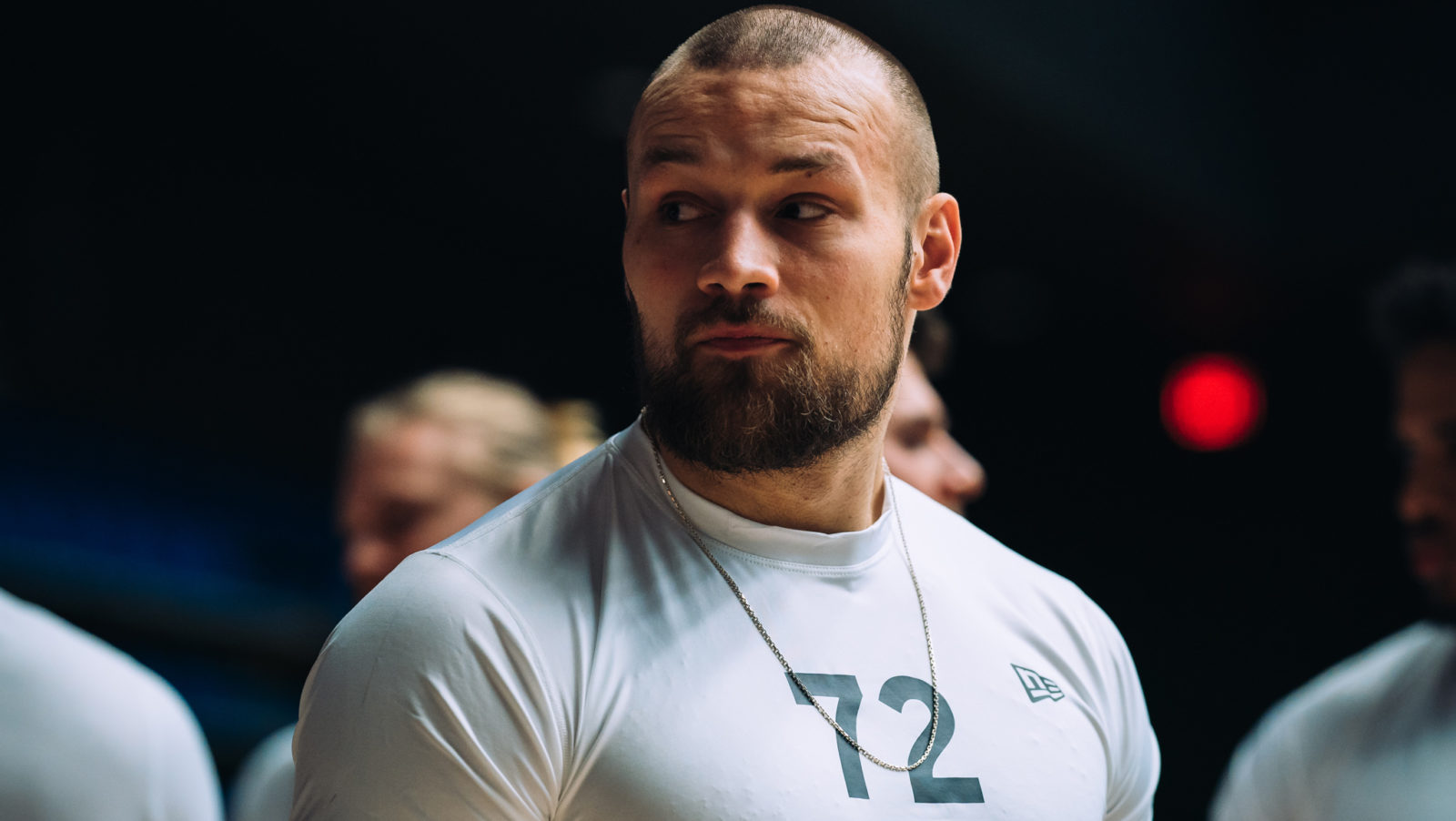 Thaidric Hansen participated in the CFL's first global combine before making an impact with the Winnipeg Blue Bombers (Johany Jutras/CFL.ca) 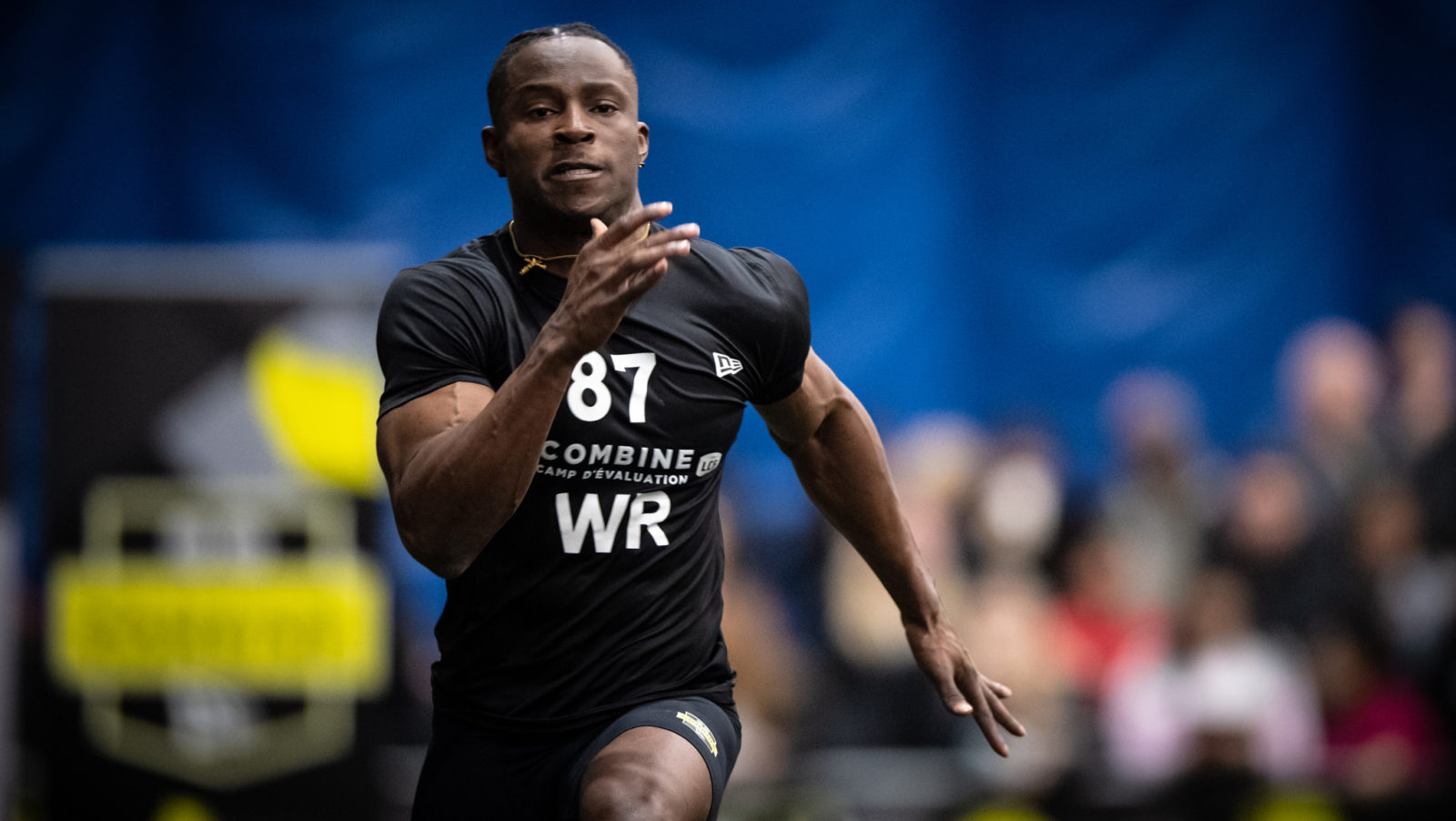 Chris Osei-Kusi recorded the fastest 40-yard dash time in 2019 (4.47) before being selected by the Montreal Alouettes in the 2019 draft (Johany Jutras/CFL.ca) 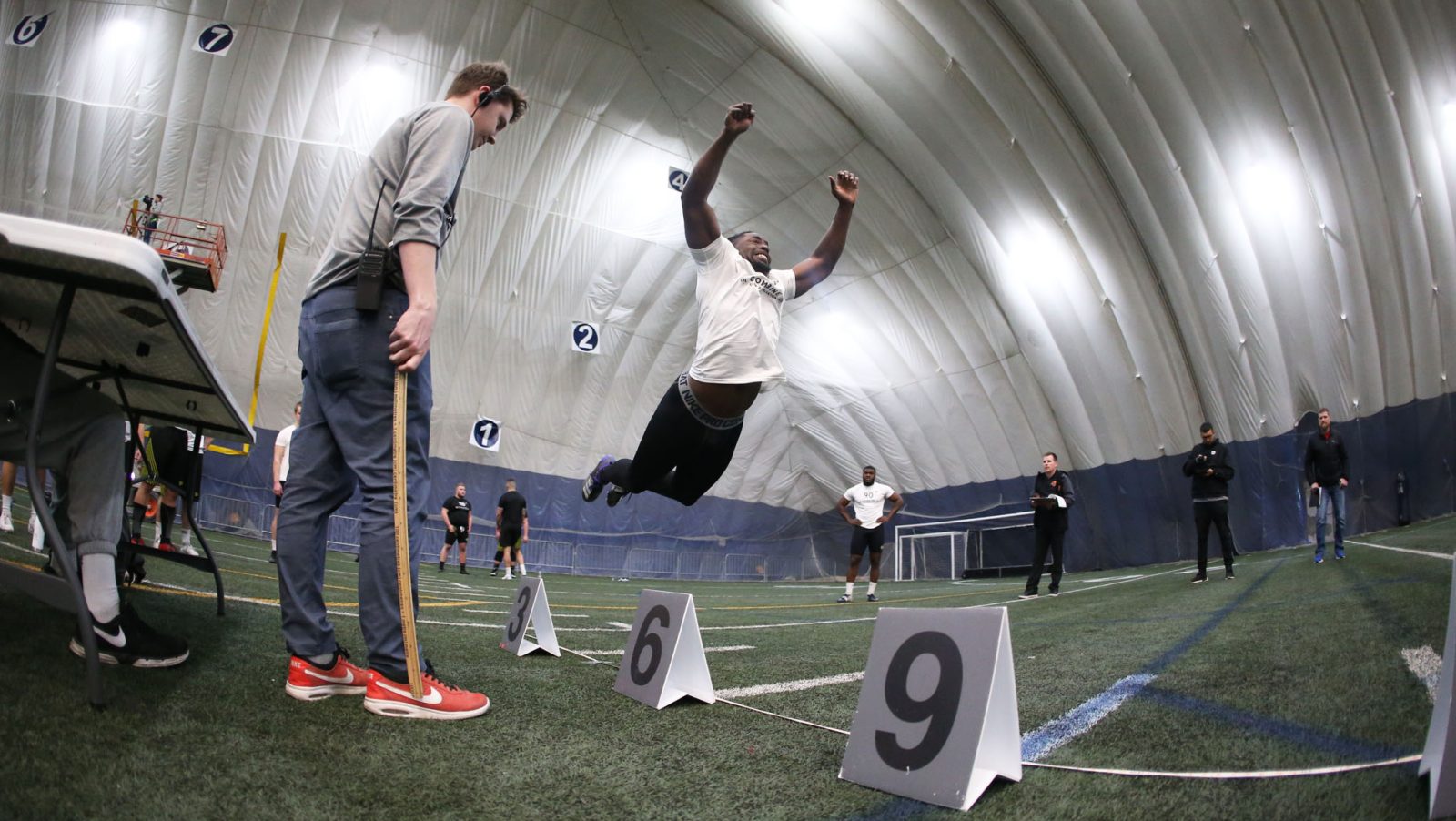 Jordan Williams became the first regional combine participant to go first overall in the CFL Draft, in 2020. He was the CFL's Outstanding Rookie in 2021 (Chris Tanouye/CFL.ca)