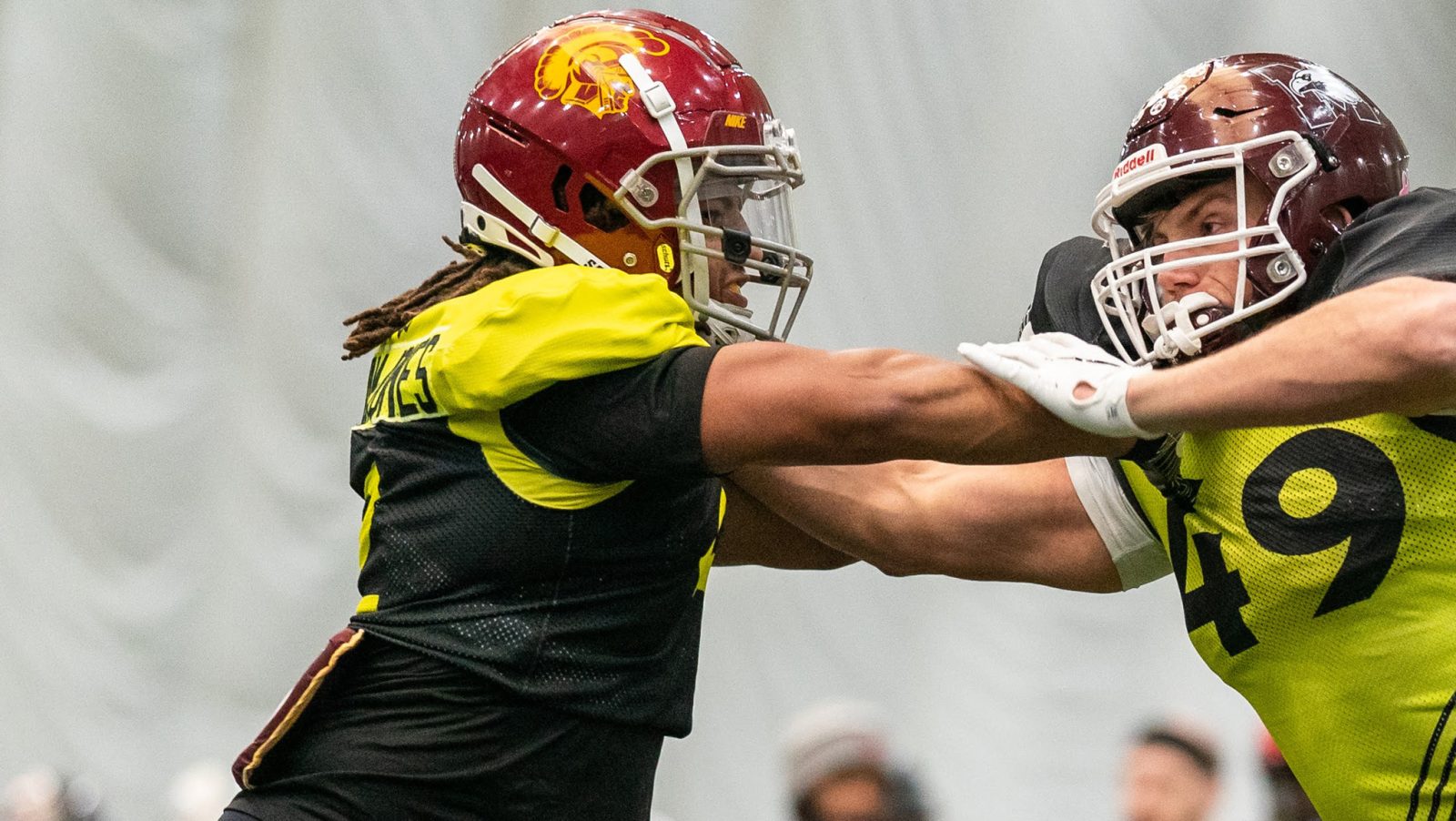 While the CFL Global initiative has understandably taken some time to find its footing outside of German LB Thiadric Hansen and the odd specialist making a meaningful contribution, there is no denying that each and every global prospect carries much more than their pads, helmet and cleats to Canada. They pack stories of football exploration that raise an interested eyebrow each time their tale is explored.

At the 2022 CFL Combine presented by New Era no player is more interesting based on journey, life experience and endless potential as both a player and person than British born USC running back Samuel Oram-Jones.

One look at the global roster this weekend and you quickly notice only a small handful of participants come from schools you recognize. Defensive back Edris Jean-Alphonse of Laval, offensive lineman Nour-Eddine Seidnaly from Arkansas State and defensive lineman Noke Tago from Oregon State chief amongst them.

Then you see that logo. The one Reggie Bush wore while winning the Heisman trophy, the one Junior Seau and Marcus Allen made their name in and the one Keyshawn Johnson and Lynn Swann dazzled in before memorable NFL careers.

So how does a Brit find his way into the cardinal and gold of SC? Stunningly that’s not even the most impressive part of his journey. Before landing in sunny Southern California, Oram-Jones was a standout motorsport prospect competing with the likes of Charles Leclerc, Max Verstappen, George Russell amongst others who either currently, or will soon, grace the star-studded Formula One paddock as global heroes to millions of men, women and children alike for their daring exploits strapped into the most dynamic vehicles on earth.

Despite having the always important financial backing in the cut throat business that is high level European motorsport, it was decided for Samuel that his racing career would end at 18-years-old as education took precedence.

“I went from one day knowing I’m going to be a racing driver, everyone who was around me as an amateur is now doing it professionally,” he said on Friday. “I look at the top 10 in the last event I ever did, Callum Ilott was on pole. He’s in IndyCar now, I was second, George (Russell) was sixth or seventh, Lando (Norris) was the class below. It was just the reality that it wasn’t going to be the case for me. It was a very sharp reality and I was lost, I had always been identified as a sportsman and now people said I was or I used to be. I didn’t know what to do. I’m still not over it.”

A quick sit down with Samuel Oram-Jones will quickly impress you – or your favourite CFL teams’ evaluators – with his positivity and willingness to embrace the journey of life, which is exactly how he began the process that led to this weekend in Toronto.

“I had a numb feeling because I couldn’t believe that my racing career came to an end as quickly as it did,” he said. “I very quickly went looking for a sport I could replace the energy and vigour I put into racing with when I began to attend Durham University.”

At Durham Oram-Jones walked on, worked his way up the depth chart and scored the winning touchdown in the 2018 British championship game. With his stock slowly, but steadily rising he attended an identification camp in Ohio before beginning to research which NCAA Division One schools offered the best academic fit for him, with sport once again coming a close second in importance.

“It’s so hard to get into Vanderbilt,” Oram-Jones admitted. “There’s no team in the SEC that is even close to what’s required at Vanderbilt. I got a masters degree from the top ranked financial mathematics degree in the world, the added bonus was I got to call myself an SEC running back.”

Sensing that his football opportunities would be limited at Vanderbilt following spring practices and with his degree completed, Oram Jones entered the mysterious transfer portal where he relentlessly harassed every Division One coach, recruiter and quality control coach for a chance.

“It’s not all fun and games never hearing back from anyone if you did not play high school football in the United States and you don’t have some stars next to your name on 24/7 Sports or Rivals,” he said. “Eventually USC called after a rash of injuries and offered me a chance to practice with the team all year and that’s all I needed to hear before I began to pack my bags.”

Sadly that fall Oram-Jones would break his leg and be forced to miss the remainder of the already complicated 2020 COVID altered Pac-12 season, but once again he smiled through the adversity with the ever-likeable Milton Keynes accent and was back on his feet well before 2021 Spring camp. This past fall he was named USC’s Co-Offensive Service Team Player of the Year for his efforts on the practice roster. An often thankless role consisting of being a tackling dummy for monster five star recruits in any attempt to give the program a better look at their weekly opponent.

Maybe, just maybe, with a good performance this weekend in the tests and on the field Samuel Oram-Jones could finally get some validation for his journey.

“It’s been a long road to get to this point,” Oram-Jones said. “Recognition of getting drafted would be nice but truly I think the process of the whole thing is what I am most fortunate for, to have lived it and done it. I can be happy if I get a call in a few weeks time but I’m really thankful to be here.”

Formula One prospect, double masters degree holder, a bright future in finance and a football journey from British university to iconic USC. Samuel Oram-Jones is the most interesting man at the 2022 CFL Combine and you can watch him chase his dreams live on CFL.ca.

Good luck not cheering for him.