There are plenty of ways for CFL prospects to endear themselves to those in control on draft day.

Carving out an extreme niche strength, despite perceived weaknesses in other aspects of their testing or on-field acumen is one. Another is being a freaky tester, even if it means finishing the weekend with an underwhelming turf session.

There is no better way to increase your likelihood of drawing increased attention than being well-rounded as an athlete and football player, but Syracuse’s Tyrell Richards added a new layer to the conversation this weekend at the CFL Combine presented by New Era in Toronto.

Be an elite athlete with a strong Sunday in helmets AND do it at multiple positions over a five hour stretch.

Many other players improved their draft stock, all of which I’ll examine through our annual stock watch and Mock Drafts here on CFL.ca in the coming weeks, but Richards taking more reps than anyone else at the Combine at multiple positions piqued my interest as Chris Jones sat close by laser focused on the every move of what I believe to be his first overall pick on May 3.

While Richards didn’t take reps as a true defensive back, he did take special teams reps with defensive backs and controlled many of the defensive line and linebacker snaps he took, including those in pass coverage against speedy backs such as Queen’s Rasheed Tucker and Saskatchewan’s Adam Machart.

All of this was after he posted elite linebacker numbers, which led me to wonder what his athleticism would look like when judged against all defensive backs or defensive lineman at CFL Combines – Regional and National – since 2001. Thanks to my archive, I punched in Richards’ weekend performances compared to all three positional groups to give you a sense of the full spectrum of his athletic appeal. 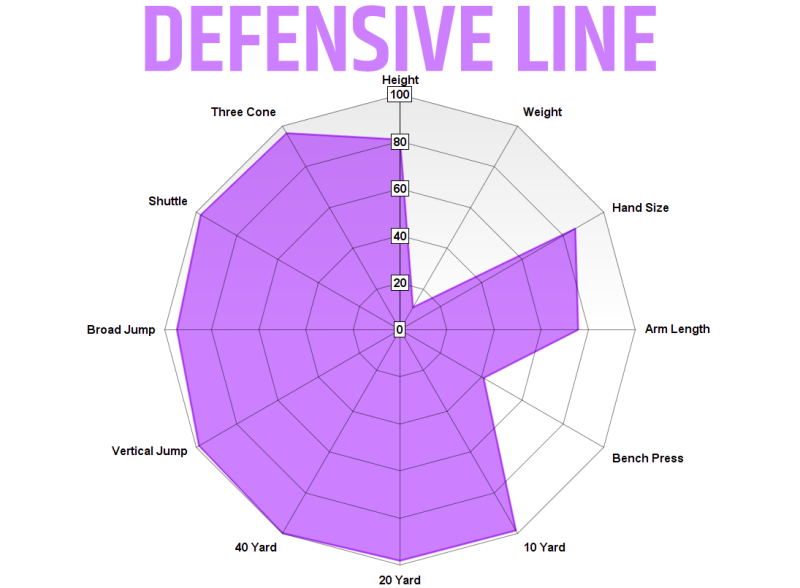 Closest to the ball and judged against defensive tackles and bigger bodied defensive ends, Richards is an underweight defensive lineman while still maintaining well above defensive line average percentiles in physical measurables such as height, hand size and arm length.

Every other test from speed (40-yard) to lower body explosion (vert, broad) and quickness (shuttle, three cone) are all amongst the best we’ve ever seen for a defensive lineman at a CFL Combine. Under the assumption that a team won’t ask Richards to dramatically alter his body, this means he likely won’t be an every down line player anytime soon, but it does mean he quickly becomes one of the more tantalizing pressure creators off the edge on second down passing situations. 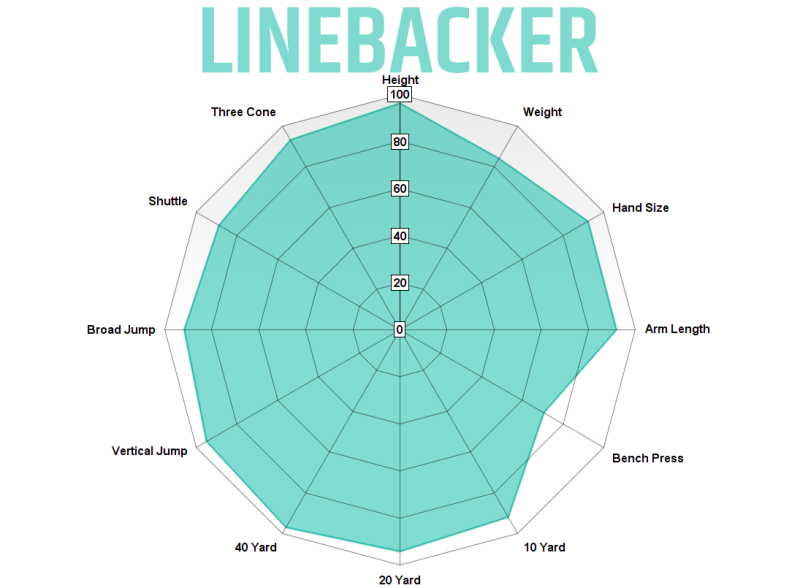 In his natural position of linebacker, Richards’ weight is no longer under represented as it was against lineman. His bench press number (19 reps) also becomes more than respectable given the positional competition. Impressively for being one of the biggest backers we’ve ever seen, his speed, explosion and quickness scores show little drop off from the all-time elite status reached against defensive lineman.

This is where Richards will call home and projects as a special ratio changer immediately much like 2020 first overall pick, LB Jordan Williams of the BC Lions, who just collected the 2021 Most Outstanding Rookie award. 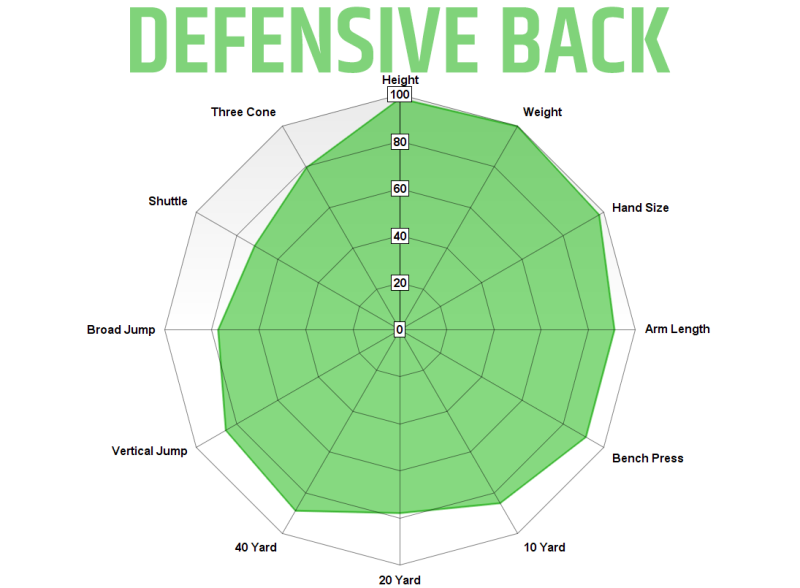 While Richards won’t line up consistently as a defensive back anytime soon – unless Chris Jones drafts him and gets creative – I wanted to punch his testing metrics in and see how little drop off athletically would occur.

As expected, Richards quickly becomes the largest “defensive back” ever judged at a CFL Combine, but his testing numbers stay hovering around the 80th percentile which would qualify as a special defensive back testing day, while his bench number jumps into elite status with some of the longest arms on record for a defensive back.

The historic versatility of @CuseFootball‘s Tyrell Richards was on full display over the weekend. Here’s how his athleticism stacks up against all-time #CFLCombine DL, LB and DB’s.

The moral of this story? Richards just had one of the best weekends regardless of designation. If asked by a team to transition to any position outside of maybe boundary corner – but never say never – Richards could do it, which means not only scheme versatility, but ratio flexibility and that opens the entire roster up from week to week.

Don’t count on a player with this build, skill-set and unique playability lasting to the second overall pick. Especially with Edmonton’s Chris Jones, the ultimate fan of those characteristics, holding the top selection.