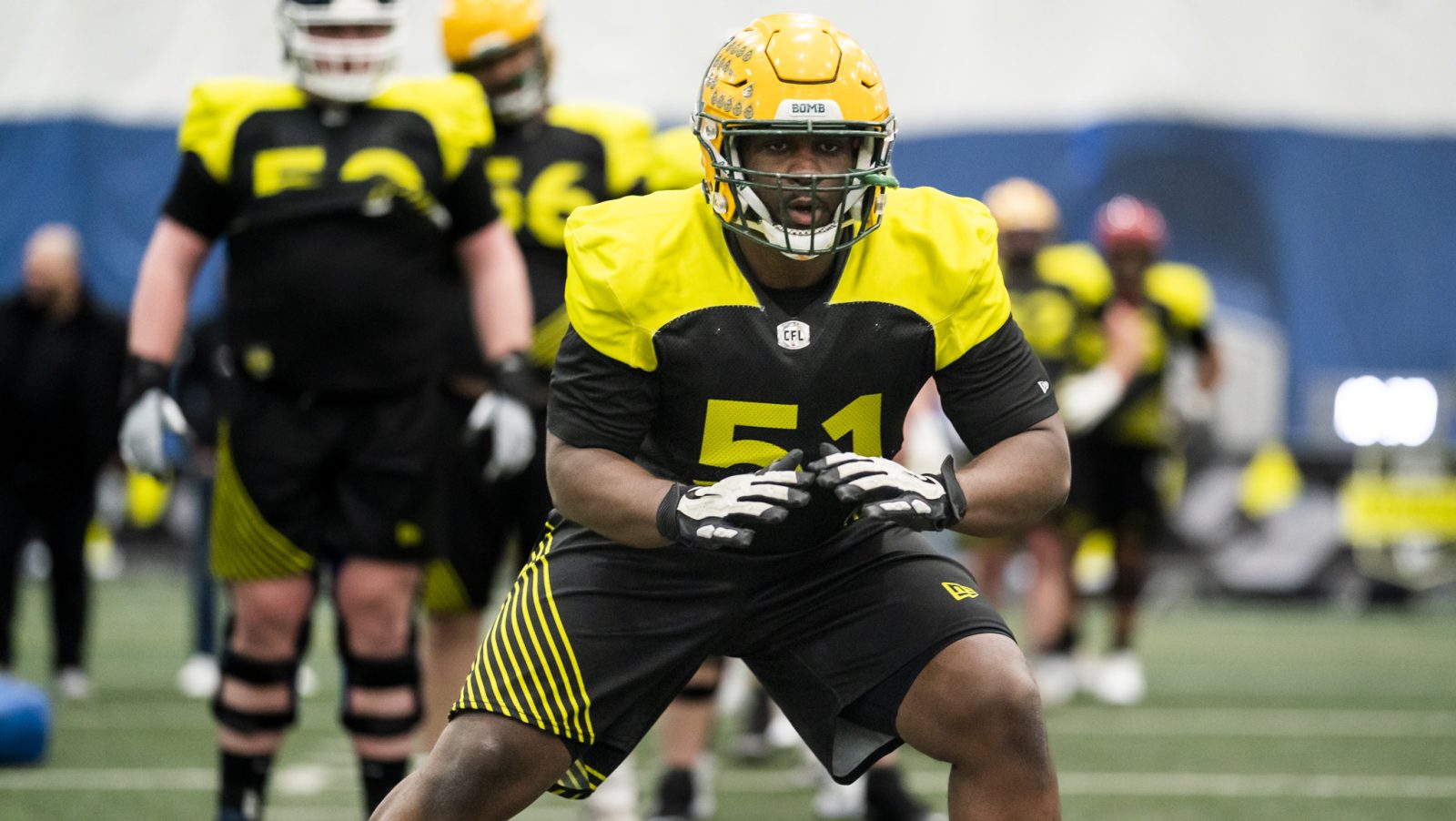 Every year as I have the pleasure of covering the CFL Combine for CFL.ca I appreciate getting to put a face to the names of U SPORTS and NCAA prowess that will define draft day.

In watching players move through drills, athletic tests and even in the hallways of hotels or between drills on field, I’ve enjoyed more each year the chance to draw relatable comparisons for CFL fans just beginning to understand who these rookies are.

While the comparisons below are strictly based on testing metrics and athleticism over playing style, it’s amazing how often there is overlap in a chicken or egg discussion between game play and physical characteristics. 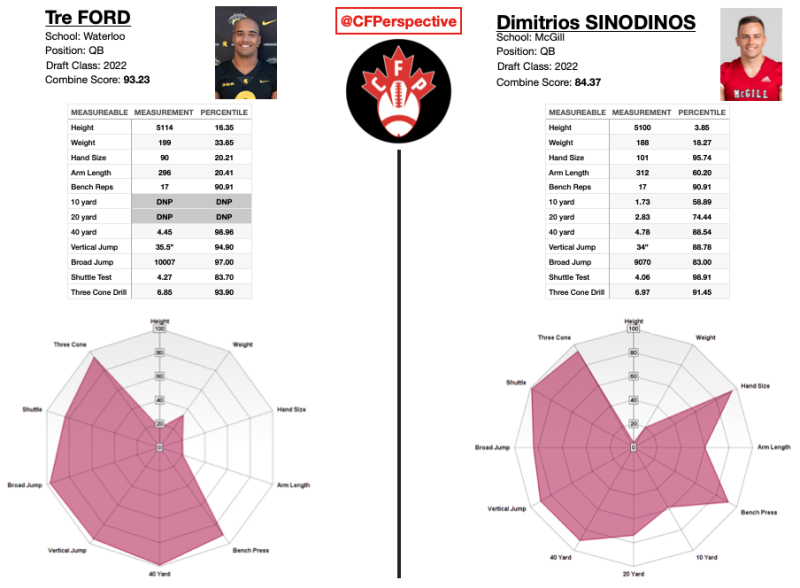 I’d love to give you a comparison of Ford but the honest truth is that it doesn’t exist. Ford is the best athlete ever tested at a CFL Combine, Regional or National, since 2001 with the closest comparable being McGill’s Dimitrios Sinodinos, who tested just weeks ago at the Eastern Regional Combine.

What really makes Tre an anomaly is his lack of size and how he defies the odds to jump higher and lift more – 17 reps at 225 pounds is absurd for someone below 200 pounds. He will get a chance at quarterback here in the CFL but the question will remain if he can consistently make reads and throw with accuracy against professional defenCes without having to exclusively rely on his unheard-of speed and open field creativity. 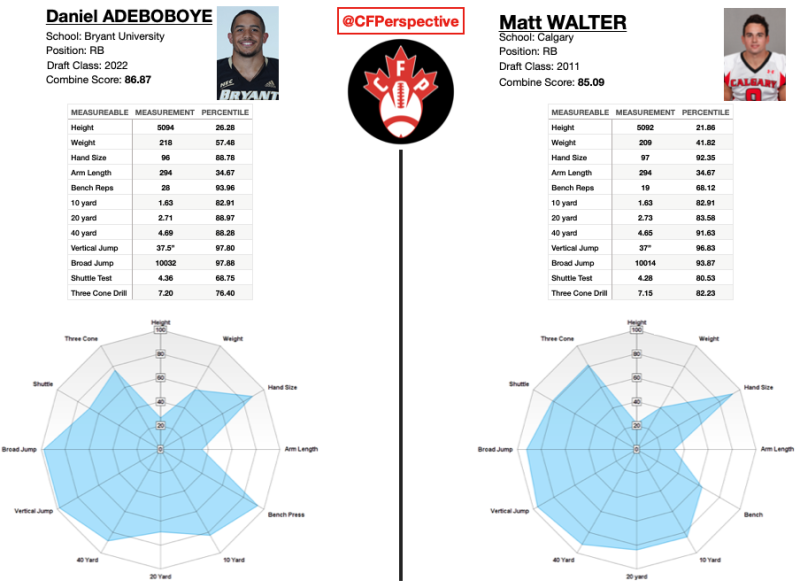 Adeboboye announced his presence at the CFL Combine Saturday night with 28 reps on the bench press and didn’t look back from there. At 218 pounds, he is a thick, lower body dominant runner similar to Matt Walter who starred on special teams and in spot duty behind Jon Cornish in Calgary. 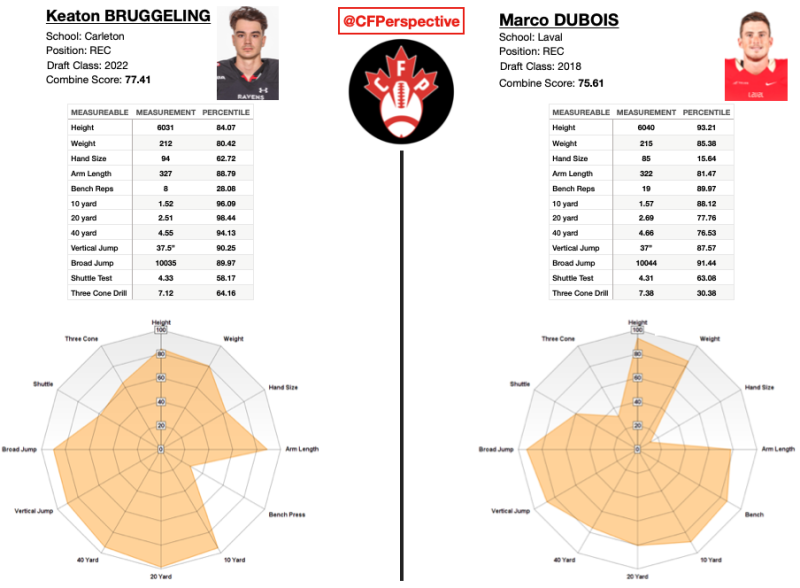 Entering the combine I wondered whether Carleton’s Keaton Bruggeling or Toronto’s Maksim Duric would exit Toronto as this spring’s big man of fascination. After a dominant testing performance it is unquestionably Bruggeling, who will jump up draft boards and receive a plethora of extra calls in the lead up to May 3.

His player comparison is athletic Laval alumni, and current REDBLACKS special teams ace, Marco Dubois. If Bruggeling develops on specials anything like Dubois projects he’ll have a long, healthy career. 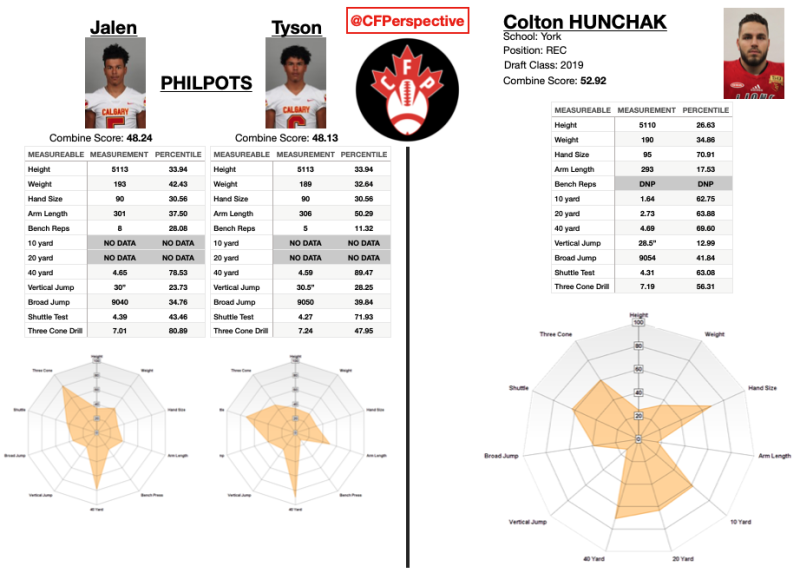 Based on production, film and projection heading into the combine there are absolutely no concerns here, but I was surprised the Philpots didn’t have a better weekend testing.

It’s worth remembering here that numbers are just that, numbers to be used in the overall process, but when you compare their very similar testing performances you land amongst names like Mitch Hillis, Justin Chapdelaine, Colton Hunchak and Mitch Picton. None of which received hype remotely close to the Dinos dynamic duo.

The question now becomes whether teams are given a reason to pause on potential cause for concern or blow off the numbers because they feel so strongly about the big picture in what has suddenly become an incredible case study in drafting methodology. 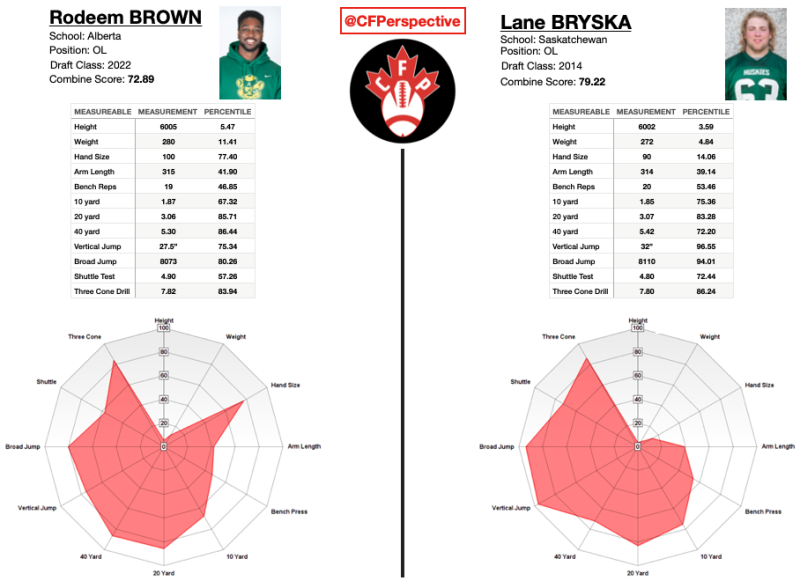 Perhaps no single player at the 2022 CFL Combine helped himself more – relative to his starting point – than Alberta’s Rodeem Brown. Brown ranked 58th of 318 all-time offensive lineman tested and no player his size or smaller ranks higher.

Current Saskatchewan Huskies line coach Lane Bryska was the closest relative comparison I could find after plenty of digging to give the best visual, but Brown is another of many 2022 draft intrigues. 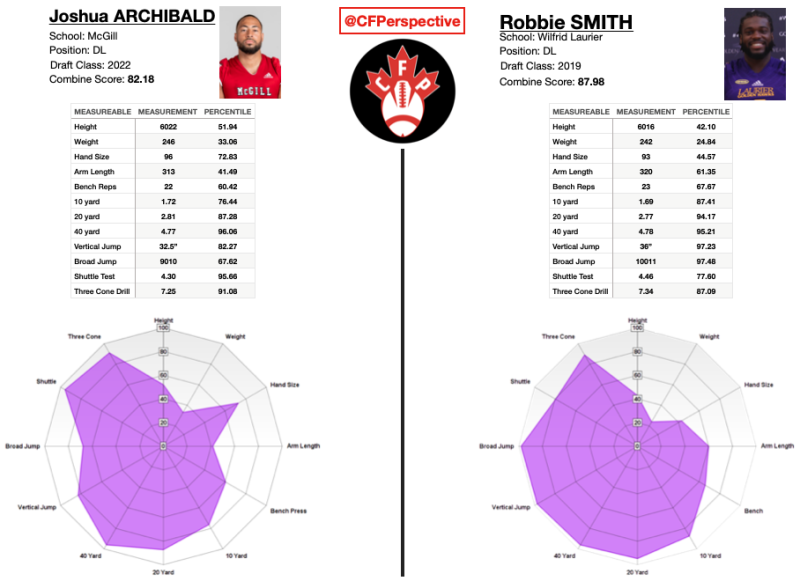 With much talk about Western’s Deionte Knight, Queen’s Anthony Federico and the Saskatchewan duo of Nathan Cherry and Riley Pickett, McGill’s Joshua Archibald quietly put together the best overall weekend of testing and played solidly in one-on-ones to support his draft day argument.

The athletic comparable is Laurier alumni Robbie Smith who has settled into a strong role with the Toronto Argonauts through two seasons in Double Blue. 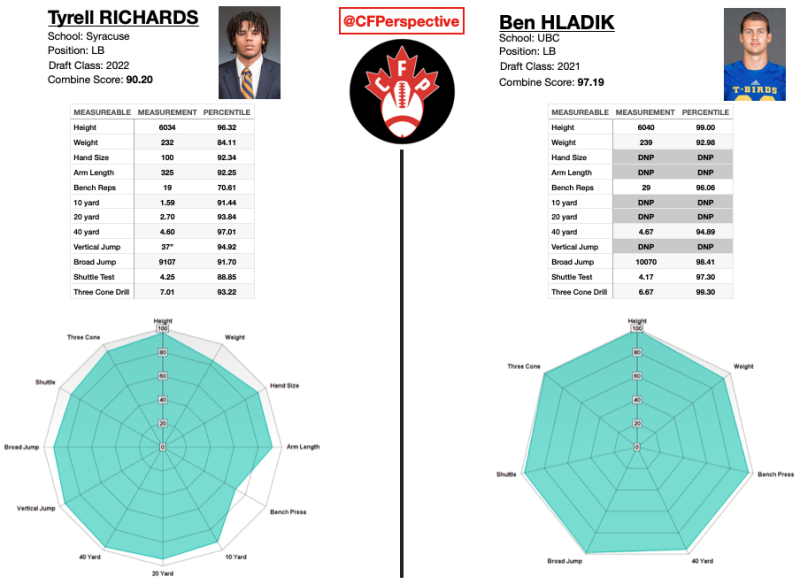 The versatility of Syracuse’s Tyrell Richards is unmatched, making a true comparable next to impossible. The only player of his size to show the type of well-rounded athleticism Richards posted in Toronto this weekend is 2021 third round pick of the BC Lions Ben Hladik, whose testing numbers were completed virtually. 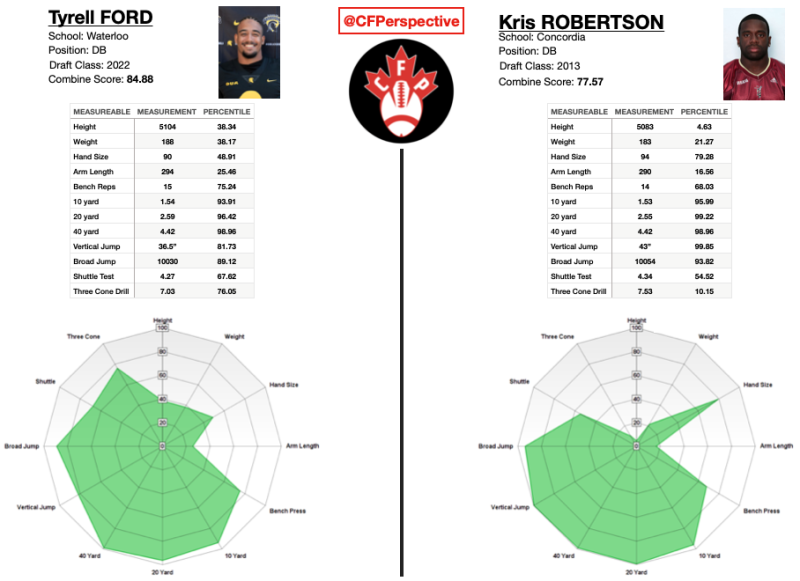 While brother Tre held up his end of the bargain, Tyrell attacked every drill to land amongst the elite of defensive back CFL Combine history. With a blazing 4.42 40-yard dash lowering his pro day time and an impressive 15 reps on bench while weighing 188 pounds, Tyrell might be undersized relative to all-time DB combine competitors but he’ll never be out classed athletically.

Back in 2013 Kris Robertson from Concordia posted a similar weekend at a smaller size before pursuing other professional paths.