TORONTO — From a childhood spent on the track to becoming a Formula 1 racer, to the early years of adulthood chasing a football dream across the Atlantic, Samuel Oram-Jones is still wrapping his head around how it all happened. The British running back is happy the journey has taken him to this point, though.

“I was a racing driver most of my life growing up and then randomly at 18, I decided to take up football at university,” Oram-Jones told CFL.ca at the CFL Combine presented by New Era.

He went from being a McLaren junior racer to a walk on at Durham University in England and then through sheer determination and a relentless hounding of the coaching staff, moved to USC. He missed out on the 2020 season thanks to a broken leg, but was named USC’s co-offensive service team player of the year in 2021 for his contributions on the practice roster.

That whirlwind journey has now landed him at the doorstep of the CFL, with the Global Draft coming on May 3. 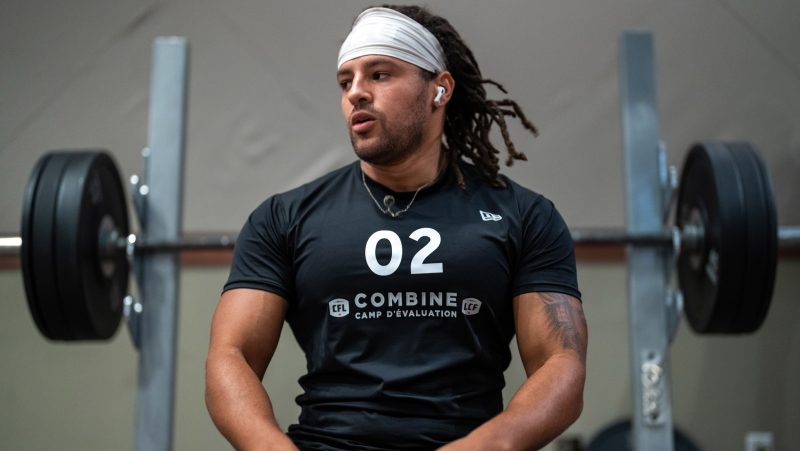 Samuel Oram-Jones, seen here at the bench press at the 2022 CFL Combine, is hoping to land with a CFL team in the Global Draft on May 3 (Kevin Sousa/CFL.ca)

“I had a numb feeling because I couldn’t believe that my racing career came to an end as quickly as it did,” Oram-Jones told CFL.ca’s Marshall Ferguson at last month’s combine.

“I very quickly went looking for a sport I could replace the energy and vigour I put into racing with when I began to attend Durham University.”

At five-foot-six and 195 pounds, Oram-Jones ran a 4.91-second 40-yard dash, hit 18 reps on the bench press and showed a 29-inch vertical leap at the CFL Combine. Should he get the call that he’s hoping for on draft day, he’ll simply check the box for the next step in his career and readjust his goals.

“There is nothing more that I want to do than continue playing football at the highest level,” he said.