O’Leary: Richards, Adeboboye ready for the next level together

O’Leary: Richards, Adeboboye ready for the next level together

It was a moment about as Canadian as you could find: Two CFL-bound prospects catching up after having worked out together at last month’s CFL Combine presented by New Era.

Tyrell Richards, the Brampton-raised linebacker that sat at No. 3 in the spring edition of the CFL Scouting Bureau’s rankings, and Daniel Adeboboye, the running back from Toronto that debuted on the list at No. 12, seeing each other for the first time since they faced off in one-on-ones in front of their respective future CFL employers.

The conversation still went to the place that it will for just about any Canadian, especially at this time of year. The two talked about the recent snowfall that Toronto and the GTA had gotten. The consensus the duo quickly reached was one that many would land on across the country: mid-to-late April is not an appropriate time for snowfall in Canada.

When they were joined by reporters, the topic quickly changed to how the updated Scouting Bureau rankings were good news for both players.

MORE CFL DRAFT COVERAGE
» View: 2022 CFL Draft order
» Mock 1.0: What will Edmonton do with the first overall pick?
» The Art of the Steal: 10 hidden Draft gems 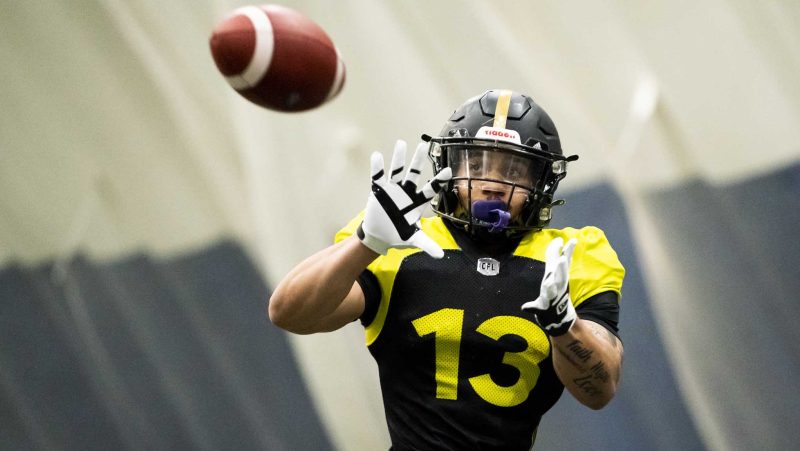 Bryant University’s Daniel Adeboboye used a strong showing at the CFL Combine to be the only running back in the CFL Scouting Bureau’s spring rankings (Thomas Skrlj/CFL.ca)

“To be honest, I don’t really pay attention to the list all that much,” Richards, who played at Syracuse, said of his move up one spot from the winter rankings.

“It’s cool to be on there and it is a great honour. But at the end of the day, I’m just working to be the best player I can be. Doesn’t matter where I end up on somebody else’s list, it’s where I am in my own personal training and making sure I’m ready for camp.”

Adeboboye benefitted from a strong performance at last month’s combine. The Bryant University product turned heads and generated chatter enough to go from unranked to that No. 12 spot. He’s the only running back on the 20-man list.

“My agent actually sent me the list,” he said. “I think my dad also sent it to me, but I’ve been working out all morning, so I haven’t really seen it. So I’m not really sure where I am on the list but apparently I’m on the list. So I mean, that’s that’s definitely a good start.

“I’m just training and focusing on the future and whatever happens, happens. It’s an honour to be recognized and I’m really just waiting and working to see where I land.”

It’s a funny byproduct of a hyper-competitive situation like a combine, that relationships form out of an environment where everyone is technically your rival. That’s what happened with Richards and Adeboboye, who were familiar with one another and share mutual friends through football, but hadn’t actually spent time together until they both arrived in Toronto last month.

“When we met up at the Combine it was kind of like I already knew him,” Richards said of Adeboboye.

“I feel like getting all those reps, we gained another level of respect for each other. It’s cool, being able to go through this and now having people that I know going through it with me.” 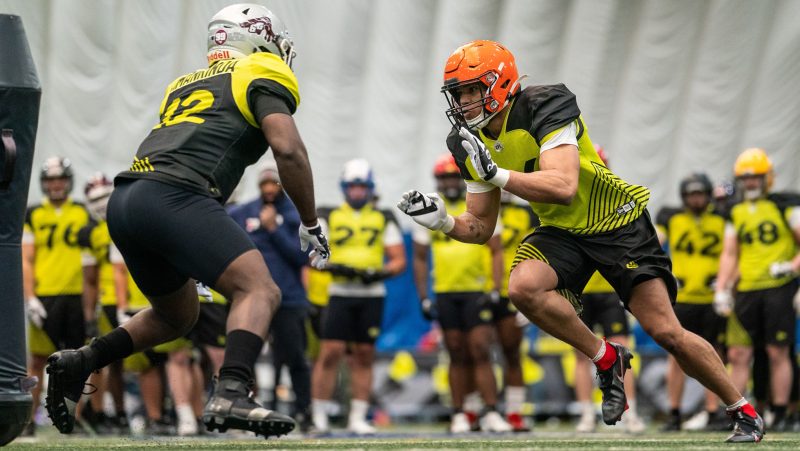 Tyrell Richards’ strong showing at the CFL combine moved him up one spot to No. 3 in the CFL Scouting Bureau’s spring rankings ahead of the CFL Draft on May 3 (Kevin Sousa/CFL.ca)

When the CFL Draft arrives on May 3, anything could happen. Richards and Adeboboye could end up on the same team, or this could be the start of a friendly rivalry that sees two competitive faces crossing paths for years to come.

After showing great versatility in his one-on-ones, working out with the d-linemen and linebackers — he lamented not getting a few reps in with the defensive backs — Richards has been suggested as an obvious fit with Chris Jones. The Edmonton Elks hold the No. 1 pick and Jones, a defensive guru that loves a versatile body in his schemes, may have found his ideal player when he saw Richards work out.

“It would be an amazing thing to be part of just going first overall, especially to Edmonton,” Richards said.

“It would be cool but at the same time it doesn’t change what I’m going to do once I get drafted. It doesn’t change how I prepare for things. I went into the combine preparing a way and I’ll go into camp preparing that same way. Whether I go first or 60th, to me it really doesn’t matter. I just want to be out there playing football.”

Adeboboye said that he thought his versatility — he’s comfortable catching the ball, running it or blocking in the offence — will help him at the CFL level, wherever he ends up playing. He likes the idea of being the next great Canadian running back, after watching the likes of Jon Cornish, Jerome Messam and Andrew Harris all carve out their spots in the game over the past decade-plus.

“I saw guys like them paving the way and I was like, you know, maybe I can do that,” Adeboboye said.

“I still feel like I can be like them. They paved the way and hopefully I can carry the torch and get that chance to prove that Canadians can play running back just as well as Americans if not better.”