EDMONTON — If there were a vibe-measuring tool in CFL stadiums in 2021 — let’s call it a Vibe-ometer for our purposes — the feedback from Edmonton wouldn’t have moved its imaginary needle very much. If you’re a longtime CFL fan, that should feel strange to you, no matter who you cheer for.

The Elks are a team and organization that for many, many years have been considered the flagbearers of the CFL when it comes to things like on-field success, community engagement and fan satisfaction.

After a 3-11 season that felt like it had the bottom fall out of it near the midpoint, that mythical Vibe-ometer would have recorded a less-than-immaculate reading by season’s end.

The good news in Edmonton is that it’s an organization awash in change. After a dismal season, there’s hope in the Alberta capital that things are headed in the right direction. We’ll start there as we dive into five things that you need to know about the Elks for the 2022 season. 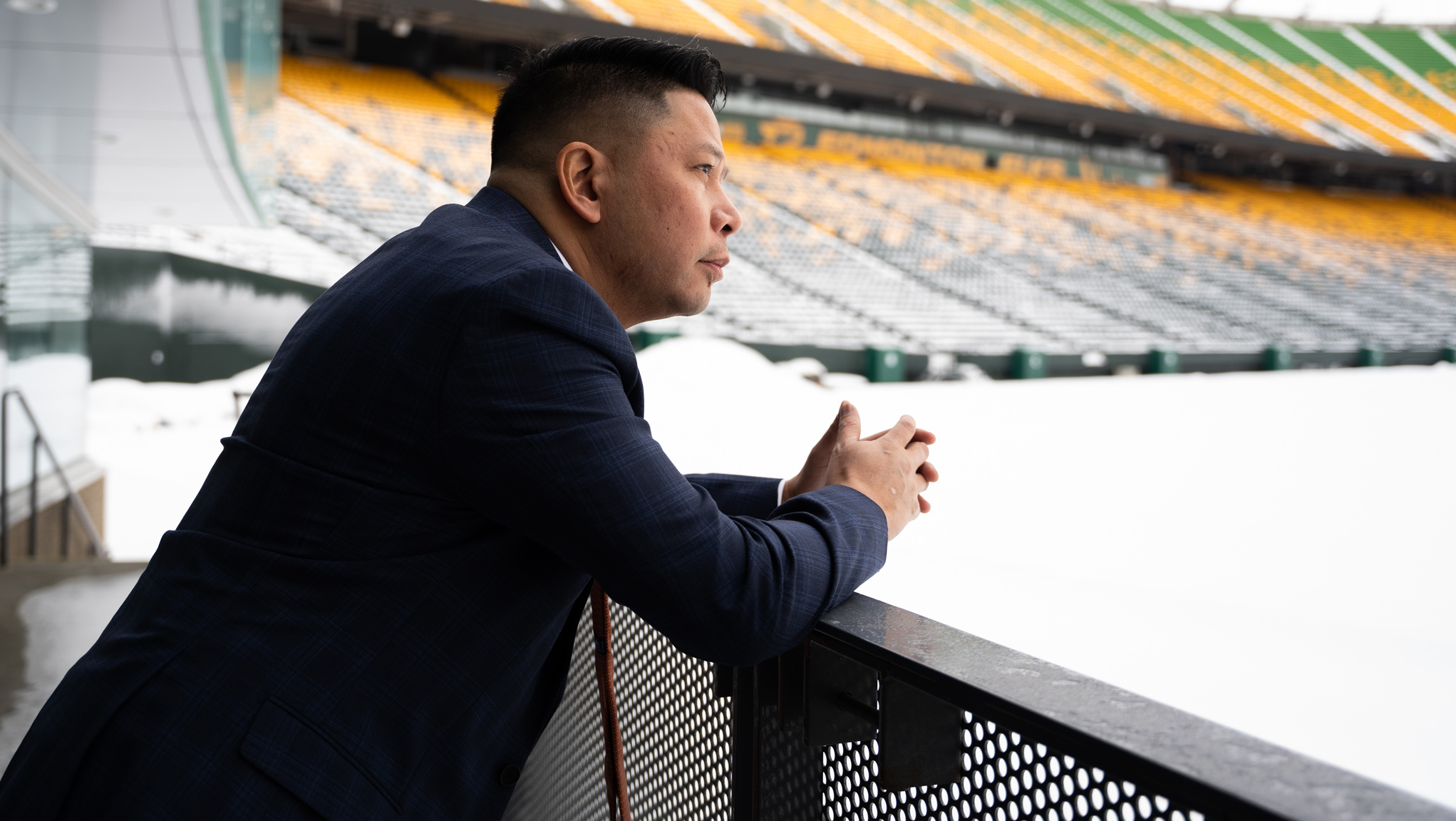 Victor Cui came in as the Elks’ president and CEO in January and has injected some new life into the organization (GoElks.com)

In the wake of a very difficult season, the Elks made wholesale changes, first hiring Chris Jones as their head coach and GM. Jones of course won a Grey Cup with the Elks in 2015 – his first ring in just his second year as a head coach – before abruptly taking the coaching job and a bigger title in Saskatchewan. Going on seven years since that departure, Jones seems thrilled to be back in Green and Gold and has been busy putting his stamp on the roster.

Jones is renowned for his ability to find the perfect players for his complex and demanding defences. It took a little time, but he showed in his three seasons in Saskatchewan that he could build a dangerous team that was in the hunt for a Grey Cup. It may not happen overnight in Edmonton – though big season-to-season turnarounds are very much a CFL thing – but fans can be confident that they have brighter days ahead on the field of Commonwealth Stadium.

Off the field, the team has a new president in Victor Cui. Normally, these types of moves are recognized when they happen and few and far between after. Cui is breaking that trend. The Edmonton-raised architect of an internationally successful mixed martial arts outfit returned home to take this job and has brought a Ted Lasso-like energy to it over the last four months. He’s rallied a downtrodden fan base and seems to have injected a positive energy into the organization itself, knowing how to handle problems that sometimes technically aren’t even his.

There are no guarantees of on-field success, but the Elks seem to have gotten two very important off-season hires right. That bodes well for the team’s future.

When it comes to the on-the-field stuff, the biggest question that hangs over the Elks involves their quarterback. Nick Arbuckle was on the roster when Jones put his name to paper with the Elks, a late-season trade pickup made by former GM Brock Sunderland. The CFL off-season is a long one, providing Jones ample time to name Arbuckle his starter for 2022. He hasn’t done that. Instead, Jones has repeatedly insisted that training camp will be an open competition for that starting QB job. With seven quarterbacks on the roster at the moment, that camp battle should be an intense one. Arbuckle is the most experienced of the lot, with Taylor Cornelius claiming the next-most experience, having taken the offence when Trevor Harris was traded to Montreal last year. The most important position on the field will be decided in May. The Elks’ training camp might be the most interesting one to keep an eye on this year.

Whoever ends up with the QB1 job at the end of May will have a talented array of hands extended in front of them, all calling for the ball. Kenny Lawler will be at the top of that list. The 27-year-old led the league in receiving in 2021 and was the sole player to crack the 1,000-yard receiving mark in last year’s 14-game regular-season. A back-to-back champion with the Winnipeg Blue Bombers before making the move to Edmonton in free agency, Lawler brings big play ability, championship experience and a new energy to a team that will lap that up. 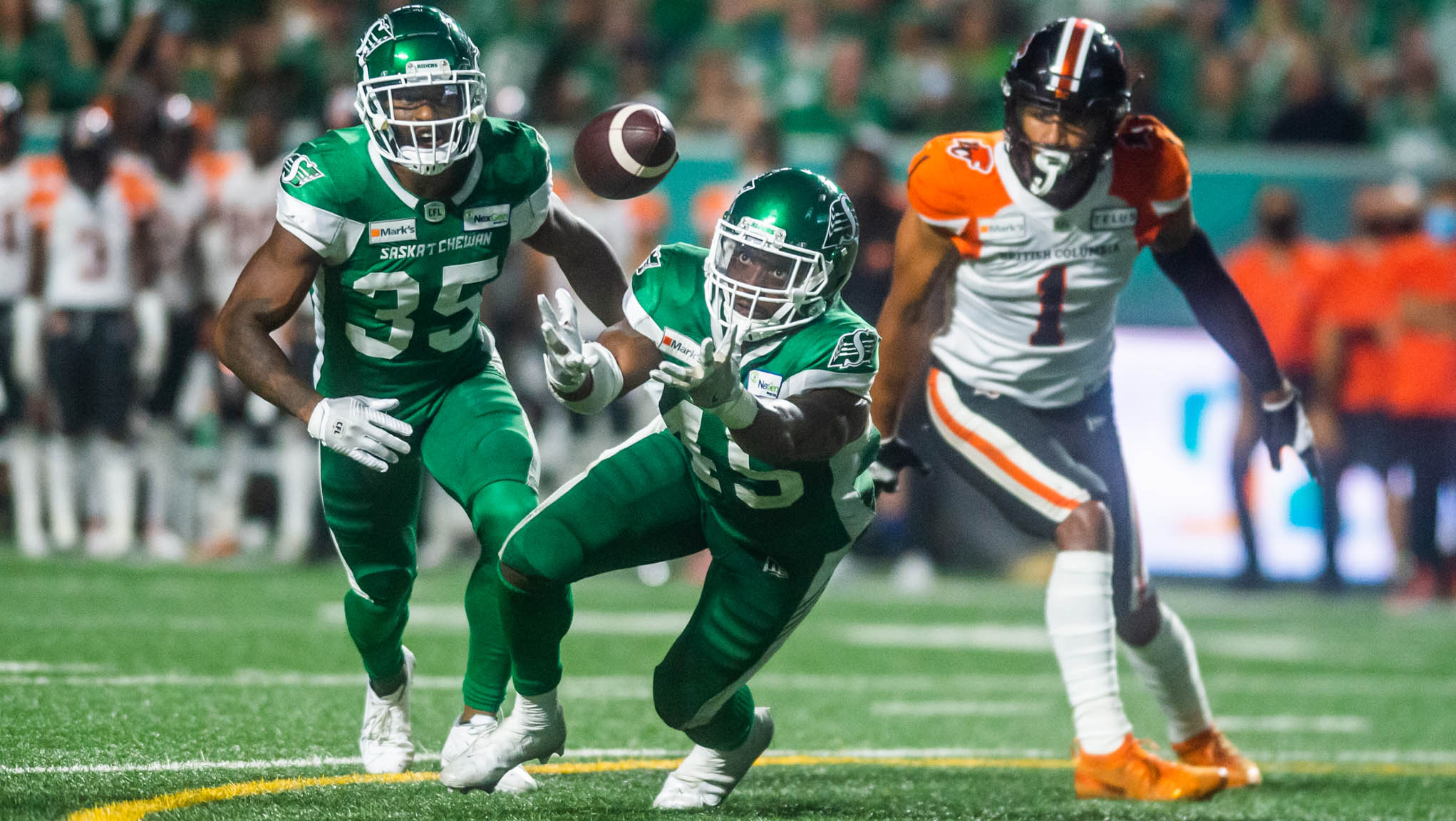 Deon Lacey showed he can play meaningful reps at linebacker last season in Saskatchewan. He returns to Edmonton, where he launched his career as a standout special teamer (Matt Smith/CFL.ca)

Whenever a new head coach or GM comes in for a team, they have players that have worked well for them in the past that they often bring with them. With Jones taking both titles in his return to Edmonton, we’ve seen him bring in a lot of his guys. We’ve mentioned the ties he has to his coaching staff already. On his roster, we’ve seen something similar.

Jones traded for offensive tackle Tony Washington, getting him from Montreal in January for DL Mike Moore. He signed DB Mike Dubuisson, who, like Washington, was a part of the Grey Cup-winning Elks team in 2015, but had been out of the CFL since 2018. Jones picked up another member of that 2015 Elks team when he signed LB Deon Lacey in free agency. Jones was a fan of LB Tobi Antigha’s adaptability from their two seasons in Saskatchewan together (2017 and 2018) and he signed him in free agency as well.

One of the most interesting moves that Jones made over the winter was bringing in Emmanuel Arceneaux. The two haven’t worked together before, though they just missed each other in Saskatchewan by a month when Arceneaux signed there in 2019. The 34-year-old receiver didn’t play last season but the two-time CFL all-star and three-time West Division all-star has racked up 8,418 yards through nine seasons. If Arceneaux can still offer the Elks something, it’d be a nice boost for a team that was lacking in offence in 2021.

The mountains are a good three-plus hours away from Edmonton, but the special teams unit has one to climb locally and it’s taking on its own mystique the longer it remains unscaled.

The last time that Edmonton scored a return touchdown was on Aug. 28, 2015, when Kendial Lawrence took an Argos’ punt back 64 yards for the score. Your quick math isn’t wrong here. Edmonton is going on seven years without one of the most crowd-pleasing plays that the game can offer.

Of course, the cancelled 2020 season sits in that drought, so if you cut out those 365 days, the streak will sit at a tidy 2,115 days when the Elks open their season on June 11 in BC. Martese Jackson — a very good returner in this league — makes his second stop in Edmonton this season and will get another opportunity to finally put this streak to bed.