In the Books: Trades help shape an exciting ’22 CFL Draft

In the Books: Trades help shape an exciting ’22 CFL Draft

TORONTO — A trade shook things up the morning of the 2022 CFL Draft, but it didn’t change an outcome that many felt was inevitable.

Tyrell Richards was in fact the first overall pick of Tuesday night’s draft, which many observers felt was a foregone conclusion based on the defensive versatility that he flossed at the CFL Combine presented by New Era. The twist came in just who was the most impressed with what he showed.

Montreal Alouettes’ general manager Danny Maciocia coveted Richards more than anyone else and was willing to part with the draft rights to a promising offensive lineman to get him. Elks GM and head coach Chris Jones swapped picks with the Als, taking DB Enock Makonzo fourth overall, while potentially adding Montreal’s 2020 pick, Carter O’Donnell. 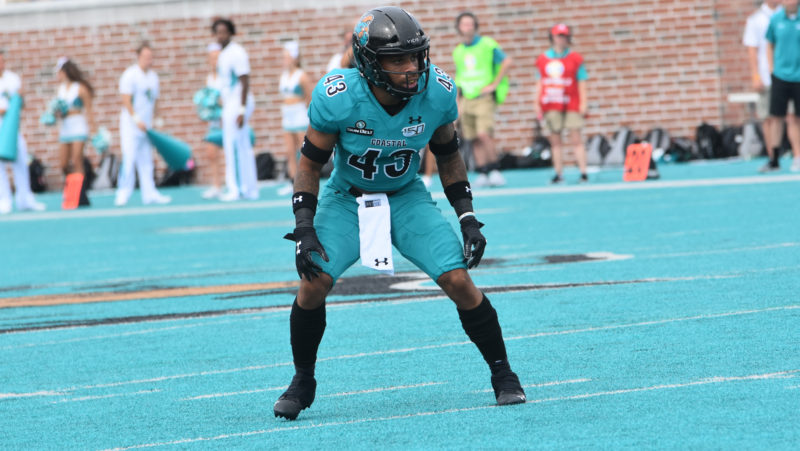 “He’s a very outstanding player. He’s very versatile and he had a lot of success at Syracuse,” Jones told TSN after the Elks had completed their first round work. “(Richards) is a good guy. We talked to him a bunch of times on the phone, we sat down a few times. He’s going to do nothing but do good things.”

With Makonzo, Jones sees a versatile player that will play well under a new rule that’s coming in this season.

“He’s built like a SAM linebacker,” Jones said of Makonzo, “but with them bringing the hashes in, essentially, your WILL linebacker and your SAM linebacker are very similar players. He’s going to be able to fit into what we do, both at SAM and WILL.”

Jones used his other first round pick, acquired through a Monday night deal with the Hamilton Tiger-Cats, to take Waterloo quarterback Tre Ford. The 2021 Hec Crighton winner will get a great opportunity in Edmonton, where there isn’t a clear cut starter. He’ll also get the opportunity to work for a coach in Jones and an offensive coordinator in Steve McAdoo that love to use athletic QBs for set plays. Edmonton used third-string QB Jordan Lynch in that manner when Jones was the head coach in Edmonton in 2014 and 2015.

“He’s a guy that you can put in a lot of different positions,” Jones said of Ford. Certainly if he’s got the ball in his hands, he’s got a chance to affect the ballgame.”

On the other side of Tuesday’s blockbuster trade, the Alouettes made some distinct decisions with their picks. They got Richards’ versatility with the first pick, then via a Tuesday morning trade with Winnipeg, were able to get receiver Tyson Philpot with the ninth and final pick in the first round. With their second round pick, 18th overall, they chose University of Alberta offensive lineman Rodeem Brown, the six-foot, 280-pounder that was a first-team All-Canadian in 2021.

While Brown will return to the Golden Bears in 2022, Maciocia added two players in front of him that should be able to make an impact for their team this season. Als’ defensive coordinator Barron Miles will be thrilled to work with Richards and Vernon Adams Jr. should be happy early this season with the contribution he could get from Philpot. 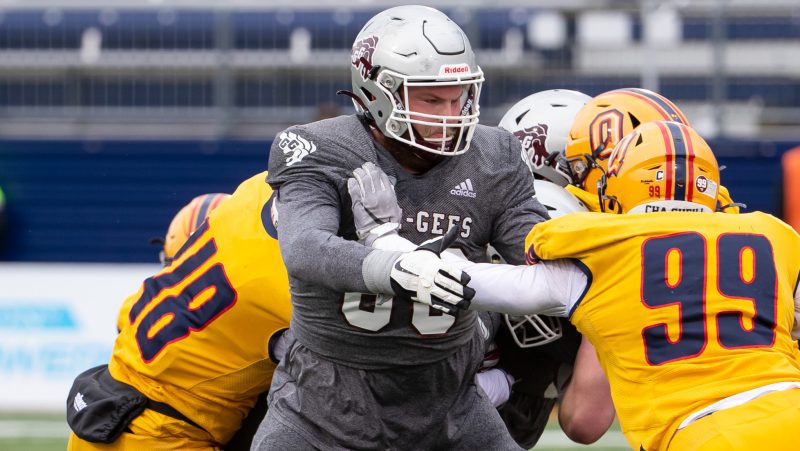 The REDBLACKS tried to stock the shelves on talented offensive linemen, using their first two selections in the draft on Zack Pelehos and Laval’s Cyrille Hogan-Saindon (Greg Kolz/Ottawa Gee-Gees)

Working his first draft as the Ottawa REDBLACKS’ GM, Shawn Burke was deliberate with his choices in the early rounds of the draft, taking Ottawa Gee-Gee o-lineman Zack Pelehos with the second overall pick. He added another o-lineman, in Laval’s Cyrille Hogan-Saindon with his second round pick. Those are two big investments in quarterback protection and ratio flexibility. If they work out the way the REDBLACKS’ brass hopes, they could pay off for the team for years to come.

Near the end of the second round a very good point was made on the TSN panel. The Hamilton Tiger-Cats had been quiet in arguably the most talent-rich portion of the draft, with their first pick at 17th overall. While the other eight teams in the league had made at least one pick by that point, we were reminded that Orlondo Steinauer and the Tiger-Cats’ war room was likely happy with where they were. The reason? In lieu of those early picks, they traded for two proven Nationals in LB Grant MacDonald and OL Kyle Saxelid.

The real hits and misses and winners and losers in this draft of course won’t be known for years. The earliest stages of evaluation are slated to start in a week, when rookie camps open and the 2022 CFL season kicks off.