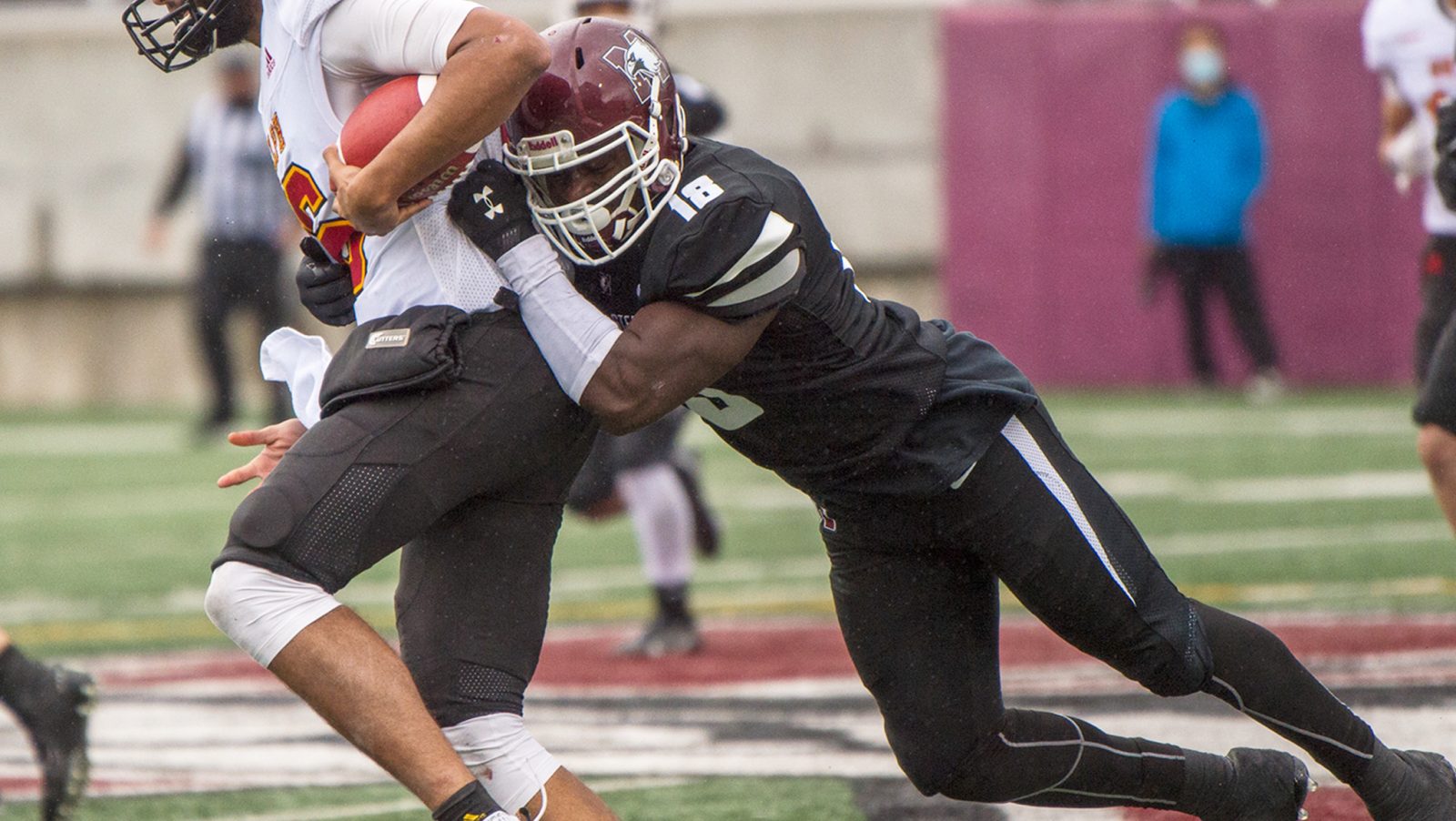 It’s hard to think of a more ridiculous yet rewarding sports moment like the Draft. On one end there is something so cool about seeing these young men get selected, having years of hard work and sacrifice rewarded with their entry into the CFL. I love the emotional element of the draft, especially seeing the shots of family getting to celebrate. It’s a reminder of the amount of work and dedication they contributed to their son’s journey to professional football.

Then there is the viewing experience of the draft.  I mean if you break it down, the entire construct of it is we watch one older man (Commissioner Randy Ambrosie) say the name of a younger man (Tyrell Richards) and then we are treated to instant analysis of this younger man by four other men who are in between the ages of the Commissioner and the player selected.

And you know what, I’m here for it every year, it never disappoints. I love watching Farhan Lalji, Duane Forde, Davis Sanchez and Marshall Ferguson break down every pick. As someone who has been a part of TSN for longer than I care to admit, I know all the work being done behind the scenes by so many football-crazy TSN employees.

I fully understand why people will look at me cross-eyed when I explain what I’m watching but I know I am not alone in getting excited when you turn on the TV and suddenly, boom: There’s football on your screen. It really is as basic as your brain going, “Hey look, there’s football players doing football things,” and you suddenly get that endorphin rush that comes with the realization that we’re not that far off from watching actual football games instead of combine highlights.

MORE CFL DRAFT COVERAGE
» A team-by-team look at the 2022 CFL Draft
» Richards the 1st: Recapping an eventful first round
» Mock 2.0: Revisiting after the CFL Draft

So, sticking with the theme of one sporting event that can both be life fulling and goofy all in one two-hour period, I want to highlight my favourite moments from the draft while mixing in some thoughts about the Toronto Argonauts’ night.

Let’s start with the beginning of the draft. Of course the first thing we see is Edmonton Elks’ head coach and general manager Chris Jones! From a news perspective it makes sense, as he helped orchestrate the big pre-draft trade sending the No. 1 overall pick to Montreal for the 4th pick and the rights to OL Carter O’Donnell. But let’s be honest, Jones is there because of the “you just never know” factor. If we’re all being honest with ourselves, we all get a little extra pep in our step when we see Chris Jones suddenly appear on our screen.

An early highlight is Marshall Ferguson confidently pronouncing “Gananoque” when discussing the Ottawa REDBLACKS’ second overall pick, Zack Pelehos and hearing Davis Sanchez giving a complimentary “umm” in the background. That is not an easy word to say. No way would I have attempted to say the name of Pelehos’ hometown on live TV. Hell, when making my notes I wrote “Zach” instead of Zack so I would have been a disaster. I just loved that Davis gave the universal sound for “good for you” in that moment, acknowledging the degree of difficulty pulled off by Marshall.

A CFL draft isn’t official until we get beamed into TSN Football Insider Dave Naylor’s home for his intelligent small and big picture thoughts on the proceedings. However, I have one question. Just how old is that box of Fantuz Flakes that is always positioned at the lower left side of the screen on his bookshelf? Is there still cereal in that box? Is it stale or is it so packed with so many chemicals that it is just as good now as when he got it? Technically that box could be a dozen years old as this special brand of cereal came out in 2010 as part of a Saskatchewan Roughriders’ promotional campaign.

Soon after Naylor and his breakfast food leave the screen, we have our first twin of the night going off the board, with the Calgary Stampeders going local and selecting University of Calgary standout wide receiver Jalen Philpot. It makes sense to continue to surround Bo Levi Mitchell with as much talent as you can.

The Philpot family were the go-to “lets put a camera on these prospects” for the first round, as both Jalen and twin brother Tyson were expected to go high. The family did a great job not looking nervous, not scratching anything that should not be scratched in public and from what I could tell the Philpot brothers were only drinking water which is commendable as it looked like the family was in a bar.

A quick shoutout to their entire family as their dad Cory, who has been out of the league since 2000, but looks like he could still convert a couple second-and-shorts and their mother Colleen, who Tyson gives so much credit to, saying in a Calgary Sun article: “She’s been the real grinder, so we definitely get it from her as well. She’s a motivation for us, for sure.”

Right after Calgary it was time for Toronto to draft so let’s switch over to some thoughts on the Double Blue. Toronto made the less splashy but correct pick in OL Gregor MacKellar. We all saw it coming as this is the fourth time in the last five years Toronto has taken someone to help on the offensive line.

I’m not going to try and fool you that I watched a ton of St. Francis Xavier University football, so I won’t break down MacKellar’s ability to slide protect. What I like about this choice is that it meshes with the Argonauts’ busy off-season.  The biggest free agent signing was Andrew Harris, that rare workhorse back who you can feed the ball 15-20 times a game. The Argonauts are not going to be that team that throws the ball on 14 of their first 15 scripted plays, so going after a giant (322 pounds) offensive lineman who has been described as “nasty” by football minds far smarter than me makes a ton of sense.

Also, MacKellar looks like a rookie police officer with a lot of potential judging strictly by his picture on the St. Francis Xavier website.

At the top of the second round, Toronto certainly got value with Western Mustangs’ defensive linemen Deionte Knight. I know he is good value not because of what Duane Forde said (though you should always listen to Duane) but rather what the sportsbooks said.

Going into the draft, Knight was +400 to be taken first overall but instead fell to No. 10. The reason is an obvious one, much like betting on the CFL Draft, this pick is a gamble as Knight has been invited to both Washington and Tampa Bay’s NFL rookie camps.

This is a worthy risk by GM Michael ‘Pinball’ Clemons and the entire Argonauts’ scouting department. Yes, there is a chance Toronto will not have the services of Knight to start the 2022 season and maybe years beyond, but you’re getting the 2021 J.P. Metra Trophy winner as the Most Outstanding lineman of the year in Canadian college ball. Deionte put up big numbers and was a big part of Western winning the Vanier Cup.

What I like about running back and 15th overall pick Daniel Adeboboye was his growth as a pass catcher at Bryant University, an American private school in Rhode Island. I know all the attention may fall on the fact that he led all Canadians with 28 reps of 225 pounds on the bench press at the CFL Combine presented by New Era, but my eyes perked up when I read that he was third on his team with 29 receptions this past year, compared to 20 total catches in his first 24 games at Bryant. Toronto does not need an every down back, but a national who can be a change of pace for Ryan Dinwiddie should be a natural fit.

Finally, I have no idea if McMaster DL Enoch Penney-Laryea will stick in Toronto, but he is an easy player to cheer for. This is a player who oozes leadership. A captain with the Marauders, Penney-Laryea choose to come back for his senior season despite having to wait out COVID suspending all university football and he had already gotten his degree. As for an interesting backstory, he has interned with the United Nations in their Industrial Development Program and is working as a drug strategy coordinator with an independent health care provider, Marchese Health Care.

I love the draft, it’s always a blast … but now let’s get to training camp.