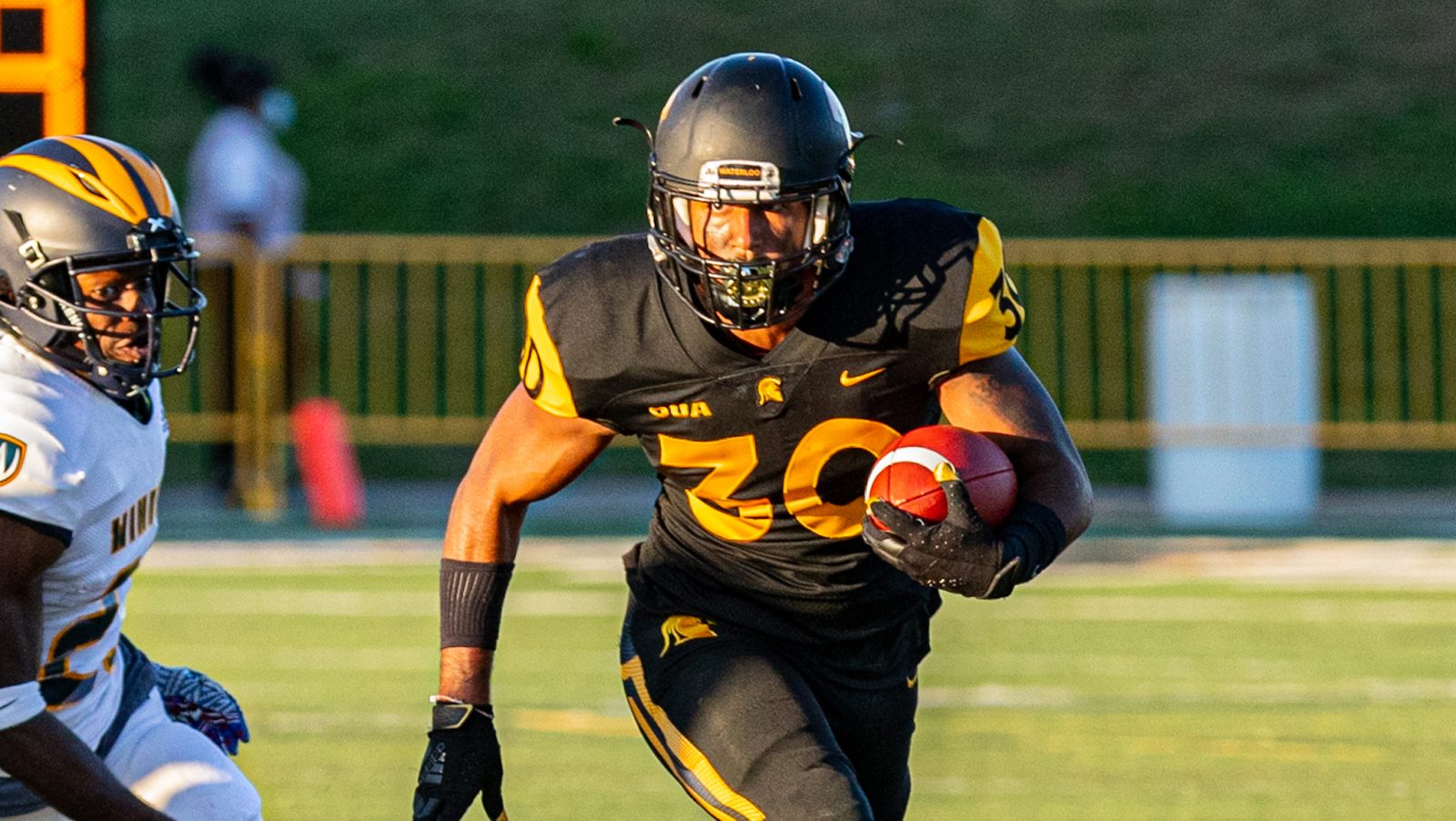 They are the two-time Grey Cup champions, a team built around talented Canadian starters and surrounded by homegrown depth.

And the Winnipeg Blue Bombers only added to that foundation further at the Canadian Football League Draft Tuesday night with the addition of six players – led by Waterloo defensive back Tyrell Ford – while trading for another earlier in the day in a deal with the Montreal Alouettes that landed promising defensive tackle Cameron Lawson.

MORE CFL DRAFT COVERAGE
» A team-by-team look at the 2022 CFL Draft
» Last Man Up: Burtenshaw thrilled as final pick in the Draft
» In the Books: Trades help shape an exiting ’22 CFL Draft

The deal for Lawson – Winnipeg sent its first round pick, ninth overall, and its second round pick, 18th overall  – for the Queen’s University product and the 13th overall selection, with which they grabbed Ford.

Ford, whose twin brother and quarterback Tre was selected eighth overall by the Edmonton Elks, is an exceptional athlete who posted the fastest 40 time at the National Combine at 4.42 and has NFL mini-camp invitations from the Pittsburgh Steelers and New York Jets.

“The biggest reason I love football is I love to compete,” Ford told CFL.ca at the combine. “Especially as a corner I love the one-on-one, where it’s just you against the other person. I love being in that situation and being able to stop that person from catching the ball and proving that I was better in the matchup.”

It should be said the Bombers’ approach to the draft was essentially shaped by what happened in the hours and days ahead of the proceedings.

Two picks from the 2021 draft class – offensive lineman Liam Dobson and defensive back Patrice Rene – reappeared on the club’s radar. Dobson opted out of his USFL contract with the New Orleans Breakers as he couldn’t attain a work visa. He’ll attend mini camps with the Chicago Bears and New Orleans Saints and could very well now be in Winnipeg for training camp next week. Rene, meanwhile, had been delaying signing with the Bombers as he waited to see if he could land a deal as an undrafted free agent. He’s now talking with Winnipeg about a contract.

The possibility of Dobson being in camp and the deal for Lawson addresses the club’s needs along the offensive and defensive lines, and Rene and Ford help augment the Canadian depth on defence and gives the club possibilities at the safety position as all-star Brandon Alexander continues his rehab from a knee injury suffered in the Grey Cup.

The Blue Bombers then bolstered the rest of their Canadian content by selecting five more players – four on defence, one on offence – including homegrown Cole Adamson, a product of the University of Manitoba and another Oak Park High School grad, along with Ottawa defensive back Chris Ciguineau, Guelph defensive tackle Jeremy Kapelanski, Carleton defensive back Cedric Lavigne and Queen’s fullback Konner Burtenshaw.

Here’s a more-detailed look at the newest Bombers:

Notable: Ford finished 2021 with 12.5 tackles, one interception and two pass breakups in five games. A two-time U SPORTS Second-Team All-Canadian, he also is a kick-return specialist.

Why he’s a good fit for the Bombers: The Bombers have the Hallett Bros – Nick and Noah – along with Redha Kramdi and Malcolm Thompson as Canadian DBs. Ford’s athleticism means he could contribute right away on special teams and give the club another return option along with Janarion Grant. 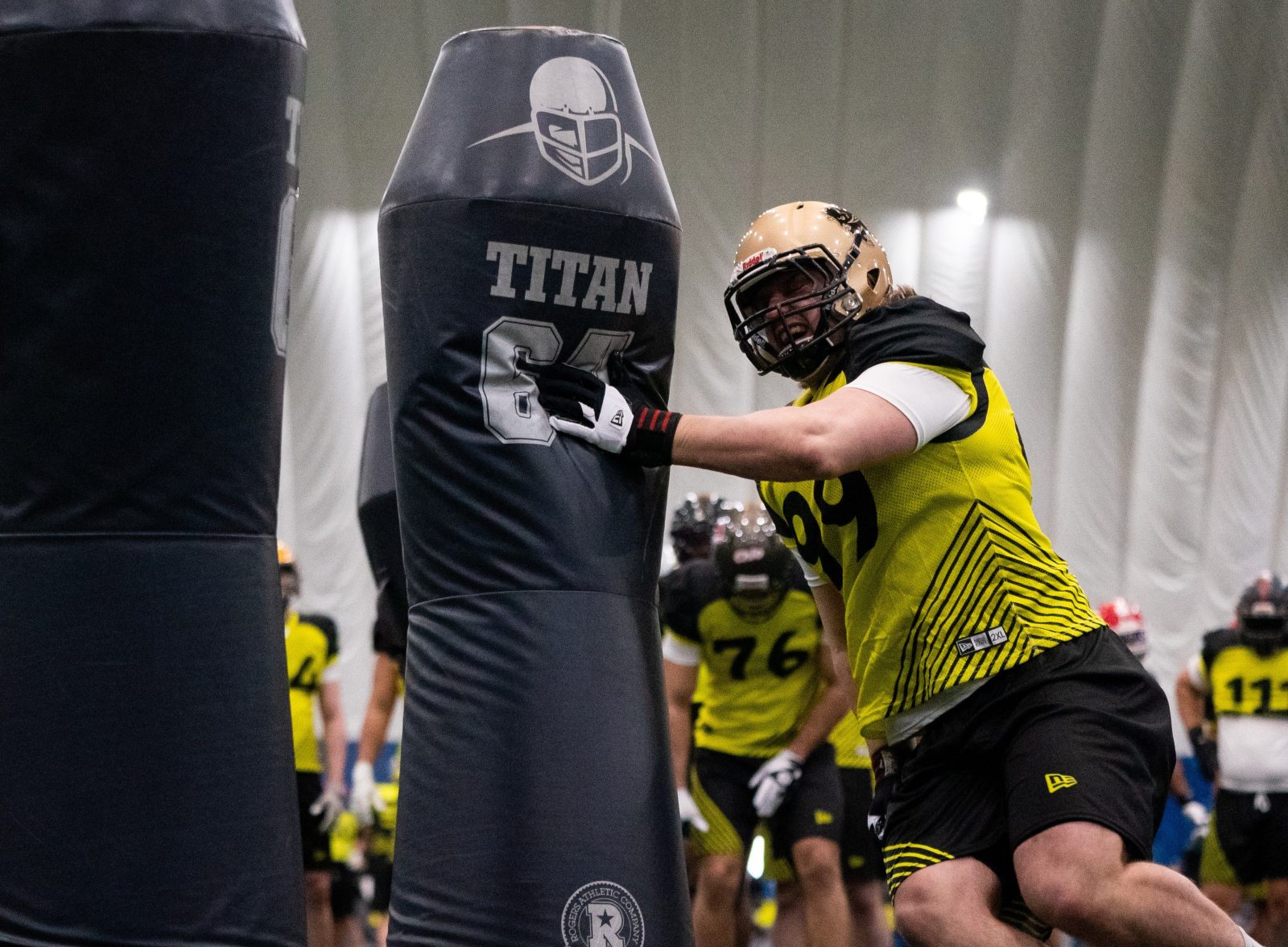 When he’s finished school and ready to make the leap to the CFL, Cole Adamson will bring tenacity to the Bombers’ defensive line (Kevin Sousa/CFL.ca)

Notable: Was a Canada West all-star in 2021. Gifted athlete who carries his weight well on his frame. Another product of Oak Park High School, who was also the starting centre on the school’s AAAA basketball championship team in 2017. Engineering student who plans to return to school this fall.

Why he’s a good fit for the Bombers: The Bombers lost Jonathan Kongbo to the NFL’s Denver Broncos and with the trade with Montreal to land Cameron Lawson and the selection of Adamson they’ve found some young depth to learn from veteran Jake Thomas.

Notable: Popped out at the Eastern Regional Combine, earning an invite to the National Combine. A converted receiver with good height at 6-3, he fits into the ‘best athlete available’ approach at this stage in the draft. First played soccer before switching to football.

Why he’s a good fit for the Bombers: Lots of potential here to help contribute on special teams.

Why he’s a good fit for the Bombers: Just more potential depth for the secondary and on special teams.

Notable: A beast on special teams at Queen’s where he was the school’s top special-teams player in 2019.

Why he’s a good fit for the Bombers: Said to be tough as nails and there’s always room for players with that kind of toughness on special teams.

Notable: Hackett was twice named the winner of the Ray Guy Award (2014, 2015) as the top punter in the NCAA. He was a three-time All-Pac-12 1st Team All-Star (2013-15) and was named to the Pac-12 All-Century Team. Signed as an undrafted free agent by the New York Jets in 2016 and then waived when the team re-signed QB Ryan Fitzpatrick. He founded Tom Hackett Punting in 2018 – where he teaches Australian rugby-style punting – and has worked as a host on ESPN radio and in TV in Salt Lake City and co-hosts a podcast ‘Dadtastic’ about being a father.

Notable: Was one of 13 players invited to the NFL’s International Pathway Program this spring. Had 28 tackles and five pass breakups last year for Laval. In his three seasons with the Rouge et or had 73.5 tackles, three quarterback sacks, 10 pass breakups and one interception. Was a member of Laval’s 2018 Vanier Cup championship team. After moving to Paris from the Ivory Coast, Karamoko played flag football and later played for the French National Team at the 2017 World Games.

Notable: Played one season of junior college at City College of San Francisco and was ranked the top punter in juco. Spent the next three years at Arizona State, the last two as the Sun Devils primary punter. Joined Iowa as a graduate transfer in 2019 and handled the punting duties for all 13 games. Named an All-Big Ten Honorable Mention in ’19. He was an electrician in Australia and worked with ProKick Australia – as did Hackett – which earned him his first opportunity in San Francisco.