New-look Elks hope to turn things around in ’22

New-look Elks hope to turn things around in ’22

EDMONTON — When the Edmonton Elks were limping their way to a 3-11 finish on the 2021 season, you could smell the change coming through the cold, central Alberta air.

What followed — a Little House on the Prairie finale-style organizational blow up — was as thorough as anyone could have expected. The team went into December looking for a new team president, general manager and head coach.

Given where the roster sat at the end of the season and with the hiring of Chris Jones for the latter two roles, the rebuild has been steady and thorough across the roster. That can make exercises like the one below difficult, but fun tasks to embark upon.

Let’s start with the most obvious talking point with this team as it stands. 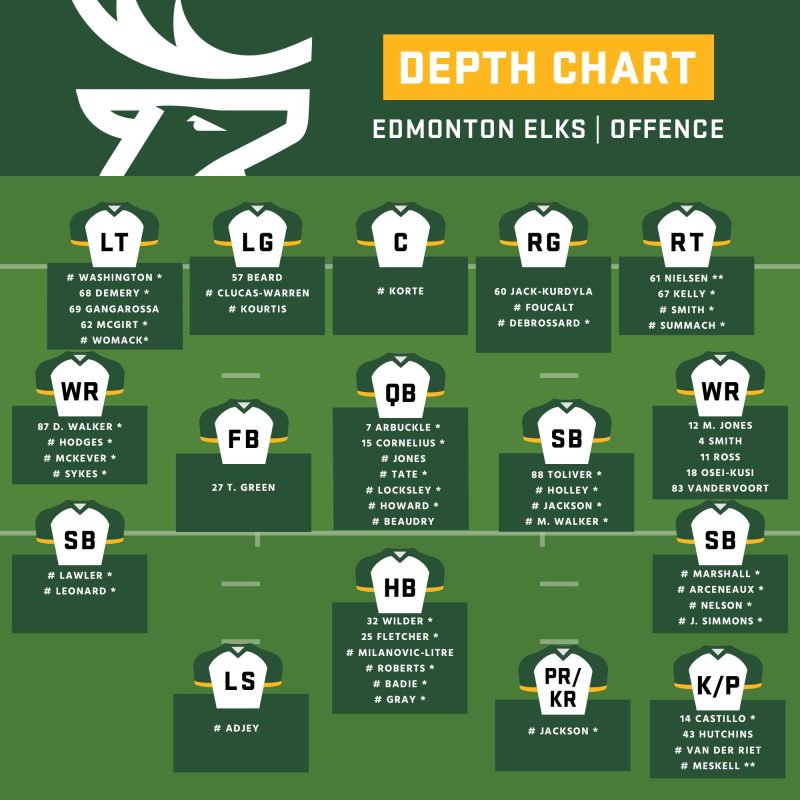 Look at all of those quarterbacks.

Jones has stated repeatedly this off-season that the starting QB job will be an open camp battle. When you look across the league at this time of year, Edmonton might have the most intriguing training camp because of this.

Nick Arbuckle looked like a bona fide starter in 2019 when he was filling in for an injured Bo Levi Mitchell in Calgary. He showed flashes of that in Toronto last year, before injuries sidelined him and eventually saw him dealt to Edmonton. With the Elks’ season essentially lost when Arbuckle arrived, the former regime decided against putting him on the field.

Taylor Cornelius became the Elks’ starter after Trevor Harris was shipped off to Montreal. The 26-year-old had his moments through nine games, but also took the lumps that any first-year CFL QB would in that situation. He should push Arbuckle for that No. 1 job.

Behind those two sits a heavy mix of interesting talent. Ohio State’s Cardale Jones (who replaced an injured J.T. Barrett on the Elks depth chart on Friday) and Arizona’s Khalil Tate, along with Keon Howard, Kai Locksley, National Mike Beaudry and 2022 first-round pick Tre Ford all deserve a good look from the Elks’ staff.

There’s a similar logjam of talent at the running back spot, though James Wilder Jr. is the likely starter after being a bright spot in the team’s dismal 2021 campaign. Walter Fletcher had some strong moments last season and former Stampeder Ante Milanovic-Litre will bring a strong veteran presence.

Whoever wins that starting QB job will have some talented targets in front of him. Kenny Lawler sits atop that list. The top receiver in the league last year, Lawler is coming off of back-to-back Grey Cup wins with Winnipeg and no doubt has big goals after racking up 1,014 yards and six touchdowns in 13 games last year.

Next to him is veteran receiver Derel Walker, who is well known in Edmonton for his part played on the Grey Cup-winning team in 2015. Walker has gone over the 1,000-yard receiving mark three times in his career but had a disappointing 531 yards in 11 games last year. With a career best of 1,589 yards in 2016, Walker will be looking to get back to those productive days this year in Edmonton.

The Elks’ offensive line got an upgrade in free agency this year and a strong sprinkling of local talent at the same time. Former University of Alberta Golden Bear Mark Korte returned home and should have an immediate impact this year. He’ll work alongside another former Bear, in David Beard. Elks fans will fondly remember Tony Washington from the 2015 Grey Cup squad. The Elks allowed 39 sacks last year, sitting at sixth in the league. QB protection and run game facilitation will be a key for this group this year.

We’ll throw in a special teams note at this point: While we don’t normally include this year’s draft picks in off-season depth charts, the Elks will need a long snapper after releasing Zach Greenberg this week. Barring a free agent signing ahead of camp opening, we’ve thrown third-round pick Peter Adjey into service here. 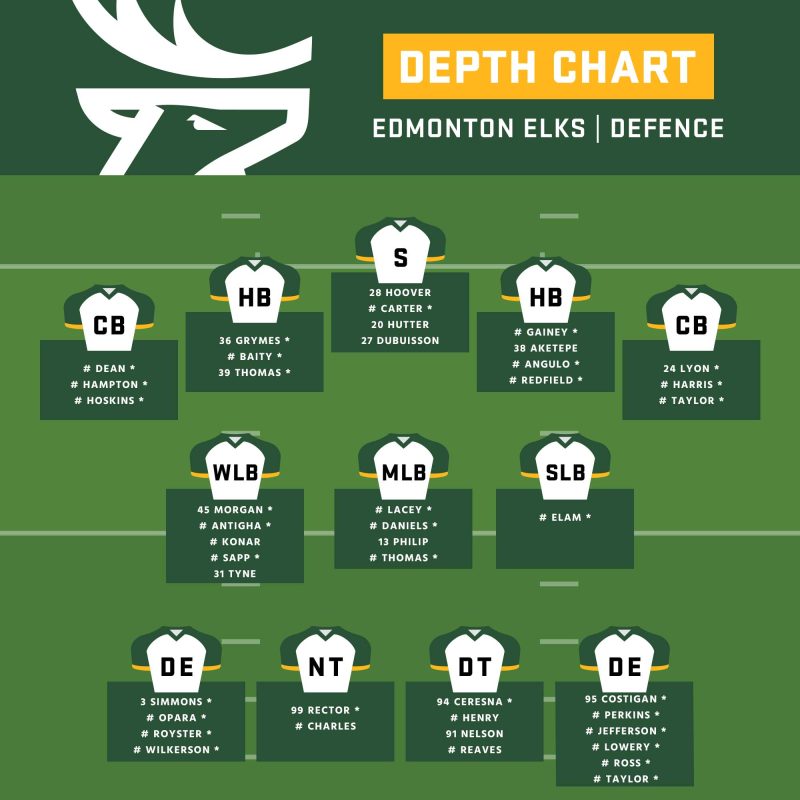 The Elks have some familiarity on their defensive line, with Thomas Costigan, Jake Ceresna, Christian Rector and Antonio Simmons (who came over in the Trevor Harris trade) all back.

Nyles Morgan will get the chance to build on his impressive rookie season (66 tackles, one sack) and Edmonton fans should get to see the continued evolution of Deon Lacey at middle linebacker. A special teams standout for Jones in their first go-round in Edmonton, Lacey stepped into linebacker duties when the Roughriders were hit with their pre-season rash of injuries. With 54 tackles, four sacks and a forced fumble, he showed that he belongs.

The Elks’ backfield will be another area of interest in training camp. Aaron Grymes provides a veteran presence, having now spent six of his seven CFL years in Edmonton. The Roughriders moved on from Ed Gainey in free agency and Jones quickly pounced on the sticky-fingered vet, hoping for more of his productivity in Green and Gold this year.

He’s not on this chart, but fourth-overall draft pick Enock Makonzo could figure into Jones’ plans this year as well. It’s sometimes a lot to ask of a rookie to step into consistent reps, but the Elks seem confident in the guy the took after trading down in the draft.

As any quarterback or rival offensive coordinator will tell you, one of the hardest things to do in the CFL is attempt to figure out what Chris Jones is thinking, or what he’ll have his defence try this year. From the return of Duron Carter, reportedly suiting up at free safety this year, to seeing what Jones might have one of his favourites, Tobi Atigha try this year, or what that linebacking corps as a whole is capable of, watching Jones’ defence — and to a larger extent his teams overall — try unconventional things is part of the fun of watching him work.

It may not all come together this season, but over his 18 seasons in the CFL, Jones has demonstrated that he knows what he’s doing. The winds of change are blowing in Edmonton and they’re not nearly as difficult to endure as they were in November.