Ferguson: A Training Camp wish for every team 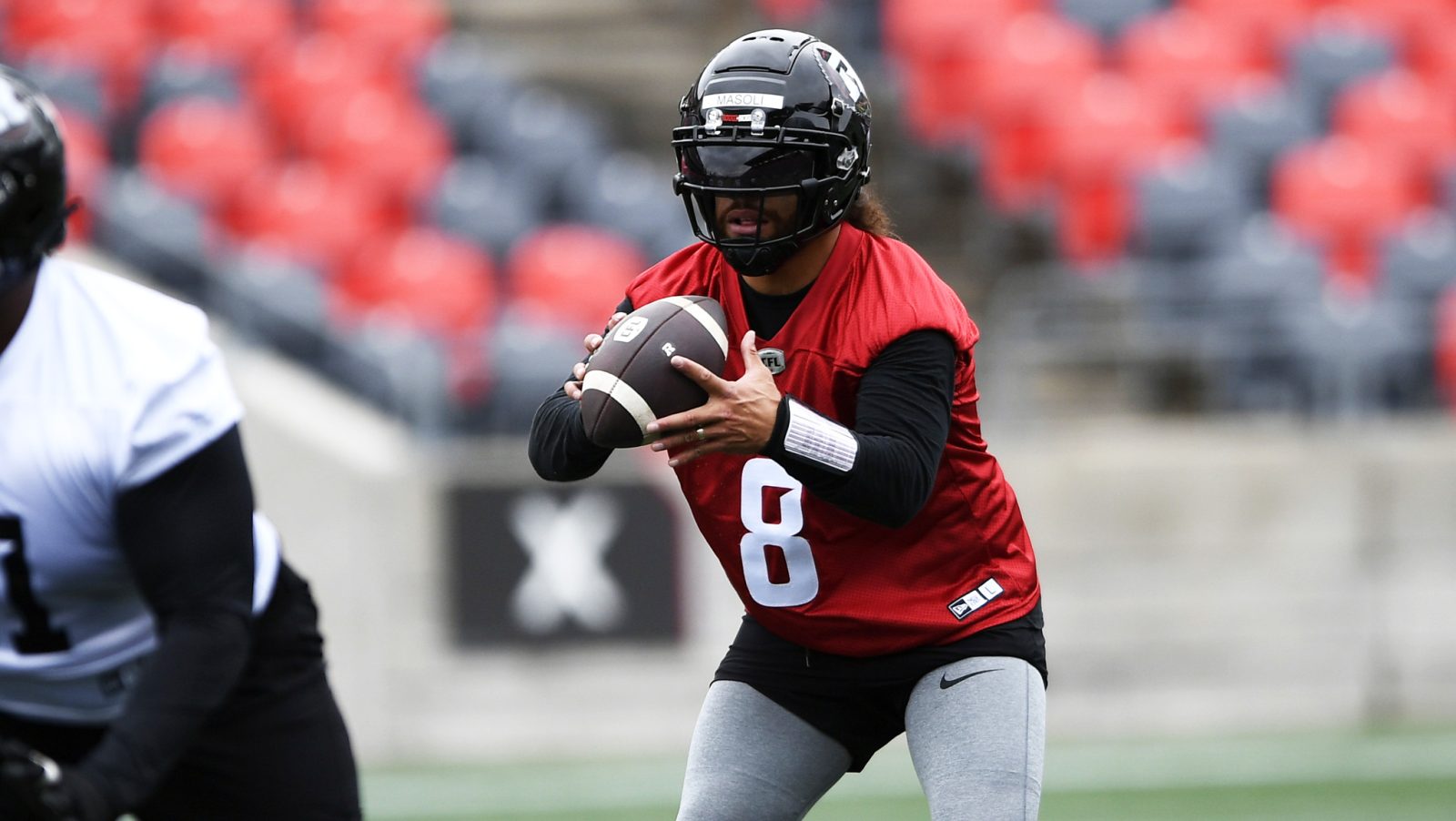 Ferguson: A Training Camp wish for every team

What a rush, eh? Welcome to 2022 CFL training camp, a fitting beginning to yet another season unlike any other.

The last time we played football, Brandon Banks and Andrew Harris were competing for a Grey Cup against each other in Hamilton and Winnipeg, respectively. Now they’ll play together in Toronto.

The Edmonton Elks went from a directionless squad to one with a clear vision and Ottawa went from offensive talent deficiency to potential points oozing like sap from the edge of every REDBLACKS wood cookie.

RELATED
» Football is Back: Training camps kick off across the country
» Nye: A name to follow in each team’s camp
» Everything you need to know ahead of training camp

TC Through the Lens: New faces in new places

Needless to say the changes have been endless and we’re all sorting through what they mean through the first couple days of training camp overload.

Every year when training camp opens up I think back to how much has changed since we last hit the field, with multiple draft classes – including future picks from 2021 – hitting the field and so many fresh faces looking to carve out their role the excitement and possibilities are endless.

With that in mind, here is my one big wish for each CFL team as we thunder through training camps and head for the first live reps next Friday in Ottawa as the Argos enter TD Place!

With Canadian QB Nathan Rourke taking over the Lions offence from Michael Reilly, the Lions are unquestionably a team in transition, albeit one with major upside and a huge advantage at receiver with Lucky Whitehead and Bryan Burnham supporting Rourke’s development.

With all sorts of talent and unique personnel on offence like Jevon Cottoy, my wish for the Lions – because in full transparency I want so badly to see Rourke succeed – is to refine, refine and refine again. Give Rourke the best chance possible through camp to discover favourite calls in certain situations so that on game day he can be a game breaking talent to inspire Canadian passers around the country.

Edmonton Elks – Give Gavin his due

With the recent release of receiver Tevaun Smith, there seems to be a vote of confidence for the likes of Shai Ross, Mike Jones, Danny Vandervoort, Chris Osei-Kusi and more, but Gavin Cobb is the real head turner here.

From Simon Fraser to Manitoba and the Western Regional Combine this past spring, Cobb advanced to the National showcase and dominated. If I’m Edmonton, I give him every opportunity to prove all the hurdles he’s jumped to get to camp aren’t a fluke and see if he can continue to overcome his relatively small frame and separate for explosive plays.

When I think about Calgary Stampeders teams of the past decade they have been aggressive, dominant and willing to throw it all over the yard before punching you in the mouth with an underrated ground game.

My wish for the Red and White this camp is to re-establish that aggressive spirit while leaning on QB Bo Levi Mitchell to jump from talented and successful passer to all-time leader as he lifts all aspects of Calgary’s game by giving everyone on the game day roster confidence that no matter what, Bo can lead the Stamps back to the top where they’ve spent so much of his career.

Cody Fajardo has a lot of pressure, personal and professional, this year. From being an expectant father to spending his second year in an offensive system that saw signs of life in the short and intermediate ranges but completely lost the plot on big pass play attempts, Cody is king in Regina. Their success relies on his ability to take the field every drive with an undeniable confidence that screams, “we’re the Riders and no matter what you think we’ll be here ready to battle for a full four quarters.”

How do they accomplish this? Take concepts and receivers he meshed well with last season and grow the surroundings that create the greatest amount of success. Fajardo plays the game fast mentally, but ironically it might be his ability to slow down, relax and see the full field at a higher level that leads to team success. 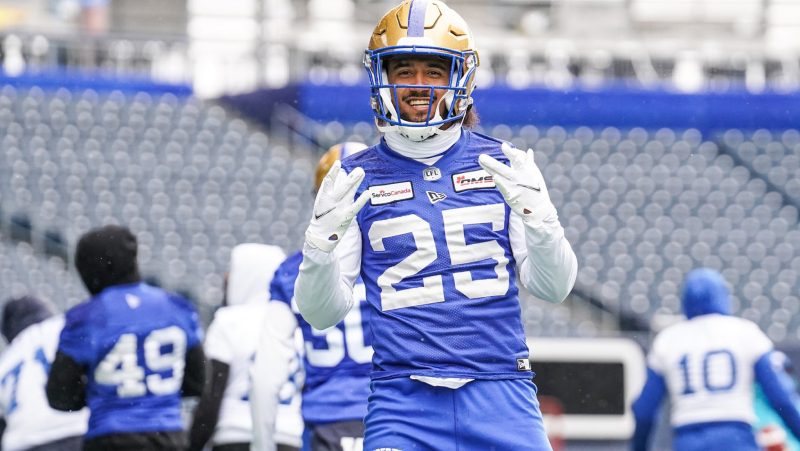 Tyrell Ford hit the field for his first day of practice on Friday (BlueBombers.com)

When Winnipeg drafted defensive back Tyrell Ford I didn’t see the immediate fit, but as a Bombers member told me the morning after the draft, “yeah, I’ll just sit around and not take the special athlete with a ton of upside as a person and player? No.”

Now with Ford in house it begs the question of where he’ll be used. Early indications are he, and former draft pick Patrice Rene, will get a real look at corner. My wish is to forget the status quo of Canadian roster usage and put these guys anywhere you can so they can make plays. Bombers execs won’t regret it and fans will quickly come to love them both on special teams and defence.

In 2021 Jake Burt was drafted first overall then disappeared. By all accounts Burt has started camp strong and needs to be embraced. If all the accolades and promise Hamilton espoused after making the selection are true we should have a unique game changing talent on our hands that could quickly make Black and Gold fans forget about the Mark Chapman draft pick just a few years earlier.

Much like the Argos defence of 2021, the Double Blue offence of this season feels like they could go young or old, run-heavy, or have one of the more explosive passing attacks in recent memory, if everyone is healthy.

My wish for Toronto is to carve out not just who you are right now, but who you really want to be when the weather cools and the games determine your fate. It’s great to be able to do everything, but the best attacks in this league have a true identity and Toronto needs to define that in a way no Argos fan can be confused.

Your guess is as good as mine for where Ottawa lands in the standings this year with so much turnover at major positions, but why do we have to label and project everything? Go for the ride and enjoy every second!

My wish for Ottawa and their fans is to open the playbook, open your mind and open your presumed realm of possibility to include anything and everything you can imagine in 2022.

Masoli as MOP? Sure.

First place in the East? Why not.

The sky is the limit with the group in place now, let the games begin in a whole new era of big, boisterous football in Ottawa.

In Montreal, Chris Ackie is arguably their best defensive player right now, and first overall pick Tyrell Richards has joined the fray. Montreal needs to follow the example of BC and release these two side by side to use their unique length, size, speed and football IQ to make life tough on opposing offences every week!