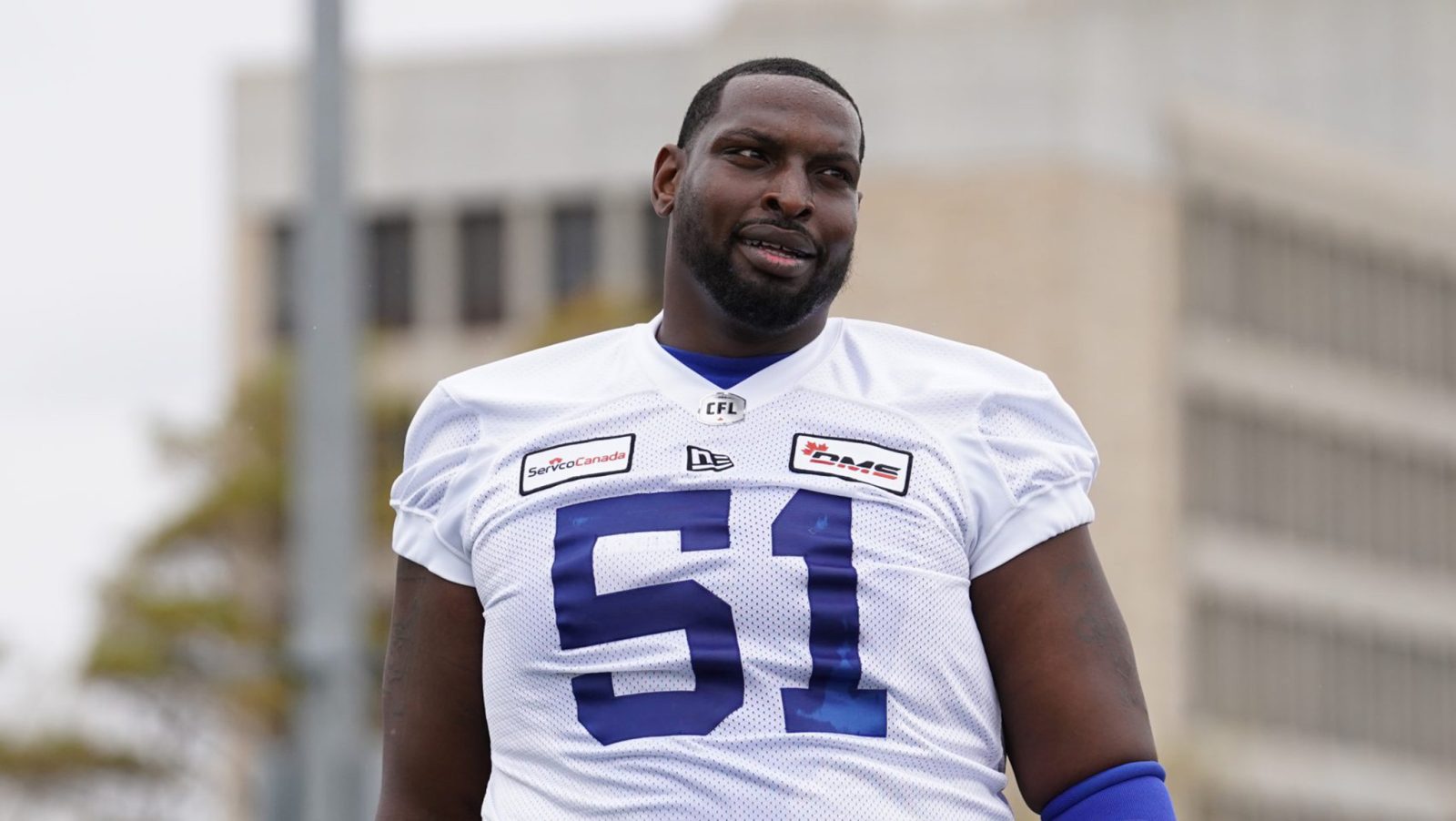 It was damp, it was chilly, and the grey skies certainly could have given a funereal feel to the first day of Winnipeg Blue Bombers training camp. And yet there was veteran right tackle Jermarcus Hardrick after a 2 ½ hour practice grinning like, well… let’s have him paint the picture:

“It’s almost hard to put this into words,” he began, “but I would say it’s just like a kid who has this dream over and over again of these toys, and he knows he’s going to wake up and see all these presents under the tree. Day 1 of training camp… This is Christmas for me. I knew there were going to be presents, and there’s a lot out here. I’m just so excited.”

That seemed to be universal as the Blue Bombers got to work four days after the scheduled opening of training camp. There were back slaps and bro-hugs, high fives and fist bumps. Day 1 was loud, and it was emotionally charged.

“It’s great because I know how much everyone wanted to get out here and play football,” said linebacker Adam Bighill. “We’re at the point now where guys are out here doing what they love to do and what I love to do. That’s the great part.”

“Any time you have the opportunity to come out here and play football it’s a special feeling. And obviously after missing the first couple days of camp it just makes it that much better when you do get out here because you know how important this is to everybody.”

“It’s been pretty exhausting because of the amount of responsibility, the amount of work, the amount of time and the amount of focus. It’s not easy and I wanted to bear that burden for the guys and try to make this league a better place and be a part of that. To get to this point, it’s all worth it.”

And when the players did get back on the field, some of the familiar sights and sounds instantly set in – including Willie Jefferson leading the pre-practice chant, and with Rasheed Bailey and Winston Rose picking up with their daily trash talking routine.

“That’s just the way this team does it,” said Hardrick, who is hardly timid in the trash-talk department himself. “We compete with each other, and we want to be the toughest, we want to be the closest. It creates a love for eachother right from Day 1.

“What I liked in the days before this was it was hard to get here and then wait, but we have a lot of great leaders. We didn’t have the coaches, but we did everything right. We lifted together, we ran the practices, watched film together… It was normal, just without the coaches. I credit the players, the leaders on this team. I was talking to some guys on other teams, and they were just chillin’ around. That says a lot about the leaders here and I hope I’m one of them.”

“I feel like the sky’s the limit,” said Bighill, “We’ve got a lot of great guys that have been around here and won Grey Cups and we brought a bunch of new great guys into the fold. It’s time to find out how everybody fits together. Every year is a new journey and you’ve got to go take it and earn it every single year and that’s no different now.

“This is a building process. We haven’t done anything. This is where we need to come out and continue to remember that and earn it every day.”