A Part Of Change: Obby Khan shares his journey from the CFL to politics 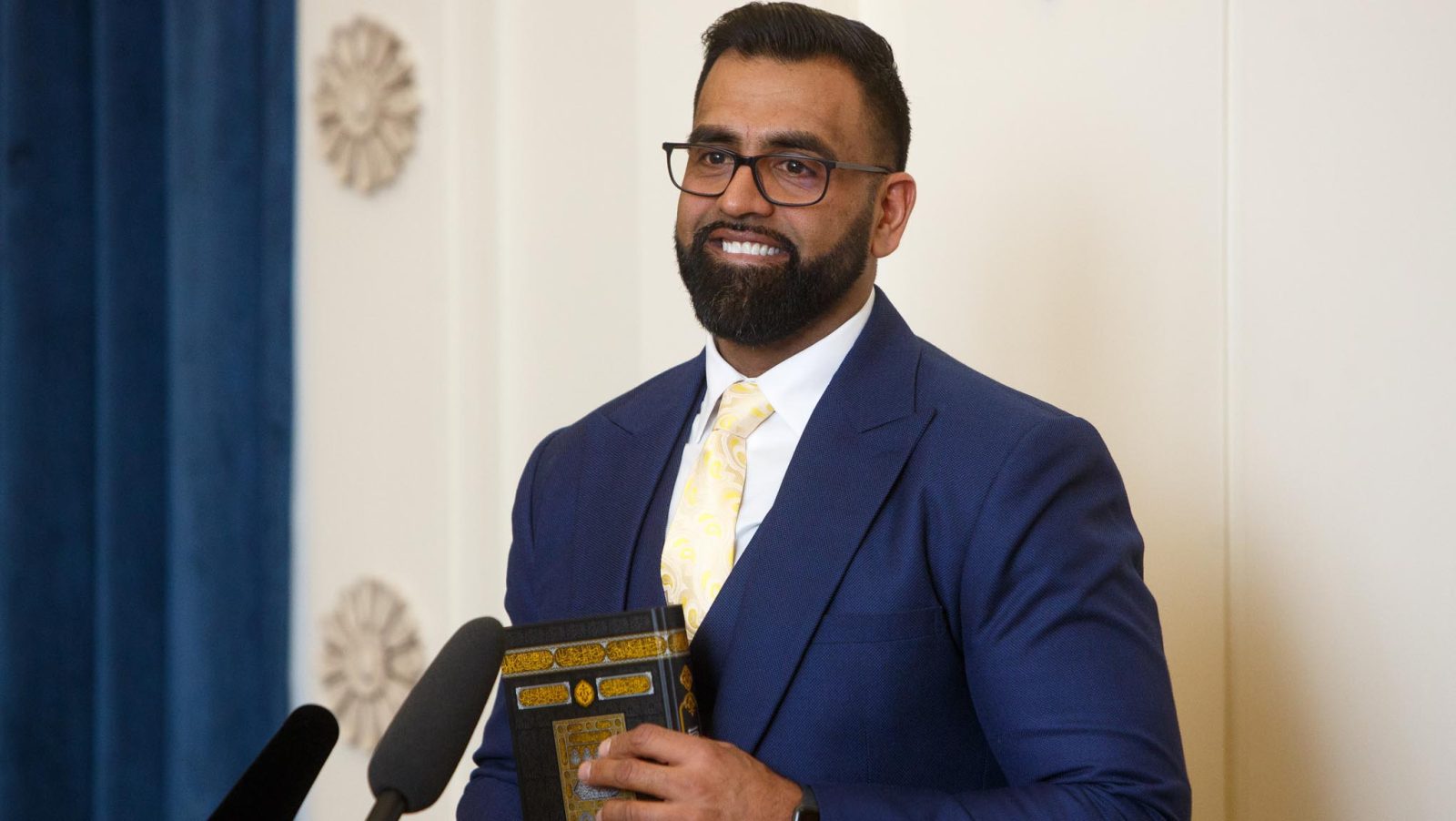 A PART OF CHANGE: OBBY KHAN SHARES HIS JOURNEY FROM THE CFL TO POLITICS

Ibrahim ‘Obby’ Khan enjoyed a nine-year career in the CFL as an offensive lineman. Since retiring, he’s settled in Winnipeg, where he played six years for the Blue Bombers and has since launched a number of businesses in Winnipeg that include four Green Carrot locations and three Shawarma Khan locations, with another three at IG Field. In 2022, he became the first Muslim MLA in Manitoba to be sworn in to represent the Fort Whyte Riding in Winnipeg. As part of Asian Heritage Month, Khan shared his story on how he made his way into politics and the world he envisions.

There are few moments in your life where you’re fortunate enough to realize just how big they are as you move towards them, that they’re going to be significant, these are moments you’ll keep with you for the rest of your days.

I’ve been lucky enough to have a number of them over the course of my life but even more recently.

On April 4, 2022, I was sworn in as the MLA for the Fort Whyte riding in Winnipeg. It was the culmination of months of hard work from my incredible team (I’ve always got a team, even in my post-playing days). We knocked on literally thousands of doors, called thousands of people and handed out thousands of flyers. Making it through a campaign, that was one of the hardest things I’ve done. Sitting at the legislature just over a month ago now, it felt like everything had come together. After my years of hard work on the football field, building my businesses and giving back to the community, now I could represent my neighbourhood and continue trying to make Manitoba an even better place to live.

My family had made the trip from all over North America for my swearing in ceremony, but my mom and older brother were delayed coming from Ottawa. After the stress of their initial flight being canceled the night before, they ended up landing that morning, just five minutes before my ceremony was to begin. My colleagues at the legislature and the Premier were good enough to delay the start of the ceremony until she arrived. I remember one of my colleagues saying, “There is no way we are starting this until your mom gets here.  She gave birth to you, we can wait an extra 30 minutes!” That meant the world to me.

That in itself is one of those moments that will stay with you forever. A point in time when your family gets to see you take a seat at the table, the highest table in Manitoba, and have a voice in shaping the future of your community. As I readied myself to be sworn in, I looked down to my hands and had another moment.

A good friend had gifted me a beautiful copy of the Qur’an, the Holy book of Islam. I felt the weight of this moment in my hands as I carried it up with me to be sworn in. I was holding history. No Manitoban MLA had ever used the Qur’an to take the Oath of Office. Not until Monday, April 4, 2022.

Now we’re into May and it’s Asian Heritage Month. It definitely resonates with me a little more this year, given what has happened and where life has taken me. But that feeling I got while holding the Qur’an this month is also now present with me every day. In how I view myself when I walk around, when I’m just representing myself as a Pakistani Canadian Muslim, even just walking down the streets. I realize that I have this weight of representation on my shoulders everywhere I go. I always felt this pressure on me as a six-foot-four, 310-pound, Pakistani Muslim football player waking around, but now I feel it more. I (we) can shape the future for all kids but now for kids that look like me, come from where my family came from, believe what I believe and so much more. The future of choices is now in their hands. I can do it, so can you!

So whether it be Asian History Month, or any other month, I realize that when I’m doing things, I have that responsibility, that onus on my shoulders to represent my community, my constituency, my people and that’s just a constant. But you know, I relish those moments.

I wouldn’t have been a CFL player if I didn’t take the responsibility of my actions, of snapping the ball to Kevin Glenn, or whichever quarterback I was honoured to play with in front of 30,000 fans at CanadInns stadiums. That responsibility of doing my job on a team of 50 young men that counted on me play after play. Now I have a new team in government in which I am no longer snapping a ball but working with my new teammates to shape a better future for all Manitobans. I love it. And I love thesethis moment here. I love it, and I love these moments here. 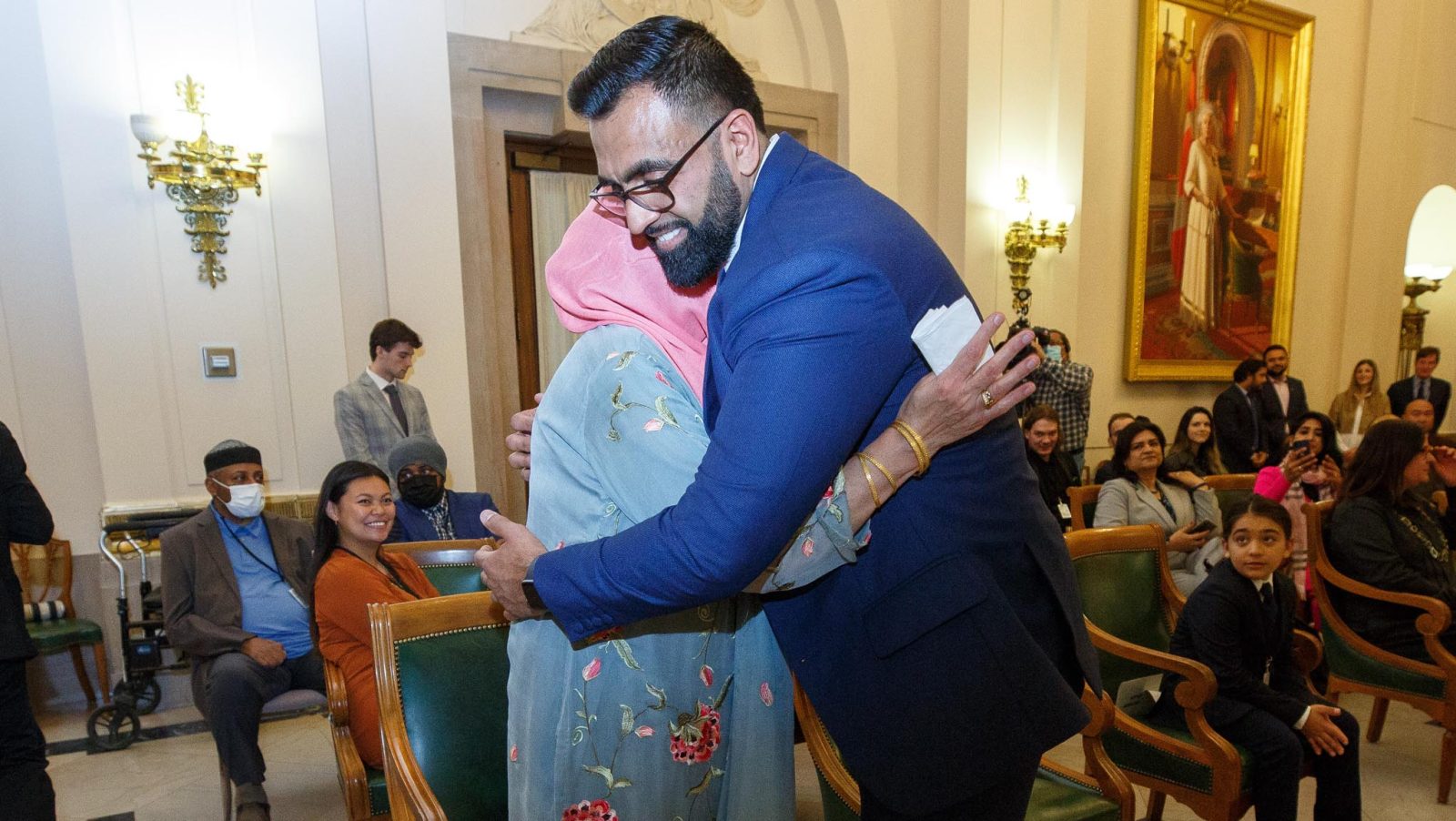 When I retired in 2012, I knew I’d be staying in Winnipeg. You look to redefine yourself at that point in your life and Winnipeg was a godsend for me. It has a huge fan base, a huge support base, a market with so much potential and the stars kind of aligned on all of that.

I was well known and for the most part I think I was well liked.

So I decided to start a business. That really catapulted me to success in the restaurant world because we opened and we had about 200 people on January 21, 2013, waiting outside in the freezing cold to grab the first Wrath of Khan Shawarma (our store’s signature wrap).

As I built my businesses, I continued to stay involved in the community. I’ve always given back to the community, that was a lesson ingrained into all of us as kids, always give back and be grateful for what we have. I realized early that the community was the one that was supporting me on the football field. It was the community that supported me in the restaurant world and now it is my time to support and work for the community through the Manitoba Legislature.

It’s been nine years of owning restaurants and giving back. The restaurant world helped me transition to being involved in the city and then from joining boards, to the Winnipeg Chamber of Commerce, to Winnipeg Harvest, to Travel Manitoba and Restaurants Canada. It was always about giving back to the community.

Fast forward to where I am today and it was a natural progression into public service. I have kind of done this my whole life. I asked myself, how can I give back more? How can I continue to make an impact on our community that we live in? How can I do good? When I saw that there was a seat available in the riding of Fort Whyte, which I live in, after the former Premier had stepped down it felt like this was the perfect timing, the perfect opportunity and again the stars aligned. So let’s make this jump and hopefully make the greatest impact I can make to the community. 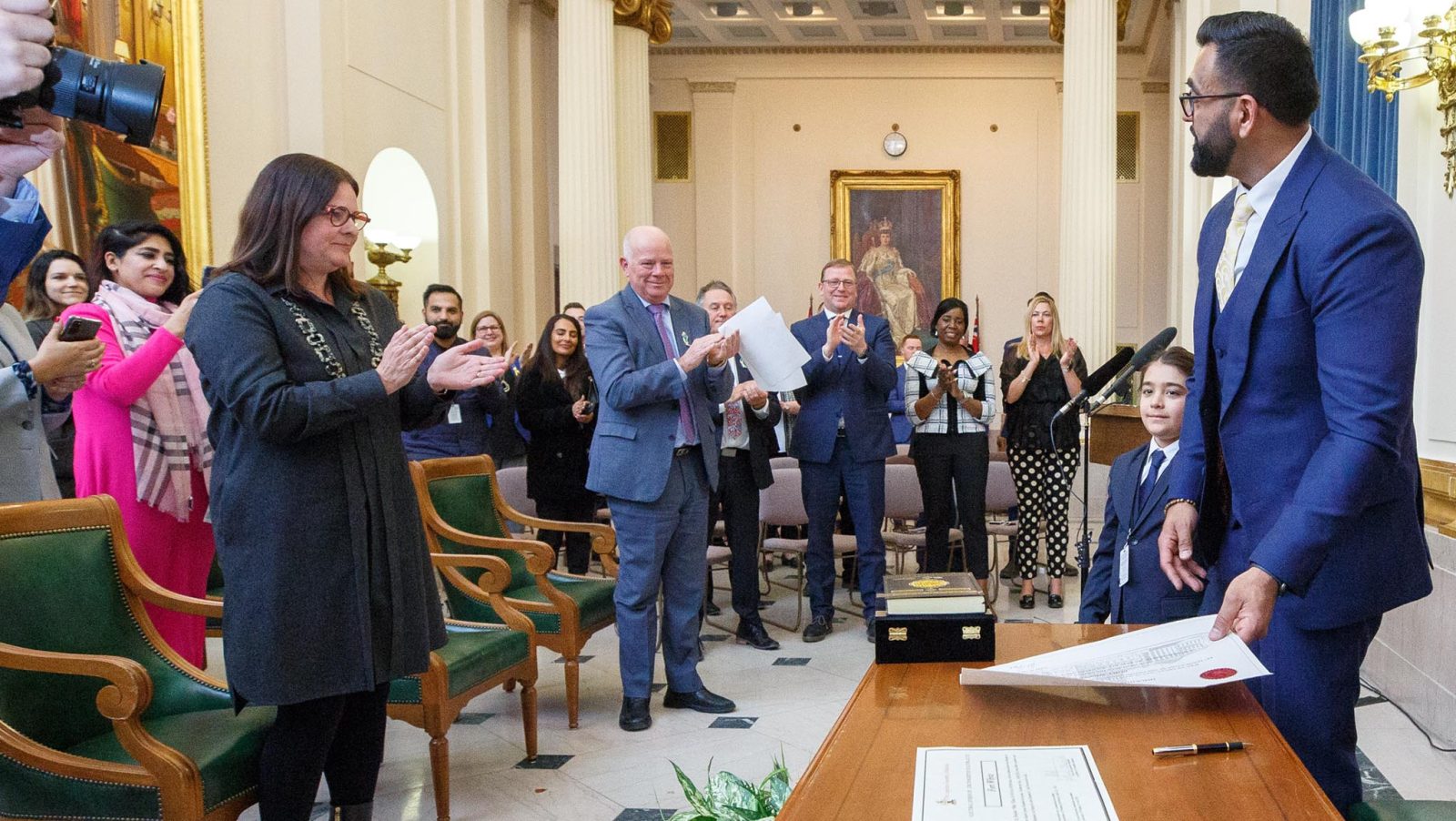 Obby Khan, with his son Sufiyan Morrish-Khan at his side, after being sworn in as Manitoba's first Muslim MLA (Photo: The Canadian Press)

People ask me what’s next a lot.

Really, I’m not sure what my bigger aspiration is yet and I think that’s OK. I think right now I’m just learning the ropes. I’m drinking from a firehose, as they say. It’s such a different pace and knowledge from entrepreneurship to politics. So I’m learning all the procedures, how things are done, the rules, “the politics” if I can say that and much more.

My greatest aspiration at this moment is to just make Winnipeg and Manitoba a better place for everyone; a more inclusive, more diverse and more represented place, with more equal rights and equality across the board. Whether that’s socioeconomics, religion, gender, whatever you look at, I really want to make things better. That’s my ultimate goal.

I can tell you about a moment where I’ve felt the possibilities of the impact that can be made. It was Eid, the feast that Muslims have at the end of Ramadan, on Monday, May 2.

Obby Khan: From CFL offensive lineman to the Manitoba legislature

They asked me as the first Muslim MLA to say a few words in front of about 11,000 people in Winnipeg.

When I got up to the podium in front of these 11,000 people, all I saw was kids. I knew there were adults there with their kids but for some reason my brain just went to the thousands of kids that I could see sitting there, just listening to every word I said. To know that you have that impact on those kids to say, ‘Hey! You can do it.’ I remember pointing out a few kids, saying, you can do it, and you can do it. Those moments are the ones that truly stand out.