TORONTO — The Canadian Football League (CFL) and its nine member clubs have a simple, but powerful, message for fans, supporters and partners this season: Let ‘Em Know.

From those flying the league’s banner in Halifax – the site of the 2022 edition of Touchdown Atlantic – to fans across the country’s CFL cities, ones in Indigenous communities dotting the northern coast, those west on the shores of the pacific, everyone cheering from the hometowns of the league’s American players, and ones from the league’s partnering countries in the International Alliance of Gridiron Football: Let ‘Em Know. 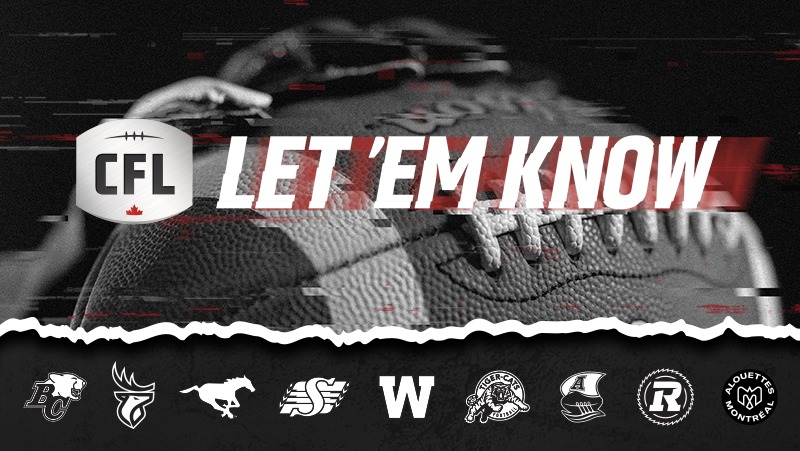 “After two tumultuous years caused by the global pandemic, this is our rallying cry,” said CFL Commissioner Randy Ambrosie. “Let ‘Em Know is more than a call-to-action; it’s a show of pride shouted from the rooftops and it’s a challenge to our passionate fans, our world-class players, our amazing clubs and our incredible partners. We’re proud of this league and we know you are, too.

“This season is our opportunity to don our colours, show that pride, and open our great game to new fans and new possibilities.”

The season-long campaign was developed in partnership with Toronto-based independent creative agency trevor//peter, whose past work in Canada includes collaborations with Diageo, Red Bull, Nike and more. The creative direction was informed and validated by the CFL’s work with global marketing research firm, Hotspex, whose clients include TikTok, RBC, and Under Armour, amongst others. Their in-depth analysis served as the basis for the league’s largest and most comprehensive brand audit.

“We set off to better understand our fans and Let ‘Em Know is the first step towards the culmination of that journey,” said Tyler Mazereeuw, Chief Revenue and Marketing Officer of the CFL. “Our research and insights show a fanbase that’s fierce in their loyalty and they’re ready to roar. Let ‘Em Know sets the stage for them to be heard.”

The voice of the campaign will be Edmonton-born, Toronto-based rapper, producer, writer and poet, Cadence Weapon. The former Poet Laureate of Edmonton (2009-2011) and the winner of the 2021 Polaris Music Prize for his album Parallel World speaks for a generation through incisive, socially conscious lyrics, while serving as a bridge from past to present for CFL fans.

“My grandfather and my namesake, Rollie Miles, was a three-time Grey Cup champion in the 1950s and he is a member of the Canadian Football Hall of Fame,” said Cadence Weapon, whose real name is Rollie Pemberton.

“The CFL is in my blood, and it’s also in my heart as a fan of Canadian football. I know CFL fans and I’ve felt their energy in the stands. It’s time to come together, to proudly wear that passion on our sleeves and to Let ‘Em Know.”

The campaign’s reach will extend not only through CFL teams and partners’ digital channels, but also internationally. The first commercial spot for Let ‘Em Know can be viewed here.

The Montreal Alouettes will head west to McMahon Stadium to face the Calgary Stampeders on June 9 as Thursday Night Football officially opens the 2022 season. The Winnipeg Blue Bombers will begin their title defence on Friday Night Football with the Ottawa REDBLACKS in town. A Saturday doubleheader will see the reigning East Division champion Hamilton Tiger-Cats play host to the Saskatchewan Roughriders, before the Edmonton Elks take on the BC Lions to close out Week 1.

All roads – with stops set for Hall of Fame games, Labour Day matchups, a Thanksgiving Classic and holiday contests – lead to Saskatchewan on Sunday, November 20 for the 109th Grey Cup.