Raymond taking his next football steps in Calgary 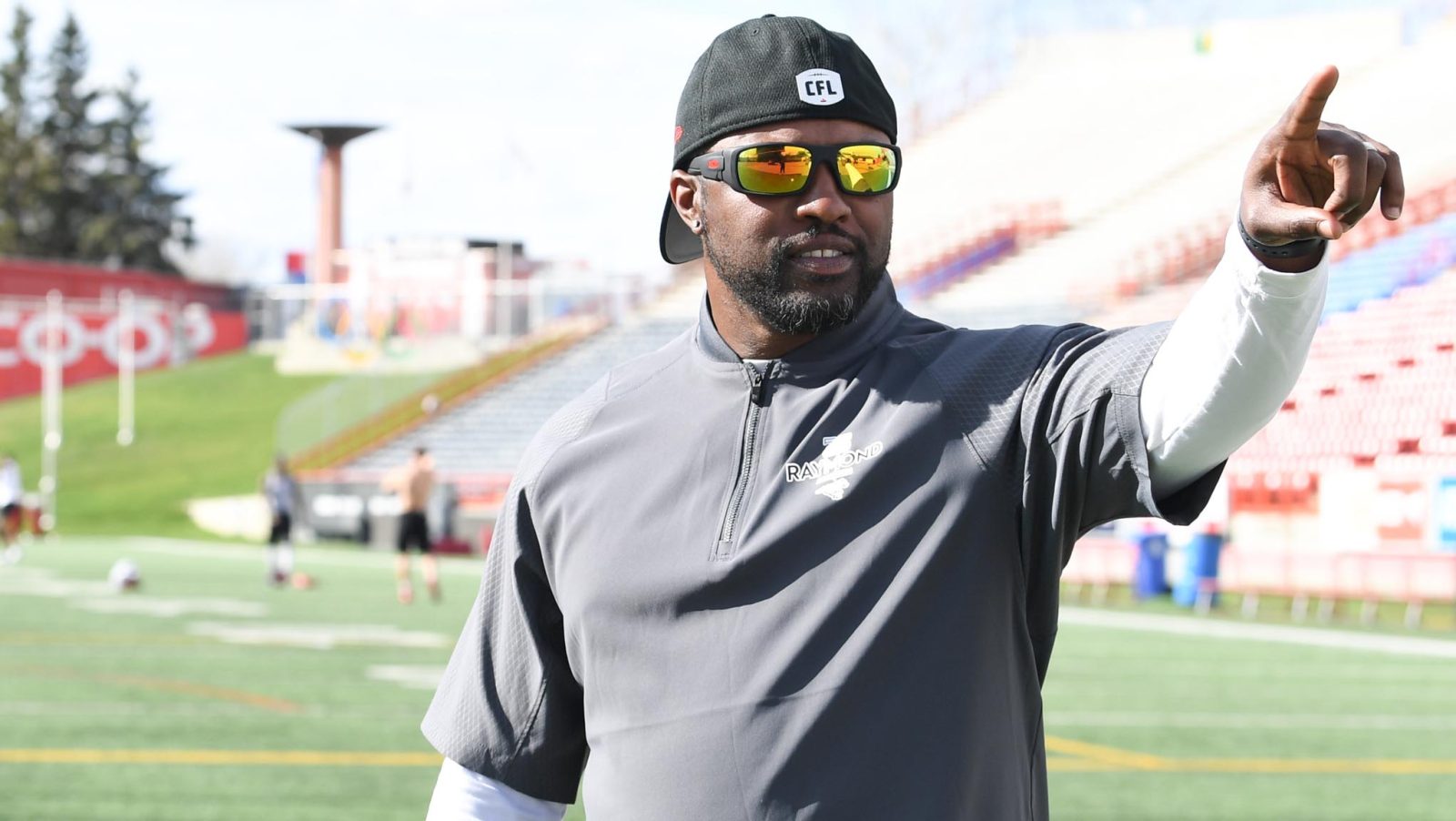 Raymond taking his next football steps in Calgary

The former Calgary Stampeder is one of nine people chosen to take part in the CFL’s Diversity in Football Program, which sees each candidate spending time at a CFL team’s training camp in order to expand their knowledge base and sharpen their skills.

But that’s not the only thing keeping the 39-year-old, two-time Grey Cup Champion hopping these days.

In a football life that has spanned decades and always remained relentlessly tied to the game, Raymond is splitting time between Calgary and Prince George, B.C., where he is the director of football operations and head coach of the Prince George Kodiaks, an expansion team about to jump into its inaugural season in the Canadian Junior Football League.

“It’s another opportunity to help grow the game so I’m excited to be a part of it,” said Raymond, the native of St. Louis who made his way north to Canada to play, back in 2008 and who has stayed ever since, acting as a pied piper for the game of football in his adopted hometown of Calgary and beyond. 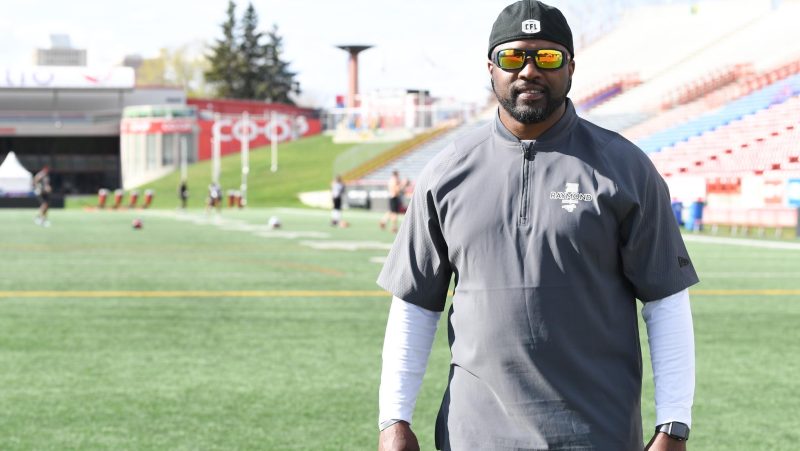 After spending eight years with the Calgary Stampeders, Keon Raymond is back at McMahon Stadium as a participant in the CFL’s Diversity in Football program (Photo: Stampeders.com)

For some the Diversity in Football Program provides the opportunity to make some new connections as they scope out their future pathway in the game of football. For Raymond, though, being matched up with the Stampeders doesn’t provide new connections so much as it allows him to renew and strengthen the ones he’d already forged. Those connections are feeding into his traveling football outreach caravan in positive, game-building ways.

It’s been a happy homecoming.

“When I first drove in and I put my my shoes on and I walked out on that turf again, just a feeling of ‘this is where I belong’ kind of came over me,” Raymond said of McMahon Stadium.

“It was humbling,” he added. “A place where I dedicated a lot of years to.”

Raymond spent eight seasons with the Stampeders as a defensive back and SAM linebacker and he was extraordinary at his job, earning two West All-Star nods (2011, 2012) and gathering up 323 tackles and 24 interceptions in 122 games in Calgary.

He made a lot of friends and earned a lot of fans while he was there and he decided to settle in the Alberta city after one final CFL season split between Toronto and Hamilton, in 2016.

He’d already dug into building a post-playing career that has been sharply defined by his desire to grow the game of football at the grassroots level. He’d already made himself a fixture in the community while he was still playing, the outreach accelerating when he retired.

Raymond coached with the Centennial High School Coyotes and after that moved on to become the head coach of the Calgary Wolfpack of the Alberta Football League, guiding the Pack to a provincial championship in his first year, as well as a berth in the national championship game.

Raymond and his wife, Bianca, founded a youth program in Calgary, too, called K25 Sports. Its focus was and is on getting children and teenagers to be active in sports including, of course, football. The couple went on to introduce and grow a football-specific program called Big Time Players 7v7, a non-contact football league that started with 20 or so players and now, Raymond says, has over 200 involved.

“I just want them to love the game of football,” he said of young, budding athletes.

Last summer, when Kodiaks’ president Craig Briere offered him the job in Prince George, Raymond leapt at it. And then reached out to his old coach almost immediately. 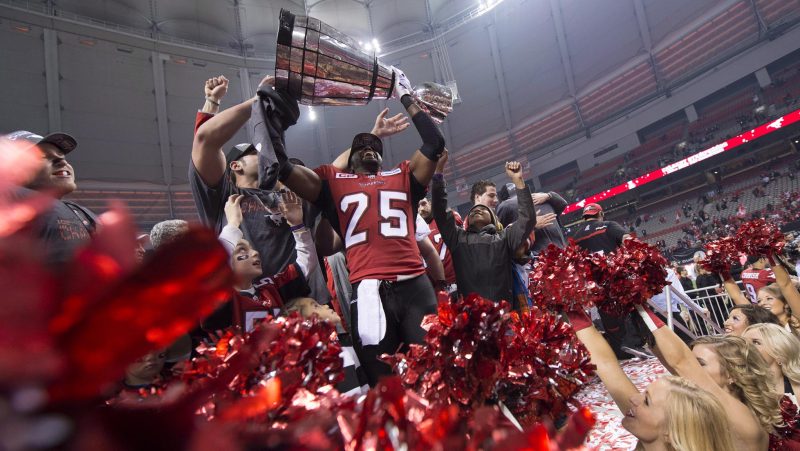 Raymond celebrated a Grey Cup win with the Stamps in 2014 as a key part of the team’s defence (Photo: The Canadian Press)

“The first person I called was coach Hufnagel,” said Raymond of Stampeders’ president and general manager, John Hufnagel. “We sat down and had a nice conversation and he gave me the tools and blueprint of what it takes to be successful.”

Through the Diversity in Football Program, Raymond has been able to reconnect with not only Hufnagel at Calgary’s camp, but also the man who succeeded Hufnagel on the sidelines, Dave Dickenson, who was briefly a teammate of Raymond’s in 2008, prior to joining the Calgary coaching staff a year later. Gleaning information from those two — as well as the other coaches and personnel staff members — is providing Raymond with the opportunity of “sitting down and understanding what the other side of operations looks like.”

“As a player,” explained Raymond, “I was always trying to come in and get ready to go. But now, I’m seeing the concepts behind the scenes that are going on. I’m taking in as much knowledge as possible.
Hopefully, I can implement some of these things into our junior program up here in Prince George.”

Raymond was about to tee-off at the Kodiaks’ fundraising golf tournament when he said that. After participating in Calgary’s rookie camp and the first half of the full training camp, he was back in British Columbia, where the Kodiaks had a busy weekend of activities scheduled and their own spring camp to execute. The prospect of helping to build a team out of thin air is an enticing one for Raymond.

“Not too many opportunities that you get a chance to be a part of something from the ground up,” Raymond said. “I’m grateful for it.”

Sorry to have to miss Calgary’s first pre-season tune-up against the BC Lions, Raymond said he was looking forward to getting back for another week of camp and then taking in the Stampeders’ second pre-season game in Edmonton, next Friday.

He’ll earn even more knowledge that he can put in his football briefcase as his future takes shape, an opportunity for which Raymond is thankful.

“I tip my hat to (commissioner) Randy Ambrosie and the CFL for putting together something like this,” said Raymond. “Of inclusion.

“People who love the game should be in the game,” he said, adding that he was also thinking of the Women in Football Program, which is running alongside the diversity program at CFL camps. “I think that’s the most important part about it. That’s how we get our game to grow.”

Will his future take him back to the CFL? Will his time at the Calgary training camp serve as a catalyst for that to happen? Raymond doesn’t know for certain, but he seems not too worried about it either, happy just to be involved in the game in meaningful ways.

“I’m blessed to be able to be around football,” he said. “It’s something my soul is connected to. Wherever I end up, only God knows. But I’m just grateful that I’m around football within this beautiful country of Canada.”