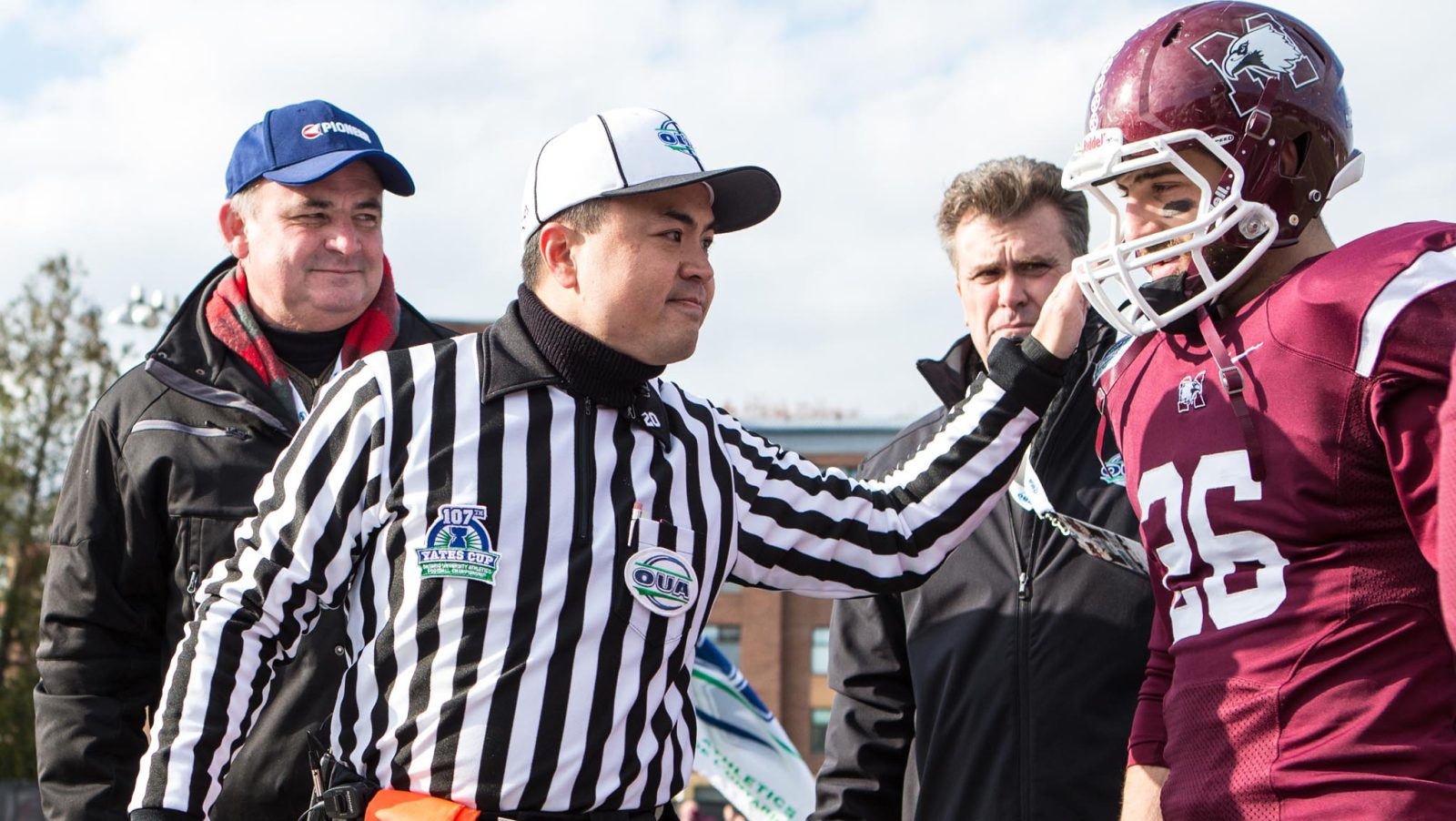 It was the early days, weeks and months of the pandemic and Henry Chiu, like many of us, was taking stock of the world around him.

A 33-year football official with deep ties within the officiating community in Toronto, Ontario and across the country, he didn’t have any football games to work. With that forced extra time, he and his officiating colleagues looked inward.

“One of the very few positive things that came out of the pandemic is it really gave us a reset, a moment to say, ‘Hey, let’s look at this game and not the day-to-day stuff in getting enough officials for any game, (but) for looking at it in a bigger picture kind of way,’” Chiu explained.

“Where are the holes, where are there issues that we can look at and potentially address, because knowing that once everything is back to normal, when we’re just going to worry about the day-to-day, sending the right people (to games), evaluation, things like that, we may not have the proper time to address those. We knew that recruitment and retention has been a great issue for us for a long time.

“When you dive deeper, both from getting enough bodies to officiate and then suddenly you’re looking at what bodies do we need to get and suddenly you’re thinking, wait a minute. Why can’t we have people who aren’t associated with football be a part of this?”

From that reflection, the CFL’s Amateur Officiating Diversity and Inclusion Committee was born. Chiu, who has worked as an official at every level there is in Canada – he’s now an OUA ref with multiple Vanier Cup games under his belt – chairs the committee.

Knowing that recruitment and retention of officials was something that needed to be addressed, bringing some diversity to the officiating ranks hits on a pair of issues that only helps everyone involved in the game.

Chiu recalls his experience of getting into officiating in 1990. In university, knowing he’d hit his ceiling as a player, he got his coaching certificate and looked to get involved that way but was told by his local football association that coaches weren’t needed. He later happened to see a news segment on TV, where a Toronto Football Officials Association member was actively recruiting. Chiu reached out and within the hour got a call back inviting him to join a weekly meeting.

He was the only Chinese-Canadian official working his way into the ranks, but received a lot of support as he learned the ropes of reffing. It was a slow process – he recalls only working a pair of games that first year – but it clicked with Chiu and he wanted to get more involved and grow as an official.

“Even though I only worked the two games, I didn’t really know anybody and was really completely new from the officiating perspective, I really liked the camaraderie and looking at the game from a different perspective,” he said.

Now the president of the Canadian Football Officials Association and having served as a vice president with the Ontario Football Officials Association for a decade before that, Chiu is looking to give back to the craft that’s given him so much in his life. With recruitment and retention of officials an issue even before the pandemic, Chiu wants to do his part to get those numbers trending in a healthy direction. If the new faces coming in can represent the communities we live in, that’s a win two-times over.

“Football is a game that we all love. So naturally, we want more people to be part of it as much as possible,” Chiu said.

“With the changing demographics, myself as an immigrant that fell in love with the game, and how much joy I get out of it, the friendships built, the relationships built…it just makes sense to make sure that other people who are maybe new to the country, maybe new to the sport, get a taste of it.”

Chiu and the CFL’s Amateur Officiating Diversity and Inclusion Committee are trying to identify and remove barriers to facilitate that.

“So how do we identify those barriers and do everything that we possibly can and rally our stakeholders? Chiu asked.

“When I say stakeholders I’m talking about administrators, volunteers or organizers, coaches, governing bodies. How do we identify and try to remove those barriers so that more people can get involved?” 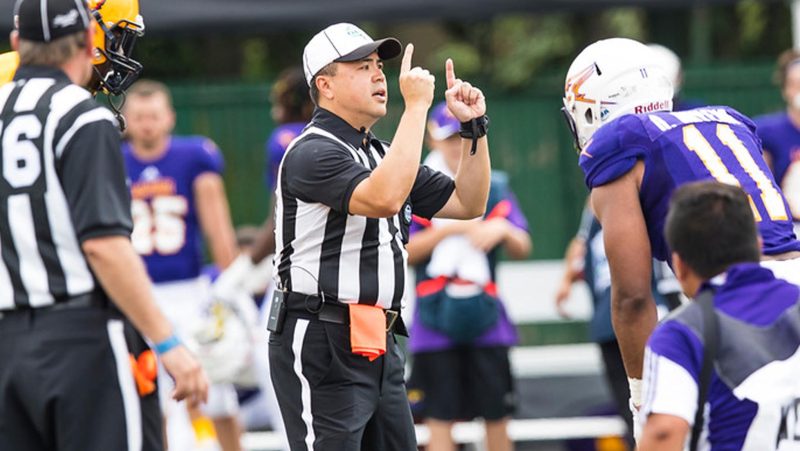 Heading into his 33rd season as a football official, Henry Chiu wants to knock down barriers for aspiring refs as the chair of the CFL’s Amateur Officiating Diversity and Inclusion Committee (Photo: Supplied, Henry Chiu)

Chiu points out that there’s a disconnect between the number of Black football players, which is substantial, and Black officials in Canada. He points to growing numbers of females playing flag and tackle football, but wants to see more women getting involved in officiating.

“How do we get more officials transitioned from (being) players into officiating? We have to identify those barriers,” he said.

“The love of the game is one aspect but the other side, that’s more practical, is that we’re losing officials.

“So really, anybody who has any kind of interest in sports, not necessarily even in football, in sports in general or in being part of a community, that enjoys that aspect of it, let’s make sure we introduce football officiating to this group. Let’s see whether we can first of all, get the foot in the door and try to introduce them and secondly, how do we retain them, to maintain their interest and maintain their engagement?”

As you see in many efforts to diversify, even if progress isn’t slow, it will never feel fast enough. Still, Chiu is taking the time to appreciate change and positive moments when he sees them. He was recently a referee-in-chief for the Red and White Game, which Team Canada uses to select its women’s team that will play in the world championship this summer in Finland.

“We were able to bring in the top female officials in this country to put the crew together to work that Red and White game earlier in May,” Chiu said proudly.” Emily Clarke and Georgina Paull, both of whom have officiated in the CFL, were a part of that crew and said their leadership through the weekend with the other officials was tremendous.

Chiu handled the administrative part of bringing the group together and made sure they connected via Zoom in the weeks leading up to their game, so they had some familiarity with one another. Like the good referee-in-chiefs he’s had, he wanted to allow the crew to focus solely on the game.

“Putting seven female officials from across the country, flying in to do that one game…we’ve come a long way. That’s a positive side,” he said.

“The other part is, let’s move faster. I’m a person that I want to see results. It’s never fast enough for me. But I also understand that in order to continue to progress, you need all stakeholders to be on the same page. Everybody has to be aligned in order for us to move forward. That is a process in itself.

“It’s great, we’re moving forward, we’re progressing. We’re going in the right direction, we just need to continue to make this top of mind so that we can move forward together.”